On February 27, 2013, your favourite fantasy duo, the Skullkickers, are going to be adjectiveless no more. The series is rebranding as Uncanny Skullkickers and readers will have a fresh jump on point with a new #1 issue and a brand new story arc. Jim Zub is the creator and writer of the series and was kind enough to take time out of his schedule to discuss the new arc and what is in store for our skull kickin’ pals. 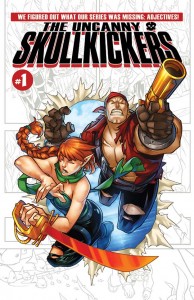 Aaron Long: The next issue of Skullkickers (now Uncanny!) marks a new #1 for the series, and a new jumping on point for readers. As the series goes forward, is it difficult to maintain accessibility for new readers while also satisfying readers who have been around since the beginning?

Jim Zub: The concept of “mercenary monster hunters get into big trouble” at the core of the book is really easy to pick up on, so I don’t really feel like the series has ever been inaccessible, to be totally honest. Modern comic readers want to start picking up a series at “the beginning” as much as possible and we’re giving them a chance to do that while keeping the story momentum going from our previous 18 issues.

Skullkickers has always been a fun and accessible adventure comic. Now it’s one with a spiffy adjective in the title. There’s a quick recap at the start to get everyone up to speed and then we launch right into it.

I’m hopeful people will give it a shot and jump onboard.

If readers want to know what Skullkickers is all about, we’ve been serializing the early issues absolutely free online starting from here:
http://skullkickers.keenspot.com/d/20120123.html

I’m hopeful people will give it a shot and jump onboard.

AL: You’ve taken the heroes of Skullkickers to a lot of different places, including the Wild West and the high seas…can you give readers a hint of where they will be off to and what they’ll be up against in Uncanny #1? 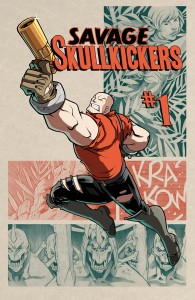 JZ: Each story arc of Skulkickers has focused on a particular pulp/fantasy setting as the backdrop for trouble and this story arc takes that to a new level with jungle and explorer-centric ideas at its core. Mutant apes, crazed snapping turtles, ancient curses and buried relics will be making their way into the mix.

JZ: The next Tavern Tales, “Savage” or otherwise, is slowly getting pulled together with a top notch line-up of comic talent involved. I can’t get too specific right now, but I will say that the stories will be focused on each of the core cast before they first met back in issue #1.

AL: You’ve worked with Edwin and Misty for quite awhile now, has your creative process changed at all? Are you working full script, or a form of the Marvel method?

JZ: I’m still writing full script. It’s what I’m most comfortable with and what the team is used to working from. It’s definitely easier than when we started because we’re more comfortable with the characters and the bigger plan of where things are going with the series. The characters feel more defined, the way we deal with action and humor is figured out and I can do subtle callbacks to elements from the earlier issues without having to rewrite the whole thing.

Finding the right people to collaborate with is an absolute joy.

AL: You were recently announced as the writer of Birds of Prey for DC. I have to know…in a good-old-fashioned-no-holds-barred throwdown, who wins? The Skullkickers or BoP?