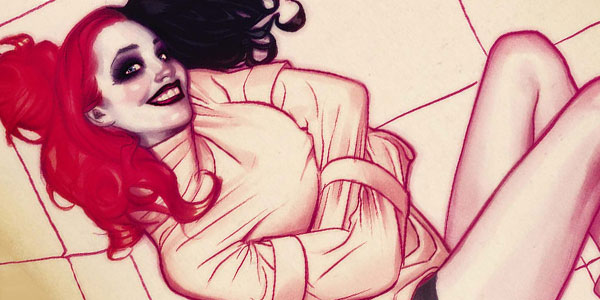 One of the biggest surprises yet of 2014 has been the mad success of Harley Quinn — DC Comics’ brand new ongoing series starring the anti-heroine of Batman and Suicide Squad fame. Not only has the book debuted and remained as the comic market’s highest selling female-led book, but the first three issues have remained solidly in the Top Ten of all comics, rubbing shoulders with Batman, Justice League, and Spider-Man! Co-writer Jimmy Palmiotti took time out to chat with us about the book’s immediate success, Harley’s outlook on love, and what the writing and art process on the book has been like so far! 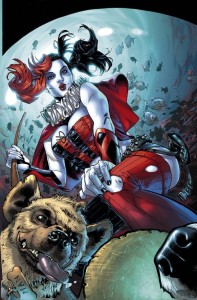 Matt Santori: First off, a huge congratulations on the sales success of Harley Quinn! Debuting AND staying in the top 10 is outstanding for any comic, and especially gratifying for a female-led title. Why do you think the title is resonating so thoroughly with so many fans? What’s your secret?

Jimmy Palmiotti: I think the character has become more and more popular over the years and it was all about timing and execution. When Dan DiDio approached Amanda and I about the possibilities of doing the book, we came right out and said we wanted to do it our way, and pitched the book exactly as it is today. I think the overall mission of the book, as far as tone, is fun and madness. Amanda and I, we play a game of trying to top each other while writing, to see who can push the scene the furthest. What we can’t believe is that the book has been in the top 10 each month and the reorders are insane. We are just happy so many people seem to be enjoying it.

MSG: Issue #3 tackles a topic pretty close to Harley’s heart — love, in the midst of Valentine’s Day. We’ve long seen Harley pining for her Mr. J, and see a little bit of that, but how do you see their relationship today in light of the events of Death of a Family? Is there room for another man (or woman) in her life in the future? 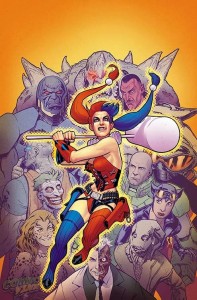 JP: Harley will always have a “thing” for the Joker, but she has to move on like the rest of us do and try to find someone else to bring into her life. We will be exploring the possibilities of her falling in love again over time, but right now, and especially in issue #3, she is missing the attention and feeling left out. Valentine’s day is a cruel holiday for those without loved ones or special people in their lives. It puts a giant bull’s-eye on those without a significant other in their lives. It’s probably why I don’t like the holiday. I have my valentine, but have a ton of friends still looking for theirs. In this issue, Harley tries to not let it bother her, until it bothers her too much.

MSG: Although she doesn’t appear in the issue, Poison Ivy plays a big role in setting up Harley’s predicament this month. How do you view their friendship and why does it work so well in your eyes?

JP: They are both considered villains and have that in common, as well as both of them not viewing themselves that way. I think there is a drive to both of these characters that gives them a lot to have in common. I view Ivy as a bigger sister to Harley and a good friend to her. They play into each others madness on a level most couldn’t understand and when together, it’s always an amusing time.

MSG: As we’re slowly being introduced to the new supporting cast in Harley’s building, it seems odd that none of them are all that concerned with rooming with a reputed serial killer. Is this just a case of suspension of disbelief or is there more to it than that? 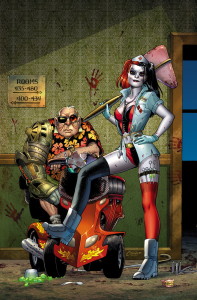 JP: We surrounded Harley with people that sort of walk the same beat as her in a weird way. They are a bit off the normal track and stay true to who they are. They also don’t see the threat that we see and as early as issue one, we see Big Tony kill someone dead in front of Harley without hesitation. The roller derby friends and the senior’s home staff, on the other hand, are slowly learning this issue by issue and that’s where the fun begins. Amanda and I approach the book always with some suspensions of belief here and there because making it grounded like we did; we have to push the insanity button to keep it fun and moving. I think we found an interesting mix of both in here.

MSG: As you and Amanda are both artists as well as writers, I wonder if the working relationship with series penciller Chad Hardin is a little different than it would be otherwise? How are you finding the collaborative process?

JP: Chad is wonderful. Amanda and I cannot resist art directing him a bit in the script, but I also think it’s to his advantage that we know what we are going for in the panel and set up, and the collaboration has been wonderful. Chad nails it 99% of the time and it’s why we chose him in the first place. If Amanda and I have actual notes for him, it’s usually focused on the small details. We are both detail-oriented people and think the reader always caches these things. Amanda is almost obsessive about things at times, but in the end, you can see it on the page. I cannot tell you how pleased we are with his work and the coolest part of this is his work is getting better each issue. We are watching an artist’s style evolve a month at a time. 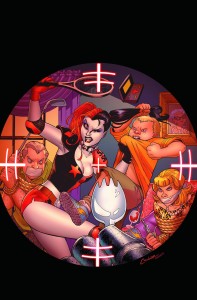 MSG: What’s the writing process between you and Amanda like when you’re breaking down an issue and writing out the gags, and do you find writing humor — and this book is hilarious as all get out — to be harder than straight adventure?

JP: Since we are a couple, we are always together and we talk and talk about what we want to do, take a ton of notes and then regroup when we send in the outline. Once it is approved, I get to work outlining and breaking down the story, going to Amanda to pitch a new scene or idea all day and night. When I am done, I hand it off to Amanda and she adds what she wants and I leave some panel breakdown for her as well. Once she is all done, I get it back, give it a once over and send it to our editor Katie. As it is being drawn we see each page come in, and when all in, we match the art to the script and send in a final script for lettering. Once the lettering is done, we get that, and dissect and add or remove what we want, and it goes back again. This goes on once more till we finally sign off. We drive Katie insane because we keep editing till we feel its perfect as we can get it.

As far as the humor, we probably like writing humor way too much and act like two teenagers with our silly sense of humor. It’s why the book can be really stupid silly at times. If it cracks us up, we keep it in.

MSG: I’m going to say straight out that I adore Bernie the stuffed beaver. What inspired that bit of flair for the title and what’s your favorite bit of insanity you’ve infused in the book so far? 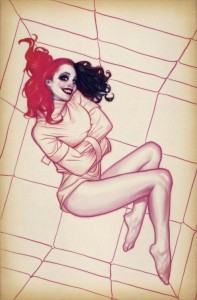 JP: Bernie the Beaver was Amanda’s idea all the way. She just put him in issue zero and ran with it. Only Harley hears Bernie and she even imagines other people hearing him and responding at times and Amanda’s purpose for it is twofold: one, to show that Harley is insane and is hearing voices and anthropomorphizes things around her to keep a bit of sanity. The second is so we can write 3000 beaver jokes. You should see the ones DC had to take out. Again, it’s why I say we are like two teenagers writing a comic. Our sense of humor has never made the leap into maturity.

JP: We have so much planned; it’s hard to begin. After this issue, we get to see how Harley deals with others problems a bit more, she becomes a sidekick to a retired spy, she has another adventure with Ivy and she has, built on her roof, something that everyone will be talking about for years.

Harley Quinn arrives monthly from DC Comics, but you can also catch Jimmy Palmiotti on books such as Batwing and All-Star Western from the publisher, and a brand new Kickstarter project called Denver that has two weeks to go! Be sure to check it out!