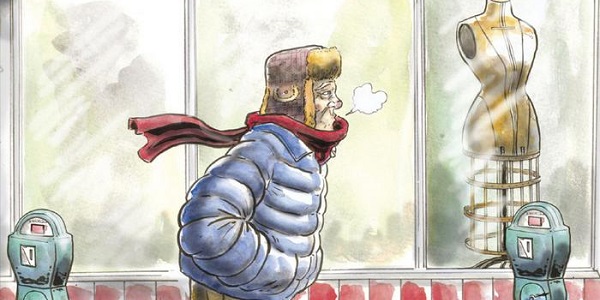 Digital readers, today is your lucky day. The first chapter of Joey Esposito & Sean Von Gorman’s Pawn Shop is available on comiXology, and it is a fantastic read. Esposito was kind enough to give us the dirt on Pawn Shop, where the series came from, what readers can expect from the first chapter, and much more!

Aaron Long: Let’s start at the beginning, how did Pawn Shop come to be? How did you and Sean Von Gorman start working together? 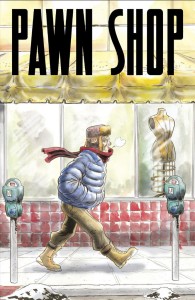 Joey Esposito: Pawn Shop started in 2011 because I used to drive past this one particular shop in LA on my way to work every day. The visual image of the shop itself — which we more or less copped for the fictional shop in our story — was just striking and so I would always notice it. I’m not sure how it developed after that, since ideas typically just percolate until they wind up on paper somehow, but that was definitely where it started. I really liked the idea of connecting disparate people in a major city through the items, the lives, that moved in and out of a pawn shop.

As for Sean, I found his work through social media when looking for a collaborator on a totally different project. When I started writing Pawn Shop, I remembered him and thought he’d be a great fit and I was right. His style and love of New York City really brought an authenticity to the book that probably wouldn’t be possible to capture with an artist that didn’t have the city in his blood. Sean’s also one of the most enthusiastic artists I’ve ever worked with, always brimming with ideas about the story or crazy marketing stunts we could pull. It was a rough road to completion, from both of our ends, but I think we’re both proud of the final product.

JE: The bird’s eye view is really about forgetting the bird’s eye view, in a way. The premise is that in a city of 8 million people, the lives of strangers aren’t as disconnected as they might seem. Our story follows four separate individuals that are connected in various ways, whether they know it or not. Each chapter follows a different character, so in some cases we see the same events from a different perspective, shedding new light on the different characters and their situations.

New York City is so at once unified but separate, so the high concept of the book is about exploring that notion and seeing how every life can affect another whether you’re aware of it or not. 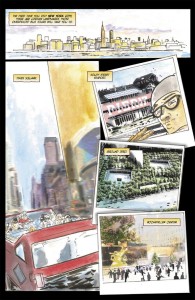 AL: The first chapter of the series focuses on Harold, a man who has lived in New York his entire life and has a different perspective on the city based on his life experiences. Can you discuss his tale, and your decision to kick the series off with the tale of Harold?

JE: Despite our age difference, Harold is the character in the book that I feel closest to and is kind of the key to the whole thing. His experiences and the way he shares them has a lot to do with how the book concludes, despite the final chapter being about a different character entirely. Harold is a widower and the loss of his wife is still fresh; he’s moved out of the city but finds himself going back there every day, unable to let it — and her — go. Loss is something we all relate to and deal with in different ways, whether it’s a significant other, a family member, a pet, whatever. In my experience that’s the hardest and most sympathetic part of life, so I thought it was important to start it out on that note to draw people into the story.

I also wanted to kick it off with him really because of how I wanted the structure of the story to work out. I liked the idea of beginning with a man coming to the end of his life and ending with another character that’s just starting to figure out hers, and having his experiences affect hers. So while Chapter 1 — and all chapters to follow — work on their own, hopefully it’s clear as you read how they all sort of play on one another.

AL: In the series you do a fantastic job of boiling a huge city like New York down to the random shared experiences of strangers, what is it about New York that you felt made it the perfect setting for Pawn Shop? 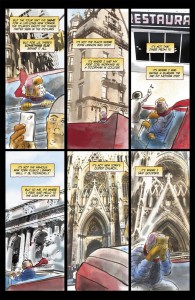 JE: Thanks for saying so. Like I mentioned earlier, New York is the only city that feels simultaneously disparate but inevitably connecting. I think we see that crisp and clear when some sort of tragedy happens and the city unites, but it’s there every single day, too. The personality of the city is so vibrant and I think Adam Knave’s very kind intro that he wrote for our book really sums it up nicely.

You can not see a friend for years, pass him on the street, and immediately pick up where you left off, because you’ve got that city in common. It’s a city that challenges you and so it shapes you, and that’s the kind of city these characters needed.

AL: Pawn Shop will be available in digital chapters on comiXology starting April 9. Can you discuss the release schedule, and other projects you have hitting stores and comiXology in the near future?

JE: Sure. So the history of the book is kind of a long one. We did a Kickstarter for the graphic novel in 2012, hit some snags in production, but finally wrapped it at the end of 2013 and went to press in early 2014. So the full trade paperback is available for purchase (http://joeyesposito.storenvy.com/products/5025955-pawn-shop-tpb-signed) but I wanted to try something different and experiment a little for our digital release.

The book is currently self-published by my label Soup Dad Comics and based on experiences with the book I co-write with Ben Bailey at Monkeybrain called Captain Ultimate (issue #5 out now!), digital readers prefer low price points and serialization. So I tried to make it a little event with a weekly release of the digital chapters, all priced at 99 cents, which John D. Roberts at Comixology was amazingly helpful with. I’m excited to see how the market responds, and at the very least, to have it available digitally.

As for other projects, nothing I want to talk about until it’s closer to go time, but Captain Ultimate is on sale now at Comixology, along with my other creator-owned crime series Footprints. You can also get my books at my online store. (http://joeyesposito.storenvy.com)

AL: Any final words or teasers for Comicosity’s readers regarding Pawn Shop?

JE: Just that the response to the book has been overwhelmingly positive and thanks so much to everyone that’s been checking it out. And thank you guys for your incredibly kind review. Word of mouth is the greatest press for a book like this, so if you dig it, please spread the word on social media and any place you can.

Oh, and Sean and I have been kicking around ideas for Volume 2… so there’s that.