The relaunch of Rob Liefeld’s Extreme Studios titles has been in full swing for a few months now, but ever since the announcement that these titles would be coming back there has been one on the minds of many fans: Youngblood. Probably the best known series of them all, Youngblood‘s return has been entrusted to a new voice in the comic industry, John McLaughlin, writer of the film Black Swan. John recently took time out of his schedule to talk shop about his history with Youngblood, blue freezer pops, and what readers can expect from the series under his stewardship. 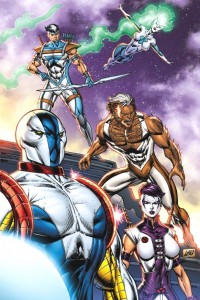 Aaron Long: Can you discuss how you became involved with Youngblood?

John McLaughlin: My pal Scott Lobdell was supposed to do it, and then he couldn’t at the last minute, so he asked me. I don’t know why the powers that be allowed this! If they only ran a proper background check on me, they might have known in advance that I am completely unqualified.

Incidentally, I’ve learned from various announcements concerning Scott’s other jobs that he is a polarizing figure in the world of comics. Fans either hate him, or they really, really hate him. It’s an argument that may never be settled.

AL: Were you a regular reader of the series during its original run?

JM: I never read comics growing up. I didn’t have money and I don’t like to touch paper. A friend of my mother’s said she’d bring over some comics that her son was done with. I thought Superman….Spiderman… It was three giant boxes: and they were all “Archie.” Thousands of issues of “Archie.” Let me tell you, when you open box after box of old comics and they’re ALL “Archie,” you have suffered a trauma from which it is difficult to ever recover.

The same kid’s mother, on another occasion, brought over a good two hundred pounds of freezer pops. The only flavor missing—the only flavor her son would eat—was blue. And as we all know, blue freezer pops are the best!

But, to answer the actual question–No, I never read Youngblood, but I boned up and read all the old issues before I started so I wouldn’t make a fool of myself, and it was awesome. 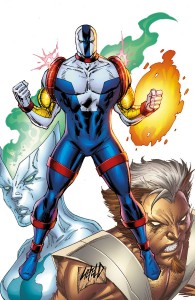 AL: The series will be continuing the original numbering. Will the story be set in the previous continuity as well? Or is this, for lack of a better term, a Youngblood reboot?

JM: It’s more of a reboot really. I tried to retain the history of Youngblood without alienating potential new fans who never read the old stuff. But it’s not an origins story—Youngblood, in this series, has existed for a while and they’ve had lives while the series wasn’t being published.

AL: Youngblood is probably the most famous of the Extreme titles being relaunched. Can you discuss what readers can expect from the first arc and your take on the team members?

JM: I like the idea of people doing amazing things while coming under constant public scrutiny. I love the characters and didn’t want to do anything drastic. I don’t know what to say about the story arcs so I’ll just keep my mouth shut!

AL: While you have written many hits for the big screen and the world of TV, Youngblood will be your first title in the world of comics. What has it been like working with an industry vet like Rob Liefeld?

JM: I am truly honored to be associated with a talent like Rob—he’s been a fantastic and patient guide, and a great inspiration! I feel like this is his child and he’s let me take him to the playground—I just don’t want to bring his kid home with a black eye and a fat lip because I let him get hit in the face by a tire swing!

It is a very different discipline from screenwriting, and I know how smart and savvy the readers are, so I hope they’ll be forgiving!

AL: Any final words for Comicosity’s readers regarding Youngblood?

JM: I think what everyone should do is buy a thousand issues of Youngblood and stack them in boxes and give them to a comic deprived child. Maybe buy ONE Archie and put that on top, so when you watch the kid open the box, you can see his expression kind of twist in despair, before he digs down and finds the cool stuff!