Up later this Spring, we’re seeing a brand new super-hero universe arrive to the comics stands. No, not from Marvel. Not from DC. Move over Image Comics. Fantagraphics is rolling out All Time Comics, a brand new super-hero line envisioned by Josh Bayer, with contributions from a slew of classic and indie comic book creators. Bayer sat down with Comicosity to share how the line is developing and what fans can expect from its first four titles.

Matt Santori: Congratulations on the new line of books coming from Fantagraphics in March, and thanks for taking time out to chat, Josh.

Maybe we can start by getting a sense of this universe you’re building. It feels like equal parts comic book nostalgia and modern satire, perhaps even with a bit of politics thrown in. What is the sensibility you’re trying to capture with All Time Comics?

That’s what hallucinogenic drugs do, and that’s also what a good comic does. How many times have you started reading a comic and said, “Who, what is this fucking thing I’m looking at?” And then, suddenly, you’re locked into the story and you don’t know how it happened that you’re genuinely sucked into this world, and end up reading something that stays with you. 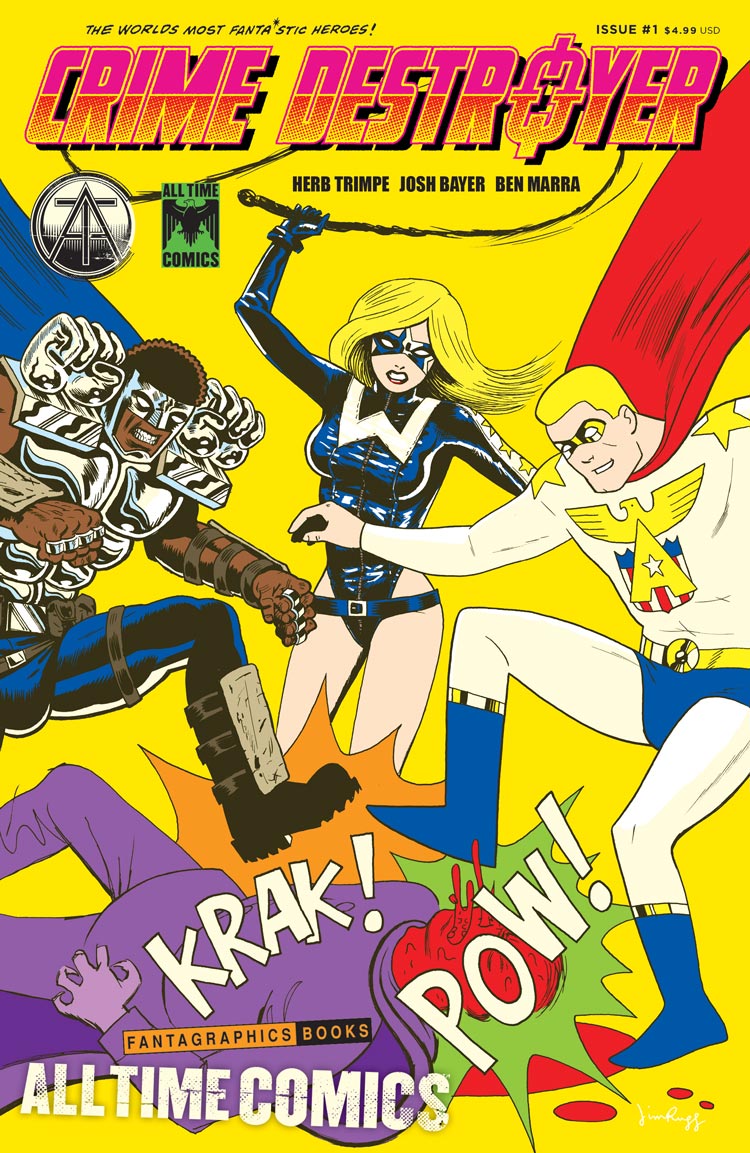 MS: You’ve co-created this line with your brother, director Sam Bayer. How did that process work out and what are each of you bringing to the table?

JB: Sam visited me in New York two or three years ago, and that’s when he first hit me up to do this project that he’d been nursing on the side. He’s had a few different projects over the years that he’d always wanted to do as films, and he wanted me to do the back story, which could take place at some vague point in the past.

He laid out the characters’ names, their powers, and what kind of car Crime Destroyer has. He was like, “Can you do some stories and get this going? Just, you know do your thing. Who do you know?” I immediately thought of Ben Marra, “and yo, how hard would it be to get …” and Sam started listing different creators. Steranko? Neal Adams? Steve Ditko? I immediately thought of reasons those three choices might be tough, but I thought of Herb Trimpe, then deeper cuts like Ron Wilson, Rich Buckler, Tom Morgan, Rick Veitch, Bill Wray… What would THAT be like?

And we ended up with Al Milgrom, Herb Trimpe, and Rick Buckler. And so the rest is history, a history that’s still unfolding. Stay tuned. 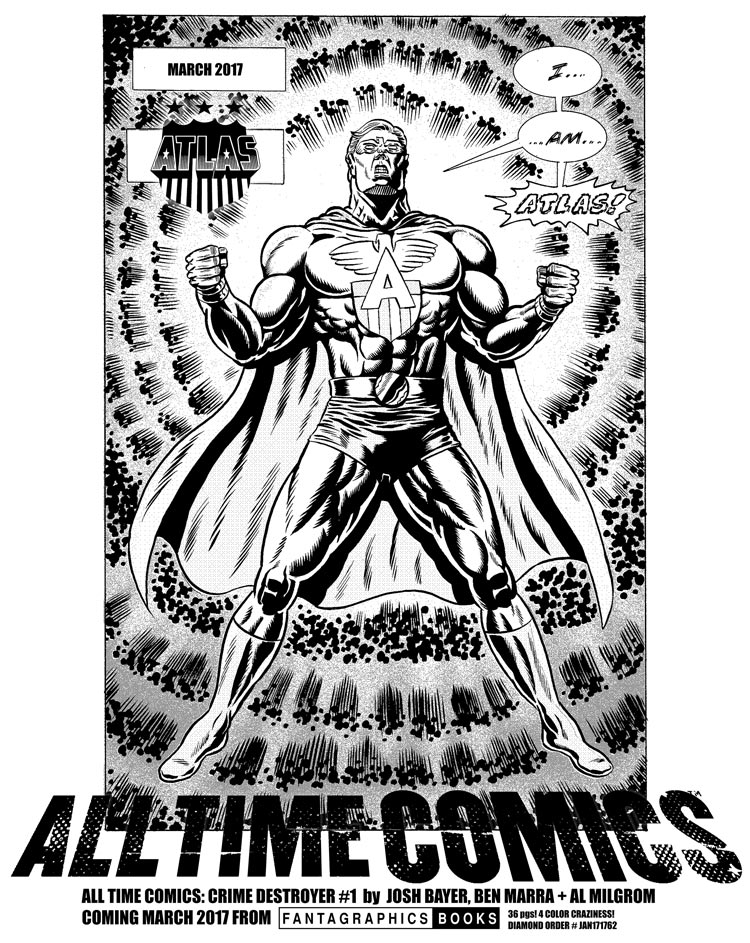 MS: Let’s talk characters. First up is Atlas. Who’s working on the character and what’s the overall take?

JB: Atlas is the most super-powered of the heroes, the one with the most magical or fantastic abilities. He can fly, he’s strong, and like so many of the golden-aged heroes, he has a fatal weakness that can wreck him at anytime. Sam wanted him to be basically allergic to fear. If he becomes afraid, he loses all his power. It’s a simple idea and potentially really potent.

When I was a kid, I always liked stories where heroes find ancient legendary weapons that empower them, hidden right under our feet. So I actually can up with an origin story for his abilities that has a cosmic scope, which we will hopefully reveal in future issues. 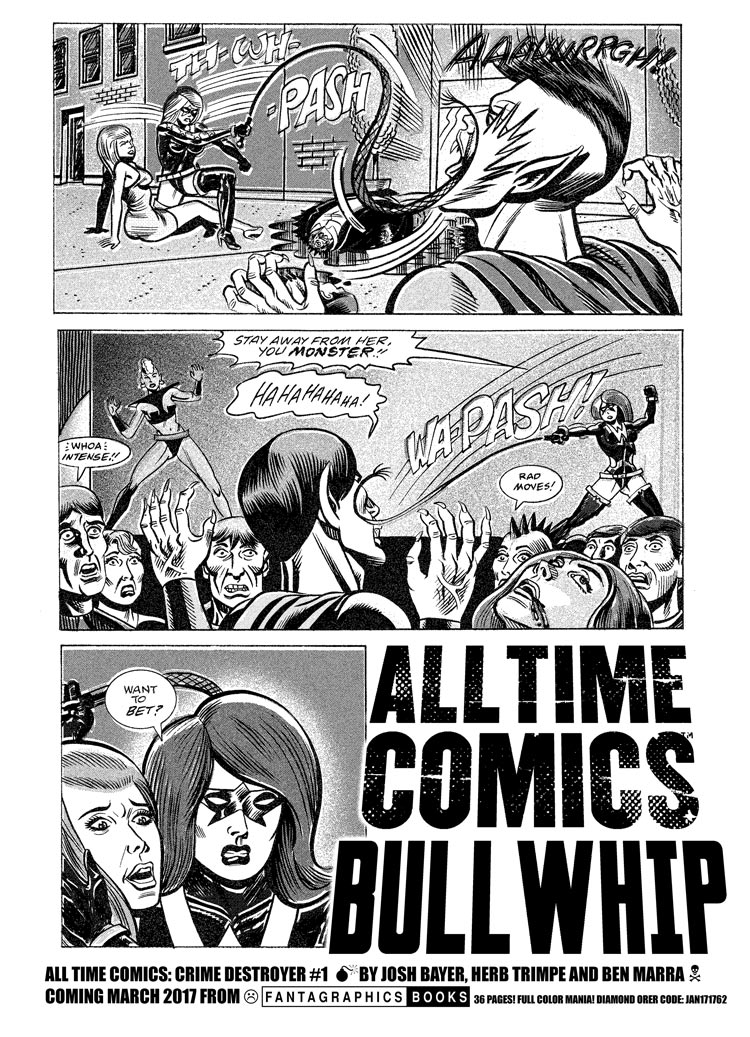 MS: You’ve commented that Bullwhip started out as an ode to the Silver Age of comics, but ended up as something else entirely. What exactly would that be?

JB: Bullwhip ended up being just so fun to write because, in my mind, this is just who she is. Usually, when you read a comic that has someone in a mask, they are always keeping a stiff upper lip. If someone in a mask gets surprised and comes back without a sort of measured calculated response, then oh no!, their spontaneity will show who they really are.

But with Bullwhip, the idea is that she just is this person all the time. There’s no difference between the fantasy and the actual person, like a rock star eventually become their stage persona all the time. So with Bullwhip, there’s one part where she gets pissed off and says, “You cops are a bunch of dicks.” She’s not political, she just doesn’t filter what she does through a sense of what people will think is right, and what’s good for her reputation as a superhero.

Frankly, writing driven by a need to hide their real identity is interesting, but so weird. I tend to be kind of divided and schizoid anyways, so writing someone who has more of a singularity about her feels much more right to me.. As you can tell, she’s grown into one of the two characters that I think feels the most organic and real to me. 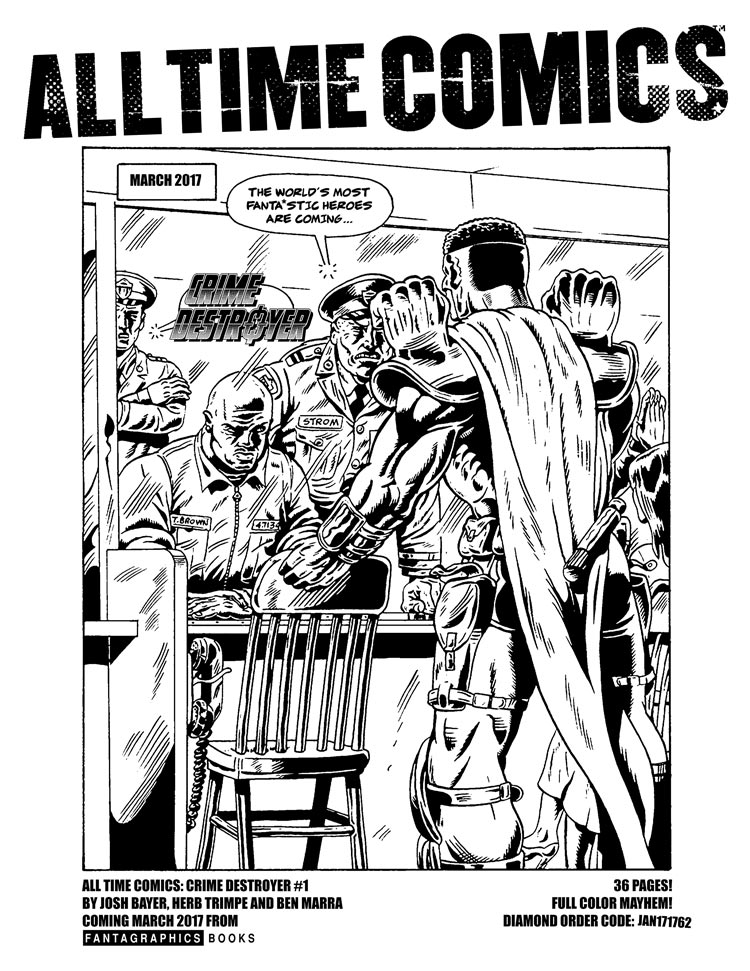 MS: The Crime Destroyer feels a bit like a social throwback, but so much of the late 60s and 70s sensibilities seems to be pertinent all over again in 2017. What’s he all about and is that modern replay of social issues playing out in the title?

JB: Definitely the tensions and conflicts of the past are very much in our face right now. Given a chance to write up a story where we get to have Crime Destroyer kill Nazis and Klansmen comes second nature in 2017. Crime Destroyer is from the tradition of embittered Veteran narratives of the 1970s, and in the tradition of characters who are driven to pursue Justice because of a tragedy.

When I was kid, I had Dick Tracy’s Greatest Cases, and when I read Dick Tracy’s origin, he was just some faceless everyman until a crime boss wiped out his fiance’s family and that experience put the gun in his hand. The tradition of becoming a crime fighter to avenge tragedies runs deep in comics. 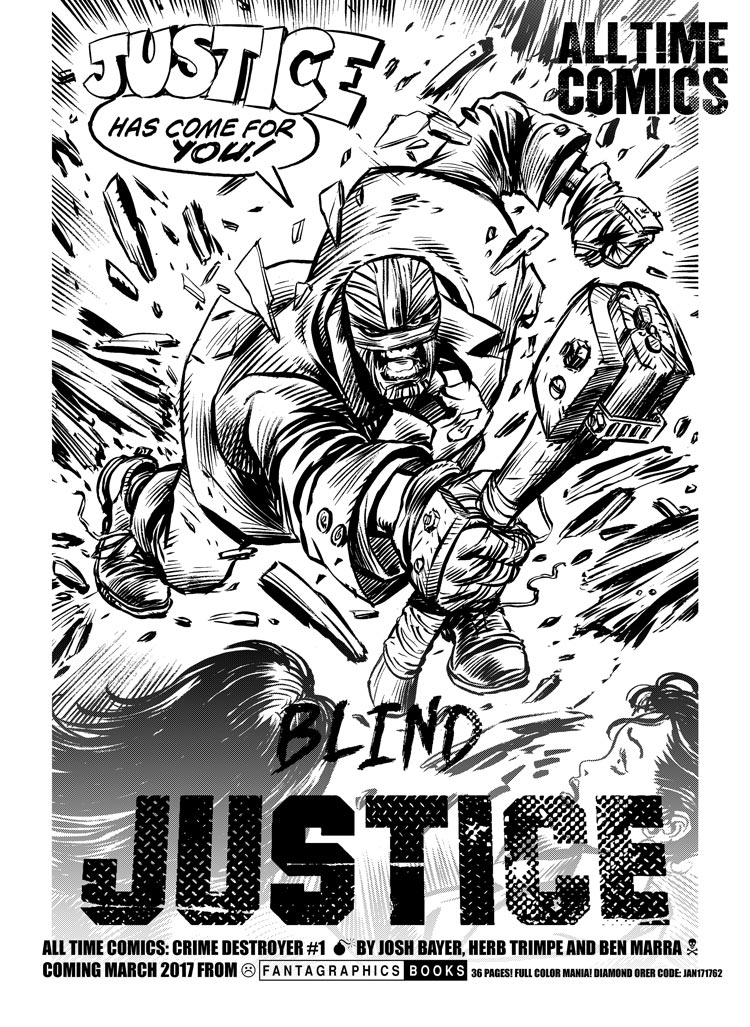 MS: Last up is Blind Justice — the Man Who Walks Through Bullets. Tell me a bit about the sensibility here for your line’s anti-hero.

Blind Justice, or Justice starring in Blind Justice comics, is the persona non grata of a capitalist culture. He’s at the bottom of society’s barrel, he can’t work, he’s just a drain on federal resources. He’s a resident of a brain trauma center, and he sits in the day room like he’s catatonic, but he’s not catatonic. It’s the perfect cover. You could put his dick into boiling water and he’d just sit there staring, that’s how committed he is is to playing the part.

But when there’s a need for him, he gathers himself and sneaks off to a vacant room, and then he wraps himself up in homemade armor, really ramshackle, like duct tape, cardboard, phone books, and bandages. He’s convinced that he’s bulletproof. No matter how many times he’s shot, he is unwaveringly committed to this idea. If he’s shot in the arm, he’s like, “See? I should have been shot in the heart, I can’t die.”

When criminals see him, he’s this huge hulking figure, and underneath it, he’s this little person, a little sort of shlub with this consuming fanatical belief in what he does. I relate to him a lot, haha.

MS: The range of creators here is astonishing for a new line. What kind of aesthetic mix do you feel the group is bringing that differentiates you from just another super-hero universe?

JB: Yeah, we’re not that different in many ways, and I’m cool with that. I’m not so arrogant as to say we are doing something totally unique. Just a little unique. I’m just carving out a small piece of territory over here with the people I want to work with, and who I want to see make cool stuff. 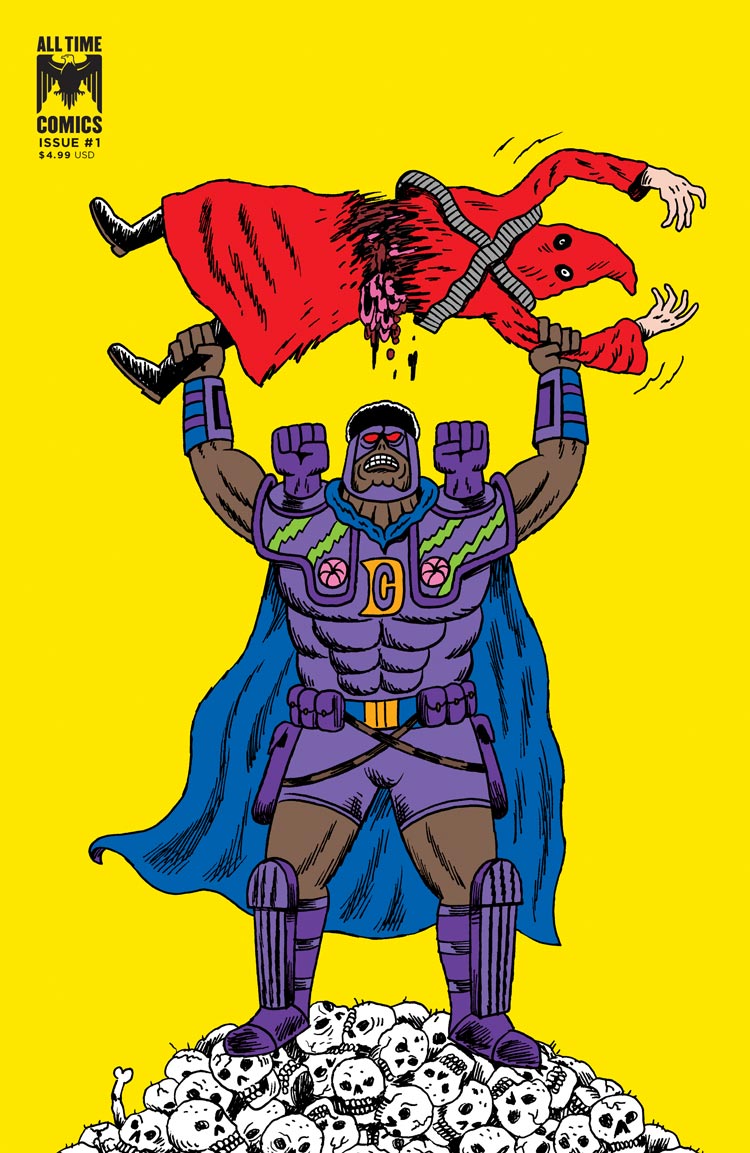 Sure, there’s something weird in the comics, like there’s hopefully an eerie creepy vibe to them. In the past, independent creators or underground cartoonists felt it was important to rebel from mainstream comics and stake out their own piece of the comics map. But all the creators I know respect the traditions of mainstream stories.

For me, there’s something special about some of the comics from the 60s, 70s, and 80s that felt more organic at times, weirder. To add the talents of masters like Trimpe, Parker, and Milgrom to the work of younger artists is great, but when you look at older comics, this has always been done. I found a Marvel comic last year that had Mark Gruenwald writing and art by Lee Weeks and Stan Drake, who was a newspaper cartoonist of twenty years earlier.

When you get older and you look back, you realize that the editions from the 80s were full of mistakes at times, and that’s more interesting than the super perfect sterility that comics entertainment may evolve into as they get more oriented around film.

Indie creators of today that I’ll talk to all still relate to the superhero and genre comics they grew up on, though sometimes indie creators turn their back on that stuff to make personal work. Many of us want to celebrate those comics from people whose careers went back thirty five years, as well as our personal work.

We are definitely on the same team in so many ways that matter with ALL TIME COMICS. It’s not that we are doing something that’s never been done, more like it’s never been done with this group. For me, the perfect description of ALL TIME COMICS is The Best Comics from 1979 that you could hope to read that somehow escaped a public viewing until now.