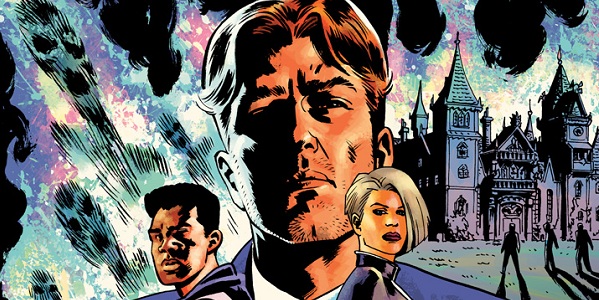 Comic fans, it is time to step into Joshua Williamson’s haunted house…This July, Williamson’s Ghosted will be published by Image Comics to take readers into the world of the supernatural. The writer was kind enough to take time to discuss his new series with us, and what readers can expect from Ghosted.

Aaron Long: Alright, let’s start at the beginning: how did Ghosted come to be? How did the book end up at Image? 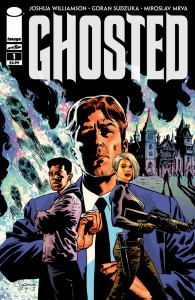 Joshua Williamson: For a bit I felt I wasn’t writing the kind of comics I wanted to. Which is a horrible feeling for a writer. I love super heroes, but I knew that I wanted to do a darker, more grounded story that still had snippets of the fantastic. My heart and head were looking at doing a crime or horror book, and I started thinking: Why not do both?

Ghosted was an idea that was floating around in my head. It was one of those books that I had a strong feeling about and talked to my managers about shopping it around to publishers. They immediately suggested Skybound and Skybound in turn immediately were interested so we went from there. It went super fast… which was unusual for the comic industry but was a testament to everyone’s passion for the book.

AL: Ghosted has been described as equal parts “Ocean’s 11 and The Shining” – can you expand on that a bit? What drew you to the haunted house setting?

JW: The one liner is super simple. “It’s Ocean’s 11 inside a haunted house instead of a casino.” Our main character, Jackson T. Winters is broken out of jail and assigned with a task of putting together a team of paranormal experts to steal a ghost from a famous haunted house. And as they get deeper into the house they learn and see more and more of its secrets.

I’ve always been a bit obsessed with haunted houses. The visuals of them. The spookiness and the stories they all have. Maybe I just like scaring myself, not sure, but I knew for a long time I wanted to do a comic that took place in one.

AL: Can you discuss the main character, Jackson T. Winters, a little more? A mastermind always has an angle, what is he hoping to get from the situation in Ghosted? 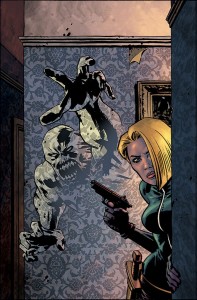 JW: This is Winters’ last chance at life. He’s looking at it as a chance to redeem himself after his last gig was a colossal failure that cost the lives of his last team and landed him in prison. And of course he wants money.

Winters has a chip on his shoulder and has a lot to prove. He’s still the best at what he does. An expert on the weird dark side of where crime and the supernatural meet. But he wants to be free. Winters is a guy who just really wants to be free, but that life keeps pulling him back in. It’s left him scarred and haunted. A bit of a dark soul at time, but still a man of honor.

AL: How has your creative process been with Goran Sudzuka? What has it been like watching the world of Ghosted come to life?

JW: Goran has been amazing. So great. It’s insane how much we were on the same page from the moment we met. The last few years I’ve been lucky to meet artists who I just clicked with and that started with Goran.
Goran really nailed the look and feel of Ghosted, and I couldn’t be happier.

Seeing the characters, the scenes, and the pacing, the tone all fall into place the way it did was breathtaking. With each page that was turned in, I saw exactly what I was thinking when I wrote it. It’s hard to express the feeling of seeing new pages turned in, yknow? And with Ghosted it just made me want to work harder and be better. Goran brought his A-game to the table and I looked at that as a challenge to give him even more cool shit to draw.

AL: Do you have any final teases or comments regarding Ghosted or any other upcoming work?

JW: Ghosted has been one of the most rewarding comics I’ve ever worked on and I hope people take the time to check it out and enjoy the hard work we put into it.

Ghosted #1 is in stores July 10th and I can’t wait to share it with people.

And a few rad projects that it’s way too early to talk about. Going to be an exciting few years.