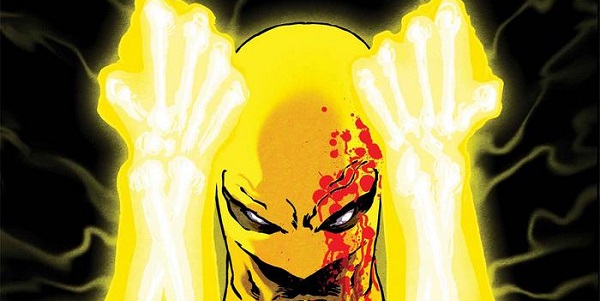 This April, Marvel Comics and Kaare Andrews are primed to unleash the Iron Fist back into the Marvel Universe. That’s right, Danny Rand is back in a new ongoing series Iron Fist: The Living Weapon. Andrews will be writing and penciling the book featuring the former Hero for Hire and martial arts expert, taking readers to places we haven’t seen in Iron Fist titles of the past. Andrews was kind enough to take time from his schedule to discuss the new book, his take on Danny Rand, and the unique situation of having a series by a writer/artist in the Big Two.

Aaron Long: Thank you for your time! So, how did you get involved with Iron Fist: The Living Weapon? What drew you to the character?

Kaare Andrews: No problem. Well, I had just taken a year off comics to direct another feature film. And I had a conversation with Axel about what I might do upon my return. We talked about a couple of different situations, drawing some event books, or what have you… but I was really interested in writing something again. I had written a couple of A+X and A vs X stories recently but besides screenplays, hadn’t written anything of great length since Spider-Man: REIGN. And I just had a real urge to do something “all in.” Axel had a couple ideas and one of the characters he asked me to take a look at, was Iron Fist. I had always known about the character, and had even painted some covers during the Brubaker/Fraction/Aja run but I didn’t KNOW the character. I didn’t have a grasp of his “core.” But I was really curious. So I started where I always start when researching something, the beginning. As soon as I read Marvel Premiere #15, everything clicked. And as I read those early issues, I finally understood who this character was, and I had a way in to a story. I pitched Axel in a paragraph and he seemed as excited as I was. And we were off.

AL: Danny Rand has been a Defender, Avenger, Immortal Weapon and more in the fairly recent past. Can you discuss who he will be in your series?

KA: Danny Rand was taken in as a boy to a sort of magical Shangrilah where he spent ten years training to return home and kill the man that murdered his parents. In the final moment, the monks offered him a chance to abandon his quest for vengeance and stay amongst them as an immortal– And Danny refused it.

That’s the core of this character.

That’s what’s interesting to me. Danny never actually became an Immortal Weapon. He chose to remain mortal. A Living Weapon. When offered immortality, he chose death. It was the wrong choice and he’s never truly been punished for it. Instead, he’s kind of forgotten all of that. He’s been living as a billionaire playboy in his little penthouse and doing charity work and teaching street kids kung-fu. But as the son of two counsellors, I know that if you don’t deal with your past– it will find a way to deal with you. And it’s coming for him like a freight train. Because revenge is a weapon that cuts both ways– those it is used upon and those that use it.

AL: The teaser images for the series have focused on Danny Rand being a living weapon. Can you discuss what he will be up against in the first arc of the series? Will Iron Fist be a weapon of K’un-Lun or on a mission of his own?

KA: I can’t discuss it. Sorry. That’s the whole story. But soon enough you will find out what it means for the unresolved past of one man to drag him back to hell.

AL: Where Iron Fist goes, characters like Luke Cage, Misty Knight and Colleen Wing are typically not far behind. In this series will Iron Fist have his well known supporting cast, or will he being going solo?

KA: I’ve always believed that the archetypal martial arts story is one man on a journey. One man against all odds. One man who must die and be reborn. We’ve all seen the story of Danny and his crazy friends joining together to fight some unstoppable force. This is NOT that story. Fundamentally, I don’t believe kung-fu is a team sport. I am soley interested in Danny. This one character. This one story. There will be no one to help him when he falls. Not this time. He’s going to have to face the wrath of two worlds on his own.

AL: You are writing and penciling this series. Having spent the last few years in the film world, do you feel that experience has changed your storytelling with respect to comics?

KA: Yes. Definitely. But I can’t really or haven’t really tried to understand how. I’ve always loved comics and will never leave them. To do a book of this size really feels like coming home. I love it. And the great thing about a book like this is I can own all of my mistakes. In film, you are just saddled with so much baggage. Every day you are compromising, negotiating, leading, fixing other peoples mistakes, or living with them. I think Fincher said it best, that Directing is like being the quarterback of a football team. When you lose you get too much blame and when you win you get too much credit. Don’t get me wrong, I enjoy directing as much as I enjoy comics, but it is so refreshing to know that it’s all on your shoulders. You don’t have to wear anyone else’s mistakes and you don’t have anyone else to throw under the bus. And it is so exciting to be in this position again.

And really, doing a book this way is the best way to do this specific story. A martial artist surrounds himself with knowledge, training partners, coaching and all that– but at the end of the day it all rests on his shoulders. I feel very attune to that state of being.

AL: Can you discuss the look and feel of the series? Are there any specific influences for your designs in Iron Fist: The Living Weapon?

KA: Much like Matthew McConaughey, my hero is also Matthew McConaughey in ten years time. Sorry, I couldn’t resist. No, my influences in this book are all the great writer-artists that came before me. Jim Steranko, Frank Miller, Todd McFarlane, John Byrne, Will Eisner, and anyone that has taken control of the machine itself. It used to be more common but the writer-artist has sort of vanished, lately. I’m here to tell you there is a different way of telling a story. That when the writer is the artist, the methodology is different. And therefor the results are different. Is it any better or worse when one guy takes control? I couldn’t tell you. But I can tell you there is great joy in creating the work. And I only hope it translates across the page from my lonely studio into the hands of you, the reader.

AL: Any final words or teasers for Comicosity’s readers regarding Iron Fist: The Living Weapon?