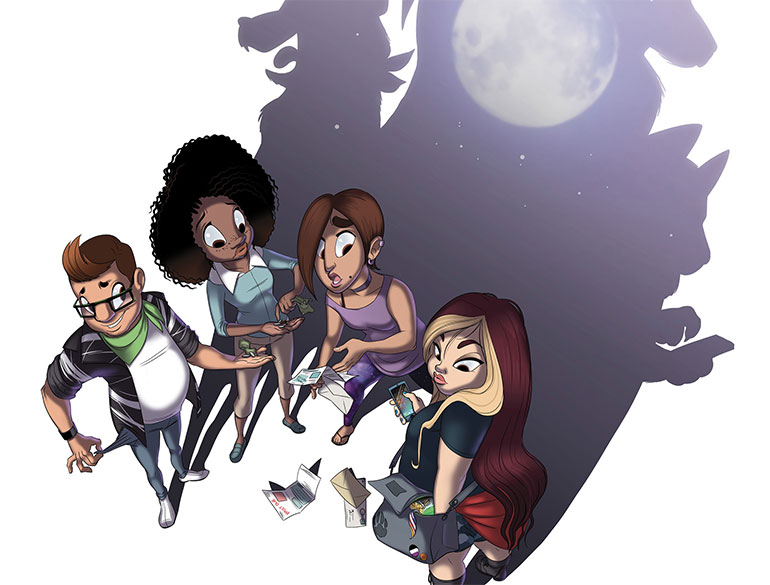 Looking for a little magic in your comic pile this week? Space Goat Productions has a number of new series on their way, aimed directly at all-ages audiences, with Moonlighters #1 hitting Comixology today. Rolling out a group of queer and queer-friendly characters in werewolves’ clothing (!), writer Katie Schenkel chatted with Comicosity about how the series came to light, what went into the character development, and what kind of audience the book is looking to capture.

AL: Congrats, Katie, on the new series with Space Goat! How did you and artist Cal Moray connect and develop the initial concept for Moonlighters?

KS: Thanks! I’m super excited it’s finally out in the world.

So, I was originally contacted by Space Goat because they had a general idea for a series about college student werewolves doing odd jobs. My now-editor JD Boucher knew me from my critical work at BookRiot and Comics Alliance and the company was specifically looking for pitches from creators who were passionate about marginalized representation in comics. I immediately became connected with the ideas they had already come up with. 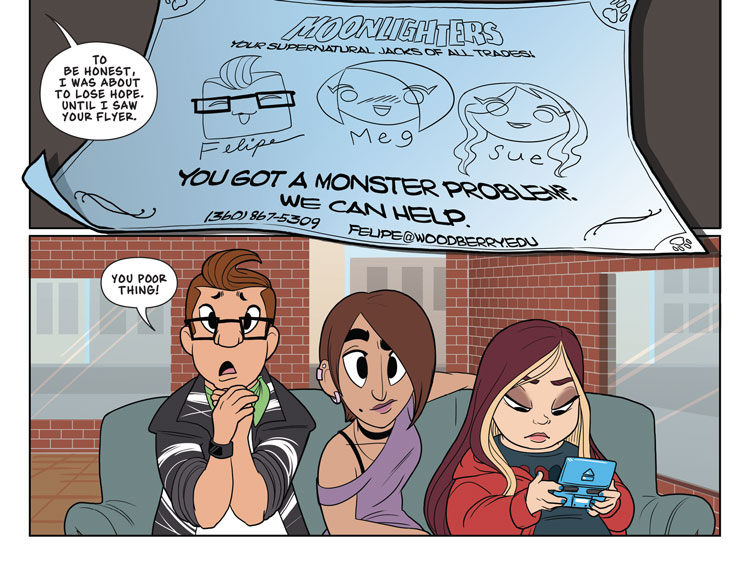 From there, I pretty quickly built up the storyline and developed the characters. The very last moment of the last issue was the first thing I wrote down, actually, and it came together from there. I sort of fell in love with the idea for this book in the process, and let me tell you how happy I am that Space Goat thought I made a good fit for it.

Cal was already being brought into the project around the time I signed on and we only met once we started discussing issue one. That being said, I am completely thrilled with Space Goat’s choice. Cal has brought so many great ideas to the character designs, and their upcoming page layouts bring the story to a whole other level. I am consistently amazed at how they’ve taken my script and laid out the scenes 10 times better than they were in my head.

AL: The tone of the first issue is fairly lighthearted and funny, but there is still the sinister mystery surrounding Renee. How do you see the tone of the book as a whole?

KS: The majority of the book is meant to be funny. After all, we have these monsters taking on the most random odd jobs with a supernatural twist, so humor was always going to be part of the story. But what the larger mystery with Renee lets me do is explore some real drama in between these funny set-ups.

For instance, the second issue is going to explore more of what makes Renee’s experience as a werewolf different from the rest of the Moonlighters, and the moment she realizes it … well, let’s just say Cal’s art knocks it out of the park in that scene. 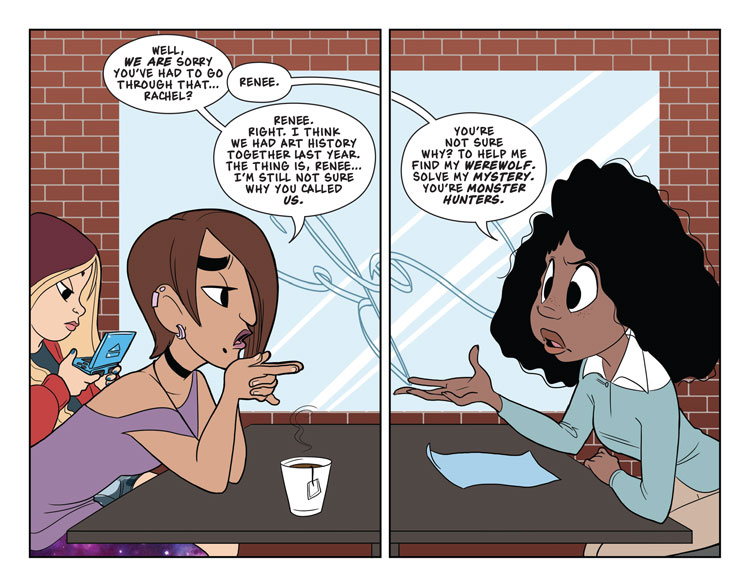 AL: The cast introduced in the first chapter are all werewolves, of course, but they’re quite ethnically and physically diverse. How did you and Cal work out the human character design and what was your thought process?

KS: Space Goat was very clear from the beginning of the pitching process that they wanted Moonlighters to feature people of color, and I made a point of not having any of the leads be white. I know a problem with the urban fantasy genre is how often characters of color are either nowhere to be found or they’re very minor side characters at best, or they’re used when the writer needs a character to suffer or die.

Frankly, that sucks, and I went into the book hoping to do something different. In Moonlighters, I wanted to write werewolves who weren’t white and who got to be the heroes of their own stories.

I had already planned out the characters’ ethnicities within the pitch — Meg is Indian, Renee is black, Felipe is Guamanian, and Sue is Mexican — but for the body diversity, I was really open to Cal experimenting and coming up with what they felt was a good look for each of the characters. My only request was that there was body diversity across the board, which Cal absolutely delivered on. 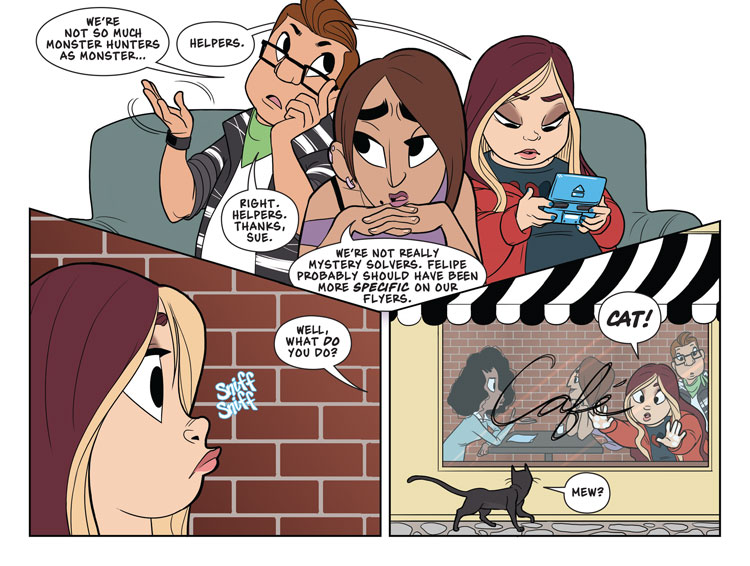 One of my favorite things about the range of sizes in our main characters is Meg’s design — I’m around the same size as she’s supposed to be and it’s nice to see a pear-shaped character with a little weight in her arms.

So much of mainstream comics have ignored female characters that look like Meg (and who look like Sue, for that matter) and I’m proud to create a comic where they not only exist in the world but are the main focus of our story. Sophie Campbell’s art (especially on the Jem redesigns) has a big inspiration for me in terms of what comics can and should be going forward. If Cal and I can add to that with Moonlighters, I’ll be very happy.

AL: Your early description of the series describes the main cast as “cute, queer werewolves being friends.” How much does each character’s queerness factor into the story overall and why was that an important element to weave in for you?

KS: Along with the ethnic diversity of the cast, Space Goat was very upfront that they wanted the Moonlighters to feature LGBTQA characters. For me, queer kids finding each other is a thing that happens in the real world pretty naturally but we don’t get to see in comics nearly enough, so having my four leads be LGBTQA was very intentional.

Each of their orientations will be touched on down the line, whether openly talking about it or shown through growing romantic affection — crushes and romantic tension are coming in Moonlighters and it will be very cute. Thanks to the digital-first format and how much world building we’re setting up right away, it will take a couple issues to really get into those aspects of the characters, but it is coming. 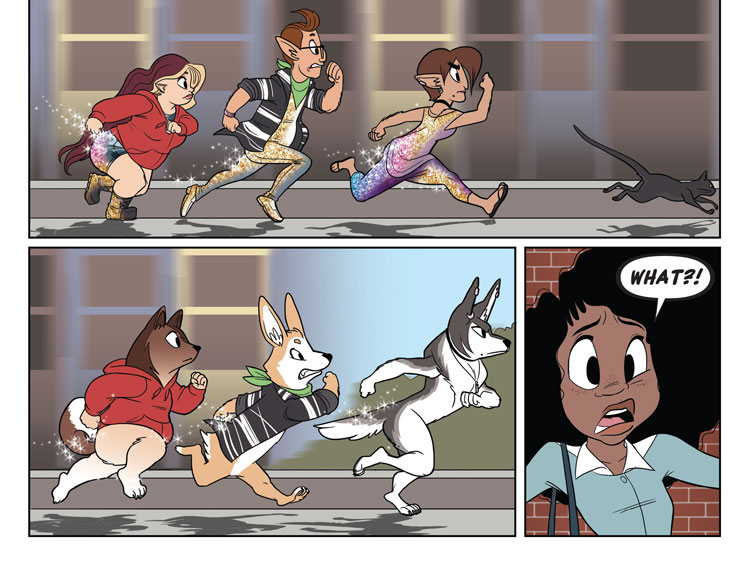 In some ways the characters’ queerness isn’t part of the main plot, but Moonlighters’ world building did hinge on acceptance and normalization of queer people within the monster community. I don’t want to downplay comics where the queer character’s sexual orientation is part of the main conflict of the story – that kind of representation is important and those stories need to keep getting made. But I think it’s equally important to write stories where queer characters are out and largely accepted and just allowed to be.

AL: Magic is central to the story overall, with witches and werewolves and mediums aplenty. These kids aren’t your usual werewolves though… how did that evolve?

KS: A lot of traditional werewolf lore has the idea that being a werewolf is by default a curse. Being bitten means a cycle of suffer and there’s no relief for the person affected. For a book about queer college students of color aimed at an all-ages audience, I really didn’t want my werewolf story to be about them suffering with no hope. My aim instead was to create a world where the average young werewolf lives a pretty comfortable life as a lycanthrope. So I changed up the werewolf rules, because I could.

I’m pretty sure the last few months of protesters fighting to keep adequate health care in the real world was a big influence on this part of the world building because later issues discuss the monster community’s thriving health care system designed to keep werewolves safe and safer to others. While there are sometimes complications (and Renee faces some of those), there was something great about choosing to write a fantasy world where young people could get their health care needs met. 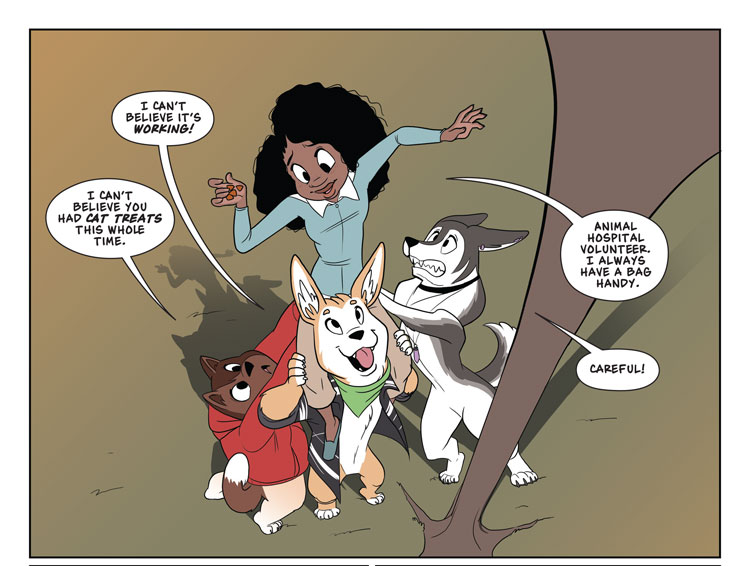 AL: While Moonlighters is digital-first, your eventual print versions will be in a backpack format is designed specifically for kids to carry. Have there been any challenges with the physical size of the book or with the digital first nature for you as a writer?

KS: The formatting of the book is slightly different than a regular comic, which from a writing standpoint means I have to keep an eye on the number of panels per page. There’s also just less pages than for a standard comic issue, so from a plotting point of view I need to be very efficient on the project.

But it will all be worth it in the end, because the backpack format is a great idea! The end goal is to make a comic book kids can easily take to school and back without worrying about it getting folded or crumpled. Basically, making it as easy as possible for little kids to get into reading comics.

AL: How has it been keeping the all-ages audience in mind? What kind of reader are you looking to reach?

KS: Is it cheating to say I want all the readers? Ha ha.

But to be honest, I’m hoping Moonlighters finds a readership across a lot of age groups. Between Lumberjanes and Gotham Academy and The Unbeatable Squirrel Girl, there’s a growing segment of comics that are written for kids but appeal to a much larger audience. I’m in my 30s and I definitely wrote the kind of book I would want to read.

But when push comes to shove, I’m hoping to reach younger readers who want a fun, sometimes spooky, but definitely funny comic and who might need to know stories can be told about people like themselves.