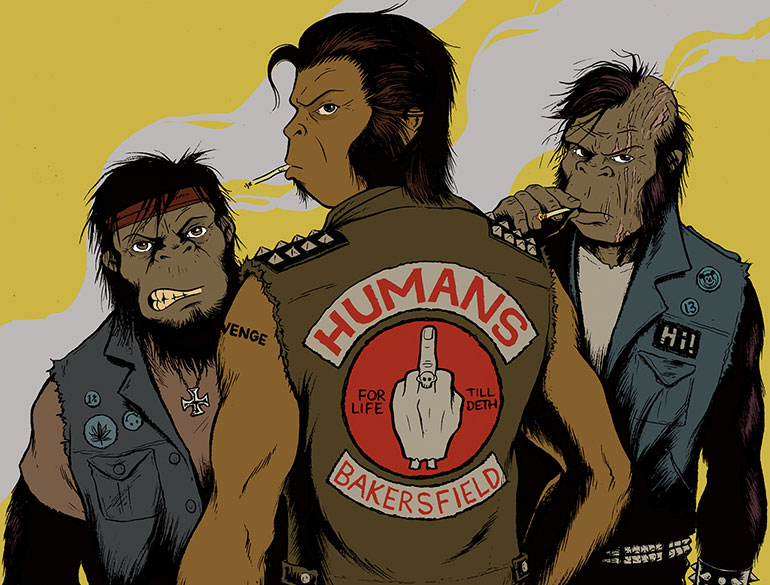 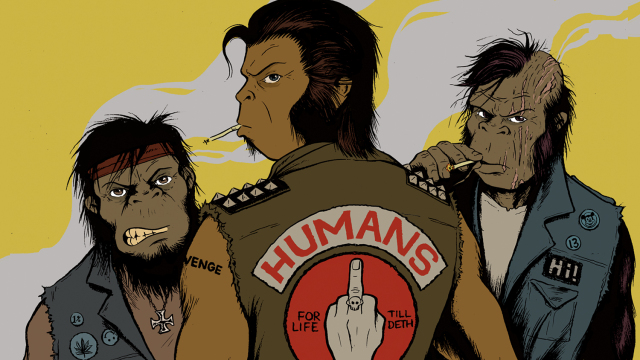 This week The Humans #1 hits stores and I couldn’t be more excited! This new Image Comics ongoing title follows ape biker gang the Humans as they go around protecting their turf and causing all kinds of trouble. In cased you missed it from the November 2014 solicitations:

Apart, they are nothing…deemed by society as outcasts, misfits, losers, no good punks! But together, they are THE HUMANS! THE HUMANS is a high-octane, no-holds-barred, ape-biker-gang chopper ride into ’70s exploitation genre bliss. Follow Bobby, Johnny, and all The HUMANS as they fight and fly down the road to oblivion on a ride filled with chains, sex, leather, denim, hair, blood, bananas, and chrome.

Having read self-published prologue issue #0, I have high expectations that this will be the most bad-ass book on the stands this month, and maybe even the most bad-ass book of the year. The guys who make it, Keenan Marshall Keller and Tom Neely, are also total bad-asses who took the time to talk with us at Comicosity and give some insight into the creation of the book. They talk bikes, apes, and clue us into the comic’s own soundtrack (how cool is that?). Check it out:

Sam Marx: What were some of your main inspirations in making The Humans an ape biker gang? Do you ride? 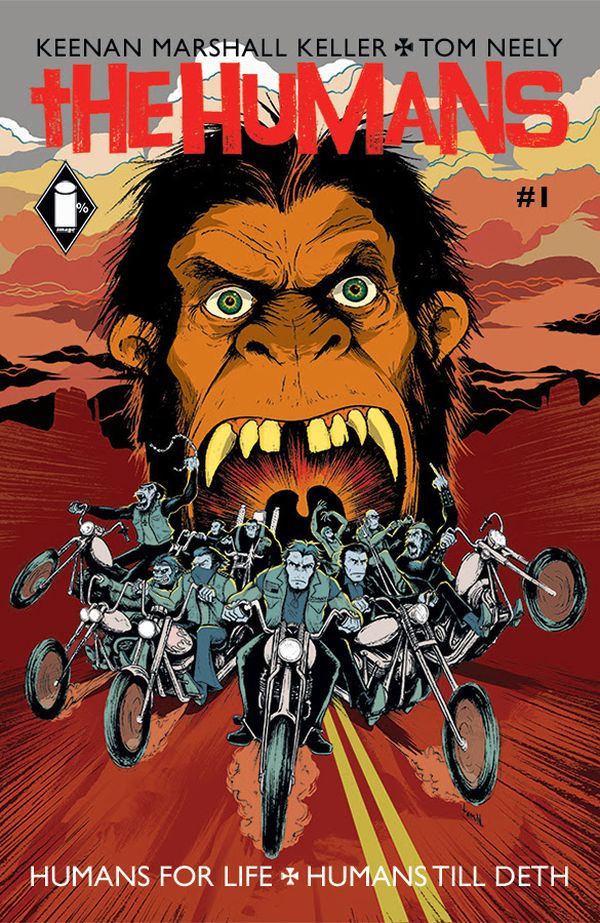 Keenan Marshall Keller: I personally do not ride, nor do I know anything about bikes… but I’ve always found them to be cool and beautiful objects. That, and I just love me some biker flicks and exploitation/genre in all forms. It wasn’t like I was trying to do an ape project and settled on them being bikers… The Humans were bikers from the start. It’s my love affair with the fringe, with outlaws and no-good-doer’s and made me focus on biker culture.

Tom Neely: I grew up riding dirtbikes on the farm when I was a kid, but I didn’t get my first real motorcycle until last year and have started riding regularly. Currently I have a ’79 KZ1000, but I hope to save up for a Harley soon. It’s great because I need to learn more about bikes as I’m working on this series. I want the motorcycles to be believable in the comic. And I want to learn more about bikes – even though my artist brain can barely comprehend mechanical things, I find motorcycle anatomy very interesting to draw and want to know more about it.

SM: If you envisioned a soundtrack for reading The Humans, what would be on it?

KMK: We are actually doing a soundtrack, so we don’t need to imagine one. Tom and I always have wanted to do a comic with a record in the past, so when we teamed up for this project, it was a no brainer! With our self published issue #0 we released a limited edition 7″ vinyl record as a soundtrack. 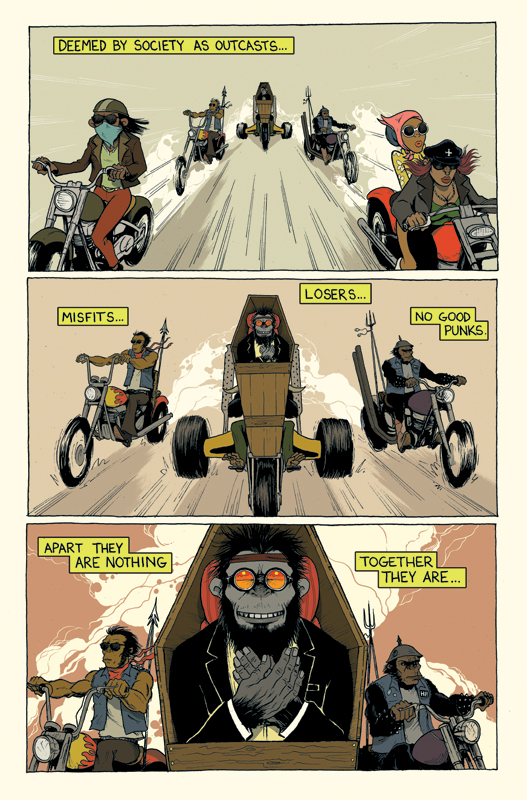 And now with the Image Comics series, we will be offering a couple songs for free download with each issue. A sort of digital 7″ for each issue. We’re getting a lot of original songs made specifically for The Humans from a diverse selection of bands, like: Zig-Zags, Smelly Tongues, the SPITS, Boss Kong, Goblin Cock, Mueran Humanos, Gary Wrong Group, Coliseum, Wizard Rifle, Speed Buggy, DeGreaser, EP & the Die Rotzz, Greh from Hivemind, and a few others we’re still figuring out! It’s exciting and inspiring to work with these bands and it keeps ups amped for the series! I cant wait for people to hear it all!

Check it out here: https://soundcloud.com/the-humans-soundtrack

SM: What is your favorite part of illustrating The Humans?

TN: Challenging myself to draw new things all the time! Until two years ago, I’d barely ever drawn any vehicles in my comics or art. It’s not really something I avoided – they just didn’t happen to come up in my previous comics and art. But I really love getting more into the details of the motorcycles as I’m learning to draw them. In issue #5 I have to draw lots of semi-trucks and dune buggies and stuff and I can’t recall if I’ve ever drawn a semi in my life! But I’m looking forward to figuring that out this month.

I also love that this is the first time I’ve been working on my comics full time. I get up and draw monkeys and motorcycles all day and it’s the best. It’s also really great collaborating with another artist – Kristina Collantes is doing the coloring and I love to see how she transforms my pages. I love my black and white drawings for this book, but they really don’t come to life to feel like a real comic book until Kristina’s colors complete the picture. 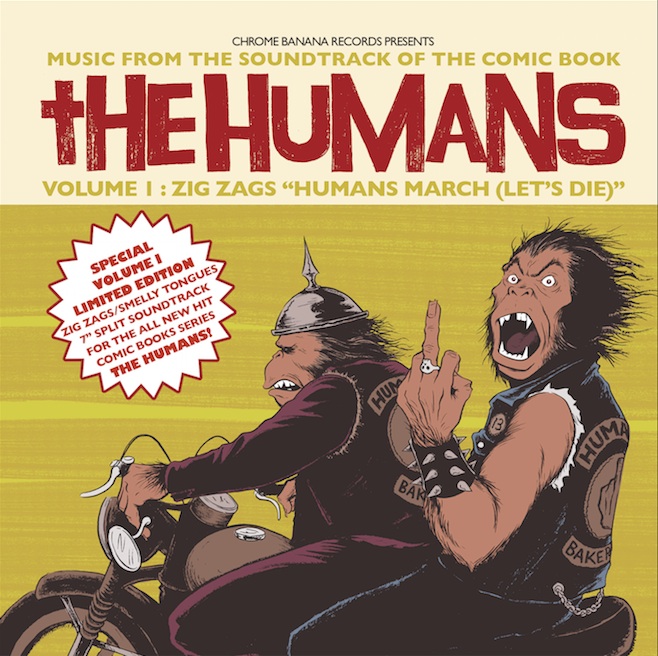 SM: With Image Comics publishing the book, have they had any influence (directly or indirectly) on the stories that you, Keenan, and Kristina want to tell in the series?

KMK: Nope. They’re very hands off, letting us do our thing. Working with Image Comics in no way has changed our initial ideas. But I think we’re all inspired by this chance to make a comic that is really going to get out there! Working with IMAGE has allowed me to reach the biggest audience possible and that’s a HUGE thing! I’m personally very happy to be working with Image. They’re the only ones in the mainstream really doing it right. They like to tell stories. They love genre. It is a perfect fit.

SM: What are some of the next conventions and shows you’ll be at so people can buy (more) of your stuff in person?

KMK: You can catch us at:

Then we also hope to do several larges conventions next year like, Emerald City, HerosCon, SD ComicCon, TCAF and maybe a couple others….

Well, there you have it! Be sure to pick up your copy this Wednesday, November 5, and stay tuned this week for my review of The Humans #1 on Comicosity. In the meantime, rock out to some tunes on The Humans soundtrack Soundcloud!