Captain Marvel is a storied and proud title in the world of comics, held by many fan-favorite characters. This July, Marvel Comics crowns Carol Danvers as the new Captain Marvel under the guidance of writer Kelly Sue DeConnick. Kelly Sue recently took time to discuss the title with Comicosity and what readers can expect from this Captain Marvel. 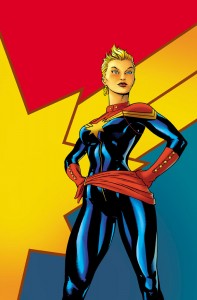 Aaron Long: Best to start at the beginning…how did you get involved with the Captain Marvel title?

Kelly Sue DeConnick: The earliest email I have filed on the subject is dated May 2010 and it’s not the first time it was discussed — though at that point I was registering my interest in a Ms. Marvel series focusing on her as a pilot.

At this point, I’m not sure what would be the actual inciting incident!

AL: You mentioned your original discussions focused on Carol as a pilot. In Captain Marvel will she be returning to active duty in the military?

KSD: No! But what a great question.

No, she will not be active duty military. Er… not officially anyway.

AL: In my opinion, Carol Danvers has been one of the most under-used powerhouses in the Marvel Universe…with the announcement of Captain Marvel can fans assume this will no longer be the case?

KSD: Can I assure you she won’t be under-used? Hm. Well, I think we might have to agree to disagree on this one, man. I think she’s played some important roles over the years. I think she’s been top tier.

I can assure you that she will indeed be the protagonist of her titular title, if that is your concern. 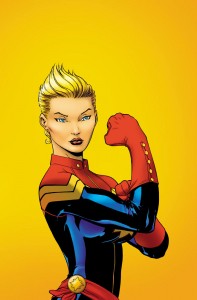 AL: Carol has held the title of Ms. Marvel for many years, can you discuss what causes her ascension to Captain Marvel?

KSD: It’s not a promotion, exactly — it’s picking up a mantle. At the same time, I’ve said “she deserves this” so I can understand why you’d call it an ascension.

AL: What do you feel has changed in Carol that she is ready to take on the responsibility of the Captain Marvel mantle?

KSD: Something clicks for her. She has a conversation with someone she trusts who has the courage to speak hard truths to her and it clicks.

AL: The last Captain Marvel was involved heavily with the Cosmic side of the Marvel Universe. Will this title be primarily Cosmic or Earth-based?

KSD: Primarily earth-based, though I have a fondness for the Cosmic and would never rule it out.

AL: Carol has a storied past with several villains, in particular Mystique. Will we be seeing the shape-shifter again or can you discuss the other villains Captain Marvel will be taking on?

KSD: Let’s say just this: if I get to stay on the book long enough, I will not be able to stay away from Mystique. She’s a particular favorite of mine, as it happens.

AL: Carol has a close-knit group of super-friends and is a member of the New Avengers. Will teammates and friends be frequent visitors to the series?

Keep your eyes peeled for Captain Marvel #1, in stores in July!