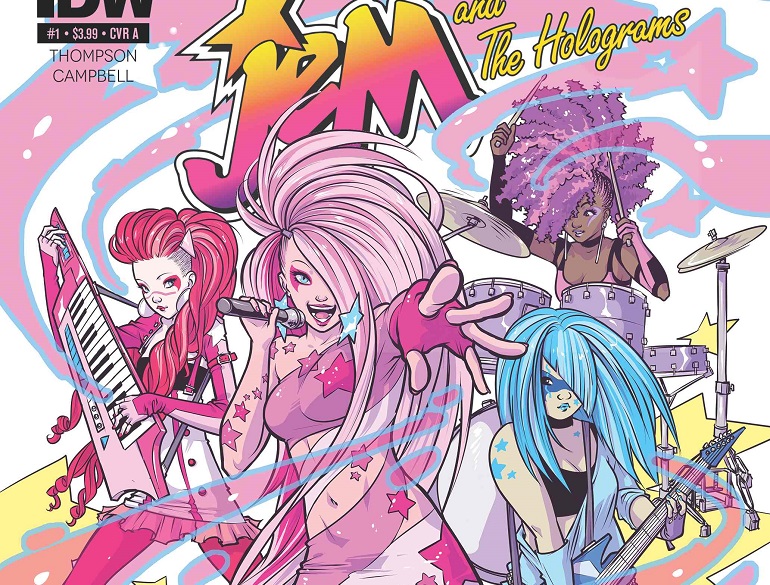 After almost 30 years, 80’s cartoon and cult classic Jem and The Holograms will be re-launched in a new series from IDW. Written by Kelly Thompson, with art from Sophie Campbell, Jem has been updated to welcome a whole new generation of fans and looks to be as diverse and outrageous as the original.

With only 2 weeks until its release on March 25th Kelly has been kind enough to take time out of her busy schedule to answer a few questions for us. 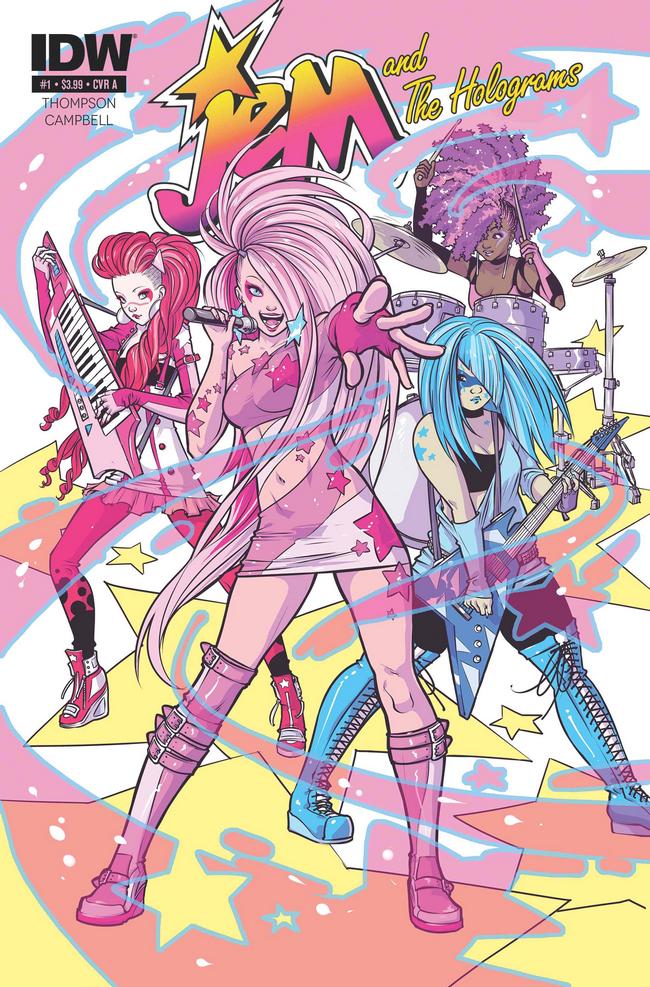 Kelly Richards: Thanks for taking the time to talk to Comicosity. I for one am very excited about this book but for those readers who are new to the property what can you give us a quick primer on Jem and The Holograms?

Kelly Thompson: Sure! Jem and The Holograms are a fictional band and the lead characters of a cartoon created by writer Christy Marx for Hasbro in the 1980’s. Jem is the alter ego of Jerrica Benton created with the help of a Synergy, a super powerful computer (the ultimate audio/visual system) built by her father. Jem, in concert with her sisters Kimber Benton, Aja Leith, and Shana Elmsford, make up The Holograms. The band also has a fantastic nemesis in a rival band called The Misfits.

KR: What is it about Jem and The Holograms that made you think this is it, this is the book for me?

KT: Well, it would be disingenuous of me to suggest that this book isn’t a huge break for me in comics. Though I do actually have a degree in comics from SCAD and a graphic novel (Heart In A Box) forthcoming from Dark Horse this summer (with co-creator and artist Meredith McClaren) Jem and The Holograms #1 will actually be my first published comic except for a short in Womanthology. So, yeah, it’s a huge break for me and I’m very lucky that IDW and Hasbro liked what Sophie Campbell and I put together in our pitch and were willing to take a bit of a chance on me. But when I found out IDW was launching a Jem comic book I was SUPER pumped and would have moved heaven and earth to get it regardless of it being a big break for me. Sophie and I had been looking for something to collaborate on for a long time and this just seemed like the perfect fit…a little bit of destiny even.

KR: As we have seen in the previews, The Holograms have a very different look than the original cartoon. What else have you done to pull them out of the 8o’s? 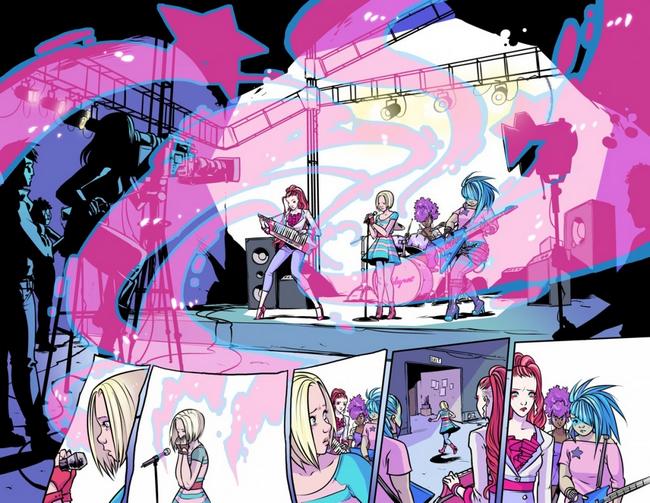 KT: I think that what’s key to me about Jem is that it was really modern and forward thinking for its time, so to me it’s really true to the original concepts and ideas of Jem to make them modern. Modern in 1986 meant being outrageously 80’s, modern today means being magnificently 2015. The characters themselves I think (and hope) are largely unchanged from what Christy Marx created nearly 30 years ago, just updated to reflect a 21st century context. There’s been a huge change in celebrity and music in those intervening years, in how we view and share media, in what fame means. So we’re excited to be exploring those changes with these characters.

KR: With the target demographic for this book being predominantly female, what sort of themes are you looking to explore?

KT: I suppose technically our demographic is predominantly female, but one of the best things about Jem was that it was always about diversity and as a result of being so many things—fashion, fame, action, adventure, sci-fi elements, you name it, it drew a really diverse audience, and I hope we can do that too.

There are obvious themes of duality and self in Jem, specifically as pertains to Jerrica/Jem, but also more generally in any scenario where you have a real life and “performance.” Jerrica is particularly superhero-like in the sense that she has created an alter ego to deal with the “super” elements of her life. Many celebrity aspects of being a rock star share themes with superheroes, so all of that is really interesting to explore. We’ll be looking at what fame does to you, or can do to you, especially if you’re young and don’t know who you are just yet. Jerrica has created a hologram—a literal perfect woman—in order to cope with the stress and pressures of being a star. In order to exist in such a public and exposing way, she had to actually create someone else to do it for her, like a crutch, and there are powerful, important, and somewhat dangerous ramifications in those actions. There’s a very narrow standard of beauty that women especially are held to and Jerrica’s response to those insane demands seems a little extreme on the surface but actually makes a lot of sense when you think about it. What better way to protect yourself from all the horrible things that come with fame than to just be someone else? So all this stuff is really interesting and have a lot of layers. 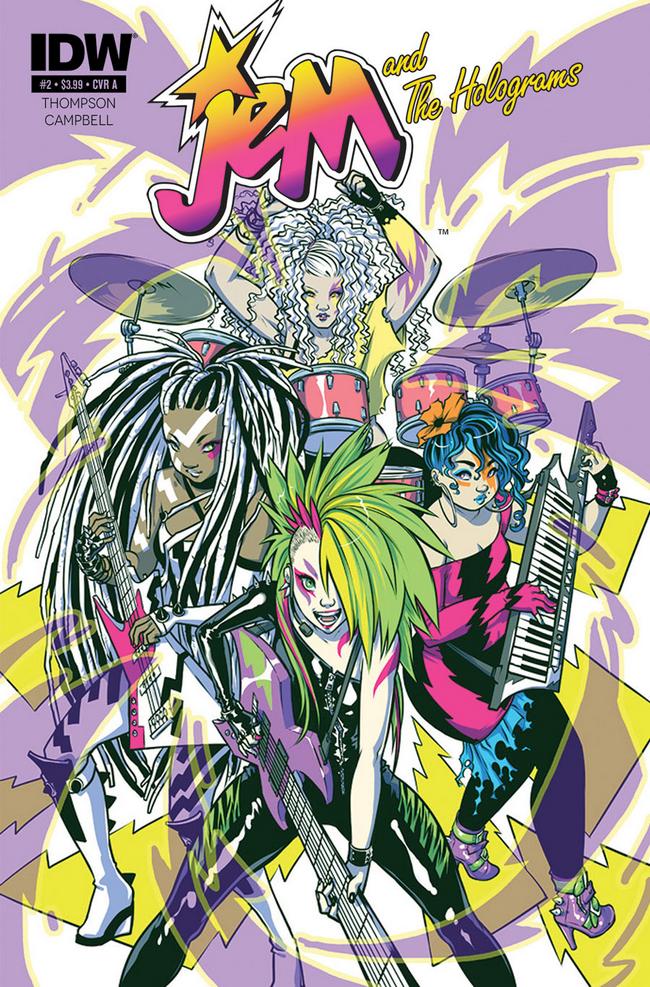 KR: Everyone was delighted to hear that Kimber and Stormer will be a couple and you’ve previously spoken of your intentions to include more LGBTA+ characters. What is it about Jem and The Holograms that makes such a good platform for diversity?

KT: Well, not everyone, but yeah, a lot of people are really excited and so are we, obviously! One of the greatest things that Christy Marx did with Jem was to make it wonderfully diverse, especially for its time. That said, given the audience – it was of course a Saturday morning cartoon for kids – and time period, there were obvious limitations. Hasbro and IDW have been really wonderful about letting Sophie and I double down on diversity in ways that make sense for a modern Jem. It’s been so great

KR: A lot of the work you do outside of comics could be considered quite solitary, how are you finding collaborating with Sophie Campbell?

KT: Yeah, writing novels is a certainly a very different and much more isolating experience, although I have been lucky to work with artists in pretty great ways on both my novels. Though there are some benefits to working alone, working with a collaborator, especially if you’re lucky enough to work with someone like Sophie, It’s pretty much all upside. Writing a script and then seeing the adorable hilarity that Sophie can turn it into, all while still telling a clear story and hitting all the emotional beats, well, it’s more than any writer could really hope for. I’m extremely lucky.

KR: As a woman and a reader of comics it’s quite exciting to see so many female creators and comics with female leads doing so well. How does it feel to be a part of this? Do you feel like there is a lot of extra pressure on you?

KT: It is indeed a really exciting time for women creators and characters. We had some dark times five or so years back in comics and I worried we were headed for a pretty awful future, but I think thanks to the sheer number of talented female artists and writers creating great work in comics and the massive number of female readers and highly engaged community, the landscape has really changed. I feel very lucky to have been a part of driving that needle forward in even a small way on the “journalism” side of things with She Has No Head!, and now to be a part of the creator side, I mean not to be too saccharine, but it’s very dream come true time for me. I don’t really think there’s any pressure for me to be a good “woman creator” though, just to be a good creator period.

KR: Thanks again for talking with me. Is there anything else that you would like to share with the Comicosity readers that I can tease out of you?

KT: I think that’s probably it, I guess I’ll just say buy Jem and tell everyone so we can keep it going forever. There are a lot of crazy fun things we want to do, so long as they’ll keep letting us do it!

A Jem and The Holograms interview with Jem herself is available on the IDW site here: http://www.idwpublishing.com/here-comes-success-the-jem-interview-by-rio-pacheco-the-score/

Don’t miss this episode of THE HANGOUT featuring Kelly Thompson while you’re at it: https://www.comicosity.com/the-hangout-featuring-kelly-thompson-february-9-2015/