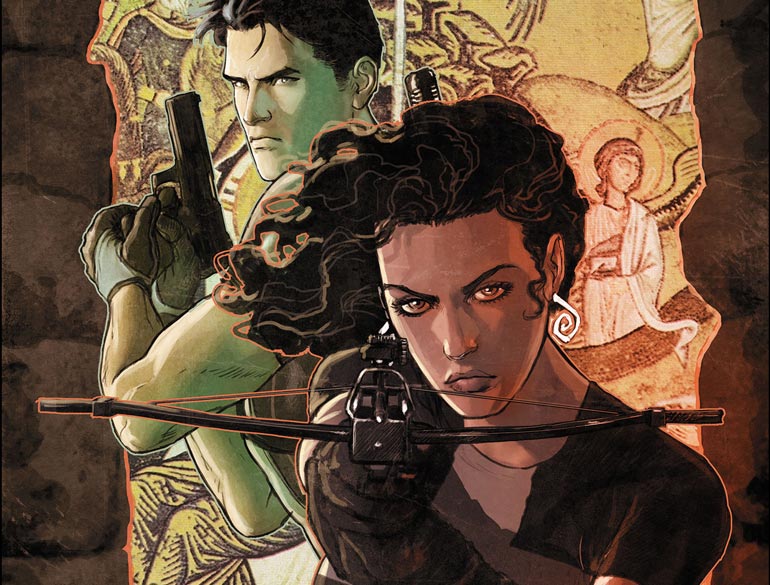 To say fans were pretty universally skeptical when DC Comics announced the “death” of Nightwing at the end of last spring’s Forever Evil event would be an understatement. Fast forward one year and writers Tim Seeley and Tom King are riding high on a massive love of Dick.

That is, Grayson has become one of the publisher’s most popular books, and the gentlemen are here to share their thoughts on the latest issue, the spy in question, his partner, and just why they’ve made Dick Grayson so so sexy.

Matt Santori: Thanks so much for taking time out for Comicosity, Tim and Tom! Looking back now, Grayson was a bellwether for what would end up being a huge change to the Batman line as a whole. What were your expectations going in and has your perspective changed at all since? 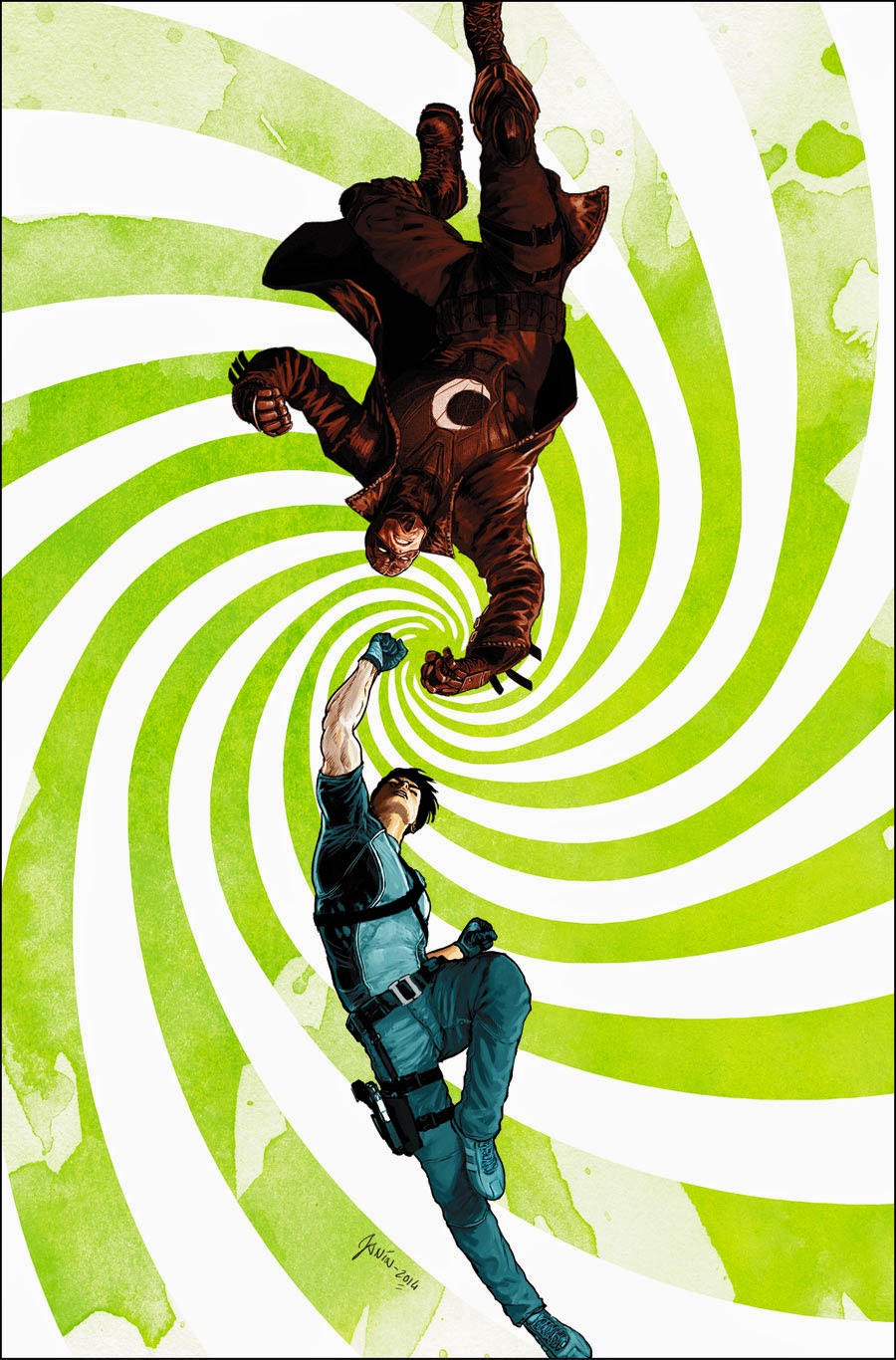 Tom King: This was my first series. This is my favorite character. My expectation really was that at some point the editors would all reveal that this was an elaborate scam by DC to get me to renew my  subscription to Team Titans, which I had sadly let lapse in 1993.

Mildly more seriously, I probably expected DC Comics to be fairly risk adverse, to want fairly conservative, villain-of-the-month comics. Now, I was ready and willing to write the crap out of that kind of comic (see above), so all was good.

Instead though, our editor and mad genius leader, Mark Doyle said to Tim and I that he wanted us to do a comic that we would love, that we wanted to read, that really embraced both the super hero and spy genre. There was no talk of how many splash pages we needed or plot points we had to hit to satisfy Hollywood or all the other horrors as a fan you always imagine lurk between the panels. You’re good writers. Go make good comics.

That was it. Seriously. That happened. I was on the phone. I heard it.

Then, to add more crazy sauce, we met with DC higher ups, and they repeated that exact stuff to us. So maybe it was true. So I paid up on my Team Titans and got to work. Thank Kirby people actually bought it.
​​
Tim Seeley: Ha! Yeah, I honestly didn’t know what to expect going in. When editor Katie Kubert told me that DC wanted to kill Nightwing, and make Dick a spy, I think my first thought was just “Well, that’ll piss people off.” 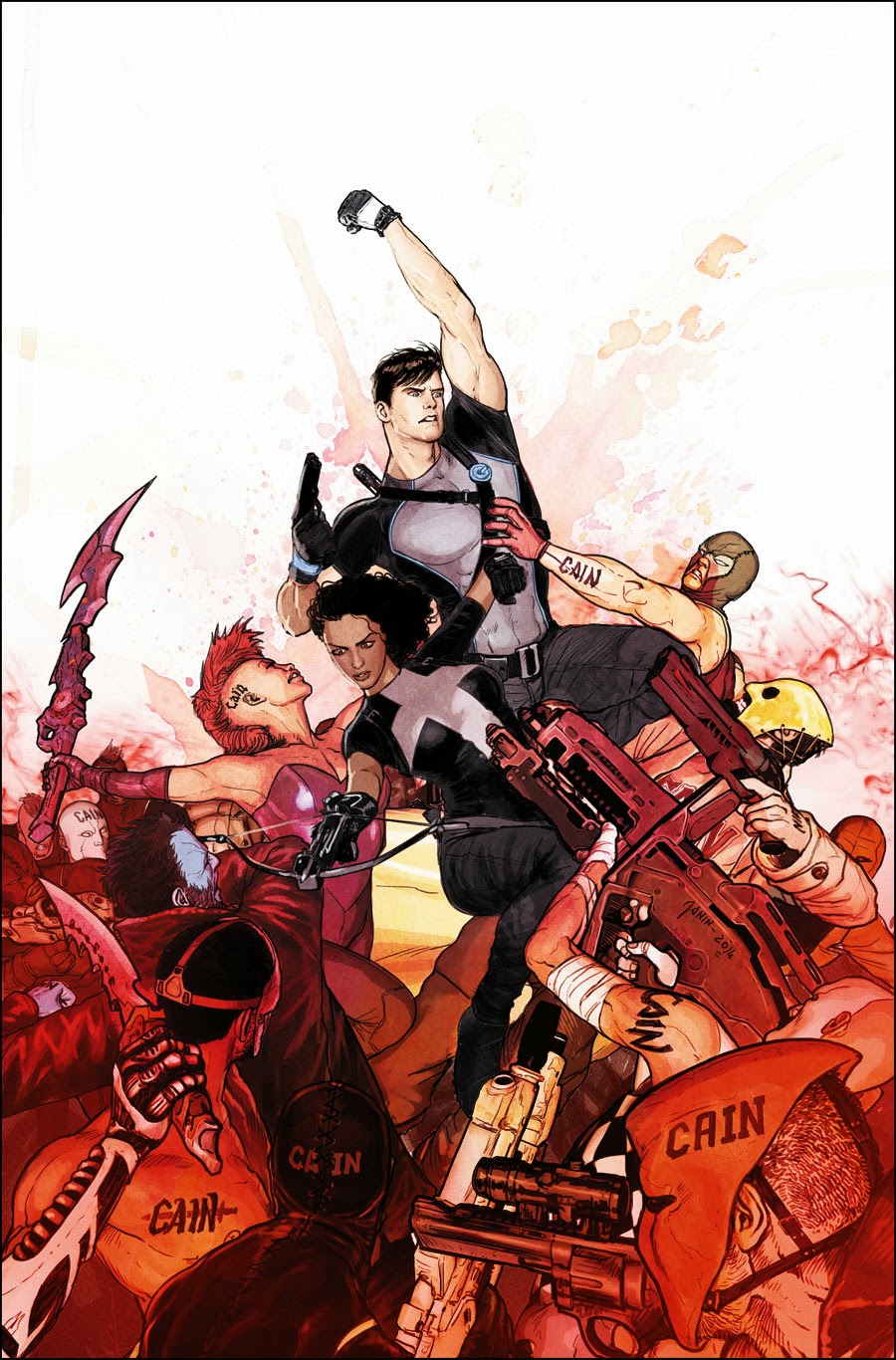 MSG: Eight months in, you have Agent 37 and the Matron working together like a well-oiled machine. Was that always your intention or do you see them as antagonists in any way still?
​​
TK: Well, there’s basically a ticking time bomb at the heart of their relationship. Grayson has been lying to Helena from the moment they met about his true intentions in joining Spyral. Helena doesn’t know that Dick is still in touch with Batman, that he joined Spyral for a specific purpose and once that’s done, he’s done. Tick. Tick. Tick.

The closer Dick and Helena become, both on a professional and personal level, the louder and louder that ticking is going to get. Soon, it’ll be deafening.
​​
TS: Our intentions were always to play with the idea that the two of them are really different, but so were Batman and Robin. Dick knows how to work with someone like Bruce. He knows how to fight side by side with someone like Bruce. The problem eventually of course, is that Helena isn’t exactly like Bruce.

MSG: Helena, in particular, seems to have taken a rather radical departure in the New 52 — although not in the way many fans might assume. Her origin, told in part in the recent Annual, didn’t include the death of her family. Was that simply a case of not mirroring Dick’s origin, or the first step to something much more complex?

TK: Helena’s origin as told by the great and crazily underrated team of Joey Cavalieri and Joe Staton is pretty tight. That it mirrors Dick’s (and Batman’s) origin is one of the things that drew me to this character. A successful, smart, powerful, confident woman with a background as dark as Bruce Wayne’s — pairing her with Dick Grayson creates immediate and complicated chemistry, something we only started to address in Futures End. 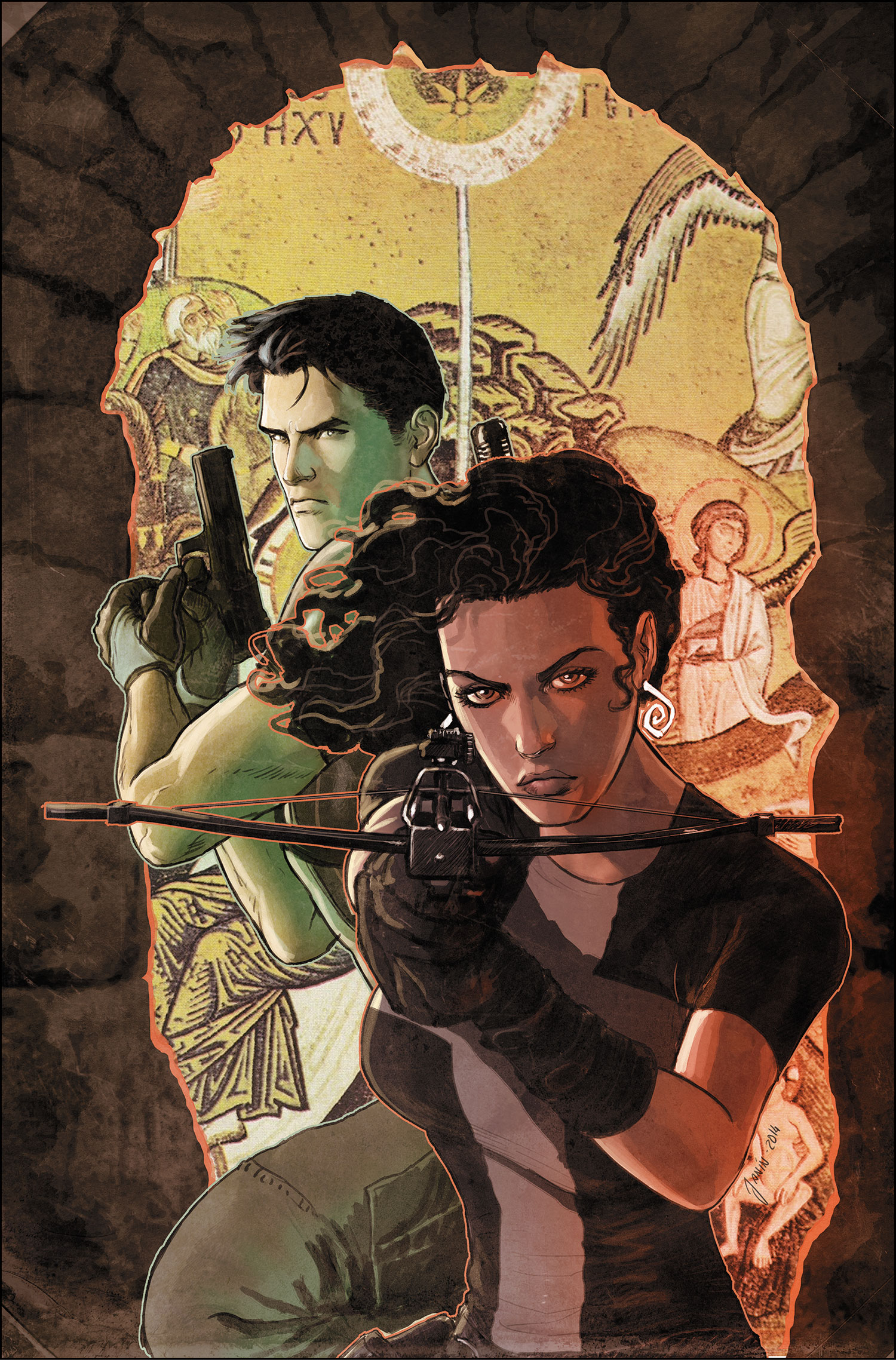 Helena’s New 52 origin will slowly come out as the series progresses, but it will draw quite a bit from the energy and themes of her original. I have a Staton Huntress sketch sitting over my writing desk; if I mess this up, I’m pretty sure it’ll find a way to Harry Potter itself to life and shoot me.

TS: We want the heart of the Huntress character to be intact, but we want to surprise readers with the hows and whys. Cuz, why not? NEW 52!

MSG: Speaking of origins, in this issue, Dick actually makes a distinction between his moves as Robin and those he used as Nightwing. What was the thought process behind that difference?

TK: To me it’s sort of a metaphorical commentary on Dick’s ability to evolve and yet stay true to his core, the essential, cool contradiction at the heart of the character.

As Robin, a kid trained by Batman to fight beside Batman, his fighting style was different than the one he used as Nightwing, a hero out on his own. That Dick can still call on this original style, that he then uses that style without hesitation or angst to save people, is what I love about this character.

Yes, he’s Grayson the super spy, but he’s also Nightwing, he’s also Robin, and unlike a thousand other mopey superheroes, he’s okay with that.

TS: My read was always that Robin was trained to fight alongside Batman… to be the youthful, exuberant energy to Batman’s focused grimness. I figured that stepping out onto his own as Nightwing came with a new approach. More improvisation. And… I think about this stuff too much.

MSG: Midnighter has been shaping up to be quite the anti-hero/antagonist for Dick. Why was he the choice for you gents, and how do you see his motivations as differing from Dick’s own?

TK: Midnighter was the brilliant Tim Seeley’s brilliant idea, and when I saw it, all I could say was, “of course.” He’s a version of Batman who’s not Batman, and by pairing him with Dick Grayson, Batman’s partner, we can highlight aspects of both characters that I think people haven’t seen before. You get these two together and a thousand Freudian issues will instantly flow into a pretty awesome super hero fight.

As far as motivations go, I see them as good men working for perhaps not good organizations, soldiers on a field of battle who are not sure what they’re fighting for but know they’re supposed to be fighting. In that way their motivations are rather similar.
​​
TS: Midnighter represents a more cynical time in superhero creation which makes him an awesome foil to the optimistic origins of Robin.

Q: Many female and gay fans (myself include) particularly loved Midnighter being able to identify Dick by the shape of his ass. What are your thoughts on Dick as a sex symbol to these “non-traditional” demographics, and how does it factor into your writing?
​​
TK: I’m not sure comics, especially super hero comics, are supposed to have a “traditional” audience. I just don’t think that’s what comics are for, or at least it’s not what I want them to be for. 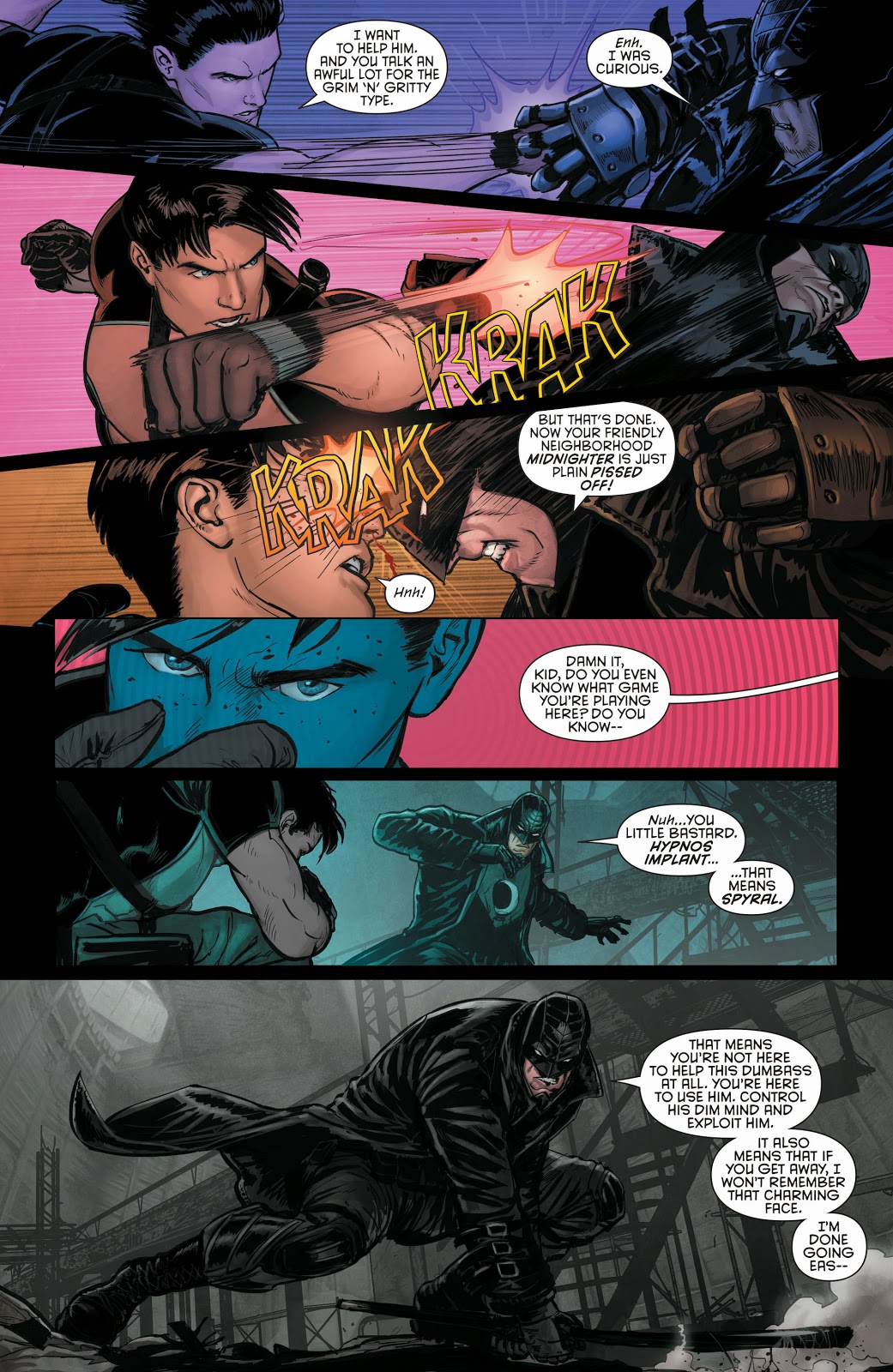 I think the love of comics derives from the pain of being an outsider, of being in some way rejected from the “traditional.” This medium, this genre — for a complicated set of reasons — can alleviate that hurt. I was that kid who felt different than everyone, and somehow when I was reading about Batman punching KGBeast, it seemed so clear that that difference wasn’t a bad thing; it was actually kind of a cool thing.

If you’re writing super hero comics and you’re not trying to appeal to “non-traditional” demographics, then you’re doing it wrong. Dick Grayson is a damn sexy man. Writing a sexy Dick Grayson that appeals to “non-traditional” readers is not hard; it’s not even a choice. That’s just the job.
​​
TS: I’ve always considered myself an equal opportunity exploiter. Superhero comics shouldn’t be afraid to be sexy, escapist fun, for everyone, male, female, gay or straight. The fact that sexiness has become such a no-no in recent years is a problem Tom and I intend to remedy. Because, we — together — are sexy.
​​
Q: Along those lines, Mikel Janin lights the way pretty significantly. What’s been your favorite working moment with Mikel and what’s he been bringing to the book no one else could?
​​
TK: How do I pick one? Every page in Grayson #5…and that cover… and…

Okay, let’s start at the beginning. In Grayson #1 page 2-3, Dick throws his gun like a boomerang. When I first saw this in Tim’s script, as a guy who used to occasionally have to carry a gun for his job, I thought that could be… awkward.

Then I saw what Mikel did and… I mean it’s crazy… it’s insane — Dick throws the gun into an upcoming panel (the future essentially), where it bounces and comes back to the original panel and hits its target. Not only is it coolest thing ever, it’s the coolest thing ever and it shatters the rules of the medium, or rather it rewrites them. 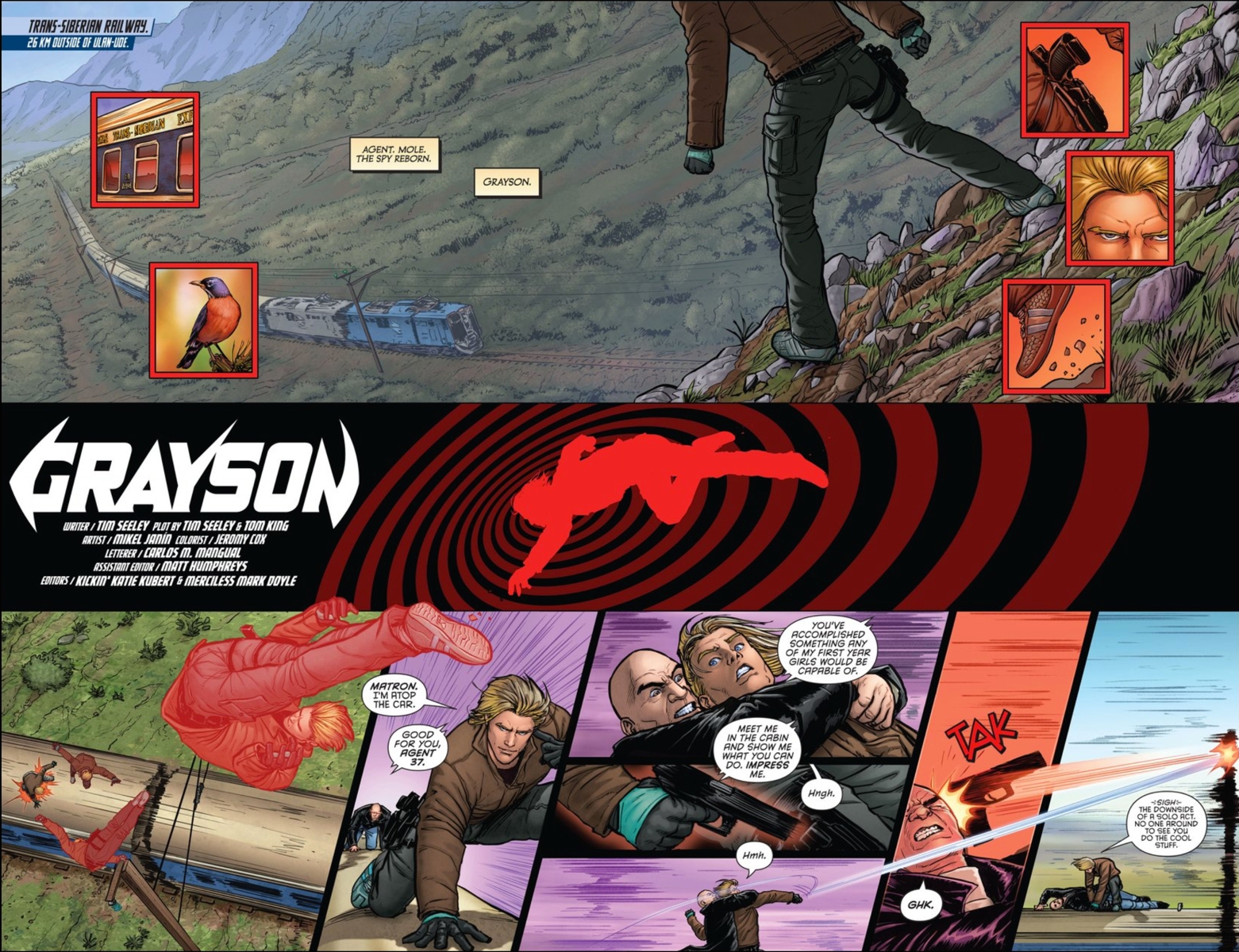 None of that was in the script. That was all Mikel. And he keeps doing stuff like that every issue. I think that points at what he’s bringing that no one else could. His draftsmanship and figures are perfect, but they’re so perfect they could be stiff. However, by manipulating the tools of cartooning, he is able to add that motion and emotion that really shouldn’t be there in a guy that detailed. 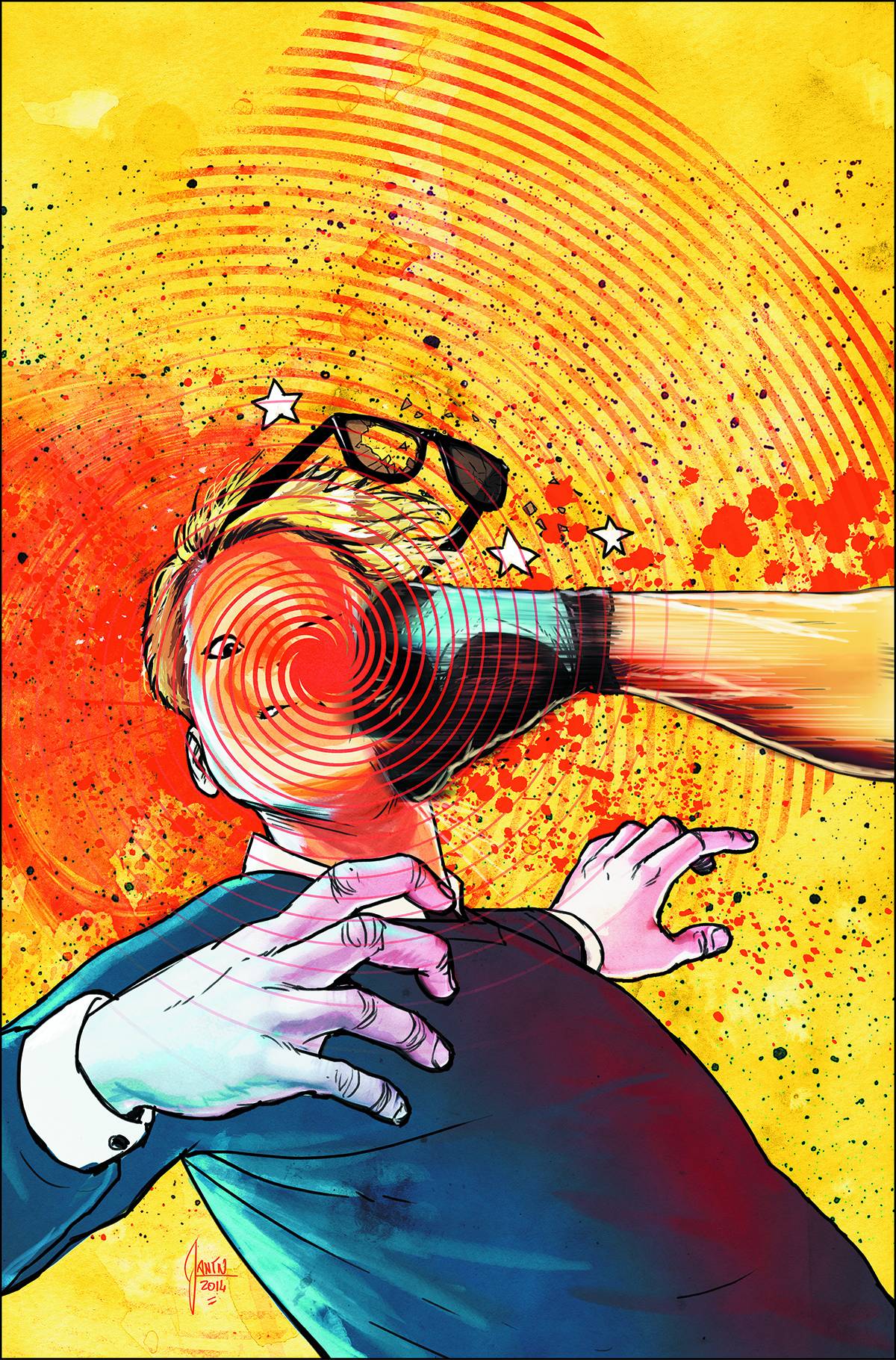 All that, and he draws the definitive Dick ass.
​​
TS: Yeah, I love that scene. My favorite Mikel moments all involve Helena. I have a huge crush on his rendition of her. There’s a scene in issue #2 where he draws Helena in this raincoat, and she somehow manages to look sexy and badass, almost entirely covered up.
​​
MSG: Lastly, Mr. Minos seems to have a lot more going on behind those glasses than we thought. Any final thoughts or special teases for the Comicosity audience on that revelation in upcoming issues of Grayson?
​​
TK: The problem of Mr. Minos gets to be a very big problem in issues #6-8. Issue #8 will be our huge finale to the first “Paragon” arc of Grayson and will lead to a crazy, heart grasping cliffhanger.

For Mr. Minos’s story, and Grayson in general, we’re working within a world of spies, and as we said in the annual, what spies do is lie. There are a lot of lies in this series, a lot of little bombs we’ve placed throughout the plot. And the ticking is getting louder.

TS: Mr. Minos, like most everything else in this comic, is very complex. He has his own agenda, clearly, and it plays a big part in issues #7 and 8!​

The gentlemen Tim Seeley and Tom King are the men responsible for bringing Dick to comics monthly with Grayson for DC Comics.