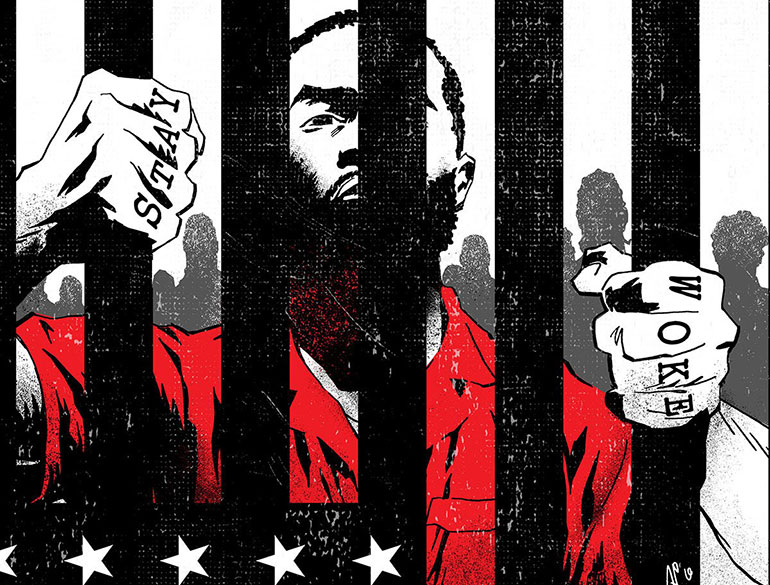 The world changed last year, in more ways than one. A comic by the name of BLACK found its way onto Kickstarter, and ultimately to monthly publication from Black Mask Studio, as a comic where it’s revealed that only Black People can get superpowers!

The series recently wrapped up it’s six-issue run for Book One (and is now headed to collection in October), but the future is so much brighter than that for the creative team. Kwanza Osajyefo, one of the masterminds behind the title, is here to talk about the past, present, and future of BLACK.

Terrence Sage: With BLACK hitting stores in a collected form, how does it feel to get the first part of Kareem’s adventures settled?

Kwanza Osajyefo: So good! We still have to ship out all of Kickstarter editions (which has something special the other edition doesn’t) but It feels really good to have crossed the finish line on this race. 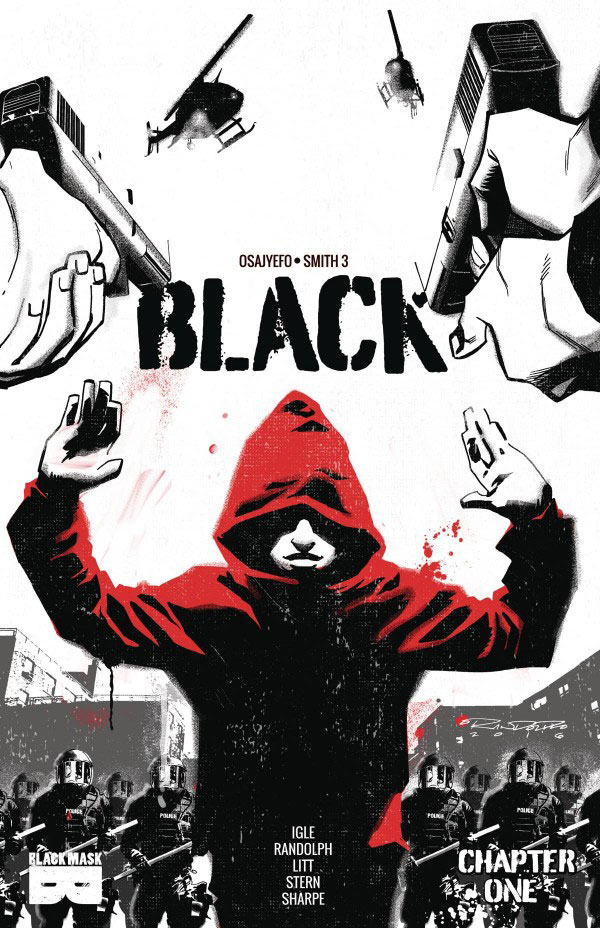 TS: Did you all always plan to continue the world you built or did sales factor into that and so you wanted to continue?

KO: The intention was to always do three books. Since we’d gone through Kickstarter, sales were not really a factor — that influenced creation of the BLACK [AF] interstitial books.

TS: The covers by Khary Randolph feature some amazing imagery of America and Black People in red, black, and white, how did the team settle on the message it wanted to tell with the covers?

KO: The initial cover was Khary’s masterful interpretation of what was happening in the first chapter. I’d expected his signature style but Khary chose to express the disruptive nature of the concept with a Banksy-like design that inspired our collaboration on the rest. 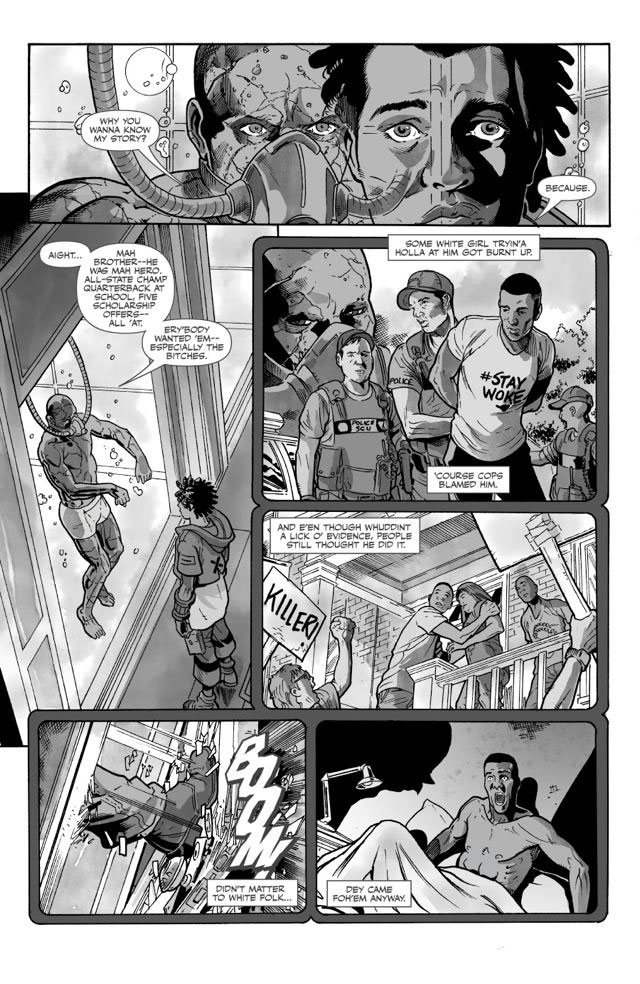 TS: What’s the journey been like for both you and Mr. Smith 3 developing this world from issue one to issue six?

KO: Bizarre and humbling. This is a passion project we are doing on the side that blew up into something much bigger. We couldn’t have anticipated this reception.

TS: In 2017 with Trump, police shootings being a common occurrence, and comics becoming a more varied landscape when it handles these topics…where does the future of BLACK go from the end of Book One?

KO: The concept for BLACK is ten-plus years old, so while it’s sadly relevant, current events aren’t the sole inspiration for the idea. Police brutality has been a part of the black experience since January 31, 1865.

BLACK [AF] books will be deeper dives into this world, in between the tentpole books. 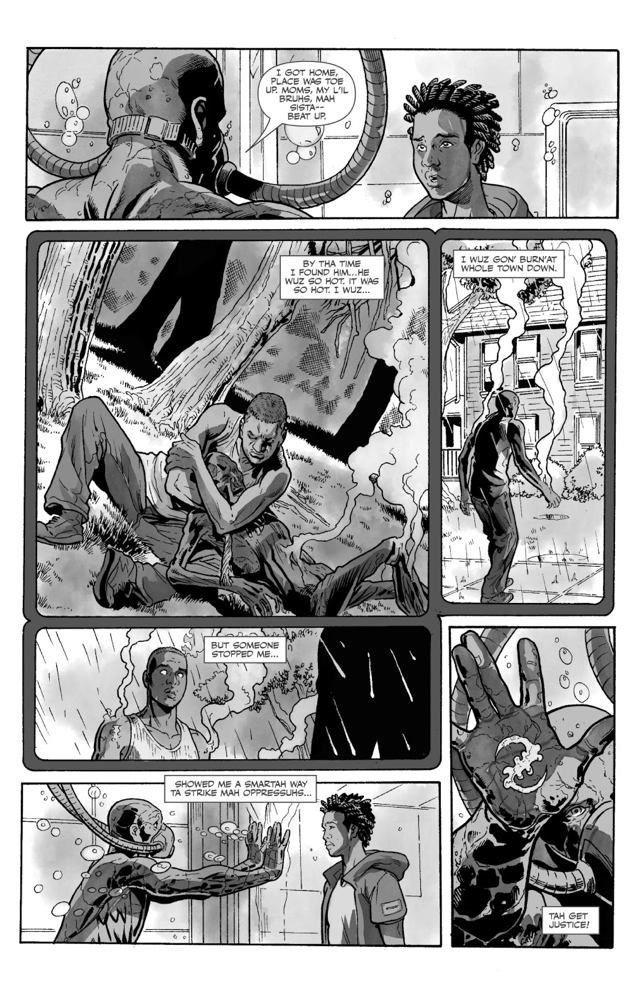 TS: Why the choice of black and white art? Will there be a “in-color” edition of Book One eventually?

KO: I’ve stated that BLACK is whatever the reader brings to it and artistically, metaphorically, that felt like a story that is shades of gray. The BLACK [AF] books will be in color but the original three tentpole books will remain “black and white.”

TS: Throughout the initial run of BLACK, what’s the reception with readers and relationship with Black Mask Studios been like?

KO: Black Mask is a provocateur publisher which aligns with the ethos of BLACK very well. Working with Matt Pizzolo and company has been great, as there isn’t a “company line” to tow or worry about antagonizing an entrenched audience. It’s full-throttle punk rock comics, that have real world context. I think it creates a new experience for readers who are used to status quo or allegorical storytelling. 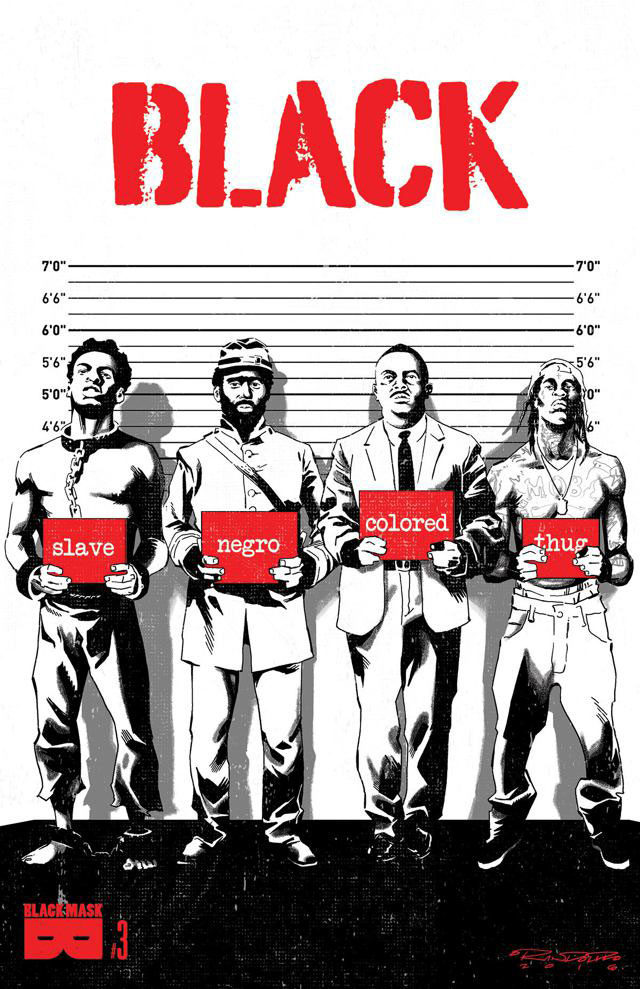 TS: How does it feel for your then Kickstarter project to be optioned and preparing to make the live-action jump in the near future?

KO: Mind blowing! Studio offers started the day we launched the Kickstarter and it’s been a roller coaster ride all along. It’s tough though, because BLACK is the “side hustle” it’s basically been 14-hours days for much of the team – but worthwhile.

TS: Will “America’s Sweetheart,” the next project in the BLACK Universe, continue the message and threads started in BLACK?

KO: Yep. It’s a YA approach within the world of BLACK. It has a different tone and perspective but with the same context. 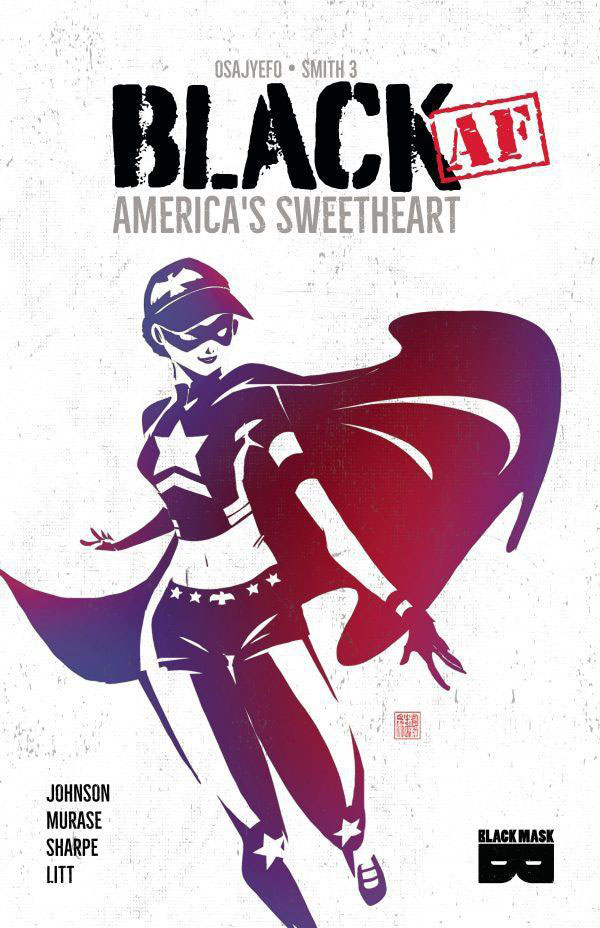 TS: Comic Companies are getting more diverse and representing in the titles and behind the scenes writing and drawing them, what would you want to see more of as comic’s take on heavy subject matter and issues?

KO: Are they more diverse behind the scenes? From what I’ve seen and talked about with others, the creative community of comics has been diverse for a while. But when we discuss “comics companies,” I think we’re often implying the duopoly. They may be diversifying content, and in reaction freelance talent, but stewardship of this industry is still status quo.

I think that is a factor in backlash to efforts for diversity of content. Where there is internal inclusion, we see more integrity of concept. Without these intrinsic influences, that output reads as shallow and commercially focused. The result is more representation, but without inclusion there is a heavier lift on research and knowledge needed. 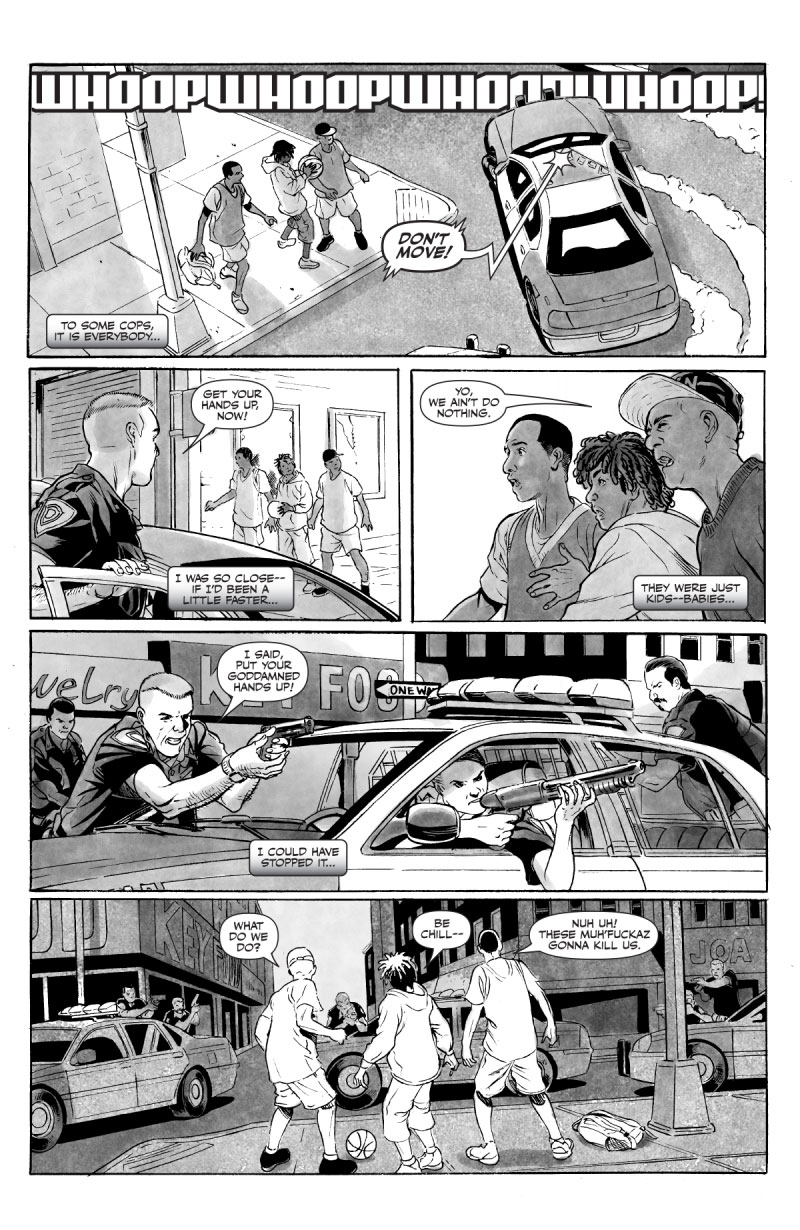 TS: Was there a moment in the story that you would change looking back on the first arc?

KO: I’d probably rewrite most of chapter two, in a more urban setting. Same premise but give even more context to what X is learning about a world in which only black people have superpowers.

TS: How will the world of BLACK continue to expand and evolve through different projects and creative teams enriching the universe?

KO: I’m very curious at some point to hand over writing reins to other storytellers and see where they can go with the concept. It would be nice if BLACK could be a platform for people to explore this narrative voice, not just have it seen through my lens. 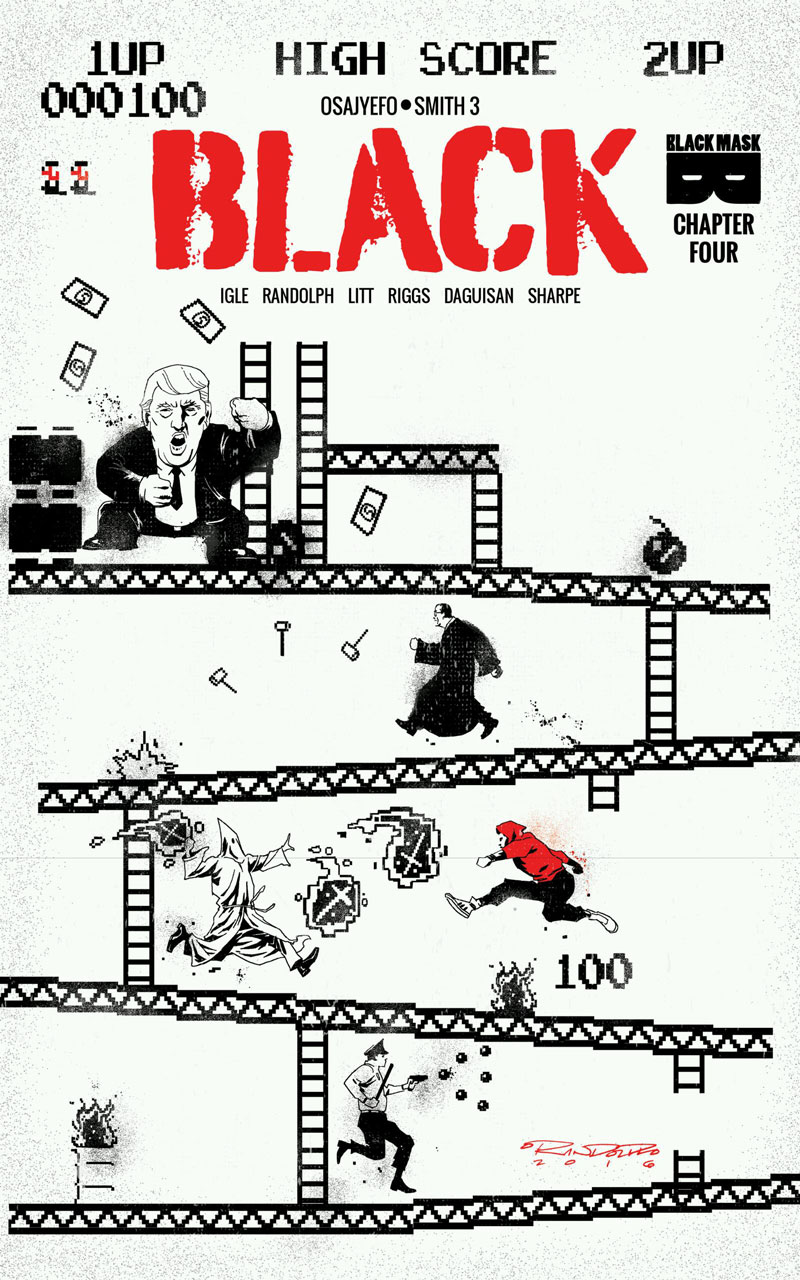 Watch out for the collected edition of BLACK Book One from Black Mask Studio this October, as well as a follow-up special in November: BLACK [AF]: America’s Sweetheart. You can also buy issues of BLACK on Comixology here!