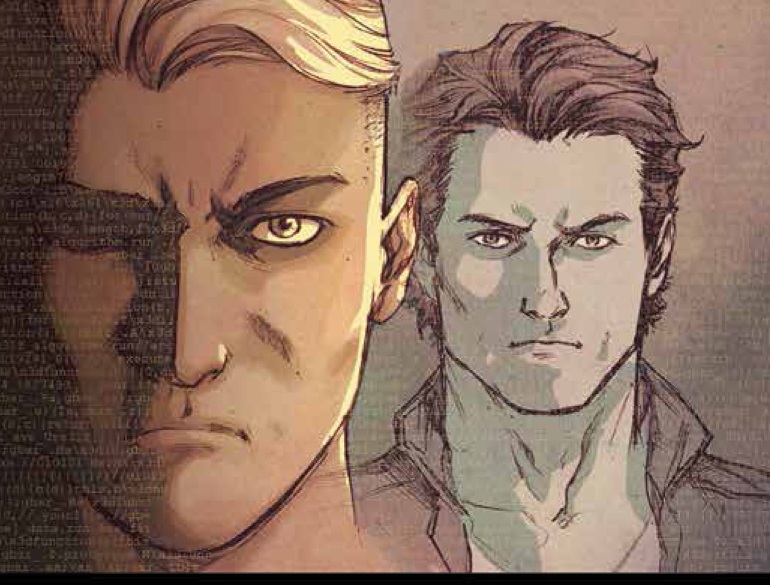 .sve_urs3lf just flashed across your screen. Your life is about to change in moments.

You are in the world of Hacktivist, the series written by Jackson Lanzing and Collin Kelly about the digital age, government surveillance and so much more. Working with Alyssa Milano and artist Marcus To, Lanzing and Kelly bring to life a world that is eerily real and jarring and will cause you to ask some tough questions about the digital world. Lanzing and Kelly were kind enough to discuss the series with Comicosity, and what it means to live in this digital age.

Aaron Long: First off, congrats on a successful mini-series! Let’s start at the beginning, how did Hacktivist come to be? Is this an idea you two, along with Alyssa, had been developing for awhile?

Collin Kelly: Thank you very much, the great people at BOOM!/Archaia have made it a really exciting journey for us. HACKTIVIST started when Alyssa, a UNICEF ambassador, began looking into the world of Anonymous. Seeing what Jack Dorsey, founder of Twitter and god-father to her son, was able to accomplish through his social network, Alyssa had a very interesting idea: What if Jack Dorsey was Anonymous? Knowing that such a vibrant idea might get bogged down in film or tv, she brought it to Archaia, which is where we stepped into the picture. Though Jackson and I are first and foremost screenwriters, Jackson had made a friend in super-star editor Rebecca Taylor with the release of his first book FREAKSHOW (alongside co-writer David Server). When she approached us to become involved, we immediately saw the potential to tell a story that wasn’t just paying lip service to the premise, but which directly confronted the very real concerns of Now: unchecked government surveillance, tyranny in the Middle East, and our rapidly dwindling rights as cyber-citizens in this digital age.

Jackson Lanzing: So we sat down with Alyssa and talked about all of these issues – went back and forth about the incredible things we’d seen in the Arab Spring in general. We talked about Egypt, Facebook, drone surveillance, Cory Doctorow, Twitter and Jeremy Hammond. And as we got excited about the idea of telling a comics story with very direct real-world connections, we also got excited about the four characters that were coming to the forefront. Each character had a foot in one of these worlds – and with the addition of Marcus To’s amazing art, Ian Herring’s vibrant colors and Deron Bennett’s ground-breaking approach to lettering, we began to see the world of HACKTIVIST come to life.

AL: With Hacktivist, you are addressing very relevant concerns regarding online privacy, social media and government intervention. Since the inception of the series to the hardcover release, do you feel much has changed? Do either of you have qualms about being involved with social media based on your research and writing of this series?

JL: It would probably be easier to list the things that didn’t change – the world of technology and social media is fundamentally fluid. There’s an entire press ecosystem just dedicated to making sure we all keep up! Add to that the slow, steady leak of government surveillance activities – from PRISM to drone deployment to direct espionage on American citizens – and we’re lucky if Alyssa, Collin and I can create something that doesn’t find a real-world counterpart before publication. All evidence to the contrary, Ed Hiccox is not based on Edward Snowden. In fact, we were halfway through writing our scripts for HACKTIVIST when Glenn Greenwald published his article. We’ve watched as, over the issue-by-issue publication of the series, events that we thought we’re pure science fiction came to pass in the world around us. It was wild.

And while you’d expect digging deep into the ramifications of social media would turn me against the platforms, the truth is just the opposite. HACKTIVIST ultimately made me a believer in the rapid positive change that social media can inspire and help to organize.

CK: When we took on this project, we knew that the one thing we couldn’t do was lie. To ground the story and make it as relevant as possible meant digging into corners of the internet that most will never visit. While this book is far from a call-to-arms, the threats we’re exploring are very real, and now that we personally have started down this rabbit hole, we know there is no turning back.

AL: Ed and Nate are not your typical Silicon Valley CEOs. What can you tell us about your main characters and what their goals are in Hacktivist?

CK: Ed Hiccox and Nate Graft are the founders of YourLife, the world’s first decentralized social network with the ability to match a user with exactly what they need in order to make their dream come true. At least, that’s the face they present to the world. Secretly, these two best friends are the infamous white hat hacker known as .sve_urs3lf. Feared and respected throughout the hacktivist community, .sve_urs3lf’s most recent exploit is in breaking through an internet embargo put in place by the Tunisian Government, meant to keep their citizens scared and unable to organize. While the rebels on the ground are thrilled, when CIA Cyber Command catches wind of .sve_urs3lf’s actions, they’ll bring down the hammer. Now, our boys are faced with a difficult choice: work for the government, or see everything they’ve built burn. When the two choose opposite sides of the conflict – Nate choosing to work within the system while Ed strikes out into Tunisia itself – our boys will find themselves, for the first time in decades, unable to rely on each other. The way in which these two brothers clash – and perhaps ultimately, come back together – is the beating heart of this book.

JL: Every project we work on, we approach the same way: if we strip out all the genre elements, is there still a character story at the core that deserves to be told? Ed and Nate – and the transformation of their partnership – was something Collin and I were confident we could write with the honesty of life experience.

AL: Much of the story is set in Tunisia. What did this location provide you with to help flesh out the story?

JL: HACKTIVIST deals directly with the intersection of social media and global revolution. So, while Ed and Nate give us the social media angle, it’s Sirine’s story that puts us inside the struggle on the ground. Tunisia was the country that first sparked the massive protest movements of the Arab Spring – the self-immolation of Mohamed Bouazizi spoke volumes about the global groundswell of frustration with corruption and the desire for change. Watching the impact of sites like Youtube, Twitter, and even Facebook on that groundswell was one of our primary inspirations. As such, it was important to us that Sirine not be a footnote – her struggle is at the center of our story, grounding us and connecting us to the actual consequences of .sve_urs3lf’s actions. And that meant we wouldn’t take the easy out and create a country that we could fictionalize with impunity. We knew this had to feel real – Alyssa’s direction above all else was to keep this story fundamentally real. And so we set out to better understand the situation on the ground in Tunisia – and to tell a story that felt true to their ongoing struggle.

AL: For those who have read Hacktivist and those who are about to, can more stories in this world be expected?

CK: As Jackson pointed out, we couldn’t go a week during the production process without some real world event happening that mirrored our supposedly “fictional” narrative. While we were able to draw on many of those elements, the book has obviously been out for months, but the world hasn’t stopped. Every day we’re hearing new stories of government espionage, globe-spanning malware and human rights abuse running unchecked. Whether or not these will be problems for .sve_urs3lf to tackle is a question we’re not yet able to answer, but what we can say is that – to us – their story is far from over.

JL: Every day brings new inspiration, new problems, and new solutions. Much like the real-life hacktivists who risk life, limb, and liberty to uncover the truth, Ed and Nate’s work is just beginning.

AL: Any final words for Comicosity’s readers regarding Hacktivist?

JL: HACKTIVIST is an unusual comic to be sure. There are no superheroes, no hitmen, no spaceships, no monsters, no private eyes. We had no idea how the comics audience would react to our story – and we’ve been incredibly humbled at the response so far. Thank you for the support, for the reviews, for the shares and the likes. And those of you that haven’t taken the plunge yet: good luck down the rabbit hole.

CK: We’ll meet you at the bottom.

Hacktivist can be found in stores now in hardcover from Archaia Entertainment.