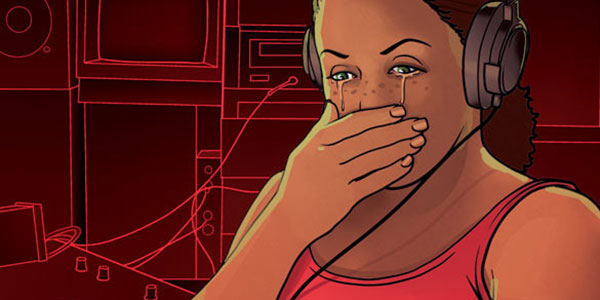 Writer and illustrator Larime Taylor joins us to discuss his creative process in developing the independent comic book series, A Voice in the Dark. A series that originally was funded exclusively through Kickstarter, A Voice in the Dark is making the move to Image Comics’ Top Cow Productions this November. Featuring a young college freshman as his protagonist, Taylor surrounds the central figure of Zoey Aarons with a strong LGBT supporting cast, and hits upon issues of race, disability and gender. Ever since she can remember, Zoey has felt the urge to kill. For eighteen years she resisted those urges and fought to be someone better than her base instincts would allow. In a moment of weakness and anger, however, she let go and took a life. That hazy Seattle summer day still haunts her, and as she begins college far away from home, she’s afraid that she will kill again. 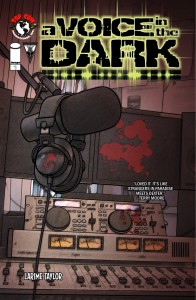 J. Skyler: At what age did you begin thinking about writing and illustrating as a career goal?

Larime Taylor: Off and on all throughout my life. Only seriously for the past five years or so, and at first only as a writer. I come from a stage writing and directing background. Drawing my own book is relatively new, although I’ve been a caricature artist since I was 14.

JS: As a disabled artist, you’ve stated you draw by using your mouth. Did you ever feel alienated or obstructed from learning how to draw or pursuing it as a profession, considering it is almost exclusively marketed and perceived as a talent for those living without disabilities?

LT: Obstructed in as much as my disability makes it harder for me. I have very limited range and reach, so I constantly had to turn the paper, change the angle, move it around. Technology has only really caught up to my needs in the past four or five years, and drawing digitally has removed all of those obstacles and barriers. I can do so much more now on my computer than I can on paper, just because of the ability to rotate images, zoom in and out, and slide the image around.

JS: Are there significant difference in technique using your mouth as opposed to someone who uses their hands?

LT: I really don’t know, having never drawn by hand. I’m aware of some differences, I guess. Because my face is so close to the work, proportion and scale has always given me trouble, but zooming in and out helps me keep perspective. Things like that.

JS: Do you have any words of advice or encouragement for aspiring disabled artists?

LT: Never take no for an answer. Never let someone else tell you what you can or can’t do. Decide for yourself.

JS: Is A Voice in the Dark your first published work?

LT: It is. I had a book that got picked up by a publisher, but I was just the writer. I couldn’t afford the penciller anymore, and my wife became too sick to color it, so it’s been in limbo for years. I do everything on this current book  precisely because of that experience. I want it all on me. 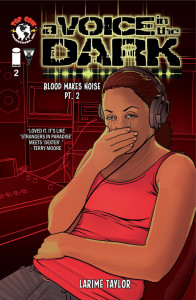 JS: Typically, when people aspire to write great works of fiction, one of their primary goals is to write an awe inspiring protagonist that everyone can identify with. In rarer cases, authors center their stories around villains that embody the absolute worst traits humanity has to offer—someone the audience can love to hate. You’ve done neither with Zoey Aarons, creating character that most people would be reluctant to embrace, but at the same time is not beyond sympathy. What inspired you to create her?

LT: I like flawed characters. They have room to grow, and growth is a part of plot. A character that’s great and wonderful isn’t easy to identify with, for one thing, and they have nowhere to go. Take Superman. The ultimate boy scout, the only stories of his I’ve found interesting are those that play on the loneliness and alienation of being, well, alien. He’s perfect in every other way. Plus, flawed characters are just so much more fun.

Zoey’s closer to an anti-hero. I hope that she’s relatable, because in most ways she just like most of us when we graduated high school. She doesn’t really know who she is yet, or what she wants to do with her life. She’s dealing with self-doubt, she has no direction in life, and she’s at a crossroads. I think we’ve all had periods like that in our lives. She’s really a pretty normal teenage girl. And yet, she isn’t. There’s the compulsions, the animal urges, and she’s afraid that she’s becoming a monster. She desperately wants to have a happy, normal life, but it’s probably not in the cards.

In general, the character started as a twist on the old horror tropes. The ethnic girl always dies first, so I decided she’d be the survivor. Then I decided that she survives because she’s actually the killer. It was all going to be parody, very tongue-in-cheek, with me taking stereotypes and turning them inside out, but somewhere along the way I realized I had some real, serious material to work with.

We all have our little addictions and compulsions, some bigger or more serious than others. Hers are pretty serious. The struggle against those urges is the core of the story. It’s kind of a coming-of-age story with a big twist.

JS: Given the sequence of events in the comic, is it possible Zoey Aarons suffers from a mental illness, or at the very least, could use mental illness as a legal defense in the event she is discovered to have committed murder? What made you want to explore her state of mind so intensely?

LT: Not to get all spoilery, but no, she’s not actually mentally ill. The daydreams are just that, and her arguments with her reflection are my way of showing some of that inner turmoil rather than just having warring caption boxes. It’s a more visually interesting way of showing it. She’s also not a sociopath or psychopath. She has a conscience, is capable of feeling emotions and having relationships, and so on. Her compulsions could be considered a type of mental illness, I suppose – I’m OCD myself – but I’m not trying to approach it that way. Regardless of how you decide to define it, she was born that way. It’s who she is. How she handles it is the choice in front of her.

JS: You’ve featured lesbian, gay and bisexual characters in your supporting cast. Their backstories includes one who comes from a well-adjusted home, where sexual orientation was not a factor in their familial relationships, as well as another character whose family life was completely dismantled because of it. What prompted you to include these themes in your storyline?

LT: I’ve had gay friends throughout my life. In high school, one of my best friends was the school’s only openly gay student, and this was in the 1990’s, when having a gay kid on My So Called Life was edgy. He got a ton of flack. His mother took him to a priest for an exorcism. In college, and over the years since, I’ve had other gay, lesbian, bi, and even trans friends. I’ve had friends who were Black, Hispanic, Asian, and so on. It’s the world I live in, and I try to write what I see and know. It’s not an attempt to be inclusive; it’s just me writing the kinds of characters I’m familiar with. Being disabled, I’ve never fit in with nice, normal white America. I’ve always fit in better with the goths, punks, minorities, gays, etc. They’ve always been more accepting and don’t patronize me.

JS: You decided to school your readers by literally putting them inside a college classroom, discussing the foundations of critical thinking and ethics among other philosophical principles. There are readers who complain when comic books get to ‘heady,’ favoring action over theory. Did you think you might be alienating certain audiences by including these dialogs? Or were you hoping to draw in readers that prefer higher level thinking?

LT: The book isn’t very heavy on action to begin with. For a horror book, it’s pretty cerebral, focusing on character and psychology over action and violence. I’ve always described it as psychological noir. Having her in class is part function, part style. She’s a college student, so we have to see her in class or it just becomes a backdrop. But I chose to focus on one class in particular because I can use it to set up and explore ideas that will become central to the story. I can get a bit meta with it. There are all kinds of story possibilities that come with that class, just like there are with her radio show. I plan on showing at least little flashes of other classes, just to keep it grounded, but the more expansive classroom scenes will be in her critical thinking class. 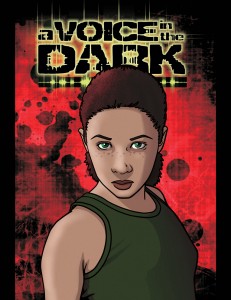 JS: Cultural dynamics of race and gender are always a factor in positive or negative reviews of work that reflect such disenfranchised groups. It was quite a risk having a teenage girl who is half black confess to murder on page one of A Voice in the Dark. Is there a long-term goal in mind regarding these dynamics?

LT: I probably didn’t realize it at the time, but it was a risk, yes. I approached it from the reversal of tropes as I mentioned earlier, so I really wasn’t thinking about her being black and killing someone. Maybe it works because I just treated it like any other character, because I wasn’t so self-conscious about it in my blissful naivete. I’m much more aware of the dynamics now, but I’m trying not to let that keep me from exploring things that I want to explore. Zoey’s blackness is different than many black Americans, because her father was born and raised in Africa. He doesn’t have that American black experience, and so he never passed that on to Zoey. I do plan on having a part of her search for identity deal with what being black means to her, and have discussed that with black and biracial friends. I want to treat it with respect.

Long-term, I don’t know where it’s all going. I’ve only planned about 13 issues ahead so far, and don’t have a set ending in mind. I don’t know if Zoey lives or dies, I don’t know if she wins or loses, or even what winning and losing might look like for her. I’m trying to let this go where it wants to go, and have it grow organically. I don’t even know if it’ll sell five copies and last more than a few issues. It could easily bomb. I don’t want to plan out this huge, epic story and only have it last six months because of sales. Once I know there’s an audience, and how big of an audience, I can try to write it with a better idea of how much time I have to play around.

JS: I want to thank you for taking the time to interview with me here at Comicosity. I’m looking forward to the next issue of A Voice in the Dark!