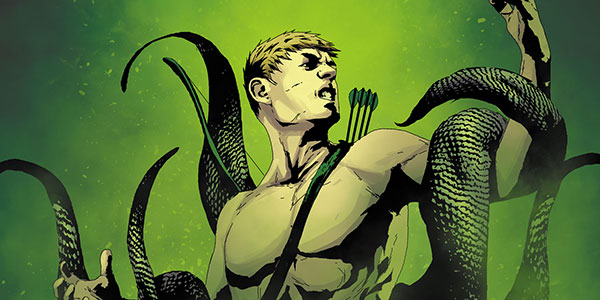 Upon the start of DC Comics’ New 52, very few heroes were as drastically changed as one Oliver Queen. De-aged and removed from a lot of what made him special over the years, Green Arrow seemed to have lost his way in the DC Universe — that is, until the superstar team of Jeff Lemire and Andrea Sorrentino took over with issue #17. Having wrapped up his first story arc two weeks ago with Green Arrow #21, Jeff Lemire took time out of his busy schedule to answer a few quick questions about where his vision for Ollie and the mysterious Outsiders is coming from and a little bit — just a little — about where it’s going!

Matt Santori: Jeff, grand kudos on the new direction for Green Arrow! Now five issues in, we’re starting to see the edge of your grand design. Why do you think it was important to insert a new mythology behind the character?

Jeff Lemire: Well, the New 52 provided a clean slate to really take what we love about these characters and also build something new around them. So I embraced that with Ollie. I wanted to give him a sense of legacy and destiny. I also wanted to build a new supporting cast of both friends and villains.

MSG: The island has obviously been a huge focus of the Arrow television series, but its meaning to Oliver veers off into entirely new territory at the end of your first arc. How much influence from or deliberate ignorance of the other versions of Green Arrow out now is going into your decision-making?

JL: It’s not so much about ignoring or dismissing other versions as it is about staying true to the vision I had for this character. I want my take on Ollie to be unique and being beholden to the TV show, as much as I like it, would only limit the stories I can tell. If I’m doing my job right, my version takes everything that people enjoy about past versions and the TV version and distills into one great story.

MSG: With the return of John Butcher in issue #21, we’re getting to see an element from the classic Mike Grell series come back to the page after years and years in obscurity. Have you been looking to that run for queues or inspiration, and what do you connect with specifically in that set of stories? 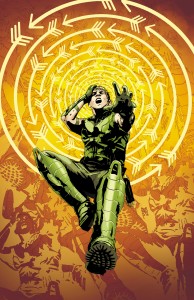 JL: I have been. Mike Grell’s run is, to me, the definitive version of Green Arrow. It was also the closest to the version I wanted to do. His version was the most grounded and had the richest supporting cast, so I’d be foolish not to take advantage of that. I want to add new characters and ideas to the Green Arrow mythology, but also reintroduce what was great about him to a new generation of readers.

MSG: The legend of the Outsiders described in issue #21 was quite the revelation, tying Oliver’s family to that of other heroes (and possibly villains) like Katana and the Butcher. Can we expect other “Outsiders” to appear soon? Side note: I’d LOVE to see Black Lightning intertwine in Ollie’s newfound mysterious history.

JL: Black Lightning will not be a part of the Outsiders mythology, but new Outsiders and more revelations about their scope and history will be coming soon!

MSG:  Seeing Andrea Sorrentino’s pages come in each month must be as thrilling to you as it is for the reader! How has your working relationship been gearing up on the series?

JL: I can’t say enough good things about Andrea. His truly is the voice of this series now. He just brings so many ideas and so much energy to the work. In short, he’s really making me looks good and I have no interest in working on Green Arrow without him. This is our run, not mine. 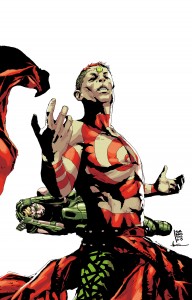 MSG: Flashing forward to September’s Villains Month, we see Count Vertigo being introduced for the first time in the New 52. What can you tell us about how that character will be treated differently for Ollie’s brave new world?

JL: Well, he is the first super powered character we will see in this run, but I tried to execute the more fantastic elements in a way that fits the darker more grounded pulp/crime/noir approach we’ve established. He is certainly the creepiest villain I’ve ever written and Andrea is going nuts visualizing his power.