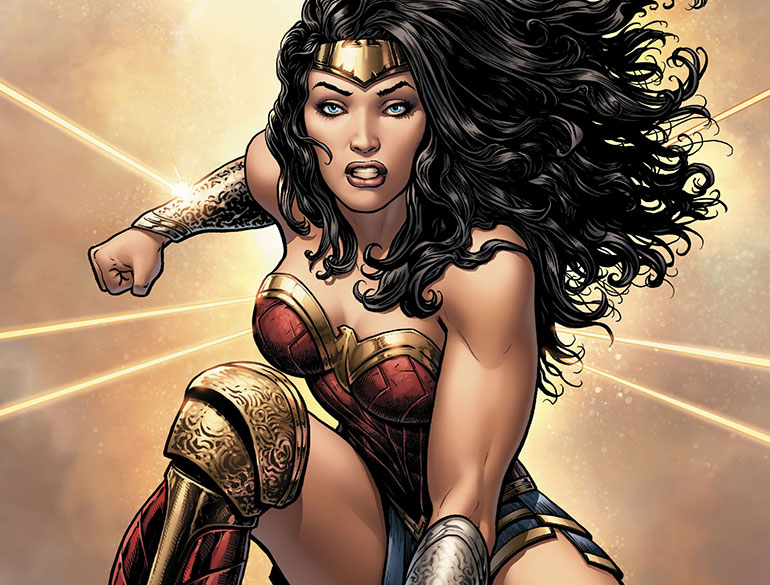 It’s been a long road, but Diana is finally reaching “The Truth” about her relationship to the gods, her return to Paradise Island, and her future in Wonder Woman #23. And there every step of the way has been master artist Liam Sharp. Comicosity sat down with Sharp at this year’s C2E2 in Chicago to reflect on the year’s run, how his understanding of the Amazon Princess has evolved, and how characters like the Cheetah and Ares developed in his mind to what we’ve seen on the final page. 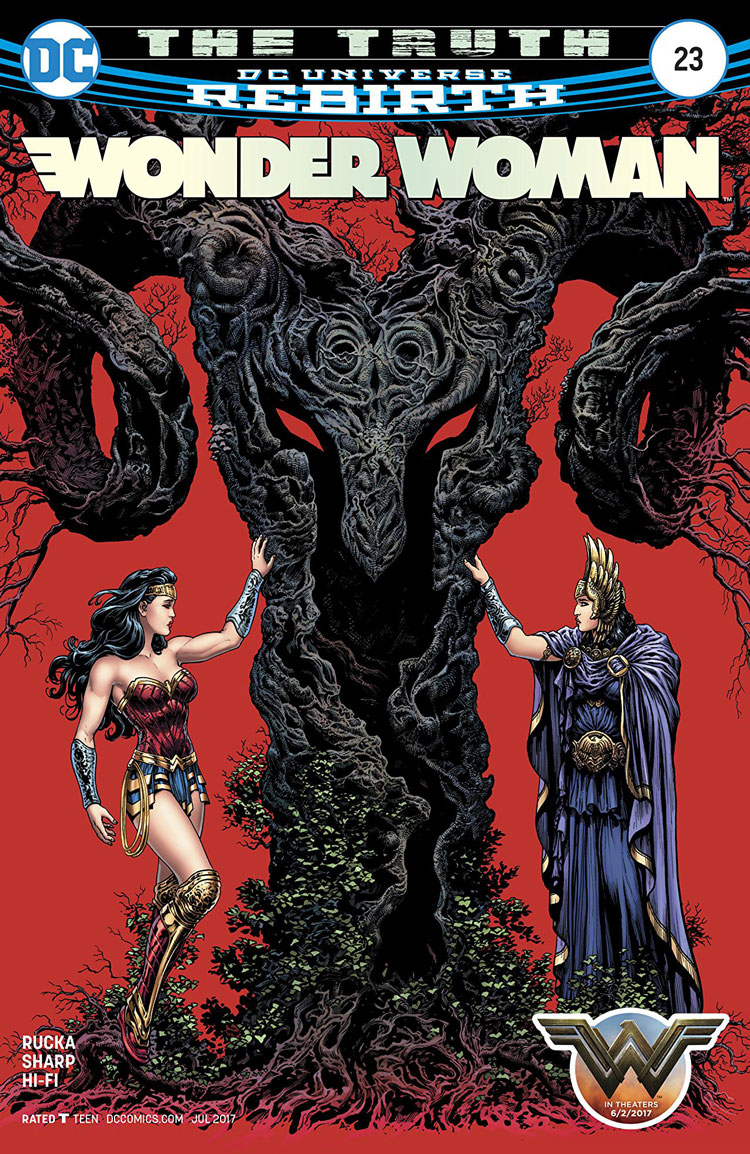 Matt Santori: We talked right before issue #1 hit stores. Now we’re almost to the end of a full year of issues. How has the way you draw Diana and your thought process about her changed?

Liam Sharp: Oh, it’s totally evolved. Initially it was all about what she looked like. I had grabbed the Brian Azzarello/Cliff Chiang run and really loved it, but I knew it was going to be a shift in direction. A lot of the other versions were quite angry, like the Frank Miller and Jim Lee ones.

So the first drawings I did of her were kind of like a warrior/Valkyrie type of character. But when Greg [Rucka] came on, he wanted to reset it. That’s really not Diana, and certainly not for him.

I got it immediately and that shifted my whole thinking about her. Of course! She’s about sweetness and about empathy. She’s about looking at the whole situation, assessing it and coming up with a solution — not just wading in and being a warrior.

And of course, if you start with a smile, you have so much room to grow. You have a start that you can take a journey on with the character. So, when she gets angry, it’s going to be a surprise. “Heh. We’ve really pissed her off now, right?”

I guess I started to know her during the process of working on the book. And fall in love with her. It happens really quickly. Now, she’s just part of the family. I can’t imagine life without her now, which is really odd. She’ll always loom large in my life. 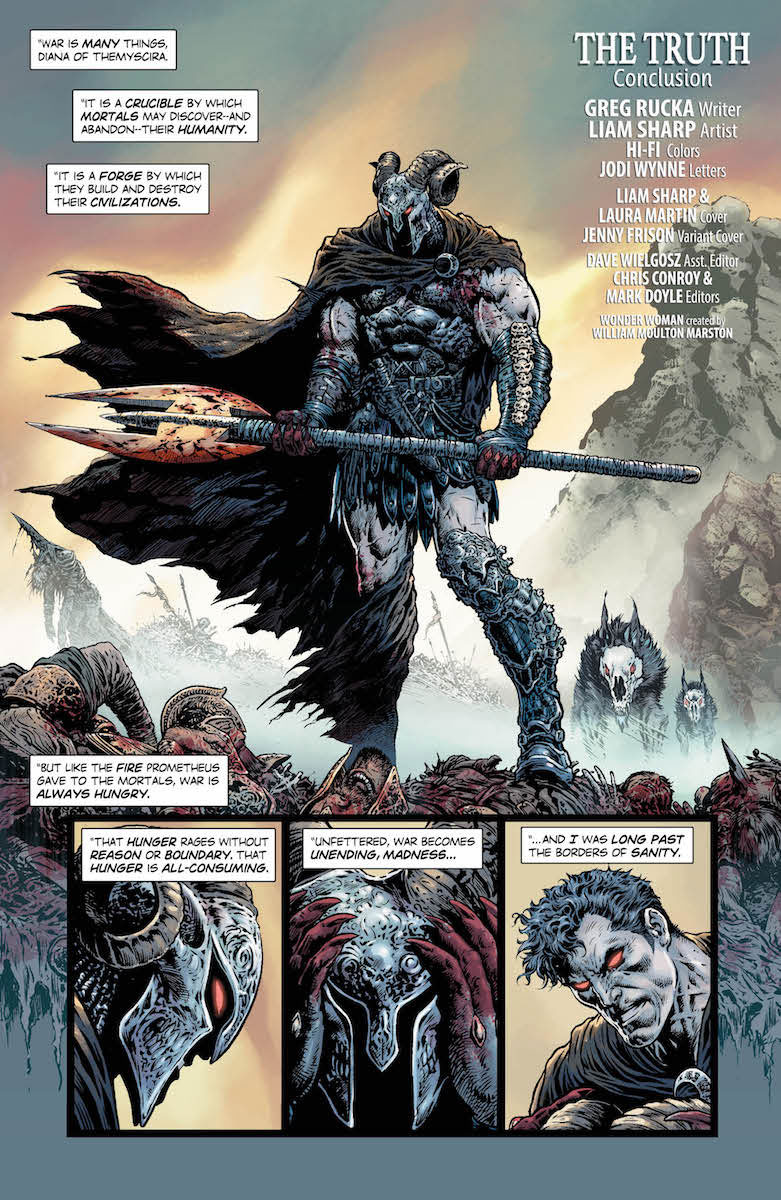 MS: You completely revolutionized the look of Barbara Ann Minerva, the Cheetah. We got to see bits and pieces with Nicola [Scott] and Bilquis [Evely], but her character has been a major part of your storyline. What was your thinking going into that?

LS: We went through a few stages in the editorial process and I was working with [editor] Jim Chadwick at the time. Jim had a lot to do with that. I can’t take all the credit for it. He didn’t want her to look either too much like a full-on furry or how she had looked.

I got there pretty quickly. I did three or four designs, and in the first one, she pretty much looked like a human with a cheetah head. Jim suggested making her a weird hybrid between a human and a cheetah, something a little more eerie and a little more uncomfortable.

I got rid of the long hair because, to me, it didn’t seem appropriate for a creature that’s all about speed, you know? How does that even work? It also kind of looked like something that should have been left behind in the eighties. She was a little bit hair metal. It slightly made her look like a model that had been body-painted, rather than something truly terrifying.

She’s a cat. And cats have a lot of facets to them. I wanted to be able to do this thing where she could be cute and almost playful, like you could go and scratch her behind the ears. The next minute she’d be pouncing and taking down an animal of some sort, like an elk. Something really fast. 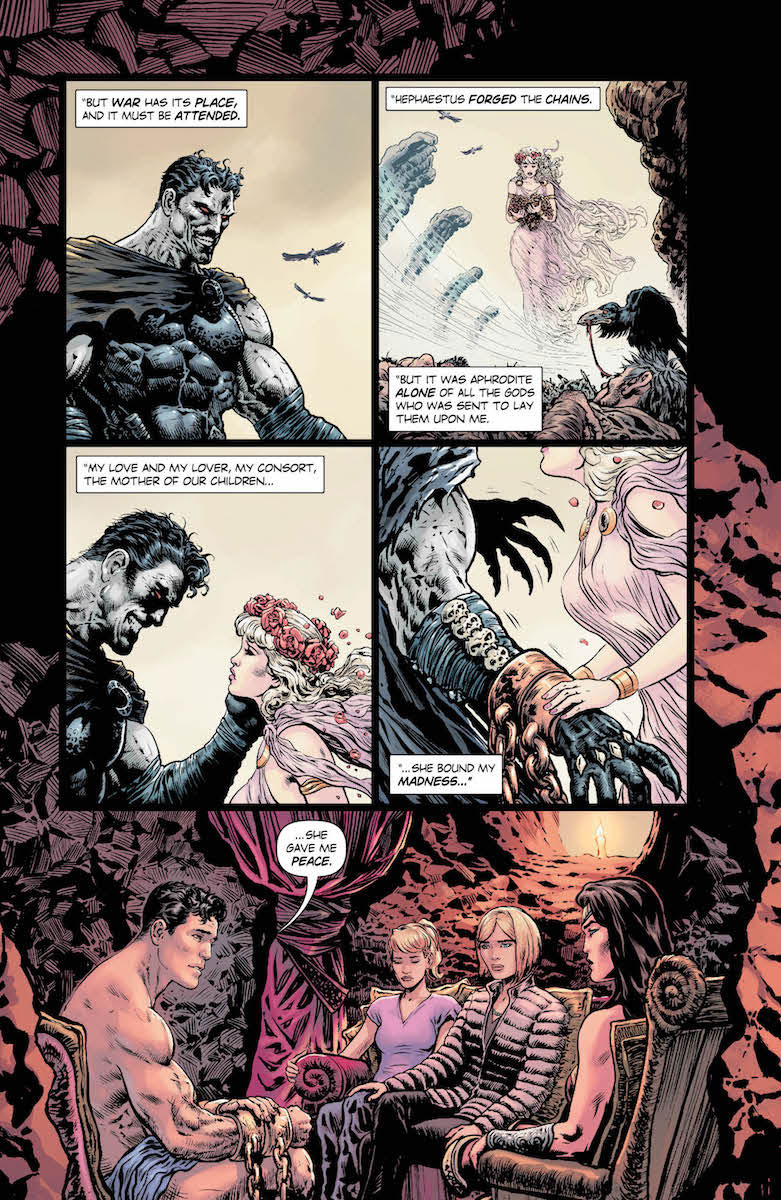 MS: To me, it’s not just about Ann being sweet or angry, but there’s a certain sadness you’ve infused in her look from the get-go.

LS: The thing there seems so obvious. When I looked at cheetahs, and was researching the actual cat, they have these black tears on their faces. And I couldn’t understand why no one had ever put those markings on her before.

It’s very symbolic of the character, as soon as you put them on. Even just the term “black tears” says a lot about the character. It instantly makes her look more cat-like, but also this kind of empathy and sadness, as you say.

Yeah, we all sort of fell in love with her as well.

MS: We’re coming up on the conclusion of the story with your last issue (#23) this week, and you’re finally getting to draw Ares. Early on, I know this was something you were looking forward to down the line.

LS: It’s not going to be what people expect. It actually comes from conversation that Greg and I had really early on. We did go back to some really early sources for the reveal. He’s a very different take. That’s not to say I don’t get to draw the full-on version that people are expecting, but the rest will be a real surprise.

It’s key to the story, though. He is the lynchpin in it all. 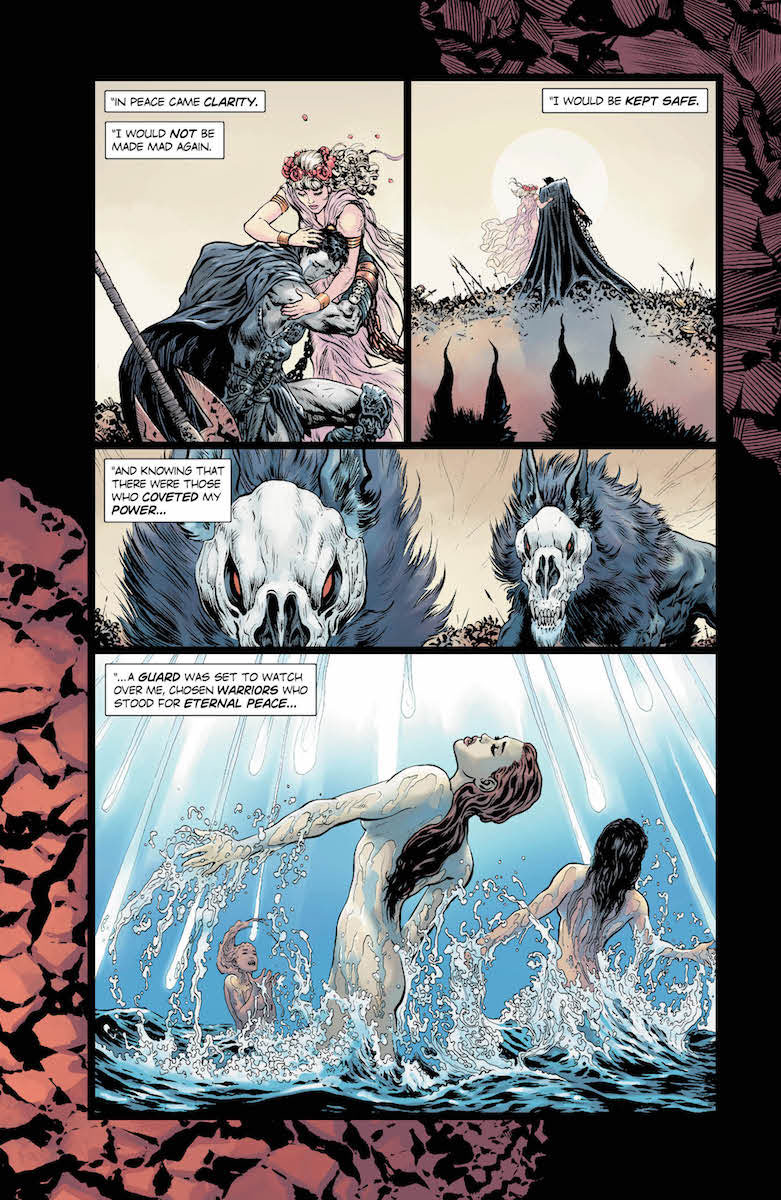 MS: The bigger picture for the entire run has been about rebuilding both Diana and her supporting cast and villains. Is there anyone else that stands out to you in your process?

LS: The whole cast has been really interesting. I love Doctor Cyber and that sort of playful nature she has. They’ve all had an arc, you know. Cyber may be the cybernetic entity that runs everything, but Cale is her close friend. Maybe a little bit dismissive of her. But then you learn how she became Doctor Cyber and that was heartbreaking.

And then you get to see her furious, demented, and terrifying. That was fun! Even with that, I did one or two earlier versions, and there are hints of her old costume in that design, for the real long-term fans of this stuff who like to connect the dots.

Cale has been really interesting and is a particular favorite of Greg’s. And she has a hell of an arc. What Greg does really well is take characters that maybe we should hate, and give them such rich back-stories. You have to feel sorry for them. I mean, Cheetah is particularly heartbreaking, but if we’ve done it right, Cale will also be a heartbreaking story.

I’m trying to think if any of them are just out-and-out badass. Poison (Maru) is just a merc, so she’s pretty black and white, to some degree, but she’s a badass. I wanted to put some old school super-hero type cowls on her team because the book hasn’t felt at all to me like a mainstream super-hero comic. It’s been quite a unique book with it’s own universe. It’s almost felt like the entire series was just one special project.

The whole world is very rich, and that was something we were keen to do: make it feel like an inhabited space. With crazy detail. 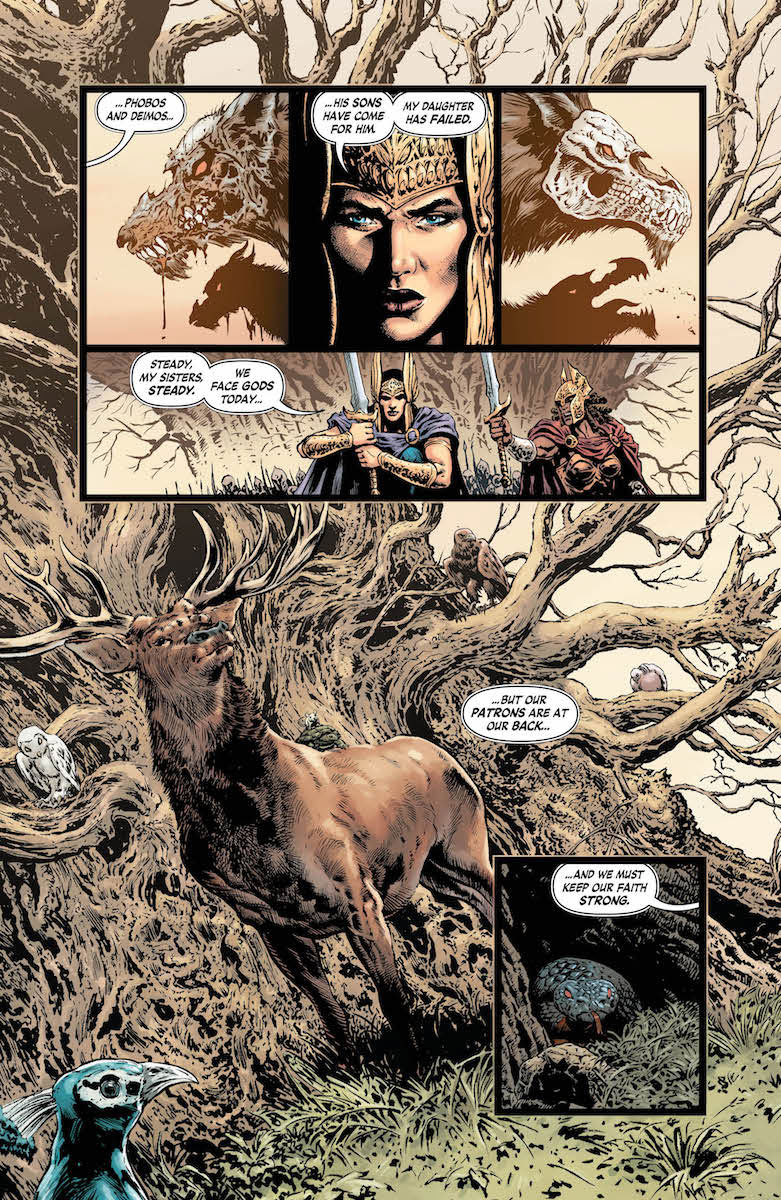 MS: Any tease or special thoughts about Wednesday’s issue #23?

LS: Well, the cover kicks ass. [laughs] And it’s my last issue, so it wraps up “The Truth.” It’s the best issue of my entire run, and I’ve pulled out all the stops. I did the art super-sized, so the detail is ridiculous.

We get to see tons and tons of the threads come together. Knots are tied. You’re going to really love what happens with the twins — the sons of Ares. They’re pretty bestial and horrible. Man. Those guys. They’re not nice.

RUN to your comic shop this Wednesday and grab the finale for “The Truth” by Liam Sharp, in Wonder Woman #23 from DC Comics.