The Next Testament is coming to BOOM! Studios. Clive Barker’s Next Testament, that is! Clive Barker will be co-writing the new series with Mark Miller and it will feature Haemi Jang on art. Miller was kind enough to take time to discuss what readers can expect from Next Testament.

Aaron Long: Best to start at the beginning…how did Next Testament come to be? Had you and Clive been developing this series for awhile before bringing it to BOOM! Studios? 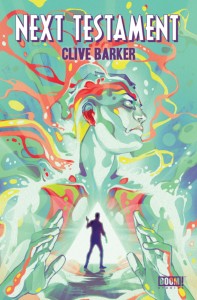 Mark Miller: Next Testament is something that’s been very close to us for quite a few years now. At Seraphim, we’re always focusing on the big projects obviously. At the moment, Clive is writing Abarat IV and that takes up 90% of his working day. But there are always projects and ideas that exist on our periphery and it’s simply a matter of finding the right time and the right place for them.

I just finished my arcs with Hellraiser when I had a conversation with BOOM! about what Clive’s next project with them might be. And only a few days before that, I’d gone through the mental checklist of my favorite unused ideas and Next Testament came to mind. When I spoke with Boom! the proverbial light went on in my head and I pitched it to them. They greenlit the idea right then and there.

MM: I can promise you that we will discuss every theme we want to discuss, which includes but is not limited to Love, God, Faith, Lust, Evil, Sin, Racism, Ignorance, and just plain old Life itself. The world of Next Testament is, to put it plainly, our world; the world we all currently inhabit. The Old and New Testaments are about extraordinary and harrowing things happening to our world during the chronicled eras. Next Testament is precisely the same thing. Imagine if today you knew beyond a shadow of a doubt that God was alive because He had made His presence known. Now…what that means for humanity at large is where our story begins. 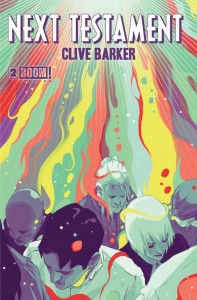 AL: The series focuses on Julian Demond, a captain of industry. Who is Julian and what is his role in the series?

MM: Julian is a very wealthy man who has grown bored with his life and wants to take it to the next level. He believe the world is his inheritance. And so he sets about on a quest for God. And where most stories might end, is where ours begins. Julian finds God and discovers that he’s made a rather critical error. He doesn’t find Christ. He finds the God of Old. You know, the one who melted cities to the ground and flooded the planet on a whim? Yeah, that God.
And our story follows Julian, who is finds himself in the passenger seat for the ride of a lifetime.

AL: The series unites you with artist Haemi Jang. How has her style influenced Next Testament?

MM: In a word: Positively. Haemi’s style has enhanced even my ability to write the scripts. Just knowing that our vision is in her capable hands has allowed me to write with a greater ease. I think everyone can tell when a writer is writing through gritted teeth or clinched butt cheeks, or what have you. But knowing that I’ll be handing whatever is written to an amazing talent like Haemi frees me up to have a lot more fun with the process as a whole. And I feel, thus far, that it has translated to the page.

AL: Any final thoughts or teasers regarding Next Testament for Comicosity’s readers?

MM: Hold on to your butts.