Today, August 1st, Hawkeye #1 hits shelves from the fan-favourite creative team of Matt Fraction and David Aja. Well known for their work on Immortal Iron Fist, the creative team is taking on Clint Barton this time, a character at his media peak from the success of the Avengers film this summer. Fraction took time from his schedule to discuss how the series came to be, who Clint Barton is, and what readers can expect going forward. 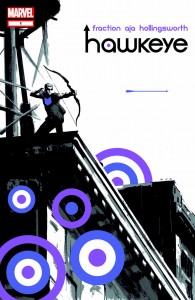 Aaron Long: It has been awhile since there has been an ongoing solo Hawkeye book. Can you discuss how this series came to be and how you got involved?

Matt Fraction: I was asked, basically; Wacker took a flier and at first I said no, but then I thought about it, found an idea, pitched it, then realized the idea was wrong and backed away from it, then thought about it some more, then figured it out, pitched it again (after saying no, really, really, I mean it this time, really I do) and then I got it. Um… basically. My first take was something glamorous and exotic, a sort of Bond thing, but it just wasn’t the right idea for Clint Barton. This one is much more Jim Rockford than James Bond. Or Jim meets James anyway.

AL: Clint Barton has been interpreted many ways over the years, from criminal to Avenger and even Ronin for awhile. Who is Clint Barton to you? What traits drew you to this character?

MF: That he’s Just A Guy, and an extraordinarily decent one at that. I thought to use The Normal Guy as the lens through which to view the marvel universe wasn’t anything I’d done before, and was something I’d really want to read. He’s street smart, funny, he’ll break rules, fall into the wrong beds, and absolutely positively won’t stop until he’s done the right thing. And, too, I knew he was Aja’s favorite. 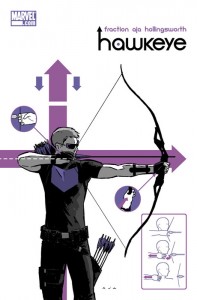 AL: Kate Bishop, the Hawkeye of the Young Avengers, will be appearing in this series. Can you discuss the relationship between these two characters? Is Clint looking to mentor Kate?

MF: It’s very Avengers — Steed and Peel — rather than anything romantic, sexual, or anything else. Not quite Mentor-mentee but not quite peers, either. I loved writing Kate, and Clint and Kate, in the YOUNG AVENGERS special I did all those years ago. I wanted to get back to that, to get to the one woman in Clint’s life he WOULDN’T entertain thoughts about sleeping with, to give him a partner the way Mockingbird used to be.

AL: There has been a huge fan reaction to the news that you’ll be working with David Aja again on Hawkeye. When you’re working with an artist such as David, with whom you’ve had great success in the past, does your writing process change to fit the artist? Does a script for Larroca look and feel like a script for Aja?

MF: Yeah. I’m writing this… kind of Marvel Style, but not really. I’m writing it Aja style. I do a “marvel plot”, meaning I go page by page, talking about what happens on each in broad strokes. Sometimes in fine strokes but mostly it’s broad. David does thumbnails, changing stuff, refining pacing, blowing moments up, slowing moments down, excising, adding — David is David, in other words. Then from his thumbs I do a close-to-done lettering draft. He lays in lettering guides, refines his thumbs into pages, and then I polish until the book leaves house and Sana and Chris hate me.

And no, a Salva script is nothing like a David script. A David is nothing like an Alan Davis script, or a McKelvie, or Dodson. Every artist is different; every script I try my best to tailor to them.

AL: Any final words for Comicosity’s readers regarding Hawkeye?