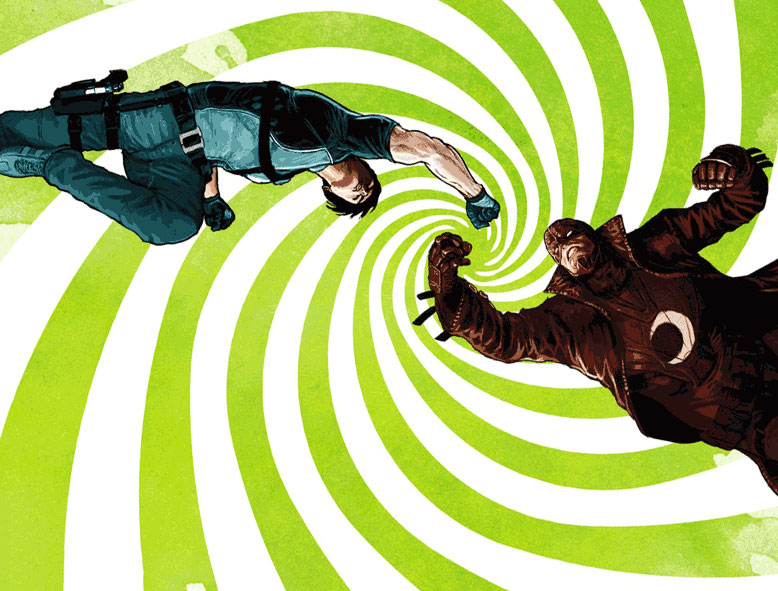 One of Comicosity’s Best Artists of 2013, Mikel Janin has proven time and time again he can roll out gorgeous looking characters. So, it should have come as no surprise that the artist was pegged to take perennial hottie Dick Grayson to the next level in his new monthly series in 2014.

Today, we talk to Janin about what it’s like to work on one of comicdom’s most recognizable sex symbols, how his experience has been on the status quo change, and what it takes to orchestrate an awesome fight scene. 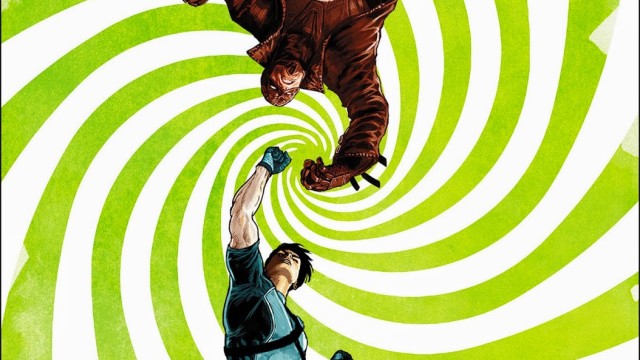 Matt Santori: Thanks so much for taking time out for Comicosity, Mikel!

Mikel Janin: Thank you for having me! I’m glad to be on Comicosity!

MSG: Looking back now, Grayson was a bellwether for a lot of changes to the Batman line as a whole. What were your expectations going in regarding Dick’s new status quo and has your perspective changed at all since?

MJ: The truth is when I was attached to the project, I had a very different idea of what I was going to do. Former editor Mike Marts asked me to join Nightwing and, after more than two years in Justice League Dark, I was thrilled to be part of such an important and loved character.

But when things started to roll, I realized this was a totally new direction for Dick Grayson. There were a lot of changes, with editor Mark Doyle taking the project, and everything went full speed very quickly! I’m so happy things turned this way. Grayson is a blast!

MSG: Eight months in, you have Agent 37 and the Matron working together like a well-oiled machine. How has their relationship developed for you in putting their interactions on the page?

MJ: I think one of the best parts working on Grayson is having this fresh start where everything is new, for Dick, for readers, and for me too. This means I’m getting to know Helena at the same pace Dick does, and this translates to the pages. At the beginning she looks cool and bad-ass, but once we start to know her more, we see she has more inside. And we learn to love her, just like Dick does. 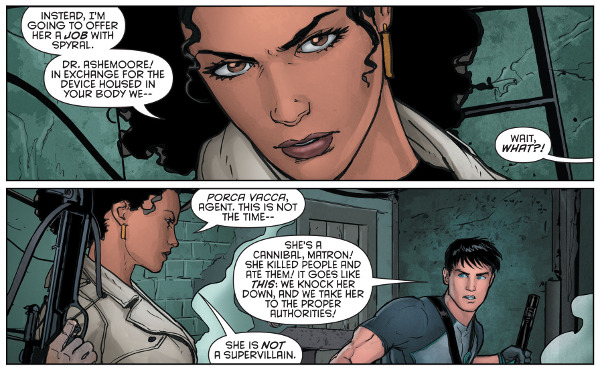 MSG: In Grayson #6, Dick actually makes a distinction between his moves as Robin and those he used as Nightwing. What was the thought process behind that difference?

MJ: Tim Seeley gave me some references of actual Robin fight scenes in the Golden Age, and I tried to bring the energy and the happiness of this young boy we all know and love to Dick’s moves, less elaborated than Nightwing’s graceful moves, just direct action to the face. It was really fun to do!

MSG: Having Midnighter as a foil for one of the sons of the Batman is pretty curious. How have you been thinking about his particular muscle movement and behavior that distinguishes him from Bruce and Dick?

MJ: I try not to think of him like a version of Batman, but more like a real world fighter. I try to make him look really dangerous, when he punches Dick’s face I want the reader to think: “wow, that is hard!”

MSG: Many female and gay fans (myself included) particularly loved Midnighter being able to identify Dick by the shape of his ass. What are your thoughts on Dick as a sex symbol to these “non-traditional” demographics, and how does it factor into your drawing?

MJ: It’s part of the character’s fun. He must be irresistible to everyone, and I try to make him as charming and sexy as I can. When I hear back from girls or gays about how hot he is, I feel like I’ve done my job! 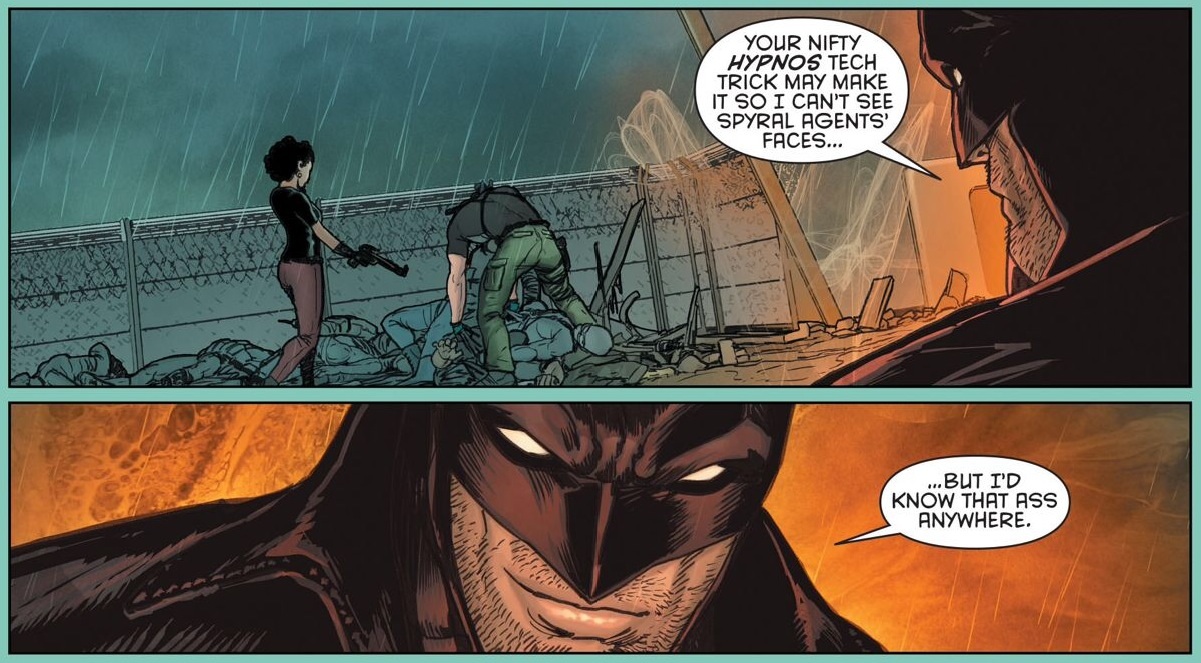 MSG: How has the working relationship been with writers Tom King and Tim Seeley? What does each one bring to you with each issue that’s different?

MJ: This is the best part. Along with colorist Jeromy Cox and editors Mark Doyle and Matt Humphries, I feel like we are all a very solid team. We all enjoy a lot every stage of the process, and we are all proud and happy with this book. And I honestly think it shows in the pages. There’s joy and fun with every issue! 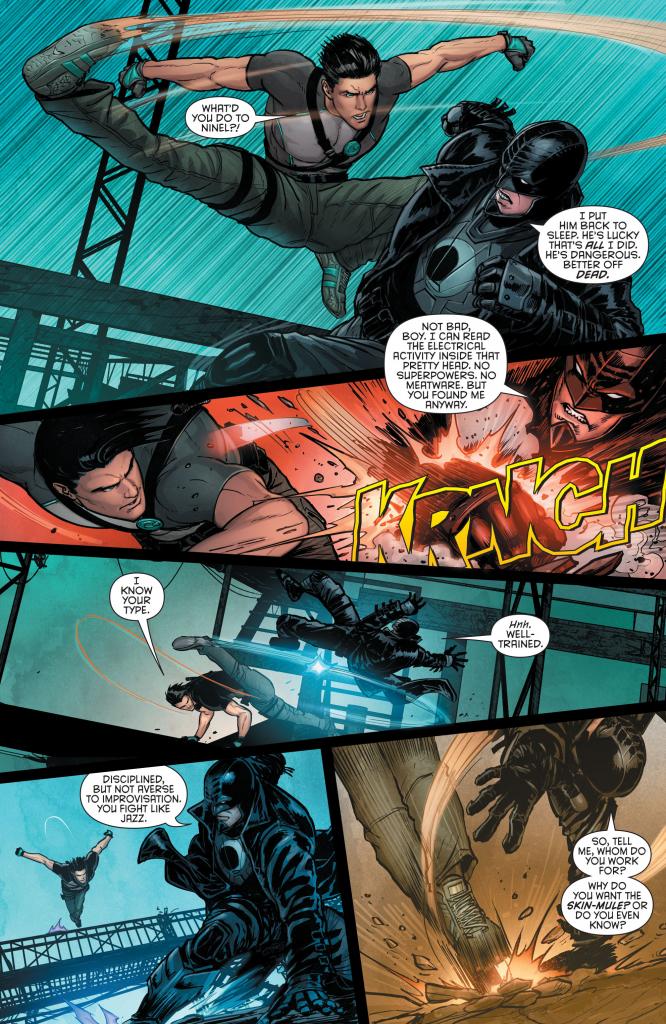 Tom and Tim are very different writers, I don’t need to see the name on the script to know who’s writing each issue, but they’re so good! I’m really glad they both are sharing writing duties and going from one style to another. I think this really adds depth to the characters and plots.

Tim brings some crazy ideas and sense of wonder, going to places you only can go in comic-books. He has an incredible ability to bring rhythm and fun to the book. Tom digs deep to character’s heart, and has a sense of pace that makes you feel like you’re into a movie.

MSG: Any final thoughts or special teases for the Comicosity audience on upcoming issues of Grayson?

MJ: Just I hope readers stay with us so we can keep doing this book. The best things are still to come!

Many thanks to Comicosity for your continued support!​