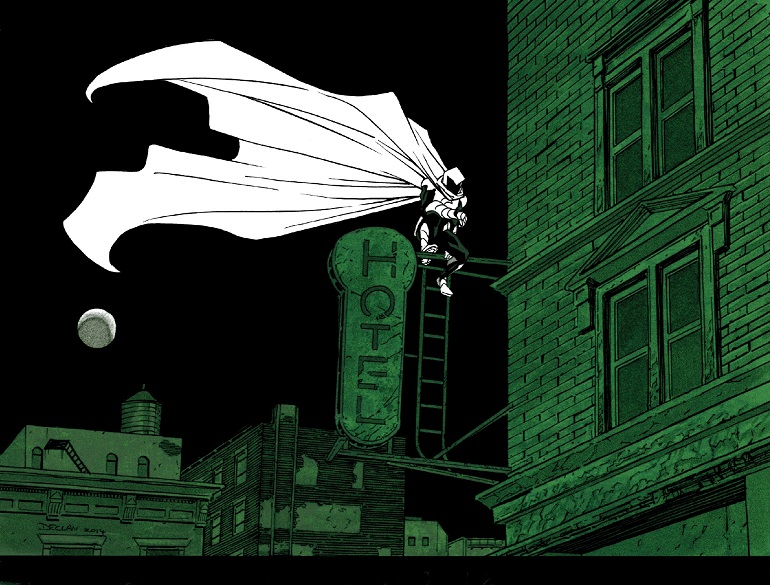 A year ago, Marvel’s new Moon Knight burst onto the scene to critical acclaim and it’s now down to writer Cullen Bunn and artist Ron Ackins to carry on the torch. Their new run on the character begins tomorrow and Comicosity got a chance to sit down with Cullen Bunn and chat before everyone digs into their debut.

We got started with a few questions about the self-contained story:

J.A. Micheline: I’m not typically a fan of episodic stories but Moon Knight somehow hit that sweet spot for me. What do you think the appeal is when it comes to the self-contained story, and especially considering how self-contained the stories of Moon Knight have been thus far? American comics have made their name in grand, overarching narratives so this method definitely represents something relatively different to what’s happening on most other major books.

Cullen Bunn: I like big, multi-issue stories as much as the next person, but sometimes I just want to read a comic from cover to cover and enjoy one tale from beginning to end. It’s definitely a novelty now, and done-in-one stories aren’t easy to write. Back when they were really in fashion, comics had more pages and there were typically more panels on those pages. I think readers can appreciate the challenge a writer faces in penning one of these stories. I think stand-alone comics are nice for readers because they usually don’t require a lot of backstory or knowledge of continuity. And I think the pacing of such stories usually provides readers with an added sense of excitement.

JAM: Speaking of self-contained, what are the challenges associated with the knowledge that you’re only on this book for a short run? What are the freedoms?

CB: Knowing that I’m only writing five issues of the book, I was able to put aside a lot of my usual planning. Many times when I take on a new project, I map out dozens of issues and bigger stories. When it comes to Moon Knight, though, I didn’t need to worry with that. All I needed to do was plan out five individual stories that I wanted to tell. As I mentioned, there are challenges with writing self-contained stories, but it really made Moon Knight a refreshing change of pace for me.

JAM: For each of these two runs, I think we’ve had single issues that really stand out as hallmarks of the writer in question. I’d consider the hallucinogenic sleep mushroom issue, the “Ellis issue” of that run. Similarly, I think of the recent issue with Spector trapped in a detention center as the “Wood issue” of the second set. Is there a “Bunn issue” for your run? If so, what can we expect from it?

CB: That’s a tough one. I think each of the issues in my run on the book are quite different. Each has its own tone and themes and weirdness. Right now, I’d say issue 15, the third in my arc, is my favorite.

JAM: You were into Moon Knight from the very beginning with Doug Moensch’s Werewolf by Night. But Moon Knight is also a great example of a character with a very convoluted history and there have been five different attempts at giving him a solo book across the years. We’ve heard what spoke to you about the character at his first appearance — what about this new version speaks to you now? What about it do you think is speaking to readers?

CB: Moon Knight today has the edgy street level appeal mixed with surreal religious overtones that might represent some sort of deific influence… or might just mean Moon Knight is absolutely mad. That question is something I believe appeals to readers. We’ve heard of unreliable narrators in fiction, but Moon Knight’s entire experience is unreliable, because it may just be his twisted imagination. I think readers enjoy looking for clues that might answer the question of is he or isn’t he mad. I have my own answers to that, and I sprinkle in clues throughout my five issues.

JAM: You’ve said that your five issues will be about the “street-level supernatural” and “100% weird.” Marc Spector definitely carved out that niche in the Marvel Universe with a lot of Warren Ellis’ run and you yourself mentioned that you’ll be pulling some elements of that arc into your own take. What can we anticipate will be new and different about your version of Mr. Knight?

CB: My stories stray into more supernatural territory than Mr. Ellis’s run. While these are stand-alone stories, there is a thread that connects the threats Moon Knight will be facing. Faith plays a huge role in my issues. Moon Knight’s faith in Khonshu, Khonshu’s faith in his priest, and the faith of other individuals Moon Knight encounters.

JAM: In a way, working on this book is kind of a destiny fulfilled, considering this was one of the first things you wanted to pitch to Marvel. How has that original pitch evolved and what’s it like to finally unleash it on the world almost 10 years later?

CB: It’s probably a good thing that the Moon Knight pitch I had in mind didn’t happen back then. I’ve had the chance to mature a bit as a writer, and while I have fond memories of my pitch for The Macabre Moon Knight, I’m not sure I would have been able to look back on that series proudly. I admit that this run on Moon Knight is informed a bit by what I might have wanted to do almost a decade ago, but I’m handling it in a way that’s a little sharper and darker than I had in mind way back when.

JAM: One of the cool things about these short runs and these contained stories is that, in a certain way, the start of each run can be viewed as a #1. If you were pitching your run as a #1 to a totally fresh reader, how would you do it?

CB: Marc Spector is a mercenary who has been chosen to act as the high priest of an Egyptian god. His chief responsibility as this god’s priest is protecting “those who travel by night.” As he sets out to defend his flock from all types of bizarre and horrific threats, he is becoming aware that he may not be interpreting his deity’s desires as clearly as he thought. He might be protecting the wrong people all along, committing blasphemies while he believes he is spreading the gospel.