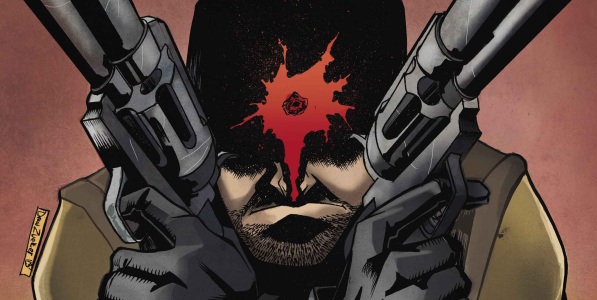 Get ready to head to a gritty, violent Wild West, friends. Monkeybrain Comics will publish the first issue of Michael Moreci and Drew Zucker’s Skybreaker tomorrow (March 27, 2013), a dark western set in a violent time in America’s history. The creative team was kind enough to sit down and give us the scoop on Skybreaker. 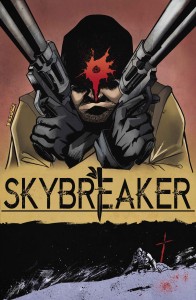 Aaron Long: A brand new series means questions about its origins: how did Skybreaker come to be? Have you been working on this for awhile? How did the title end up at Monkeybrain Comics?

Michael Moreci: There’s this weird stretch, right before Hoax Hunters came out in Hack/Slash, where I was a writing maniac. I still do write, obviously, a lot. But now I write, mainly, to hit deadlines and satisfy obligations. Then, there was no one over my shoulder. I was developing and writing scripts for reason other than to do it. There were three series I developed over a couple month stretch, and Skybreaker was one of them.

I’ve always been a big fan of Westerns. My dad, who is a great guy in general, planted the seeds for understanding the genre. He was a John Wayne fan, so I grew up watching a lot of those films. Then it was Clint Eastwood and Sergio Leone and The Wild Bunch, on and on. I’m still discovering great films of the genre; it’s so rich and, I hope, sticks with us for a very long time. Something about it speaks to the American experience of rugged individualism and violence and exploration.

As for how it came to Monkeybrain, I was lucky enough to show a few pages I’d been working on with artist Drew Zucker, and he liked what he saw. Chris is an amazing person—one of the best in comics—and I’m very fortunate to be working with Monkeybrain.

AL: For folks who haven’t seen the press regarding the series yet, how would you describe Skybreaker? What does the world of Skybreaker look and feel like? 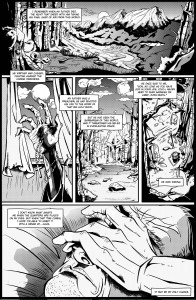 MM: Skybreaker is a book about America and violence that’s dressed as a revenge thriller. I was thinking about this the other day, but Skybreaker has never been more relevant than it is now, with the powder keg of gun violence and gun control upon which we all sit. I didn’t conceptualize the book with that in mind, but I certainly see it in the book now, this cycle of violence that stems back to the very basis of our country.

Skybreaker, to be more specific, centers on a group on people caught up in the tumult of violence. It takes place in Dakota, shortly after the end of the Civil War, which is a fascinating time. America got through a period where went to the brink of killing ourselves outright, and those wounds didn’t heal quickly. So you have a lot of animosity in the air and a struggle to make things whole again. But, it was also a time of opportunity—people were heading west, looking to fulfill the manifest destiny of American freedom through wealth.

Man, I’m seriously digressing. The story is this: Skybreaker is a man of two worlds, he’s half Christian, half Sioux. When he arrives at our Dakota town after serving in the Union army, something happens that leaves him branded a traitor and nearly ends his life. The story is him attempting to take vengeance on the man who tried to kill him—Cutter, the town’s unofficial leader—and regain his honor.

Along the way, we see Cutter’s town begin to unravel as a brutal Union cavalry moves in, claiming it as U.S. territory (a common practice during that time). And while Skybreaker plots his revenge, the town must fight for their claim against a government expanding its reach, rightfully or otherwise.

That’s all I can say without spoiling too much. It’s a somewhat dense book, I admit—there’s a lot going on. But it’s going to be an enjoyable ride, I promise that. 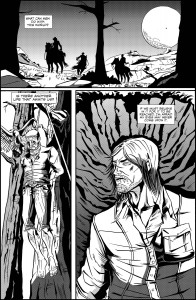 AL: Let’s dig into who Skybreaker is a little bit. Can you tell us about the main character and what he’s after in this series?

MM: Like so many of us, Skybreaker is a man looking for a home. He’s kind of like America after the war, spiritually fractured and seeking a way to a peace that won’t come easily. He’s a man of two worlds, Christian and Sioux, yet belonging to none. As he realizes he’ll never get what he wants, ideally, he seeks out something more simple—to put the violence of the past behind him and somehow move on with his life. But the question is, can he move on without exacting his revenge first? Does going after Cutter, murdering him, give him the closure he seeks? That’s what we’ll find out.

AL: Drew, can you discuss your process a bit for creating the world of Skybreaker? Are there any major influences or inspirations for the look of this series?

Drew Zucker: The process really starts with Michael, his scripts are so fully realized that it set the tone right away, from there I run with his ideas and expand them as much as I can in the character designs and thumbnails. I know for both of us Northlanders was a real touch stone for the tone we wanted. We didn’t want the violence and all the horrible things in the book to be glorified, just a sad reality for the characters. For me personally I’ve pulled a lot from other medias for this, things like Deadwood, 3:10 to Yuma, and The Proposition, were all great sources of inspiration for the book, while trying to throw my own mainstream comic sensibilities into the western mix.

AL: If you had to sum up Skybreaker in six words, what would they be?

DZ: Hmm this is actually a tough one. “A savagely uncompromising, bloodthirsty tale of revenge,” I think describes it best.

Kidding, though I hope readers get the reference… everyone has to, right? Here goes: