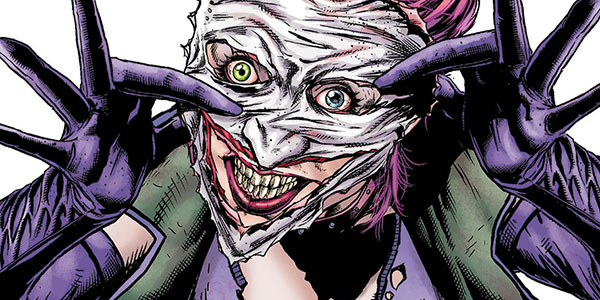 DC fans were head over heels for the return of the Joker last year, but it seems like we haven’t seen the last of his face. He’s just not the one wearing it anymore. As seen in the final page of last month’s Catwoman #23, the Joker’s Daughter has returned to the New 52 and is a decidedly more creepy version than we’ve ever seen before. As writer Ann Nocenti brings this classic character into the 21st century, we ask her what we can expect out of the villain, how she plays off of Ann’s regular femme fatale Selina Kyle, and just what it is about that face that makes everyone want to wear it!

Matt Santori: Ann, thank you for taking the time to speak with us about Villains Month! How did the decision to return the Joker’s Daughter to the DC Universe come about?

Ann Nocenti: My editors at DC sent me two images. The first one was of a skinny girl, just skin & bones and a twisted face. The other was an image of how she would end up, as the Joker’s Daughter, in that great jaunty outfit. I loved her look, right away. The way the artist had her jut out her hip, her sly grin, her sassy attitude, her: “I’m ugly, so what?” vibe—it slammed against everything young girls want today. This girl wasn’t trying to look pretty and sexy. She radiated strength and pride in her non-conventional look.

So I started with this idea that she is defiantly ugly. Purposefully ugly. Proud to be ugly. And then the next question became: “What is ugly?” So I started developing her origin from that question. And of course, the power that Scott Snyder built into “The Face” was a profound place to start from.

MSG: In the Bronze Age at DC, the Joker’s Daughter was a character falling somewhere between bad and good, initially more of a trickster than outright villain. Where does the New 52 iteration fall along those lines and what is it like to explore that tension?

AN: I would say that she is neither outright villain nor trickster, although she has some qualities of both. She’s a bit of a sociopath, in that she lacks empathy and is driven by selfish motives. She’s clear in what she wants. She isn’t subservient to anyone. She’s not babbling crazy. She’s strong, crisply intelligent and highly functional. And yet she has the mood swings of a manic-depressive. She can careen from crippling despair to world-conquering arrogance in a heartbeat. She is, basically, a normal teenager. With a twist. She doesn’t yearn for beauty and marriage, she wants to empower herself, to celebrate exactly who she is. To her, Ugly is the new Beautiful. 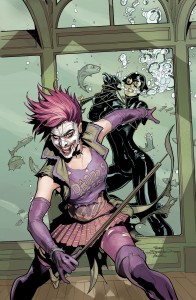 MSG: Of course, this iteration of the Joker’s Daughter has a little something the classic version never did: the Joker’s own face. What can you tell us about her motivation to wear this madman’s skin over her own and what kind of relationship does that create between the two of them?

AN: Without giving any spoilers, I can say that she takes to the face as if it is her rightful fate and destiny. And she has Daddy issues, but not the kind you’d expect. As she says: “There’s nothing worse than a happy childhood.”

MSG: A lot of writers are getting to stretch their limitations this month by focusing on villains for their tales, but you get to write a villain, however conflicted, every month in Catwoman. Is there a different set of expectations or rules going into writing about characters fans love to hate?

AN: New-52 Catwoman is much younger than previously, so this is before she could really be called a villain. Since she’s younger and less experienced, she doesn’t have the confident femme fatale thing quite yet, she’s not a “man-killer,” although she’s getting more experience. She’s beginning to consider ethics when stealing, she prefers stealing from the rich, yet she has no qualms or problems with stealing. She takes enormous pride in the craft of the con, the artistry of thieving. That makes her look like a villain from the outside, but for her, she’s just practicing and exulting in her skill. So Catwoman has, from the outside, aspects of being a villain, or at least an anti-hero, but from her point of view, she’s a highly skilled and proud-of-it thief. 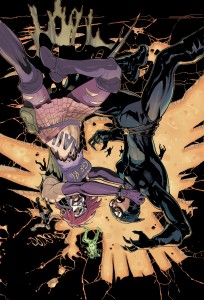 MSG: In your mind, why is the Joker’s Daughter a perfect foil or antagonist for Catwoman?

AN: Catwoman uses her great beauty to get what she wants. Joker’s Daughter uses her notion that “ugly is the new beautiful” to get what she wants. These two women are coming at power from opposite sides, visually. And yet Catwoman might respect and even be in a bit of awe of a girl that defiantly refuses to use beauty to rise in power. And Joker’s Daughter would respect the Catwoman’s great skill at the con, the hustle, the game. Their first battle is a turf war, and then things get very personal.

MSG: Unlike many of the Villains Month offerings, Batman: The Dark Knight #23.4 leads directly into Catwoman #24. What can you tell us about how the story continues and what the future might hold for Joker’s Daughter?

AN: Catwoman has been exploring Gotham Underground, the tunnels and caverns under Gotham City. She’s discovered Charneltown, an endlessly burning coalmine that Doctor Phosphorus has claimed as his home. She’s headed over to negotiate a deal with the Warhogs, survivalists that live in a buried Bunker in the old prohibition-era speakeasy tunnels. Catwoman notices that some of the tunnels are wet. There are clues that there is something under Gotham Reservoir. She knows from her archive research that a town called Nethers was flooded to make Gotham Reservoir. She also knows that there is a tunnel directly underneath Arkham Asylum that leads to the main Hub in Gotham Underground. So these two things: the tunnel under Arkham and the flooded town of Nethers dovetail into a surprising discovery about the survivors down in the Nethers…. This is the story that begins in Joker’s Daughter Villain Month tale, and continues in Catwoman #24.

MSG: Any special teases or final words for the Comicosity audience?

AN: I would say: “Keep your eyes on the ugly cat.”

Batman: The Dark Knight #23.4: The Joker’s Daughter arrives in stores September 25, 2013, but Ann Nocenti’s tales of femme fatales on both sides of the aisle continue monthly in Catwoman and Katana from DC Comics. 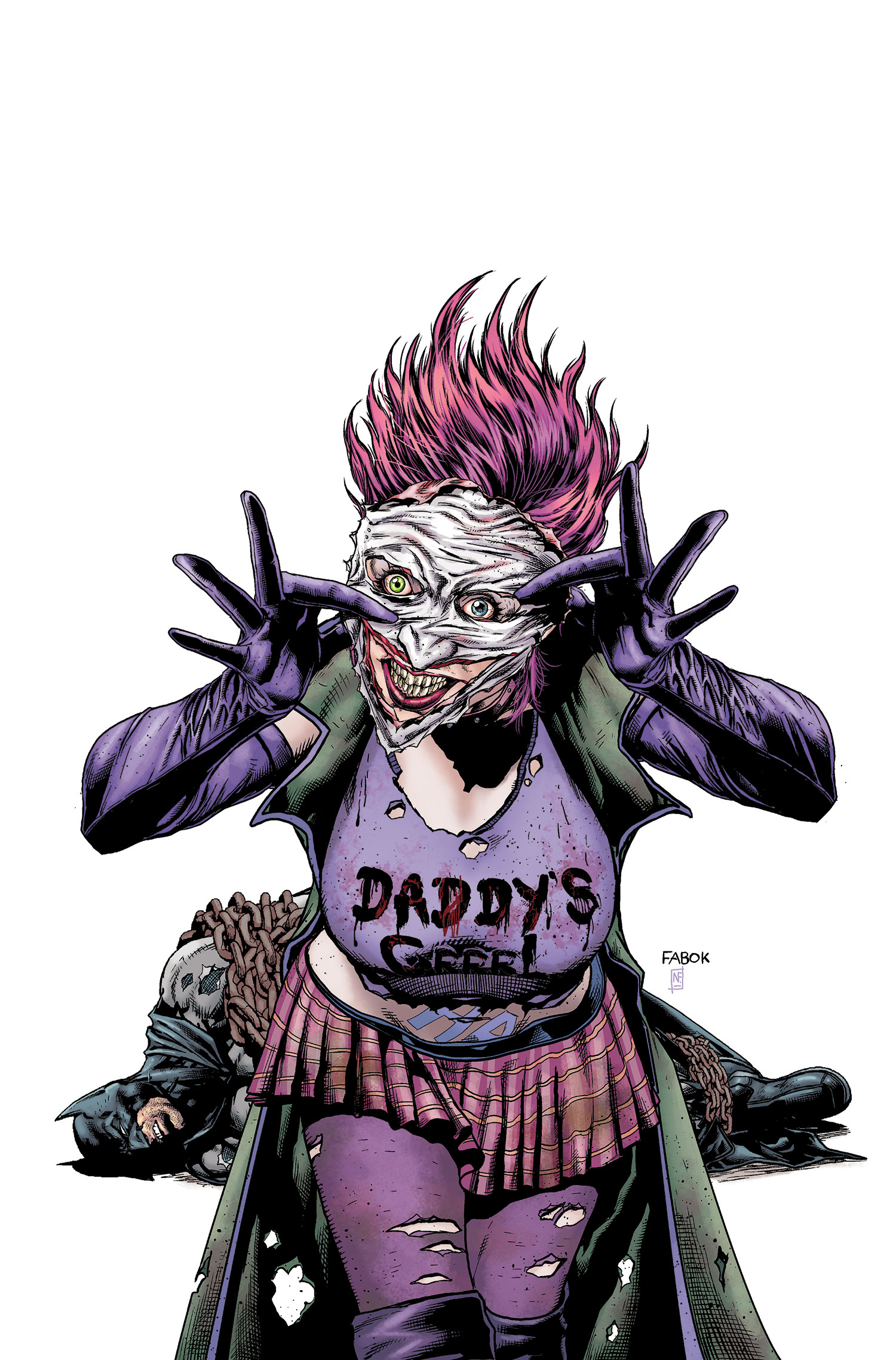 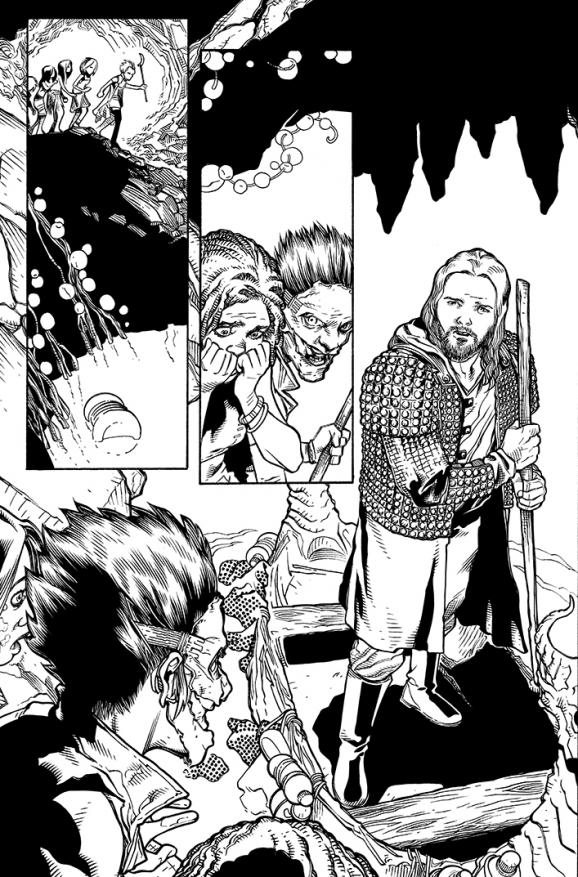 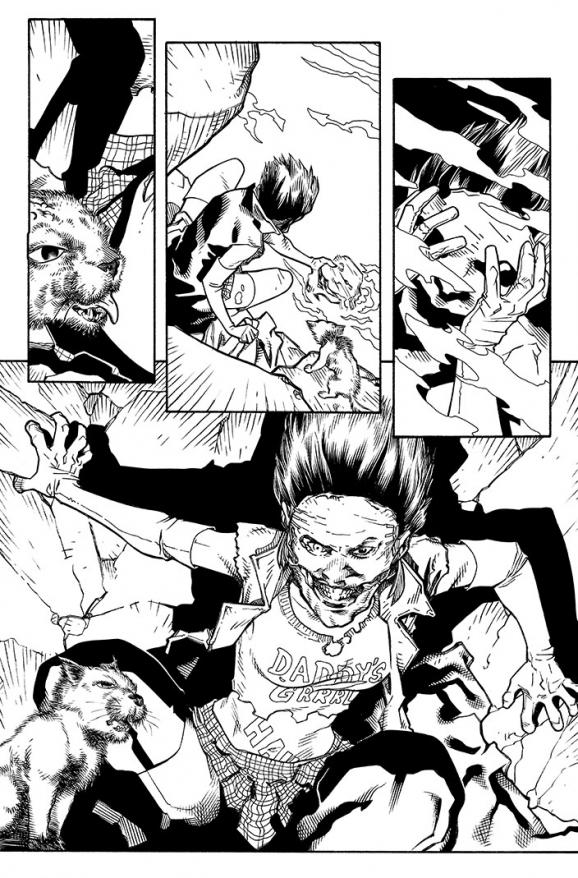