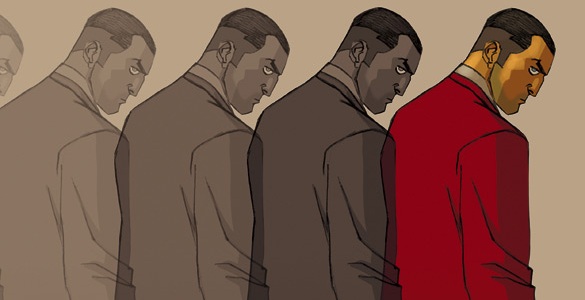 With the first stories of Creator Owned Heroes coming to a close and a fresh set of tales coming our way, it seemed prudent to chat with the architects of COH, Jimmy Palmiotti, Justin Gray & Steve Niles about what is next for the book. The trio took time out of their schedules to discuss what stories are on deck for the book, their artistic collaborators, and why pre-ordering is vital for a book like Creator Owned Heroes.

Aaron Long: The first round of Creator-Owned Heroes stories have ended with TriggerGirl6 and American Muscle coming to a close. Will fans of these stories get to take a trip back to these worlds at some point in the future or are both stories now closed for good? 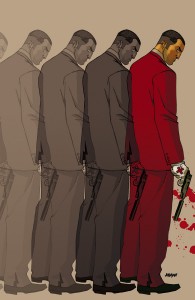 Jimmy Palmiotti: We will be listening very closely to what the fans of the characters have to say. The book is all about experimenting with characters, ideas and format and if anyone wants more, we will sure be giving It to them.

Steve Niles: The whole time Kevin and I worked on American Muscle we knew this was just one chapter of many. There will be a collection with more story and if fans respond there will be more chapters. We hope what appeared in COH was just the beginning.

AL: Justin & Jimmy, with this issue you are kicking off Killswitch, a tale about a stone-cold killer. Can you describe the character and what people can expect from the series?

Justin Gray: The story centers on a very complex and larger than life man named Kill Switch, who happens to be a gun for hire with a unique moral compass, particularly for his profession. In our first two stories for Creator-Owned Heroes we wanted to deconstruct the assassin genre. Triggergirl6 approached things from a worldview incorporating science fiction and fantasy. With Kill Switch, while it is a high-octane action oriented story, we also wanted to examine what kind of person would kill people for money and how that person maintained a sense of normalcy. We’ve always seen the solitary killer who finds love in some form and that causes him to choose a side so to speak. Kill Switch takes a different track and the realization that you can’t balance the two felt very compelling to us.

AL: Your next story, Steve, is Black Sparrow. What will it be about? 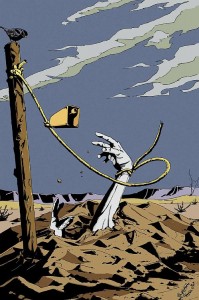 SN: It’s the perfect example of the range of material we wanted for COH. It’s a small story, very dark and surprisingly a western. Westerns lend themselves perfectly to horror, all of these families living in remote locations far away from friends or help. Black Sparrow is about a family coming to grips with the fact that one of their own might not just be a killer, but evil incarnate. The art by Andrew Ritchie is so unnerving. I think people will find it very creepy…and that’s the plan. I co-wrote it with director Jay Russell who is probably best known for My Dog Skip, Water Horse and Ladder 49. He really added a cinematic touch and by the end of the script we realized that, like AM, we were writing one chapter of a much bigger story.

AL: Both stories feature new artistic collaborators. What is your process for acquiring art partners for your Creator Owned Heroes stories?

JP: First we try to find the right match up between artist and character. There are projects where we created the specific character for the artist like Triggergirl 6 and then with something like Killswitch, we looked long and hard at a lot of people out there and found the right style we needed in Jerry Lando’s work. Although Jerry isn’t that well known in the comic community as Phil, we felt the match was perfect and we are all about showcasing new as well as established talent.

SN: Sometimes I choose artists to fit the story, but in the case of Kevin Mellon, Andrew Ritchie and (in future issues) Scott Morse, the stories come from the collaboration. Kevin’s style lent itself very well to a post human earth; he captured the wasteland so well u can taste the scorched dirt. Andrew Ritchie is an artist I worked with before on an Image one-shot called Pieces for Mom. His style is very unique and crawls right under your skin so when I discussed working with him I mentioned this quiet western and he leapt at it. Coming up Scott Morse will be joining me. Scott and I have been working together for a while now and really it’s an incredibly creative exchange we have.

JG: Preordering and word of mouth are essential to the success of any creator-owned comic. I feel that we’re offering so much quality and diverse content at a realistic price point, but not enough retailers are carrying the book. I’m asking comic shops and comic readers to give a second look at what we’re doing here. If there’s any truth to the saying that everyone that reads comics wants to make them, then we’re throwing tons of insight and ideas out there every month in addition to a pair of comic stories.

JP: We are listening to the readers and retailers as much as possible and the feedback has been more articles about the process of making comics and getting a couple of bigger names on the book as well. With issue 6 we have a regular showcase by the award winning Darwyn Cooke happening each and every issue and then we have a few surprises coming that we think will make the book even more approachable for new readers and fans. Like Justin said, it’s up to the readers and retailers to get behind the book. We have been running into a lot of people that have found their comic shop didn’t stock the book, and we are making calls to see this doesn’t happen as much in the future. It’s why we always say to pre-order the book in advance. As of today we have the first year all worked out and feedback is key for us.

SN: Not to beat the point into the ground, but we need fan and retailer support to continue and grow so that Creator-Owned Heroes can continue and grow. We have received so much great feedback and it seems people really like what Jimmy, Justin and I are trying to achieve, but we can’t do it on feedback alone. We need people to get out there and pre-order the book so retailers know how many to order. It’s tough out there and I do not envy retailers having to order on a budget from a massive catalogue so let them know you want Creator-Owned Heroes. We will continue to experiment with story and content and try our best to bring you issues chocked full of material every month. Think of your pre-orders as a vote. Your vote is needed and very much appreciated.