Fairy Quest began as one of the most ambitious kick starter comic projects to date and exceeded all expectations for creators Paul Jenkins and Humberto Ramos. Originally a series of graphic novels, Jenkins and Ramos have now partnered with BOOM! Studios to release the series in single issues. Paul Jenkins was kind enough to take time out of his busy schedule and shed a bit more light on Fairy Quest and the inhabitants of Fablewood. 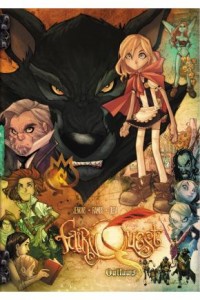 Maxwell Majernik: Fairy Quest is set in Fabletown (Apologies for the mistake Mr. Jenkins. -Max), a town where all of the stories that have ever been told live together. With so many characters to choose from, who will we be following for most of the story?

Paul Jenkins: It’s actually a world called Fablewood, and this is a place where all of the stories that have ever been told live side-by-side. There is a romance region, and a crime region, science fiction, etc.

In Fairy Quest, we follow the characters of Fairy Tale stories who are made to live in a very difficult environment: they must tell their stories properly or risk having their minds wiped in the dreaded Mind Eraser by Mister Grimm and his Think Police.

But Red Riding Hood and the Wolf (Red and Mister Woof) have become friends and they decide to get away together rather than deal with the tyranny.

Max: The description reads ‘every’ story ever told. Will Fairy Quest stick to mainly fables or will a few other characters from different stories/cultures sneak in?

Paul: In later issues, Red and Woof have to travel through some distant lands as they traverse the decrepit yellow brick road. A few other story types peek in to their world, and it is terrifying for them. Imagine trying to escape through the world of horror stories!

Max: When did Humberto Ramos come aboard the project? With his unique art style, did you find yourself designing characters or maybe scenes that showed off his strengths? 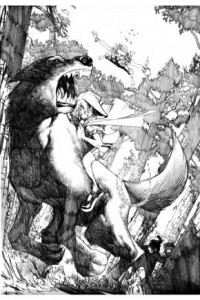 Paul: First of all, this is the book Humberto was born to draw in terms of his amazing style. He and I came together a few years ago on this book. He had a basic idea for a Red and Woof story and I had created the world of Fablewood I actually had a story involving a detective from the world of crime fiction who is given the difficult task of investigating crime scenes! (We’re doing a preview of that story soon). Humberto and I worked the entire story arc out together when I was at his
home in Mexico. So this is a true collaboration!

Max: This began as a Kickstarter project with a rather large fundraising goal of $60,000. Was it initially nerve wracking for the original request? How excited were you about the community support (of $95,000) behind Fairy Quest?

Paul: Argh, Pressing “SEND” on the Kickstarter campaign was one of the most stressful things I have ever done. But we are SO grateful to the backers for making the book a reality. To each and every backer: I owe you a hug!

Max: Is this the only story you intend to tell in this universe? Would another series or possibly an ongoing ever come from Fairy Quest?

Paul: Not an ongoing for Fairy Quest – it is a finite story. But the world of Fablewood will be around for a very long time. We are already doing the detective story as a preview, and I have a plan involving another set of characters. Stay tuned. 🙂

Look for Fairy Quest #1 to appear in stores February 6, 2013 from BOOM! Studios.