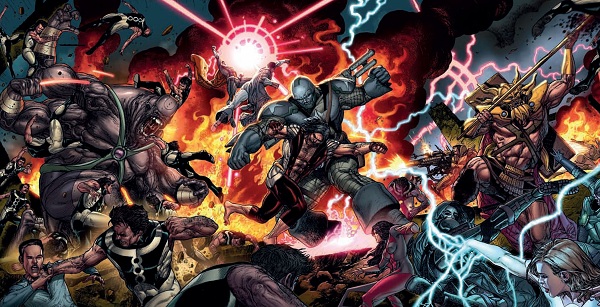 Get ready for mayhem after Christmas this year, because in 48 hours Paul Jenkins is about to transform December to “DEATHCEMBER”. Jenkins is writing a new series, Deathmatch, for BOOM! Studios, penciled by Carlos Magno. Deathmatch will be the ultimate battle royale, 32 characters enter, 1 will leave. Jenkins was kind enough to take time out of his schedule to discuss Deathmatch and what readers can expect from the title. 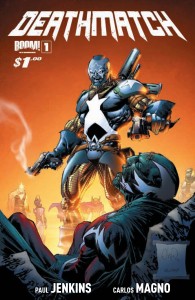 Aaron Long: Always best to start at the beginning: where did Deathmatch come from? Have you been developing the story for awhile?

Paul Jenkins: Deathmatch actually comes courtesy of the folks at Boom who approached me with a basic premise: fans are forever talking about the relative power of heroes and villains in comics – what if we actually set that up and let the characters battle it out, tournament-style?

I took that idea and ran with it, proposing an entire new world of heroes and villains, our own universe that might be presented in the style of, say, Watchmen or Astro City. I miss seeing those kind of rounded, fleshed-out universes.

AL: Deathmatch is a pretty ominous title for a series and sounds like a drag-em-out arena style brawl. Can you describe what Deathmatch will entail?

PJ: It’s very much centered around a mystery: 32 of the world’s most powerful heroes and villains are brought to an arena/prison where they are made to fight against each other. If they are reluctant, it does not seem to matter – for once inside the arena, they fight anyway, perhaps as a result of some kind of extreme hypnotism.
For the heroes, it becomes vital that they find out the identity of their captors so that they can stop this insane competition from reaching its conclusion. The people behind it all seem to have all the cards – they have a light-based security system that can keep even the most powerful hero or villain in check. They can seemingly force people to fight to the death against their will. 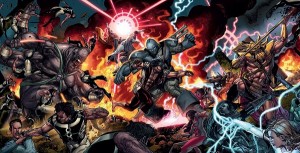 AL: Can you discuss some of the combatants of Deathmatch?

PJ: We have 32 new characters, some of whom, obviously, are not going to be around for long. The trick is to get our readers invested in some of the coolest ones. We have a guy named Dragonfly who can fly for just one minute before his powers dissolve… Unless he touches something on the ground. He flits like a Dragonfly. We have a kick ass female crusader, Sable, who is beyond intuitive. There’s a great character called the Rat who had virtually no powers but is almost supernaturally resourceful. There’s a mystery character – something scary, a monster under the bed – who is kept behind sealed doors. No one knows what is back there but we can pretty much see it is ridiculously powerful. Meridian is a Superman-type who seems to be a little frail under the calm exterior. Replic-8 can turn himself into eight versions. For villains, we have this awful creature called Cube, who is based on a cubozoid jellyfish. And there is the lovely and deadly Melody Toon who can kill people with her siren song. Plus many, many more!

AL: What is your creative process when building a world like you did with Deathmatch?

PJ: Honestly, while it requires a lot of structure and so on, I think the main idea is to have fun. Never say no to a good idea. Free yourself to think of anything cool and interesting that strikes, then see it through. Don’t be afraid to take time to create characters.

AL: How did Carlos Magno get involved with the project?