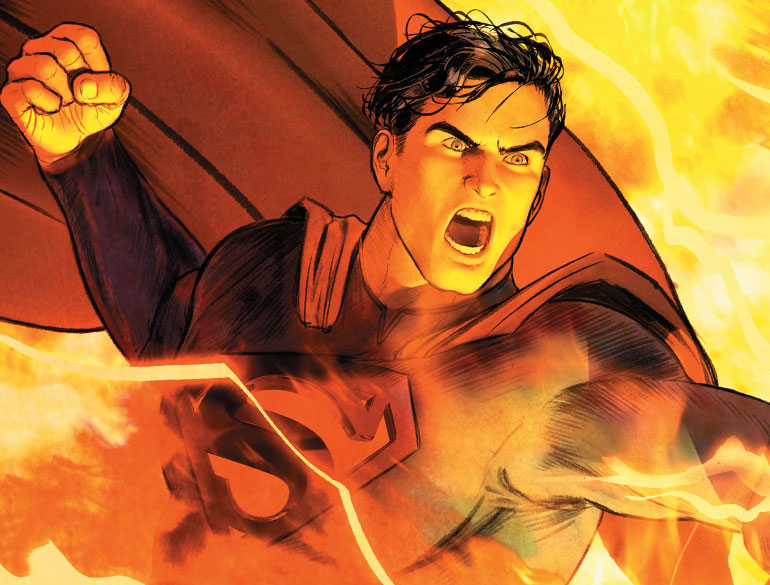 The DC Universe is well on its way to being reborn, but we have at least one funeral for a friend to attend first. As the New 52 bids farewell, so too will the New 52 Superman. Helming the 8-part crossover event in the final issues of Superman, Batman/Superman, Superman/Wonder Woman, and Action Comics is writer Peter J. Tomasi. But he has a few tricks up his sleeve before (this) Clark says goodbye for the last time.

Tomasi sat down with Comicosity to share insight on today’s Batman/Superman #31, part two of “Super League,” and to illuminate how the Clark Kent we’ve known is preparing for death with his closest Super-Friends around him: Batman, Lois Lane, and Supergirl. 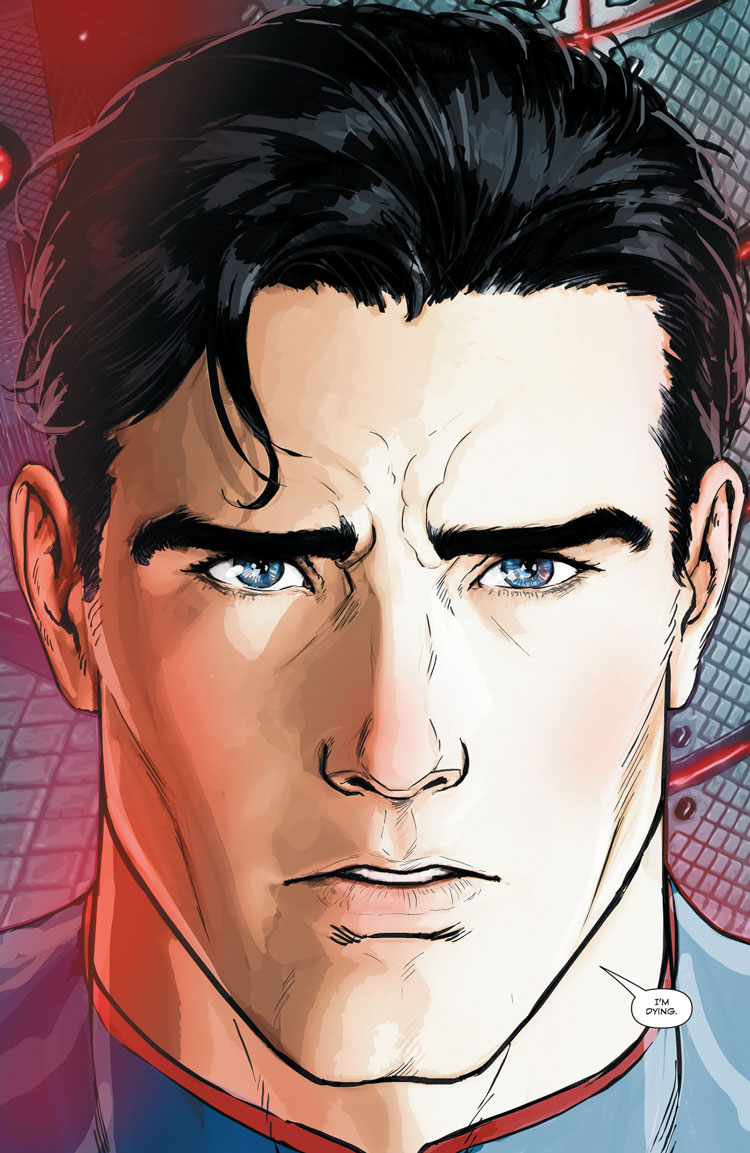 Matt Santori: You’ve had a bit of the New 52 Superman under your belt with a run on Superman/Wonder Woman. Who is that character for you, in contrast to all the other iterations we’ve seen?

Peter J. Tomasi: I really think the New 52 Superman is very similar to the Supermen who have come before. But in my mind, as I write him in Superman/Wonder Woman — and here in the death and “The Final Days of Superman” — he’s a bit more headstrong. He definitely has a bit more attitude. And he’s quicker to rely on physicality to get what he wants.

Sometimes he lets his heart rule over his head, and reacts quicker than he should in certain situations. Like, for instance, with Parasite. I know fans were complaining there that he was taking the villain to town a little too much. But you know, Parasite’s only killed a couple hundred people. [laughs] Superman is trying to stop that from happening again.

He’s just got a little bit of different style than the Supermen that have come before him. A little more impulsive. And I’ve really enjoyed playing with that. I feel like he’s been played a certain way in the past, which is great, but at least when I was writing him, there had to be something to make the New 52 Superman feel different.

Because he was different. I enjoyed writing that part of him.

MSG: Of course, this is not the first Death of Superman story… 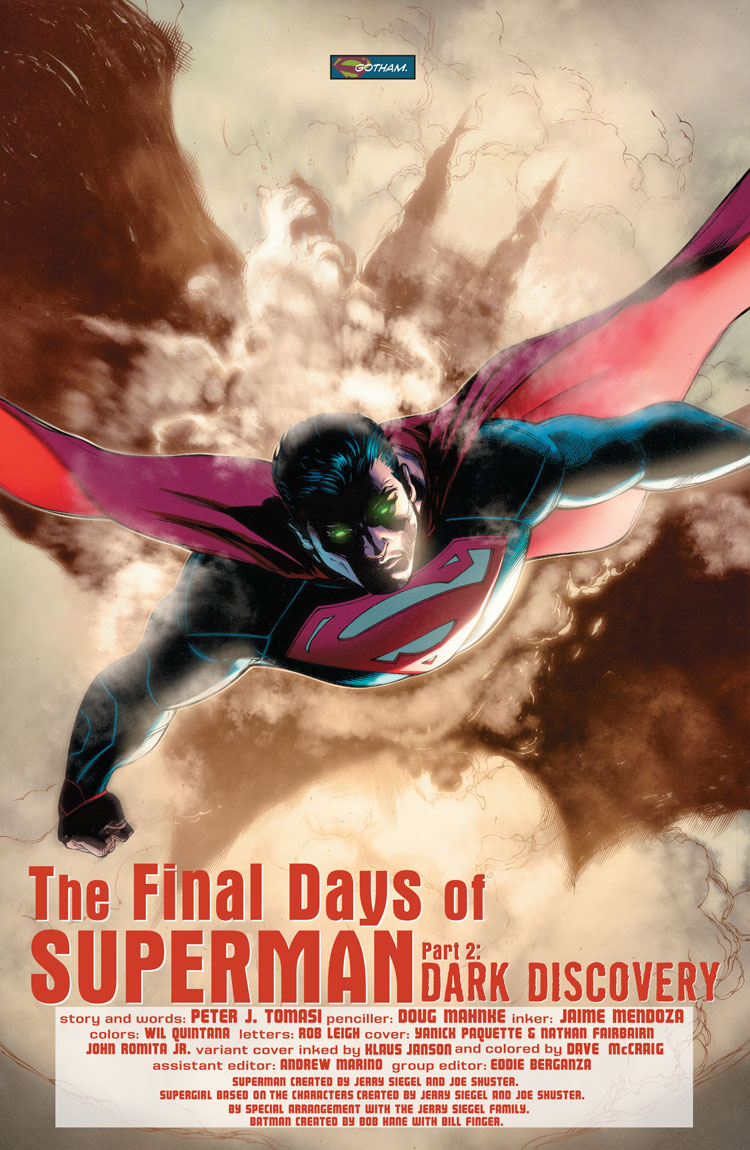 MSG: Ha ha! Yes! But the set-up you have going in the first two parts of “Super League” is a very different scenario: we know he’s dying. How do you go about setting up this story, knowing that we’ve already had this other moment before?

PJT: It was just important to look at it differently. As you’ll see in the next couple chapters, it’s not a massive slam-bam action story. It’s really more about a character arc for him and seeing how it ripples across the core Superman characters and the DCU.

It was important for me to wear my heart on my sleeve with this story and not make it as bombastic as the death of an important main character can be. It’s been done, and it’s been done incredibly well. I didn’t want to tread on ground that been traveled that way. I just wanted to build up something that maybe hadn’t been done before. And it was important that it embraced the smaller moments of the build-up, rather than go over the top. 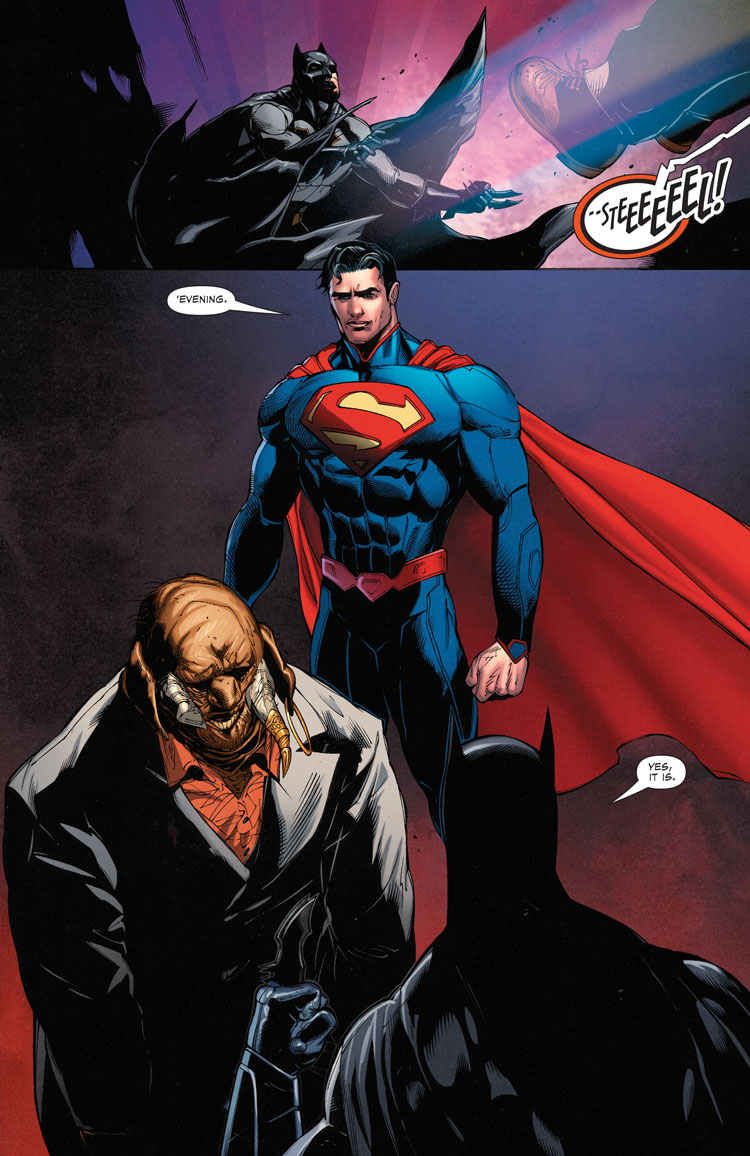 MSG: Looking at today’s issue, Batman and Superman have had many iterations to their relationship over 77 years. How would you define this one now?

PJT: It’s a big mosh-pit of stuff between this Batman and Superman. It would be hard to ignore what’s come before, but if you even just look at what happened in the beginning of the New 52, these guys have fought together to the ends of the earth. To Apokolips and beyond. It’s a relationship that deepens quickly all the time.

The thing is, they both respected each other right off the bat. Sure, they had some qualms and some issues, but these are both veterans — two soldiers in a war. They respect each other and like each other. It’s just a question of running into some speed bumps over time, over morals or ethics, or how they handle certain situations.

Batman and Superman are very different in how they approach things, but for me, it’s just easy to write them emotionally together. It’s one of those easy fits. I love when they’re just in a room talking to each other and laying out how they really feel. In their own distinct ways, of course. Not everyone is as open with each other as everyone else. Batman obviously won’t start crying when Superman tells him he can’t be saved, but it’s the way Batman reacts to this stuff that makes it really cool.

They’re both great characters that can handle these emotional roller coaster moments. It’s always fun to write that stuff.

MSG: One of the most interesting moments in today’s Batman/Superman is that Alfred can say the thing that Bruce can’t.

PJT: Exactly. That’s showing the closeness between Bruce and Alfred without the two even talking to each other. Bruce feeds off of Alfred and Alfred feeds off of Bruce. At that moment, Alfred understands what Bruce is going through, and that simple thank you speaks volumes. It’s from Alfred’s heart, but it’s also from the hearts of the people of Earth. 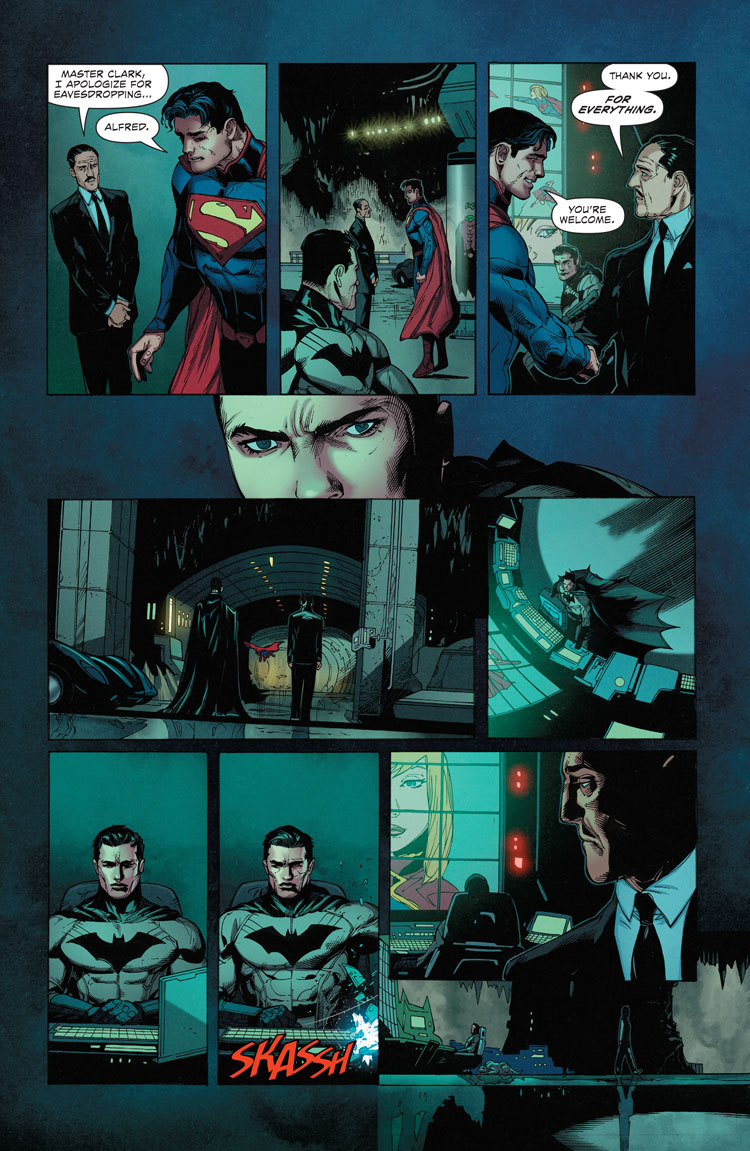 MSG: This issue is drawn by Doug Mahnke, but you’re working with an entire team of amazing artists, Doug included. Mikel Janin, Ed Benes, and Paul Pelletier… How are you writing for Doug differently than the other three?

PJT: You know, Doug and I go way back. We did Black Adam together and the Martian Manhunter Final Crisis: Requiem issue. I know Doug can pull off those emotional scenes I ask for. He’s got those humanistic scenes nailed. Any kind of personal stuff — Doug can handle it in such a quiet, emotional way. He can give me what I want without missing a beat.

Doug can do the crazy action stuff, and the smaller, human moments equally. It’s really important in a story like this.

MSG: The lead-in to the next issue sees Supergirl being brought into the fold. And like with Batman and all the others, Superman and Supergirl have a very distinct relationship in the New 52. How are you using this moment to transition Supergirl into the future?

PJT: Supergirl was an obvious piece of the puzzle for the story. He goes to Batman to tell him what’s happening with his physical health, but also to get the greatest detective to help him find Kara. He’s getting weaker and can’t do everything he needs to. He goes to Bruce to help him bring Supergirl into the fold. He needs to impress upon her now that as the last Kryptonian, she needs to take the baton and be there — not just for a small segment of her city — but for the world.

She needs to be that person with the S who can shine. To show that the S has always been there and always will be. 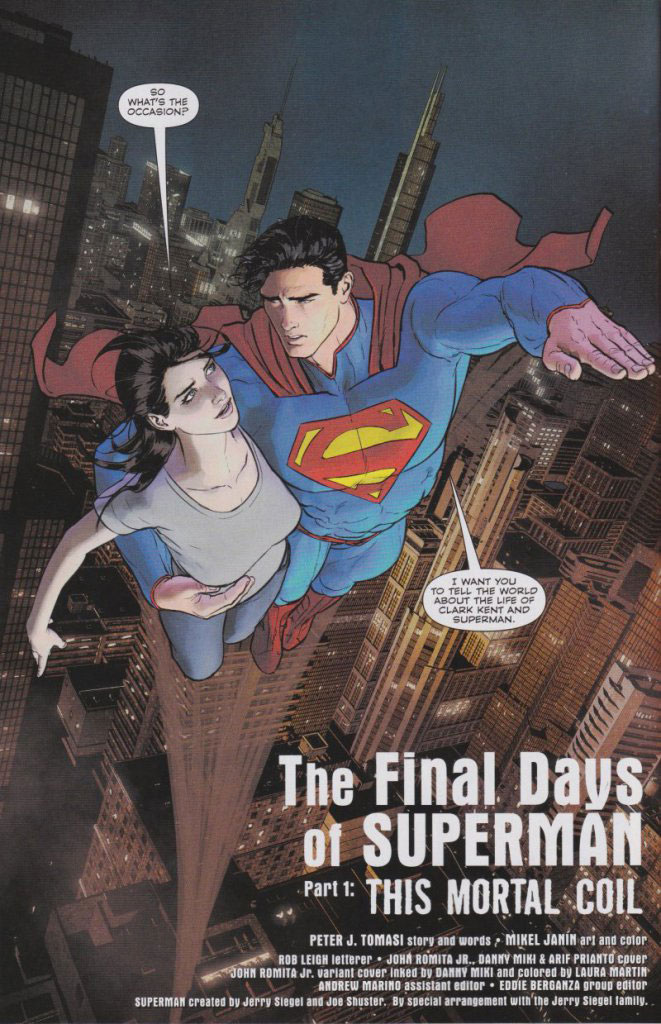 MSG: The last thing I would ask is this: we have seen Superman reconnect with Lois Lane, which is something that generally has been less of a focus in the New 52. How do you see that relationship now and what kind of things should we be looking out for over the course of the next few issues?

PJT: I think that opening salvo at the end of Superman #51 should be a strong clue as to how readers should think about Superman and Lois Lane from here on out.

I just wanted to make sure that these two were back to their core template in a way. They’re not attacking each other. They’re not enemies. They’re close. They’re tight. They’re best friends and co-workers. And they care about each other. And from this point on, I wanted everyone to understand where things are in the aftermath of “Truth” and “Savage Dawn.”

Lois got put through the ringer, but only by putting characters through the wringer do you get drama sometimes. But I wanted to make sure that, coming out of that, people understood Lois and Clark are tight again and only have better things on the horizon together.

MSG: Great! I just wanted to comment (and I believe our reviewer did, as well) that I’ve heard so many fans talk about Superman #51 as THE best portrayal of Superman in the New 52 ever. People have been blown away.

PJT: I appreciate that! It’s fun to write a big story like this and see people’s reactions and how they get pulled along with it. It’s really nice to see that reaction.

“Super League” continues with part 2 in Batman/Superman #31 today, and runs through the last week of May in every Superman family title.