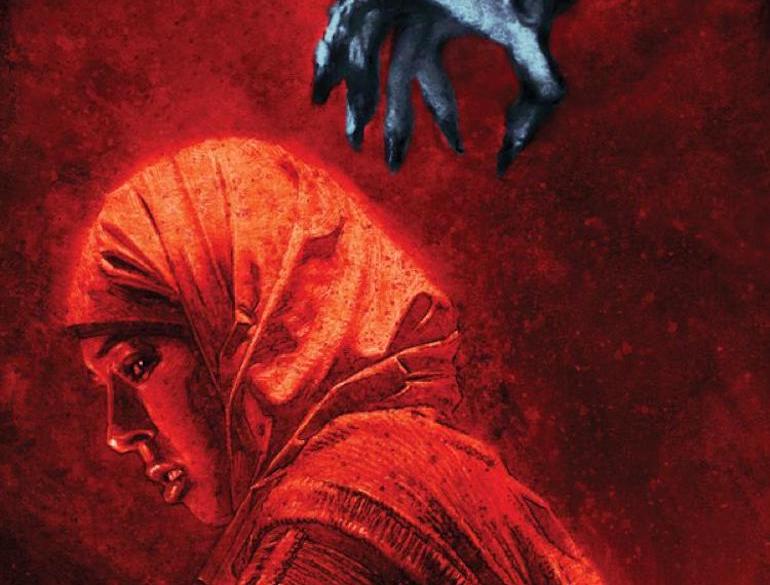 The topic of racism in our world is a theme that has been touched on in many genres. Infidel is a new horror comic book series created by Pornsak Pichetshote & Aaron Campbell, and published by Image Comics. In it he tackles this theme through the lens of the genre of horror. With realistic and horrific art, the series aims to scare readers not only with the supernatural but also the natural tendencies of xenophobia that we all have. I had the chance to find out more from the creators about what inspired this book and a look deeper into the relationships of some of the characters. 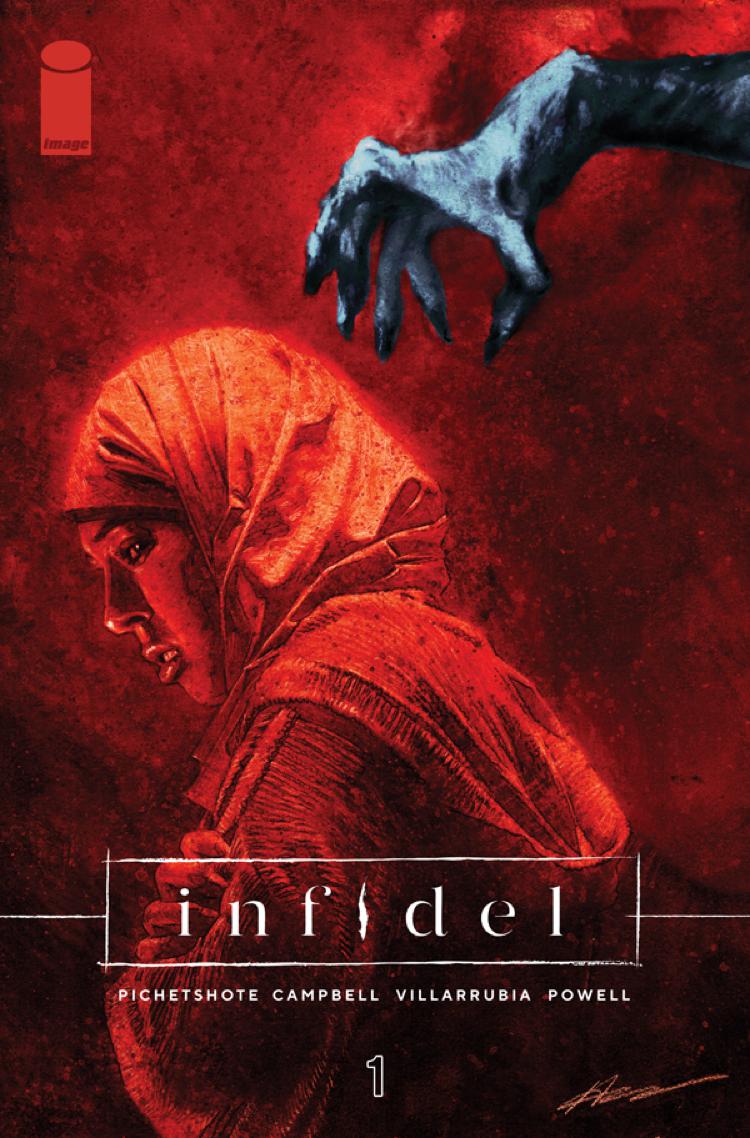 Chris Campbell: You are moving from editing comics to writing comics with Infidel. What have you found to be the most challenging to switch jobs or is it pretty similar?

Pornsak Pichetshote: When you’re writing, you’re generating material and honestly, the biggest difference to me is the blank page. I’m a huge Aaron Sorkin fan, and he once said, “I love writing, but hate starting. The page is awfully white and it says, ‘You may have fooled some of the people some of the time, but those days are over, Giftless. I’m not your agent, and I’m not your mommy: I’m a white piece of paper. You wanna dance with me?’ and I really, really don’t.” I completely agree with that. So for me, the biggest shift is that writing is constantly battling the blank page and finding different ways to tame it.

CC: Why did you choose the title Infidel? Who is the Infidel in the series or is it everybody?

PP: I don’t want to answer this too in-depth, because the significance of the title will continue to evolve as the series progresses. What I will say, though, is if you go way back to its root, the word infidel comes from the Latin infidelis which means, “unfaithful.” Of course, pop culture has us associating that word coming from the mouths of gun-toting religious zealots. The story plays on both contexts, and hopefully, readers will find interesting the different ways the title continues to be relevant as the story progresses, and it does try to ask us who the infidels in the series really are?

CC: Was there a specific event that inspired the creation of Infidel?

PP: I came up with the idea of INFIDEL years ago, back when Obama was still president, and it was something I slowly developed on my off-hours. Back then, the initial spark came from how people were talking about this post-racial society we’ve become because we had a black president and seemingly had no problem with the rampant Islamophobia on the increasingly rise. That dovetailed with my love of horror movies, and suddenly I found I had one of those ideas that was so simple but provocative I couldn’t believe anyone hadn’t done it sooner. As the years passed, and the themes of the book became more and more relevant to the world, I felt like I couldn’t just have the idea collecting cobwebs, I needed to put this book out there. 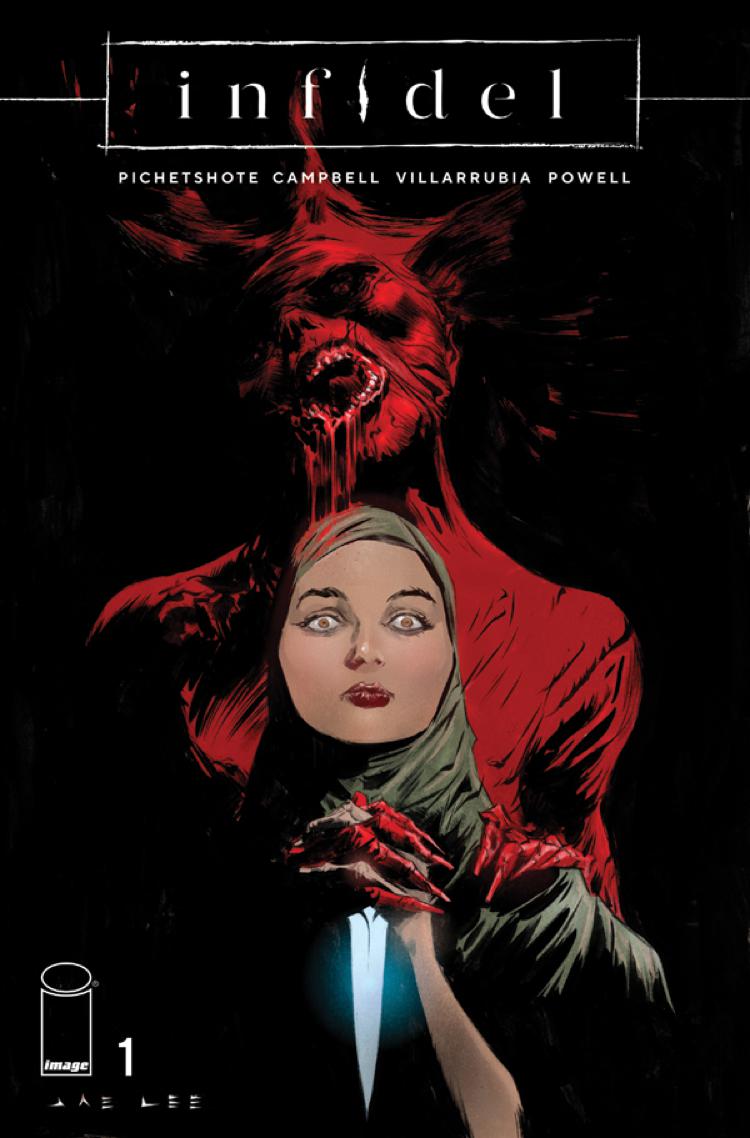 CC: Aisha and Kris are big Star Wars fans.  Are you a fan as well or was there a particular reason for referencing the saga so often?

PP: Are there really people who aren’t Star Wars fans? That said, Aisha and probably even Kris are more hardcore about it than I am. Creatively speaking, Aisha’s a practicing Muslim, and there’s the temptation to think that religious people – regardless of what they believe – live in this pious alternate reality where pop culture doesn’t exist. So it was really important to me that Aisha was a geek and her geekdom is what she bonded over with Kris. Honestly, I was really tempted to make them both comic fans, but – and this is totally a personal bias – I always get a little thrown out of the story when I see comics referenced in other comics, so I settled on Star Wars, since all my closest friends are enormous fans. On top of that, Star Wars at this point has become so multi-generational, it made sense that it would bring them together the way it has a lot of parents I know.

CC: Aisha’s relationship with her mother in law is unique. A lot of times the daughter/son in law aren’t as eager to make the relationship work. Why does AIsha try so hard?

PP: Much of it is has to do with Aisha’s history with her own family. Her mother’s intolerance cuts through her like a knife, and she finds it borderline traumatic. So when she sees there’s the hope that her mother-in-law might be more open-minded – or at least trying to be – she really wants to believe in it. And is willing to fight for it. Also, I’d say in couples I’ve seen where one person is under rocky terms with their family, while the other one values family a great deal, that other often takes on the role as reconciliatory / mediator.

CC: All of your characters seem very real and I believe it is because of their dialogue. What is important when writing dialogue for a character to bring them to life?

PP: First of all, that’s an enormous compliment, so thank you. I can’t pretend to be any kind of authority on great dialogue when there’s so many enormous talents in comics doing it so well, but I can tell you, I put a lot of pressure on myself to make the dialogue sound natural. Part of that is paying attention to the rhythm of my characters’ dialogue and just plain making sure it flows out of the mouth when I’m saying it out loud. Then it’s about making sure that rhythm doesn’t come at the expense of word count, since you have to be so economical about copy on a comics page. So it’s a balancing act.

Finally, for me, it’s keeping the vocabulary of the characters colloquial, based on their background and only indulging in flowery writing when the character is in a specific state of mind or has a very specific intention. For example, I know with my friends, if one of them is trying to illustrate a point or make an argument, all of a sudden, the talk gets pretty fancy. 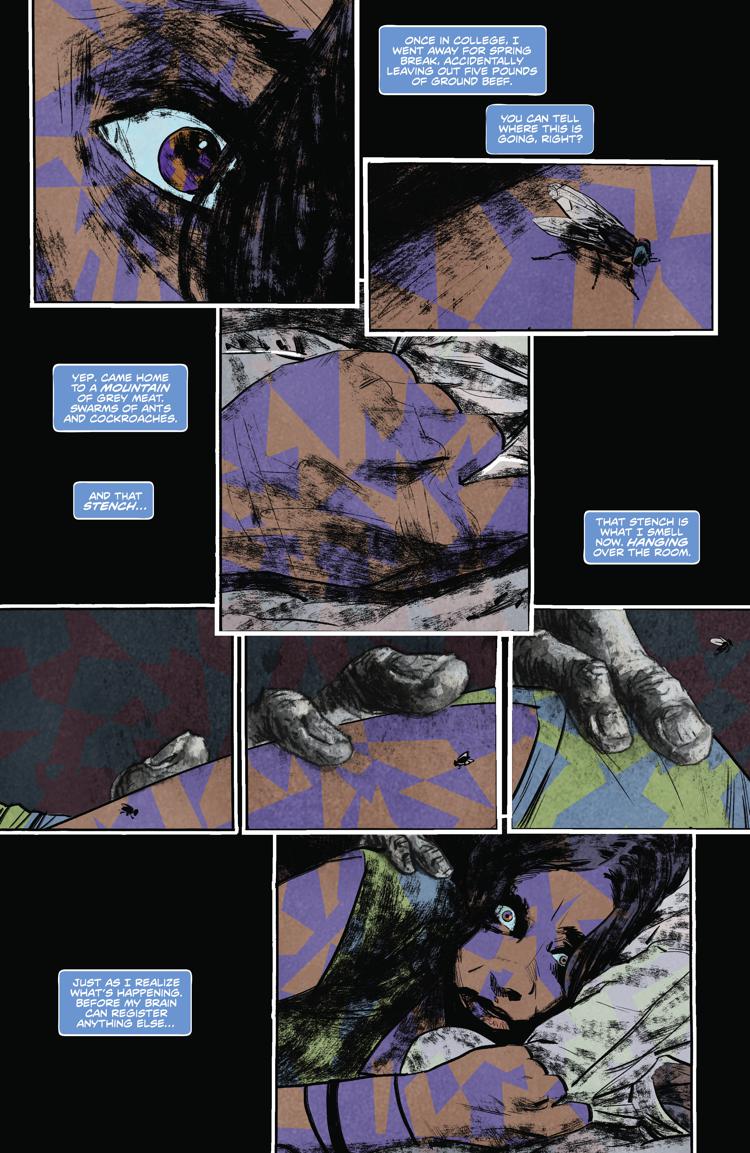 CC: What influenced the look of the creatures in Infidel?

Aaron Campbell: The look of the ghost was a pretty collaborative effort between Pornsak, Jose, and myself.  Pornsak was very much the proponent for the “weird” nature of the ghosts.  A lot of his influences for horror come from manga and Asian horror films, so he had me looking at books like Uzumaki.  Jose, on the other hand, wanted to bring a sense of hyper-reality to the ghosts that would really force the reader to see the entities as almost more real than the living characters.  So at his recommendation I was looking at artists like Richard Corben and Alberto Breccia.  Breccia was a new one for me, and I highly recommend that everyone give his name a Google.  For my part, I was looking back to the great traditional media artists of the 90’s – Dave Mckean, Kent Williams, Bill Sienkiewicz, etc.  I liked the idea of rendering all the supernatural elements of the book in traditional media while all the real life aspects would remain digital.  The thought was that the boundary between the digital and traditional media would aesthetically represent barrier of hate and anger between the entities and the characters.  So with all these different influences and ideas, I figured I could take this opportunity to really push myself and experiment.  So I’ve just gone for it, mixing media and techniques and indulging my desire to explore.

CC: How hard is it to create horrific creatures like these from scratch? Or is it easier than creating something recognizable like a human?

AC: The humans are fairly simple. I have models for all the living characters and, while I certainly have to make changes to suit them, I don’t really have to worry about consistency since I have that foundation. The ghosts, however, are something very different for me. There is a conceptual element to them that you never have to deal with in a regular person. They possess a constantly twisting, metamorphosing form that has to be tracked and maintained all the while keeping them distinct and recognizable. My idea was that the ghosts first appear as they would have looked in the very last moment of their life. They are the personification of the violence of their deaths and the potent anger and hate that manifested their spirits. So all that had to be expressed in the art somehow. And it’s something I’m still trying to wrap my head around. 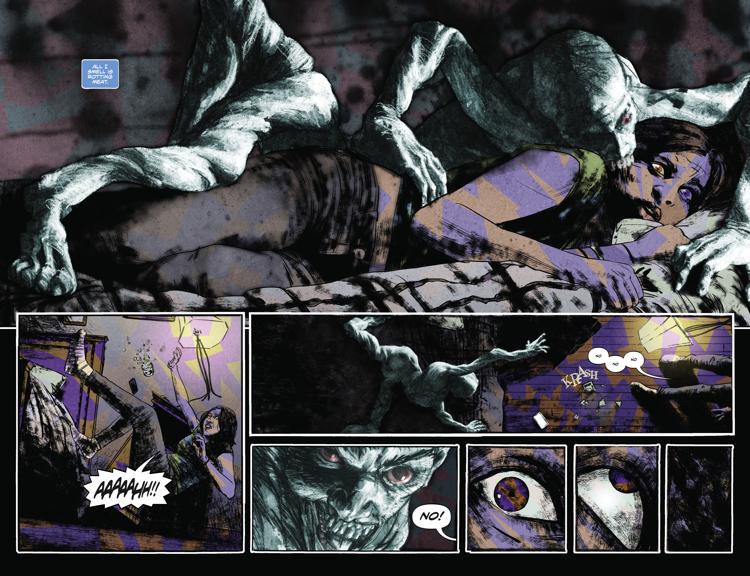 CC: You have a very photorealistic art style, but Infidel has an even more realistic look to it than some of your previous work. Why did you choose this look?

AC: I think its a combination of my evolving style and the necessities of the story. Empathy is paramount for a story like this and for horror in general. You have to feel for the characters and believe the threat. If the reader is going to buy into this particular story, which brings with it so much emotional and political baggage, it has to seem real. I don’t know if caricature can work for that. It’s in nuance where one finds the verisimilitude to life and hopefully stops thinking of these characters through reductive labels such “a Muslim” and “minority” and start seeing them as human.

CC: Why did you choose to use a smudged ink style for the shading?

AC: I’m a nerd for expressive mark making in art. The smudgy, scratchy stuff is an attempt to force myself to be looser with my work.  My natural inclination is to go tight.  I mean really tight.  So I’m always doing things to try and fool myself. 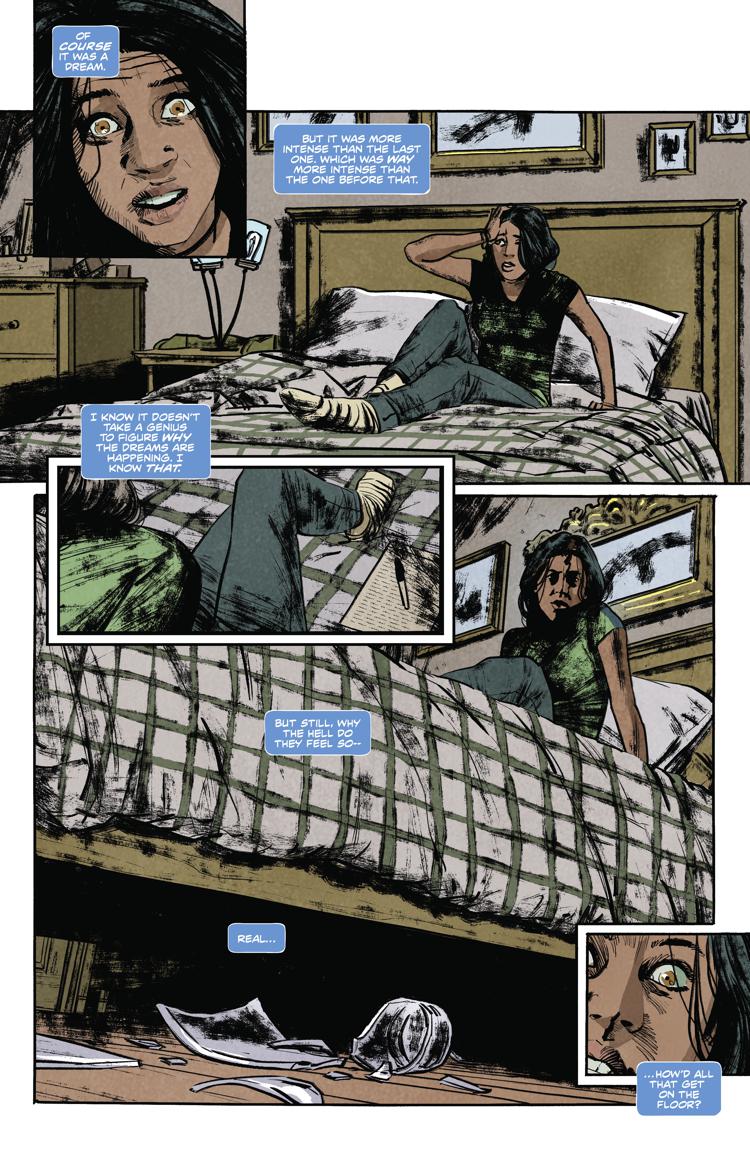 CC: There is a lot of darkness in this book both visually and storywise. How did this affect your choice of colors for Infidel?

Jose Villarubbia: Horror books are almost always dark in content and imagery. That is a cliché that we embraced in this comic – Aaron is drawings lots of shadows. And here is a secret from the colorist: If the line art has a lot of shadows, you have to keep your colors light, or it will turn into mud.

CC: Are there specific colors that you chose to affect the mood of the book?

JV: Pornsak and Aaron had ideas about the general palette they wanted, which I would describe as fairly desaturated. We are using red as the ghosts P.O. V. panels… Otherwise everything is fairly straightforward. We wanted the weirdness to be in the art, not in the color.