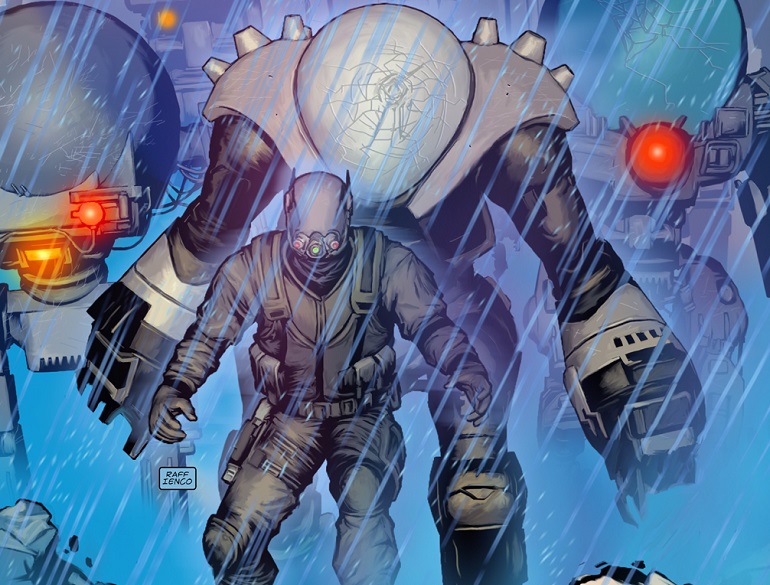 If dystopic worlds are your bread and butter, this man is someone you should be reading. From Symmetry to Mechanism, Raffaele Ienco has been busy both creating art and story for comics. I talked to Ienco about his various projects!

Mexi Gremillion: Symmetry and Mechanism are two very different stories. One is about a future utopia gone awry, one about a dystopic nightmare scenario. What inspired you to write these stories? Why choose stories about the future? Why write about these differing futures?

Raffaele Ienco: Well, Symmetry is Matt Hawkin’s story and I illustrated it. I had some influence on its direction and characters but it’s really his baby and the story he wanted to tell. But Mechanism is all me as writer and artist. With Mechanism I originally wanted to tell a short story about a farmer that meets a military robot that crashes on his farm after a battle. And in helping to repair the robot the farmer is able to unburden his conscience about an accident that happened long ago with his twin boys that killed one of them. The robot never conversed back but was a good listener. Aliens attack the farm and mortally wound the farmer despite the efforts of the battle robot. At the end, the farmer, now dying, asks the repaired robot to find his remaining son (estranged and now a soldier in the war) and make sure he’s okay. The robot nods and flies off as the man dies. I still want to do this particular story sometime in Mechanism but the actual series just kept expanding as I asked more and more questions about the world I created.

Mechanism had a combination of many of my favorite elements in stories namely robots, aliens and a ruined society and environment with characters that have strong emotional depth.

MG: One of the only themes that overlaps in both Symmetry and Mechanism is the weariness towards an all-knowing machine and allowing technology become the savior of humanity. Why is this theme important to your stories? 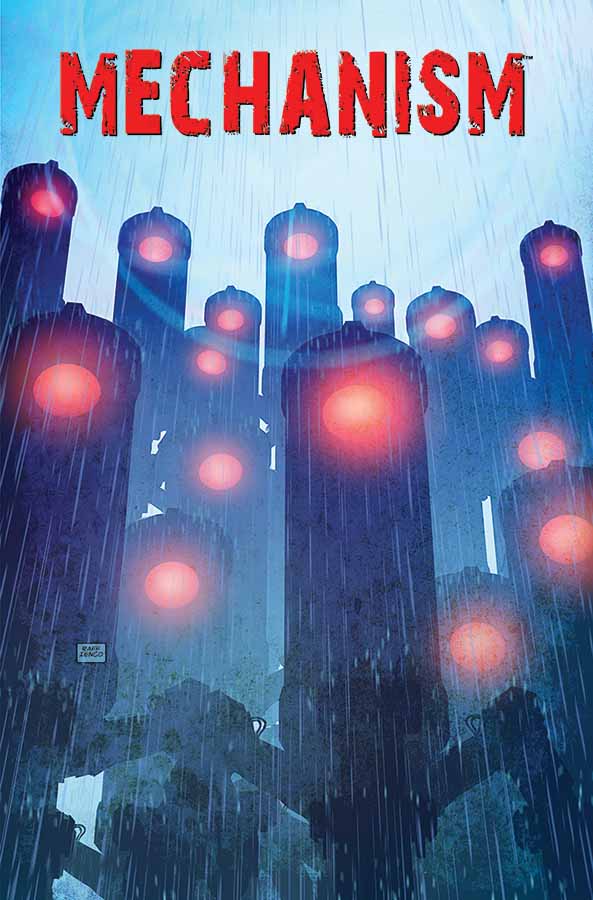 RI: Probably the biggest influence on me in regards to A.I. was the movie “DemonSeed” which was based on a novel by Dean Koontz. The A.I. in that movie is called Proteus and has one of the best creepiest computer voices ever. Proteus, even though it is the “villain” of the story, still comes off as very wise and practical. I can totally understand its motives. I saw DemonSeed on TV when I was like 10 or 11 and I loved it. And what a great ending! Ever since then I’ve loved movies with A.I. Some favorites are Terminator, War Games, 2001: A Space Odyssey, Colossus: The Forbin Project and The Matrix.

So, in Mechanism, I also wanted an A.I. that was NOT EVIL but makes decisions that are both wise and practical, and yet not everyone would agree is in their own best self-interest.

I love artificial intelligence stories. I guess it’s the notion that purity of mind uncluttered by being raised in a human environment will offer up incredible wisdom and insight. Even if that wisdom comes to the conclusion that man is its own worst enemy and that the Earth is really better off with less or even no humans around. Some of the things Mechanism has touched on.

RI: In Symmetry, I loved illustrating scenes with the Pacifiers (the police robots that kept order) who were inspired by the cops in the movie THX-1138. One of the Pacifiers from Asia was a friend to Julia and I enjoyed his ninja-bot incarnation.

In Mechanism, one of the secondary characters named Charles Gibbons ( the black flight cop) grew into a major character and one of my favorites. He tolerated no b.s. and expressed himself truthfully and wanted to succeed on his own without the boost from friends. The death of a close colleague made him re-examine how he really felt about that person, surprising himself. I would really like to develop him further.

MG: Between Symmetry and Mechanism, my favorite scene has been the first few pages of Mechanism where the reader first sees the Geckos. There’s something ominous yet gripping about how they fall from their spacecraft, how the creatures swim in the ocean towards the coast. What has been your favorite scene in both Mechanism and Symmetry? 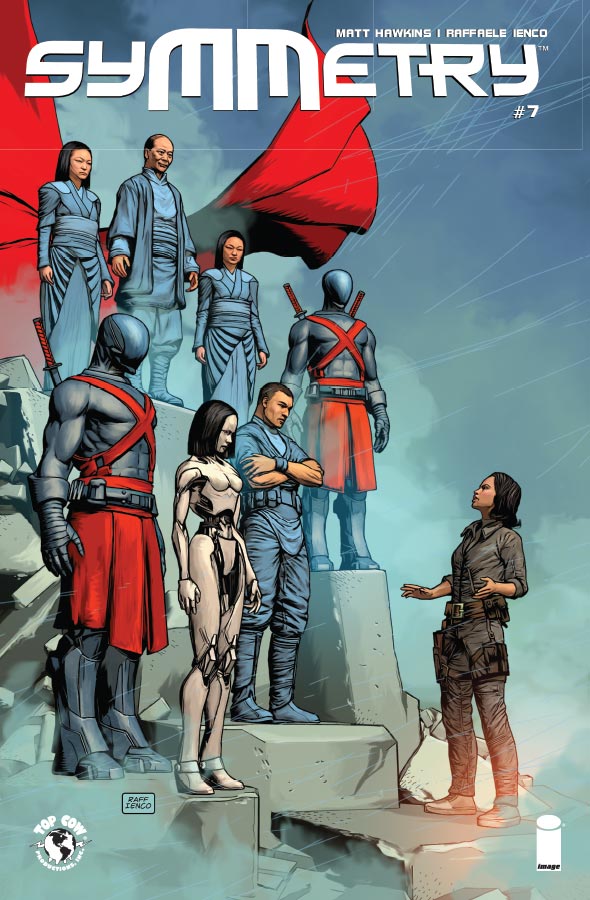 RI: My Symmetry favorite scene is Michael and Maricela being chased by the Pacifiers in issue 4. Anyone familiar with my work knows I love chase scenes and always find a way to have the characters I’m illustrating being chased. The original “Point Break” had one of the best foot chases ever with Keanu Reeves targeting Patrick Swayze through the L.A. streets and also “The Matrix” again with Keanu being hounded by Agents.

In Mechanism my favorite piece is, oh god, another chase scene! Tom Burg and Six Janes are running for their lives from the Sentries in issue 3. I guess there’s something primal and thrilling about being chased. Have you ever seen a child play “catch me”? Those are thrilling screams of joy.

RI: The Symmetry World is safer by far but it’s society has lost its edge and imagination. You are spoon fed your life and coddled like a child. I’d go crazy there and want to tear it all down. I’d choose to live in the Mechanism World but I might be biased because that’s wholly my story. Sure, in Mechanism humanity is on the decline and aliens are killing everyone but there is a chance to survive and sometimes living on the edge is actually… living.

MG: Symmetry wrapped up well in issue #8, but it feels like there could be many stories told within that reality. Will we be seeing more of the world of Symmetry in the future? 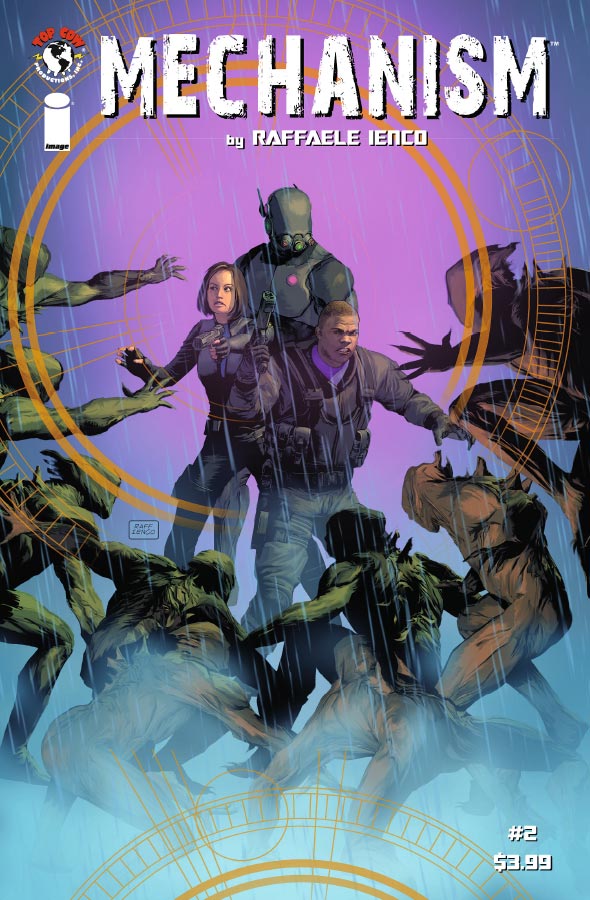 RI: Matt Hawkin’s has said he has a third arc in mind and if sales hold up we may well explore that last segment of the story. Personally, I would like to see how the Symmetry World came to go their separate ways in regards to the races of man. A race war must have necessitated the separation of the races or else face the end of humanity, I’m guessing. Or maybe it was another startling factor…

MG: Issue #5 of Mechanism marks the end of its first arc. Is there anything you can say about what will come in the next arc? Will there be a time skip similar to Symmetry? Will we learn more about the aliens who invaded earth?

RI: No time skip. Yes, we’d learn more about the Geckos and their creators. I would also love to explore how Charles and Jill really feel about each other and what they’re gonna do next now that they’re on their own. Also what’s Horus and Ben gonna do now? Tom and Six? Protos? The notion I had was to awaken the old robots of the first invasion and have them accompany different survivors and help them in some cases not help them in others. The opposite of help. As the parent Protos watches and learns about humanity and the Geckos and judges which species should gain the Earth as a prize. In every movie they treat humanity as always deserving of continuity but I’m really leaning the other way just for the sake of being different for once.

MG: Besides Symmetry and Mechanism, are there any other projects that you are excited about?

RI: Matt Hawkins and I are working on a new project together. I’m excited because I’m trying out a new art style for it. Top Cow and Image will announce it in the new year for 2017 release.

Thanks and peace out!