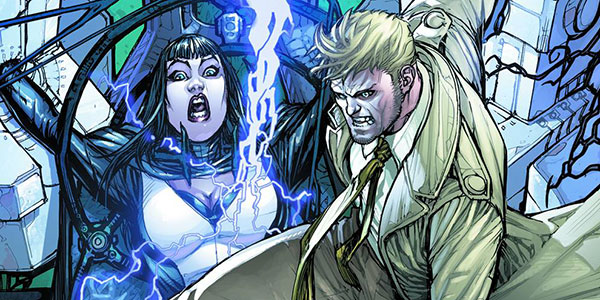 The DC Universe has experienced an explosion of villains of late, but the original bad boy of DC Comics is still going strong as Constantine reaches its twelfth issue. Despite the noticeable break from his past incarnation in Hellblazer, John Constantine is starting to show a bit of the past we’ve always known, ably laid out by series writer Ray Fawkes. Fawkes was kind enough to answer a few questions about John’s history, his future, and the lovely lady driving John through the Forever Evil: Blight crossover: Zatanna. 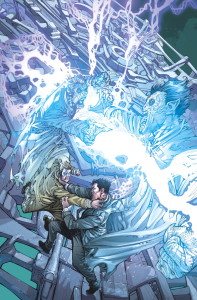 Matt Santori: Ray, thanks for taking time out to chat with Comicosity! Now that you’ve officially been rooming with John Constantine in your head for a year, how has your thought process on his characterization strengthened or changed?

Ray Fawkes: Compared to a year ago, my thought process when writing John has become radically streamlined — if only because all of the hidden machinery of John’s thought and emotion has become so familiar to me. I don’t do as much page-flipping in my notebooks, because I know this version of  John now. I’m not defining so much as revealing him at this point. I’m not sure if the distinction makes sense when I say it out loud, but it’s significant to me.

MSG: We get to see a bit more of John and Zee’s past relationship with Nick open up. What do you think this deep connection among the three of them opens up in John’s self-concept that wasn’t there before now?

RF: John’s an expert at denial, and readers now know that John’s relationships with Nick and Zatanna are deeper and more complex than anyone assumed before. And, one expects, more painful. Now he’s had his face ground in the realities of their past, and found that he could no longer dodge the subject. Nick’s refusal to be demoted in John’s recollection just before their fatal confrontation will shake John to his core — and that’s just the beginning of the emotional shocks he’s about to experience. 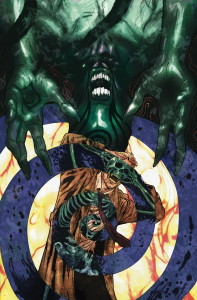 MSG: The Constantine of your title is one that appears to care much more deeply for another human being than any version previous to now. From your perspective, is his partnership with Zatanna a strength or liability for John as a magic-user?

RF: Ah. Well. On the one hand, it’s lent him a kind of power and clarity of purpose he would never have experienced otherwise. On the other hand, it’s done something really, really terrible to him. Issue #13 is going to show just how terrible. If people think John’s relationship with Nick turned out to be toxic, wait until they see this, and they will see why the second year of this book is headed in what may be a very surprising direction.

MSG: With some of the flashback scenes, it seems clear that John’s bisexuality is still thankfully a part of his character. As one of the few LGBT leads to have his own solo title, what place do you think this title plays in the overall market representation today?

RF: Honestly, I think it just put Constantine in with the rising tide of books that happily demonstrate that Straight White Men are not the only heroes out there. It’s not a trailblazer by any means — John’s sexuality was well established years ago, in the Hellblazer days, and to me it’s simply a feature of his character, no more or less part of him than the fact that he’s blond, or a chain-smoker, or a talented mystic. 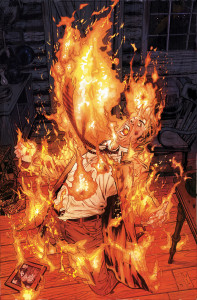 MSG: As we near the end of Forever Evil, how has the collaboration with writer J.M. DeMatteis been and what opportunities do you feel that opened up that wouldn’t have been there otherwise?

RF: It’s been an incredible experience. I’ve said it before, I’ll say it again: J.M. DeMatteis is a class act, and I was astonished at how easy it was to work with him and how encouraging and open he was to sharing ideas. We both challenged each other, I think, not just to tell a larger story that we’re both very proud of, but to go deep with our respective characters and take the opportunity of this crossover to really make all of them shine.

I would say that I benefited more than he did from this collaboration, in all honesty. His experience and his keen eye for emotional characterization were invaluable to me in the process, and I feel I owe him a great debt for the lessons learned.

MSG: At the conclusion of issue #12, we see John headed back to a very familiar place in Constantine history: Hell. Is this his first trip down, and how will the experience be different than what we’ve seen in the past with the more seasoned Hellblazer character?

RF: It isn’t actually John’s first exposure to Hell – it’s just the first one we’re seeing in this series. John went through something terrible early in his career in a place called Newcastle. It was mentioned earlier in this series, and Hellblazer fans will be familiar with it. We’ll be seeing more about that later — for now… well, remember how I said John’s an expert at denial?

MSG:  Any final thoughts or special teases for the Comicosity audience?

RF: I want to thank the readers who’ve been with Constantine thus far, and those who are joining us now. I promise you, John’s in for a year of horror, cruelty, and staggering tricks that will shock and amaze you. He really is one of the coolest and most dangerous heroes in the DC Universe, and he’s going to prove it.

Ray Fawkes pens Constantine monthly for DC Comics, as well as Trinity of Sin: Pandora — another title wrapping up its Forever Evil: Blight storyline this month.