Announced at SDCC 2012, Oni Press will be expanding their webcomic initiative with Jamie S. Rich and Natalie Nourigat’s A Boy & A Girl. The webcomic will feature two characters in a slightly futuristic world who meet by chance and do their best to act upon feelings they have for one another. Rich and Nourigat were kind enough to take time from their schedules to discuss the project and what readers can expect from A Boy & A Girl.

Aaron Long: Jamie & Natalie, how did A Boy & A Girl come to be? Has the project been in development for awhile? 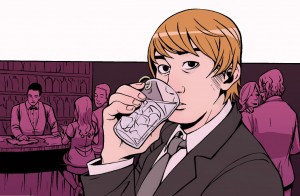 Jamie S. Rich: There was actually a pretty short runtime from conception to beginning to completion. Once we decided we were going to do something, there was no stopping us. Probably the longest period for me–or what felt like the longest–was figuring out exactly what we were going to do. There was a lot of me scribbling vague ideas and e-mailing them to Natalie and getting her feedback. I don’t even remember know how we ended up with the future setting and the idea of working artificial intelligence and the related themes into the book. I just know I had a mission from Natalie to give her something with a strong woman as a main character, something she’d want to read herself, and working from that. The challenge for me at this stage in my career is I can’t just write another relationship story without coming up with a new angle, with something interesting about the main characters or their world that sets it apart from 12 Reasons Why I Love Her or Love the Way You Love or any of my prose novels. So, the development process really became searching for a setting and building out from there. Setting it in the future opened up what we could do visually, and then making it a future where robots were living amongst humans and taking over human duties, it brought up a different way of approaching identity issues and what we define as “real,” including real emotions, spirituality, etc. How do two people find each other in this kind of society?

With that as the genesis point, I just started writing until it was done, and Natalie started drawing until she was done, and it’s been in the can since early 2012 or thereabouts.

Natalie Nourigat: Jamie and I knew we wanted to do a book together, and it was such a treat that he let me into the brainstorming phase. He offered up a lot of different ideas we could pursue and asked me what I did/didn’t want to draw. I liked A Boy & A Girl over the other stories we were talking about because of the dual-narrative style. One thing that I think started us in the somewhat surprising futuristic direction we ended up taking was a warm-up drawing I did in 2010 that I really liked. I made up this story about a time-traveler to go with it, and I asked Jamie if he could do anything with that. None of that stuff stayed in the final story, but Jamie started exploring sci-fi elements and got on a really great track for the concept that eventually became A Boy & A Girl.

AL: Straight from the creators’ mouths: what is the world of A Boy & A Girl like? What kind of setting can readers expect? 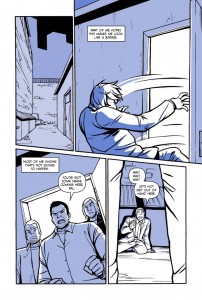 JSR: An amalgam of what you know from present day and what we can imagine a better tomorrow will be like. There are sci-fi tropes like flying cars and the like, but we also imagined a class structure where, as buildings got taller, it became a sign of social status to live higher in the air, away from the dirt and the muck on the ground. So expect all kinds of odd inventions that relate to class, things meant to protect the rich and inaccessible to the poor. I think my favorite setting is the nightclub, Bobble, which is like this big neon ball up on the roof of a skyscraper, accessed by tiny walkways many stories up, no net below.

NN: We’re in the near future, with shiny new toys and societal infrastructure just doing its best to keep up with the changes recent inventions have brought. I think it’s really fun working in that kind of space; there are a lot of quirks and gliches in this world that characters can manipulate.

AL: Can you describe Travis and Charley, and what is driving them through the story?

JSR: Both are in their early twenties and at the point where life is about to take a turn, either to the good or to the bad. Charley is a girl who knows what she wants, and she’s signed up for an occupational placement program that is about to come through with an assignment. She’s eager to get to work and start being an adult. Travis, on the other hand, is about to be cast adrift. He is finishing up a degree in philosophy, with a focus on ethics and morality in the digital age, things like how do we treat a robot and how we define ourselves as humans in an era when personalities can be built out of strings of code. Like so many college students, he realizes that what was really interesting to him four years ago is a totally impractical field, there is no way to make money off of this. So what the hell do you do once the system sends you out into an adult existence you may not be prepared for? He meets Charley and they end up on a limited timeline: she’s going to ship out, they’ve only got a short amount of time, they have to make the most of it. So, most of the book is one long date, dusk to dawn.

NN: All I would add is that there’s a wryness to both Travis and Charley that makes for fun exchanges, but neither of them is so jaded that they can’t speak candidly or be sincere with one another. It’s a good mix. I got totally sucked into the story I was drawing—they’re both very fun and you can’t help rooting for them. 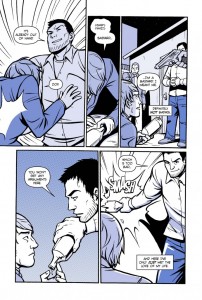 AL: Natalie, what was your design process like for A Boy & A Girl? Did you have any specific things that influenced your design of this world?

NN: For me, step 1 with developing the artwork for a comic is understanding the characters. I read Jamie’s scripts while they were in production and I read the final draft all the way through, trying to pretend I was reading it for the first time. There were very few specifics that he demanded based on that, so I had a lot of room and I just sent him a bunch of different looks for Travis and Charley that I thought could physically represent the people he’d written. Once I settle on main character designs, the rest of the world falls into place. It all comes back to facilitating the story and framing the characters. Since Jamie was open to collaboration, we did a lot of back and forth as I developed different elements for the story. He gave me some movies I could watch if I wanted inspiration, and I think we were both listening to The ArchAndroid and Metropolis by Janelle Monáe while working. I had a block with designing the night club “Bobble”, and Jamie cured that by sending me songs he thought they would play at Bobble.

AL: Last words are to the creators: any final words for Comicosity’s readers regarding A Boy & A Girl?

JSR: I’m really excited to have people finally be able to read this book. It’s one I’m immensely proud of, and the collaboration with Natalie was a lot of fun. She’s a great teammate, she really challenged me to write better and expand my boundaries, and just imagining how she’d draw something caused me to take the story to unexpected places. I think people are going to be really surprised by what impressive chops she has as a cartoonist. Like, you read Between Gears, you know she’s good, but you had no idea she’s this good. And I like that the material is going to be part of this new initiative from Oni Press, since the comic itself is about trying new things, about going out on a limb.

And Natalie and I are working on new collaborations already. In fact, you’re going to see us together again this coming May. She drew two issues of It Girl and the Atomics, and her new pages are ridiculous. Again, having her on board forced me to come up with something special I wouldn’t have done otherwise, and I think it’s going to knock plenty of socks right off.

NN: I can’t wait for people to read the comic. I’m very curious to hear the response. I spent a solid year drawing it, I colored in Pantone for the first time…it was a stretch for me and I hope that people like it. Jamie has dedicated fans who will be surprised by what he’s done here. I’m sure he’ll have scores of new ones in addition. Anyone who wants more can check out his work on It Girl & The Atomics, and hopefully you’ll read issues #10 and #11 that we collaborated on!