DC Comics recently announced that, with issue #16, Demon Knights will be written by Robert Venditti. Venditti, writer of X-O Manowar, The Homeland Directive, and The Surrogates will take the series 30 years into the future with his first arc, and was kind enough to take time out of his schedule to discuss where the series is headed, the cast at his disposal, and his take on Demon Knights.

Aaron Long: First things first, how did you get involved with Demon Knights? 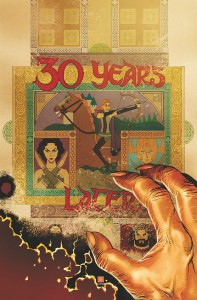 Robert Venditti: Jeff Lemire introduced me to Matt Idelson at DC, and Matt and I have talked for some time about wanting to work together. When DC found out internally that Paul Cornell had decided to leave the book, Matt recommended me to Demon Knights editor Chris Conroy. Chris was already familiar with my work on X-O Manowar, and he thought I might be a good fit for the title. He reached out to me, and I was immediately interested in the job. Paul created such a unique cast of characters, and the setting is unlike anything else in the DC Universe. The chance to write a series like this doesn’t come along very often.

AL: The title will be flashing forward 30 years when you take over. Can you discuss what has happened during that time, and why the decision was made to jump forward in time?

RV: When the current arc ends with issue 15, there will be a clean jumping-on point for the series. That, coupled with the high number of immortal characters in the series’ cast, seemed to present an opportunity for leap forward a little in time and see how that would effect each of the characters differently. What the characters have been up to in the interim will come to light in the first few issues of my run.

RV: All of the characters are so full of narrative potential. There are the characters like Etrigan, Madame Xanadu, and Vandal Savage—who readers are already familiar with from DC’s history—but just as interesting are the new characters like Exoristos, Horsewoman, and Al Jabr. All of them are outcasts in their own way, so forcing them into situations where they have to be part of a team opens them up to a ton of conflicts.

Shining Knight is one of my personal favorites in the series, and we’ll be building a bit on her relationship with another member of the cast. As for Etrigan, in the short term, he’ll be rhyming on and off, but it won’t be a constant.

AL: As is heavily evidenced in our New 52 timeline, Demon Knights is a book that acts as a deep history title of the DC Universe. Have you been working closely with other creators planting seeds within the title that will eventually show up down the line?

RV: I’m just getting started, so my focus right now is writing the best Demon Knights stories I can. To that end, I’ve spoken with other DC writers about the elements of their books that I can weave into my own, since this arc will be more about shedding light on an already established storyline from DC history, rather than trying to write something into the present. But that doesn’t mean I don’t have other designs . . .

AL: Any final words for Comicosity’s readers regarding Demon Knights?

RV: Pick up issue 13, if you haven’t already. It’s my favorite published issue yet. Of course, just a few minutes ago I read issue 14, and it’s exceptional as well, but you’ll have to take my word for it because it won’t be on the stands for a few more weeks. Chris gave me an advance peek. One of the perks of the job!