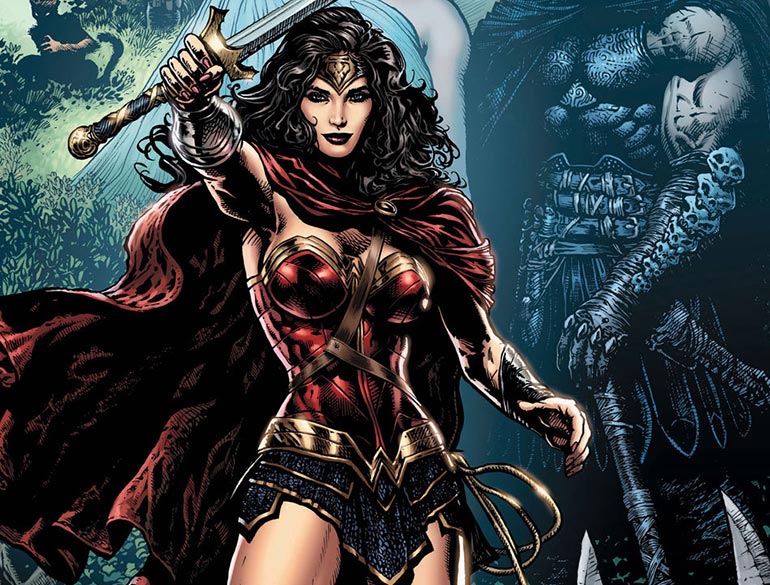 One of the most eagerly anticipated series of DC Comics’ upcoming Rebirth is not just one book — but TWO-IN-ONE, as returning writer Greg Rucka relaunches Wonder Woman with two alternating stories, each with an exceptional artist at the helm. The first, “The Lies,” is an ongoing story set in the present day illustrated by Liam Sharp. The second, “Year One,” is set ten years in the past, as Nicola Scott depicts 18 year-old Diana first coming upon Steve Trevor on the shores of Themyscira.

All three wonderful creators sat down with Comicosity to discuss their relaunch of DC’s top hero (no qualifier there!) and share a bit of their thinking as they begin a new era for the Amazon Princess. 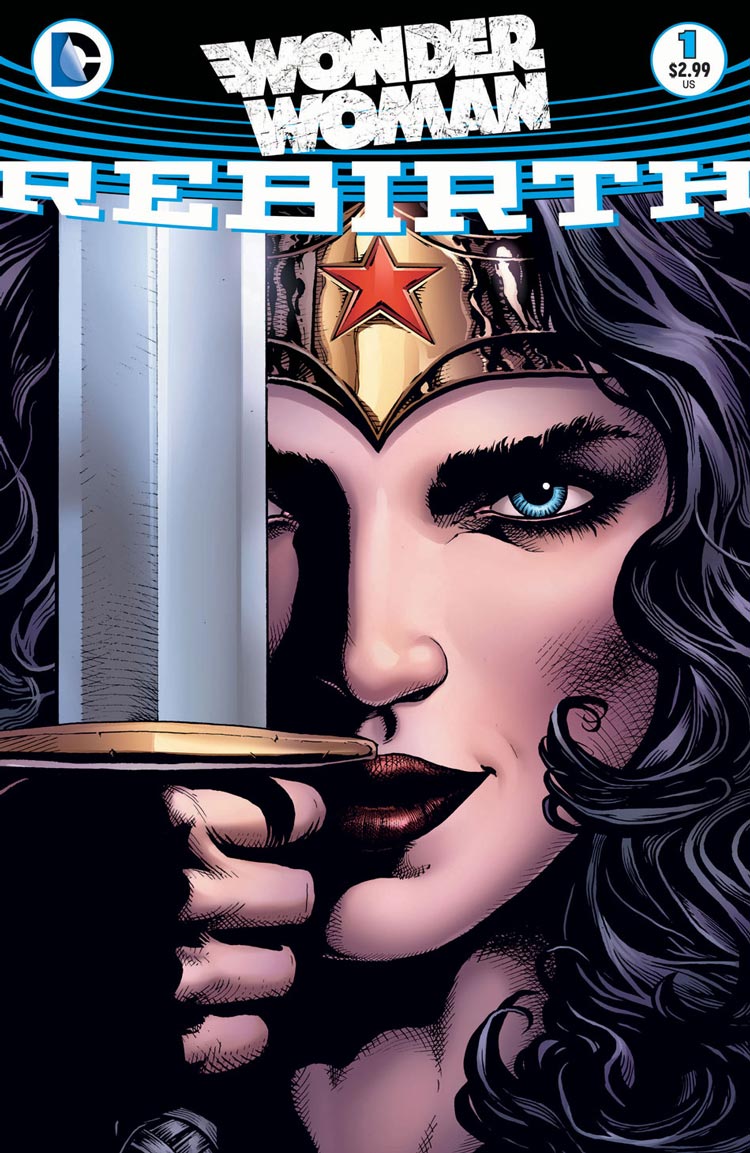 Matt Santori: Thank you ALL for taking time to chat about Wonder Woman. It’s a real thrill to have all three of you on at once.

I want to start off simply by asking each of you: who is your Diana? Is she a warrior? Super-hero? Ambassador? God? All of the above? None of the above?

Greg Rucka: All and none.

Nicola Scott: To me, she’s everybody’s friend. Her defining personality trait is that she’s quite possibly the most inclusive, compassionate, and calm person in the DC Universe. It’s hard for anyone to not feel a little ray of sun on you when she’s around.

GR: Yeah, I love that. I have nothing to add to that. I’ve always maintained that when Diana smiles at you, it’s the best thing that could have happened to you all day.

Liam Sharp: She’s like the archetype. She embodies what’s best in people. She has a wisdom born of ages and ages of experience, but she still has this youthful vitality. She communes with the gods, but she also has this pragmatism that comes along with science.

So, she really embodies such a gamut of what humanity is. 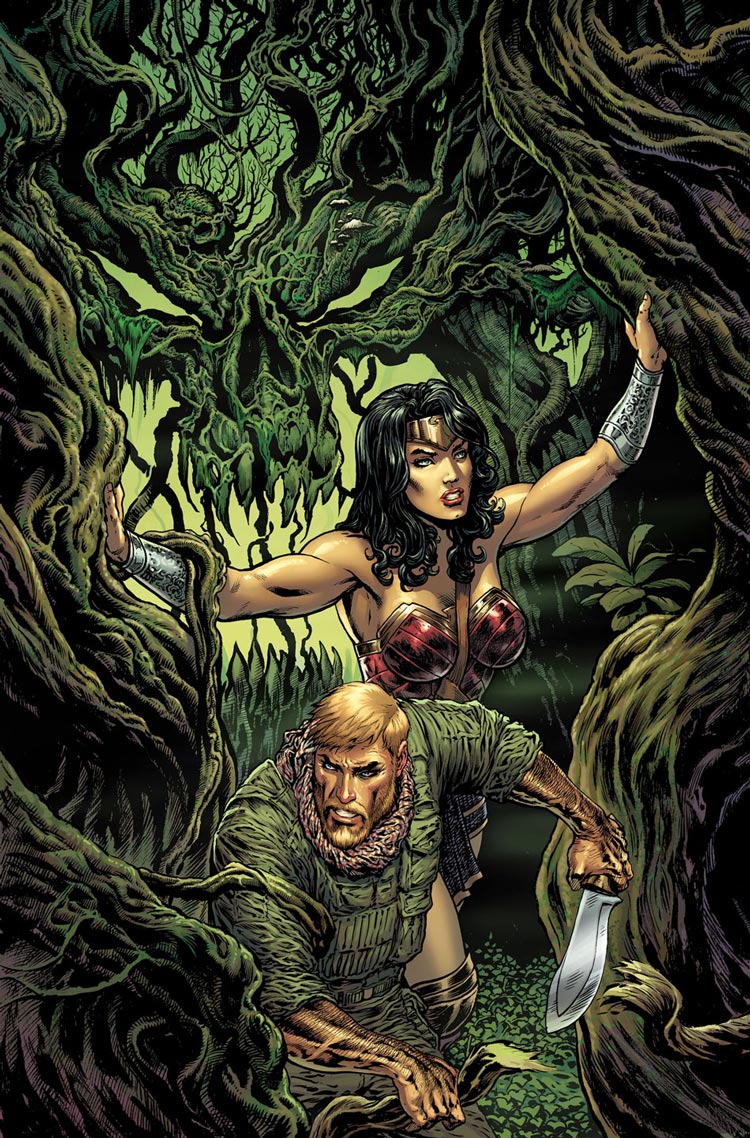 MSG: As this is a “rebirth” and not just another series relaunch, what is one thing that you are bringing into the series that you feel has been missing of late?

LS: I think what I’m bringing to it is an Old World European bent on the mythological aspect of the series. I’ve always loved that material, whether it was Greek, Roman, Nordic, or Celtic. I think a lot of comics have a sanitized representation of those kinds of stories. I’m sort of interested in the anthropological aspects of the mythologies — where everything intersects. I want to embed a richer, deeper, less well known look into it. All sorts of Easter eggs that you can relate to and rediscover.

I’m getting a bit Windsor-Smith on its ass. [laughs]

NS: I feel like with the “Year One” story, this is her first venture into the outside world, so we’re getting to play with Diana’s optimism and innocence. She’s living a very balanced, but reasonably sheltered, rich existence until now. And it gets turned on its head in one day.

Suddenly, there is a great, big, open door. And there are choices. And a sense of adventure. It’s a nice opportunity to work on that kind of story, because it’s Diana at her most raw, but shiny and good-to-go. She’s ready to experience what the world has. I feel like that’s a story we haven’t gotten with Diana for a really long time. 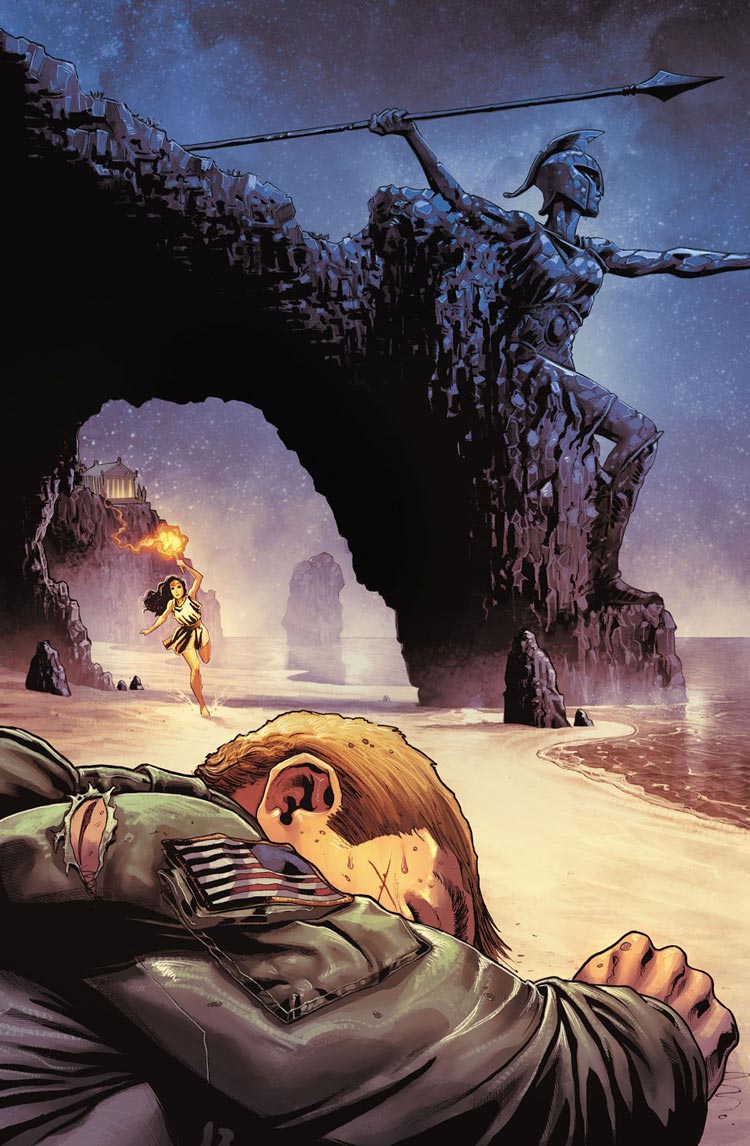 GR: Nicola talks about that optimism. I think one of the things that I’m really eager to explore with her further is not naivete, but certainly in “Year One” a genuine innocence. And how in “The Lies” that has tempered her as a woman.

We meet her at 18 in “Year One.” She’s 18, but she’s not 18. She’s lived through thousands of years of being 18. Then, we come to her later and this is a Diana who’s had the 10 most significant years of her life. And has been so profoundly affected by them. It’s changed who she is and molded her. 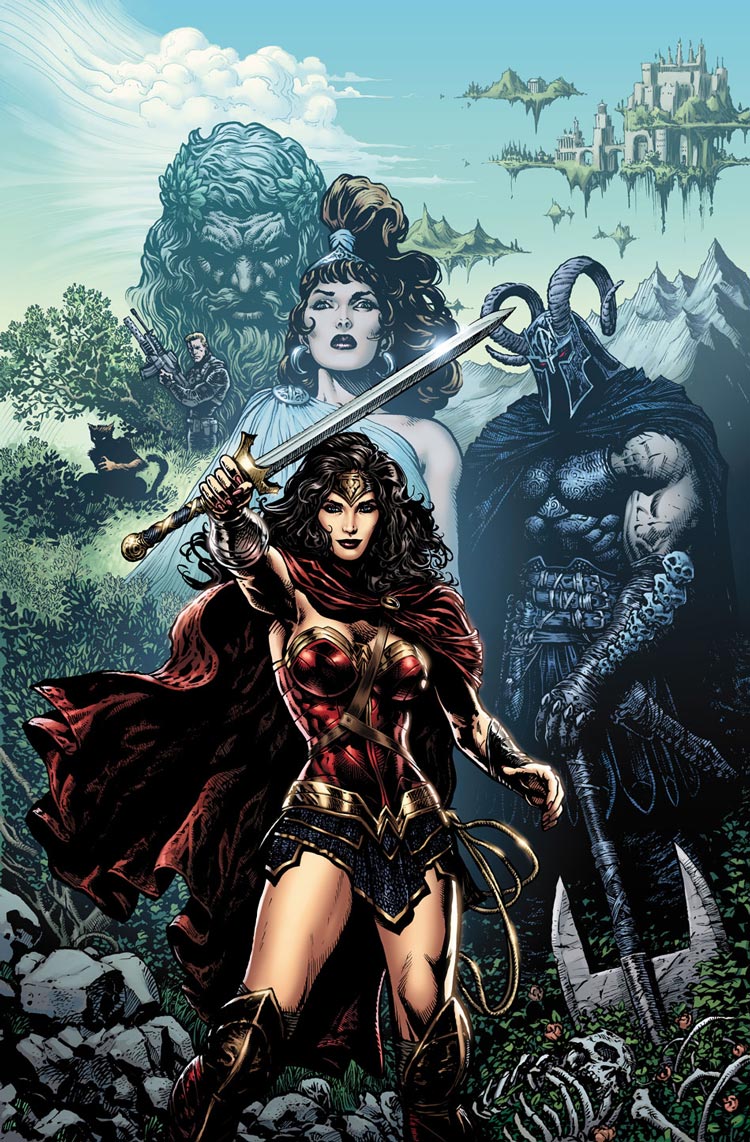 MSG: Central to Wonder Woman is always this idea of “Truth” with a capital T. How does that idea resonate for each of you going into this first set of storylines?

LS: It’s funny, because truth is an elusive quality. It rests entirely on perception. For greater part of our history, the earth was quite evidently flat. It was true to say it was flat.

In a weird way, the central theme of our story is this idea that the world is not flat after all, speaking metaphorically. What is reality and what is truth? She has a lot of those types of questions.

GR: And the difference between what is truth and what is fact. I think Diana is very good at discerning the truth, especially in people. 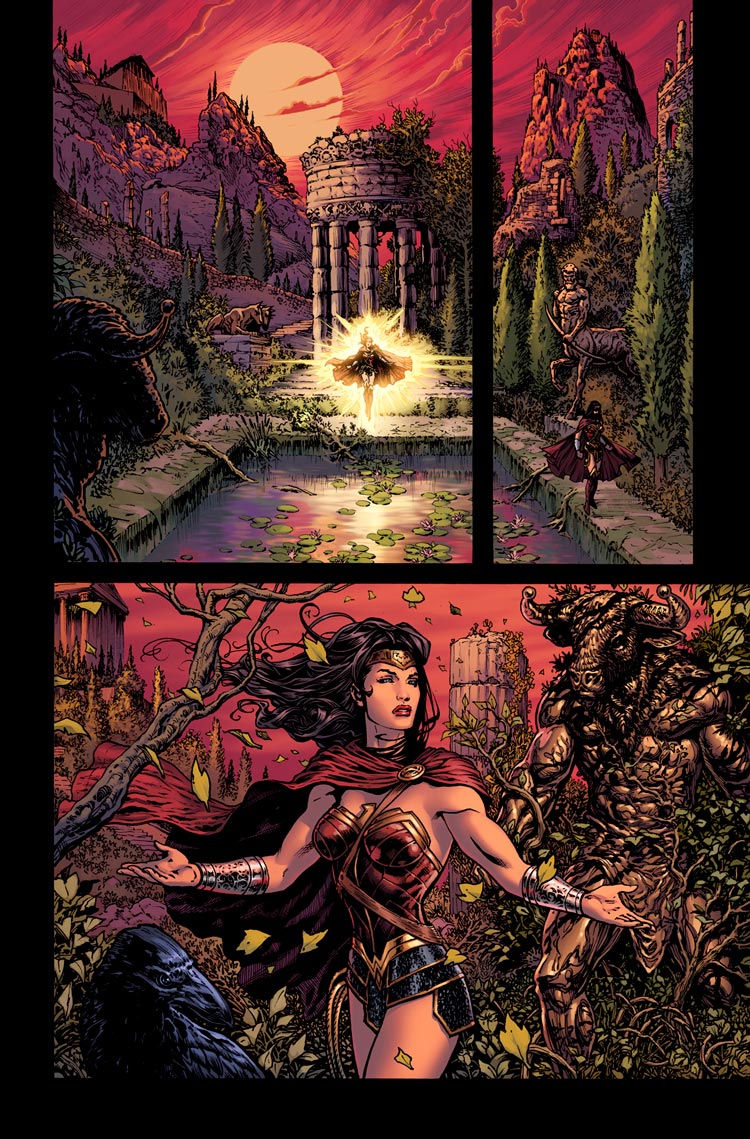 LS: I love that in your scripts, Greg, that you refer to the fact that other characters know this. It’s embedded in the world’s psyche. Everyone knows that she only tells the truth. That’s never questioned. And if you know that going into the story, it’s something you can really play off of.

I feel like one of the things that we’re doing with the story is challenging the truth. Diana’s truth and everyone else’s experience of the truth as we get to what is actually reality. 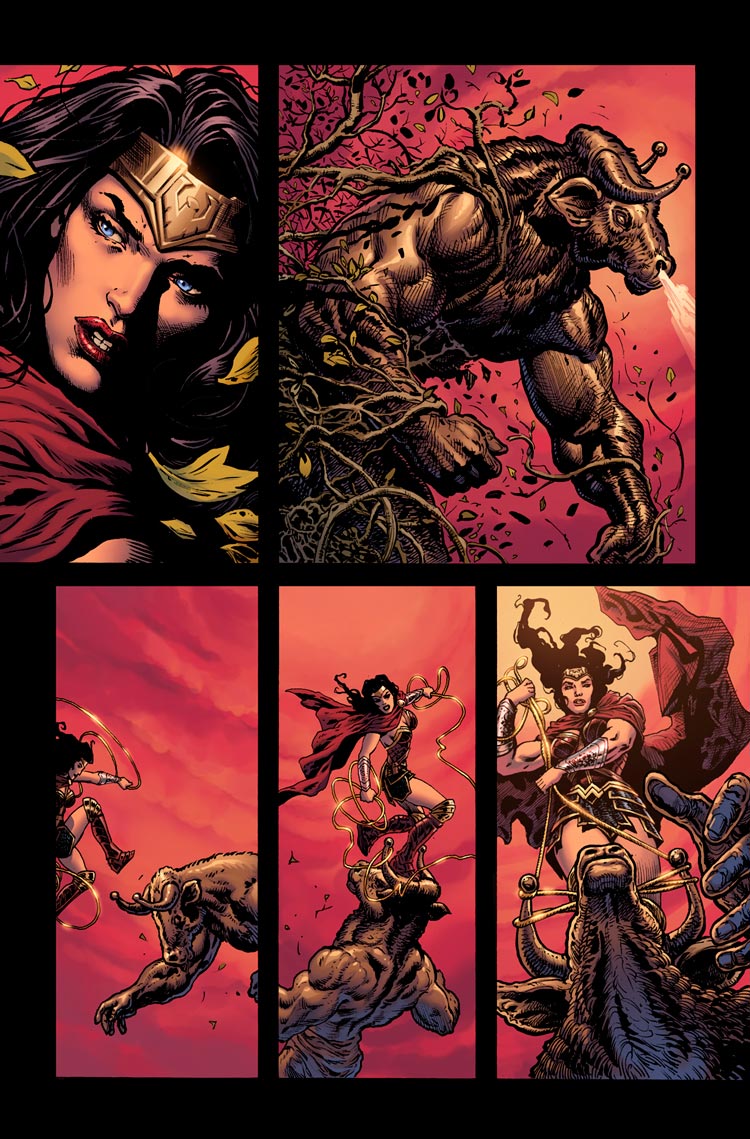 MSG: So, if there’s one thing going into Rebirth that you’re already surprised by or most proud of, what would that be?

NS: In the “Year One” story, certainly the first issue is playing a lot with culture. I feel like we’re seeing moments on Themyscira in particular where we’re getting a sense of culture. It’s not so much plot-driven in that first issue. It’s more like, here is what life is like. It’s denser and richer than we usually get to see, in really simple ways. I think that’s really lovely.

From my point of view, I know that I’m doing — hands down — the best art I’ve ever done for a mainstream title. That’s partly fueled by the fact that the character is so amazing. Way more amazing than I ever expected.

There’s so much richness to this book. I know that I could draw this book forever because there’s no end to what could happen here.

But more profoundly than that, what I’ve found as a whole on this book is that we are united in our views of the world and what we feel about it. I know how humane Greg and Nicola are as individuals and that shines incredibly powerfully for me. I feel like I’m involved in telling a story that’s morally aligned with myself. It means something. It has a gravity. I feel like I’m telling something important, even though it may be a fantastical comic book story.

It’s so great. So often when you get a job, you’re telling a story that might not have any sense of morality that I can relate to. You know… I’m a pussycat. [laughs] I’m sort of a pacifist hippie, and all my work has sort of been associated with this hyper-violence. I wonder if that would be my legacy. So it’s really beautiful to be associated with something I really care about. 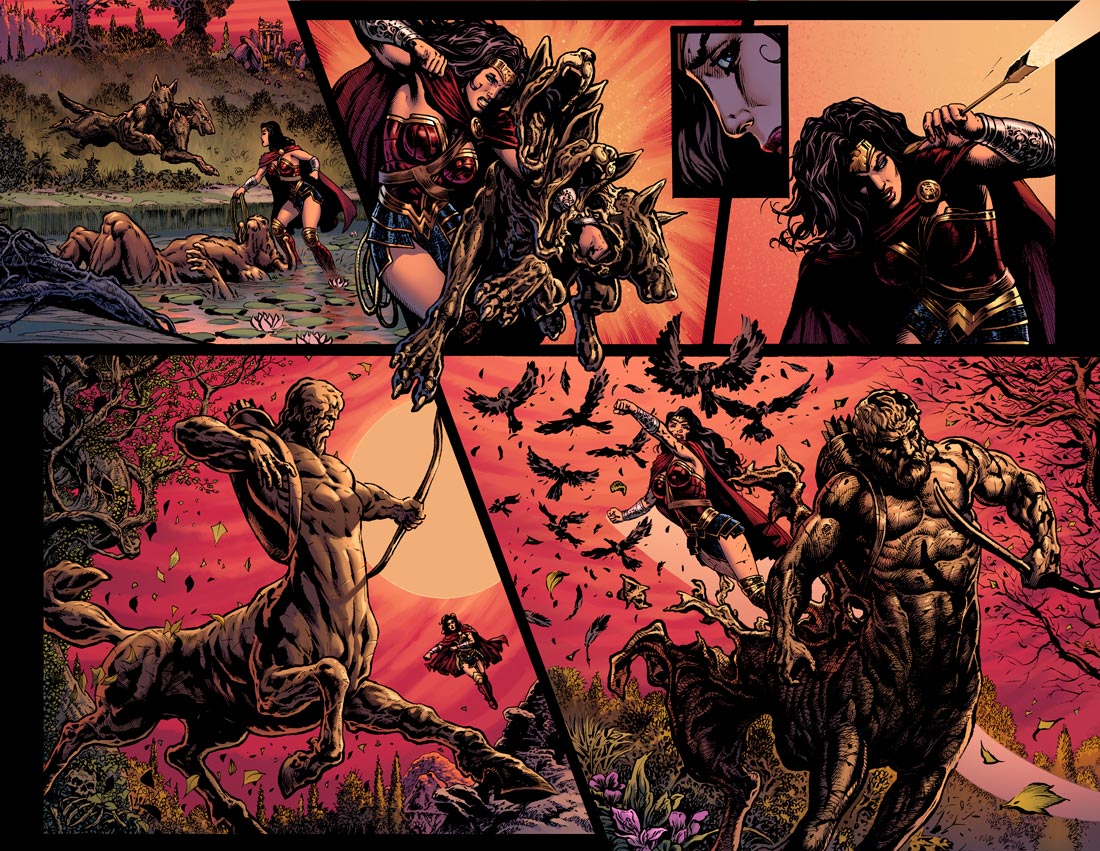 GR: I guess I’m going to be a little pedantic, because there’s no one moment that’s surprised me the most. I mean, when people see the last page of Wonder Woman #1, their jaws are going to hit the floor. And I know, because mine did. And I look at a panel Nicola did of Hippolyta and Diana hugging. It’s just sublime.

And the collaboration on every level here is so active and strong. I sit down and start writing an issue, and all the conversations we’ve had are changing the story. I started the latest script and all the stuff that’s in there wouldn’t have been without my discussions with Liam. They just wouldn’t have been there. I’m sitting down to work on another issue and I have my passel of notes from my last discussion with Nicola.

Half the problem is trying to cut down. How are we going to get everything into 20 pages? It’s just been wonderful. It’s really been such a fantastic collaboration on every level. I can’t speak highly enough of it. I really can’t. 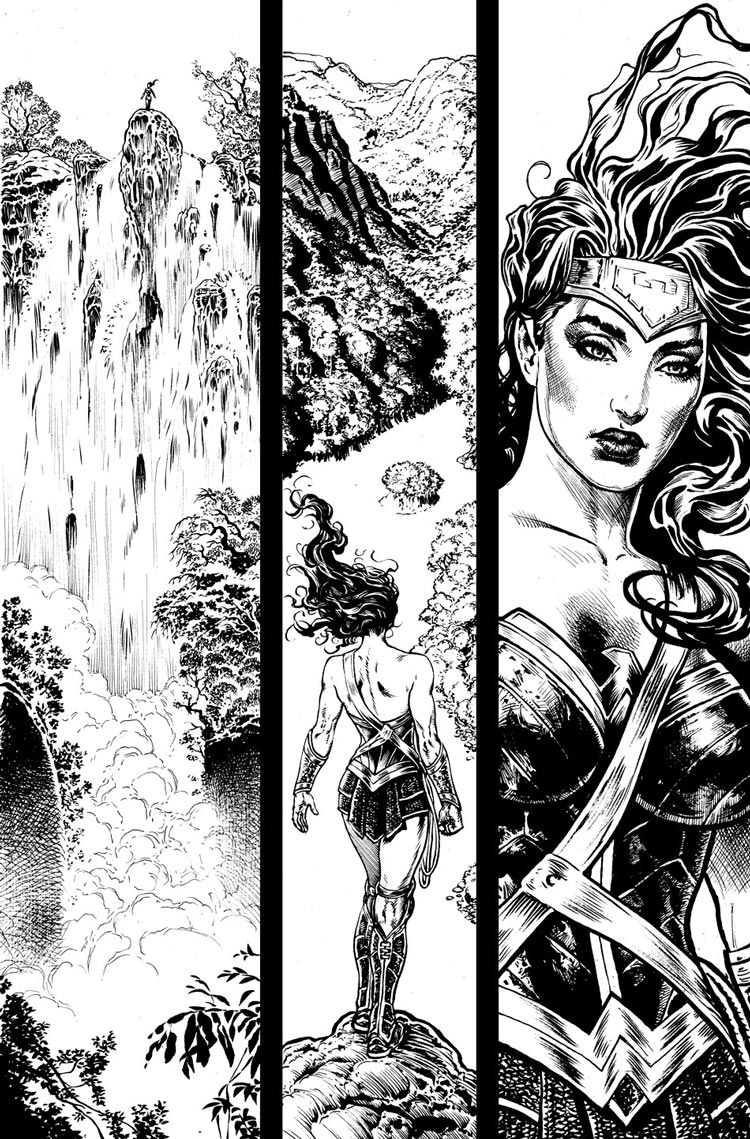 MSG: OK. One last thing. Lightning round with a one word answer: other than Diana, what character are you most looking forward to working with?

MSG: This was the stumper question? [laughs]

NS: OK, well, I feel like for the “Year One” story, it’s Steve. He plays a big part. His story is as important as Diana’s.

LS: I don’t want to say who I would say because it will spoil things. What I will say is way down the line, it’s my kind of thing, and don’t expect it any time soon, but we have an idea for Ares that you’ve never seen before. I’m looking forward to one day hopefully begin to explore that.

We’ve joked among the three of us that we’re going to make someone out there in the world go into a comic store on Wednesday and pick up an issue of Wonder Woman and say, “Oh cool! Steve Trevor is in this one.” I’m not sure those are words anyone has ever said aloud. That’s what we’re going for.

For more on DC Rebirth, check out our interview with writers Scott Snyder and Tom King on Batman: Rebirth #1.