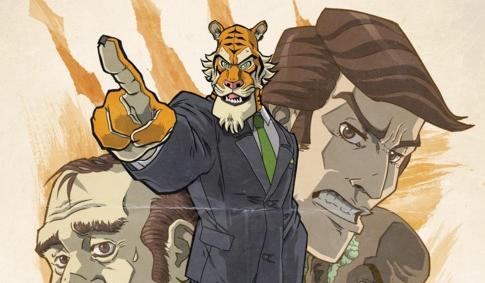 He’s a tiger, he’s a lawyer! He’s Tiger Lawyer! Ryan Ferrier has unleashed a new breed of comic on the world with Tiger Lawyer #1, self-published through his Challenger Comics imprint. Tiger Lawyer #1 tells two stories of this unique individual and includes several pin-ups of the Tiger in action. Creator and writer Ryan Ferrier took time out of his schedule to tell us what Tiger Lawyer is, where he came from, and where you can get this truly unique book!

Aaron Long: I have to start by asking a question I can’t get out of my mind: where did Tiger Lawyer come from? 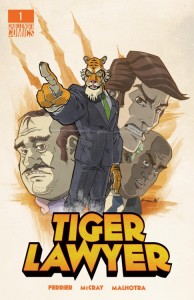 Ryan Ferrier: You know, I’m not entirely sure. It all happened really quickly, from the time I had the idea to the time I had the first short written. I think it was just one of those things that just popped into my head (as they often do). This was last December, and I remember tweeting something silly about a Tiger Lawyer being my next comic. With some encouragement from a couple of followers and friends, I sat down the next night or so and wrote the first short, now called ‘Attorney at Rawr’, in just a couple of hours. I then posted the script online, never intending at all to do anything with it. A couple people dug it and chuckled. Then a few days later I got a tweet from Matt McCray, an incredibly talented and accomplished artist, who had done a little sketch of his take on the Tiger. It was really at that moment I thought, ‘you know what, this could be fun, I’m going to try this out’, and put the feelers out there for an artist to do the full eight page script. I hadn’t a clue what I was going to do with it when it was done.

A couple of weeks passed, and had no bites on the gig, until Matt messaged me back offering to do it. I was happy to take him up on it, and from there it evolved into the book we have now. That’s the long version… the short version? I have no clue. Just some random brain fizzle.

AL: Tiger Lawyer #1 is made up of two separate smaller stories. Will the series continue to follow that format?

RF: That’s the plan for now. At least for the second issue, which is as far ahead as I’m thinking at this moment. Originally I wasn’t going to do a second story for the first issue, it was just going to be Matt’s short and a bunch of pin-ups from different artists. I thought it would be a little slim for a single print issue, so I wrote the second story, ‘Dead Cat Walking’, and approached Vic Malhotra to do the art. That second story is quite different from Matt’s, as it’s a more gritty, noir take on the character, it plays it more serious where the first story is light and fun, and frankly, silly. Vic joined the project, which is just awesome, and the book really took shape. To me, Tiger Lawyer has always been this experiment; working with different artists and tones and themes and styles. I’d like to keep it like that, definitely with short stories, and try out a few more things and keep it interesting, and most importantly, fun. At the same time though, I’d love to pitch the book as an ongoing or mini, in that noir style. 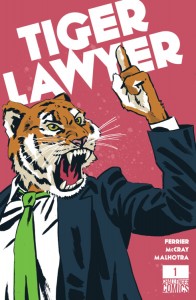 AL: The humans in Tiger Lawyer seem unfazed by him. Are there other walking, talking, professional animals in the world of Tiger Lawyer?

RF: I think one of the “rules” of Tiger Lawyer is that he’s never really going to be acknowledged as this anthropomorphic animal, or at least, no one will really make a big deal about it. He’s just kind of there, and he’s a damn fine defense lawyer more than anything. Originally I wanted Tiger to be the only non-human character, but I’ve been thinking about introducing some other characters into the mix. I know Matt had some great concepts for other legal animals. I’m still shaping the next two stories, and can’t quite tell for sure yet. I know one of the next ones won’t have any more animals.

AL: Can you discuss how you got the pin-up artists and primary story artists involved with the book?

RF: I shamelessly emailed, tweeted, and facebooked the heck out of it. Most of the pin-ups are from artists I messaged through twitter, as I try to be pretty active on there and meet other creators. It was pretty overwhelming, the number of people interested in contributing, and everyone seemed to have fun with the character. And the pin-ups look fantastic, if I may say. I even received some pieces from artists I didn’t contact, who just did one and sent it over, which was amazing. I actually had too many pin-ups, I realized when making the print version, so unfortunately I had to cut a few; those will all be available either in the second issue of Tiger Lawyer, or in the digital version. As for the story artists, I believe I covered Matt’s involvement in my earlier rambling, and with Vic, we first made contact about it over twitter and I proceeded to pitch it to him.

AL: Where will readers be able to get their hands on Tiger Lawyer #1?

RF: Excellent question! Readers will be able to buy Tiger Lawyer #1 online through a store I’ve set up on the official blog. There’s a link to purchase at tigerlawyercomic.com. There’s a few options, you can buy the print issue (which comes as a snazzy, old-school flip-book style with two front covers), the digital copy (a hi-res pdf file, readable on most devices, I believe), or a combo pack with comes with both. I’m also looking into getting the issue into some app stores, but I can’t be certain on that right this second. I’ll do my best to get copies into some stores as well, but that might be a couple months out (self-publishing is a lot of work…).

I’m also doing a few cons this year, where I’ll take the book. The big debut of the first issue will be at the Vancouver FanExpo and the Calgary Comic & Entertainment Expo, on the weekends of the 21st and 27th of April, respectively. This will really be the first time anyone can get their hands on it. I haven’t finalized the other cons, but I’m doing my best to hit the big ones this year. I’ve got two other titles hitting print this month, Terminals (from Penny-Farthing Press) and The Brothers James (from 215 Ink), so it’s a crazy, crazy time for me, but I’m thrilled and excited to get some comics out there.

AL: Any final words for Comicosity’s readers regarding Tiger Lawyer?

Tiger Lawyer #1 is on sale now! Check out tigerlawyercomic.com for more information.