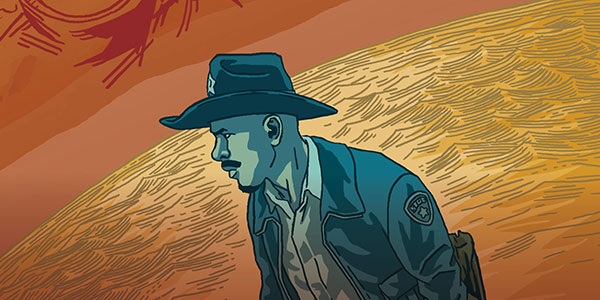 Get ready to have your mind blown. Ryan K. Lindsay is ready to invade your Headspace, with co-conspirators Eric Zawadzki, Chris Peterson & Marissa Louise, in a way you’ve never been invaded before.  The digital-first Monkeybrain title storms into the digital realm tomorrow, March 5, and Lindsay was kind enough to delve into the world of Headspace with Comicosity.

Aaron Long: Let’s start at the beginning…how did Headspace come to be at Monkeybrain? Have you been working on the title for awhile? 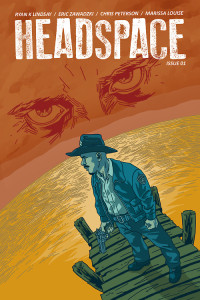 Ryan K. Lindsay: It all started with an idea – people placed into some sort of jail inside the body/brain of another – and then the idea hit Eric Zawadzki and from there we wrangled the narrative and asked the hard questions and HEADSPACE came out the other side. It seriously took months, leagues of email threads, and supreme passion for us to build this work of which we are so proud. This ride started in late 2012.

Then we came into the Monkeybrain view scope because I flew across to ECCC in Seattle last year and pitched the book with Eric. We were lucky enough to have Christopher Sebela introduce us to Chris Roberson and the slippery slope paved with awesome led us to this point.

AL: What can you tell us about the world of Headspace?

RKL: It opens with Carpenter Cove, a strange town whose inhabitants don’t know how or why they got there and so they drudge through a clouded existence that holds little purpose they can find or understand. Then, events transpire to show the sheriff, Shane Garratty, that this town is really in the mind of a killer, Max Johnston, and he needs to get out.

From this set up, we take Shane on a wild ride through the memories and fears of this killer as he tries to figure out the keys to survival and escape.

We also follow just as dangerous a path in the real world as Max unlocks some mammoth secrets of his own. 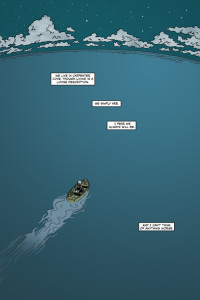 AL: In Headspace we are introduced to Shane, a man who lives in this complex world. Who is Shane, and can you discuss his role in Headspace?

RKL: Shane is a law man. He’s a father. He’s a man who lost everything, including the will to live, but now he desperately what’s even the very little he’s got left waiting for him in the real world.

In Carpenter cove, he’s the sheriff and while he doesn’t know why, or how this came to be, he knows he had to adhere to this role. He had to ensure the peace is kept. And I can say we know how and why this has happened and we will answer all of this as the story unfolds. Everything means something, everything has an answer.

AL: You are working with artists Eric Zawadzki & Chris Peterson on Headspace. Can you discuss their roles in the storytelling? What has it been like to see this come together as their pages have come in?

RKL: Oh, these guys are just so damn good. The dual art teams serve the dual layers of reality at play. Eric brings to life the Cove, in all it’s dank and depressing and gonzo glory, while Chris illustrates the real world, with beautiful colours from Marissa Louise.

I feel like I’m spoiled and my karma will drastically suffer for hogging all the best art teams. Both teams create this world I get lost in and their storytelling is each sublime. And the ride only gets a better view, I promise you that.

AL: Any final words for Comicosity readers regarding Headspace?

RKL: It’s available on ComiXology for 99c this Wednesday and is open for preorder right now. The first issue is 22 pages with back matter so if you’re down with mind bending pulp around a firm character arc at the core, I know this book is for you. And if you do try it, and you dig it, make sure you tell the team what you liked at the tumblr: headspacecomic.tumblr.com – or hit us up on twitter, I’m @ryanklindsay Eric is @ericxyz Chris is @vsrobots and Marissa is @marissadraws and they each deserve some praise, lord knows I give them enough.