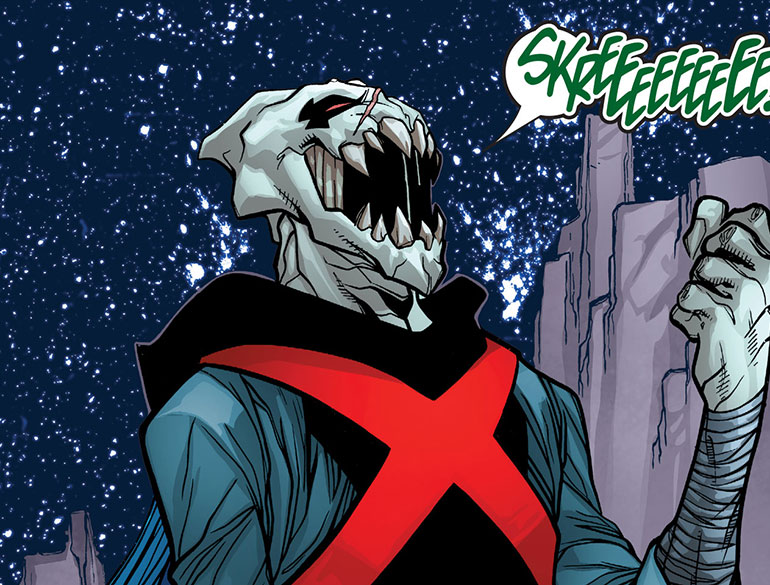 With this week’s Green Lanterns #24, we get the finale of Simon and Jessica’s training on Mogo, but that’s not all. In the second of seven reveals of the original Green Lanterns — the Guardians’ very first picks to wield the emerald rings — we meet the Stranger, Z’Kran Z’Rann of Mars. And here to tell us all about the newest addition to a very old lore, Humphries tells us a bit about how the past year has influenced his take on Jessica Cruz and Simon Baz, as well as how these seven GLs could very well be a prehistoric version of the Justice League themselves. 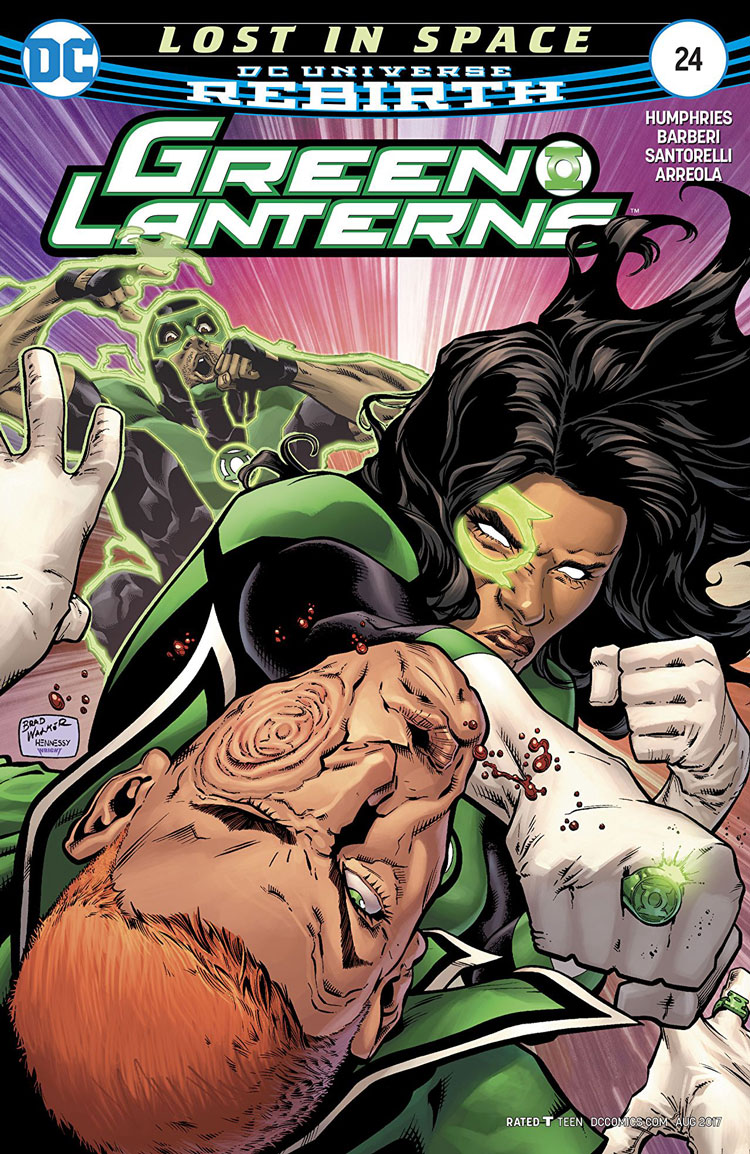 Matt Santori: One year later now after the book’s debut in Rebirth, how has your perspective on Simon and Jessica as a team evolved over time?

Sam Humphries: That’s a great question. And I’ve been thinking about that a lot, because the one year anniversary issue is coming up with issue #25. I’ve chosen to reflect a little bit through Simon’s eyes in that issue.

My perspective on Simon and Jessica has changed quite a bit. Honestly, if you had asked me at the beginning where they would be twenty-five issues later, I probably would have given you an answer that bared a resemblance to where they were at issue #6. They way that they have evolved as individual characters is really pleasantly surprising, and the way that they’ve evolved as a partnership has pleasantly surprised me.

I thought that the core of this book was going to be that they don’t get along. But actually, I think the book has gotten stronger the more that their partnership has gotten stronger. I feel like the readers have been right along with that every step of the way, which has been incredibly rewarding.

MS: Yeah, the reader response — especially to Jessica’s character — has been really fantastic. I see so many people talking about how inspirational she is.

SH: There’s so much that went into Jessica and particularly her relationship to anxiety, which I really focus in on right off the bat. I also have problems with anxiety and thought that this would be something I could really bring a personal experience to, and a unique voice. I’m not the only person writing that has anxiety, but I feel like I’ve never seen it addressed to this extent in super-hero comics. 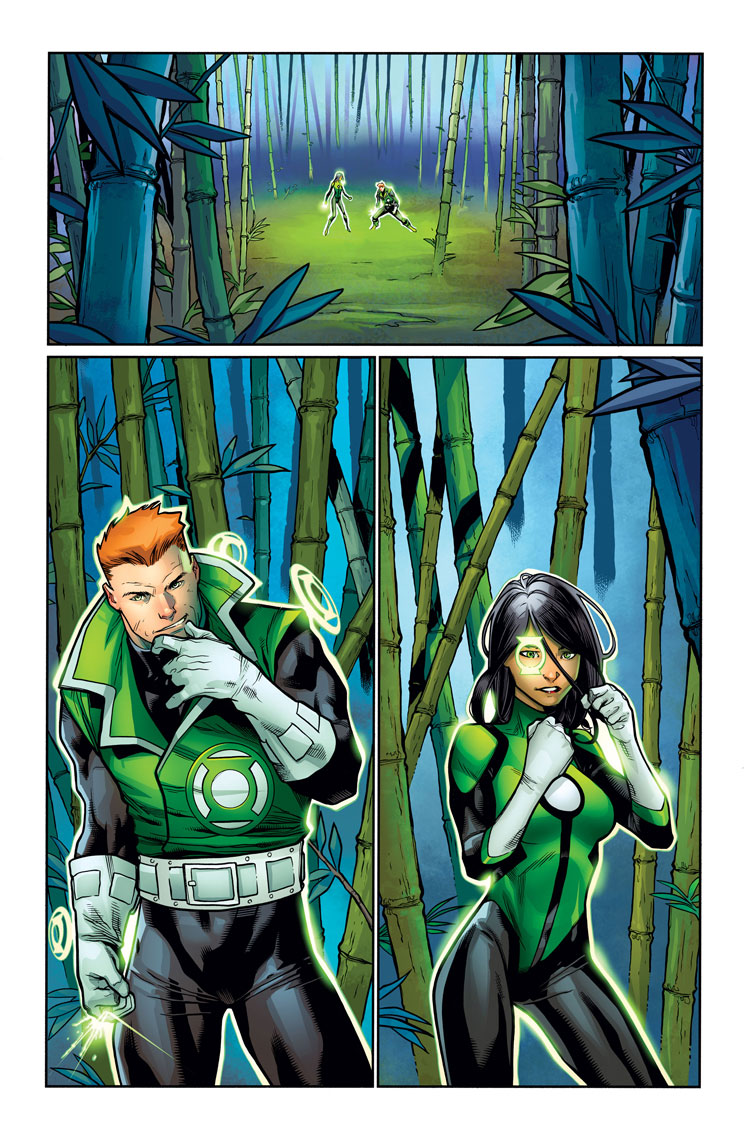 I hoped that if I put something personal into it, people would respond. And the reaction has been really gratifying. People who are out there with their own experience with anxiety have written to me and tweeted at me to say how much Jessica means to them. Relating to Jessica has helped them with their own struggles, and have decided to change their lives. I don’t want to share any personal stories, but it’s just been really affecting and touching for me as a writer to see how people really relate to Jessica — and own her as a character. That’s just a huge compliment for any creator to get.

MS: You see that playing out in this current storyline with her training with Guy Gardner on Mogo, while Simon trains with Kyle Rayner. Why was now the time for them to go through this formal process?

SH: We had a really great split between the Green Lantern books that I was really excited about, and I know Rob [Venditti] was, too. The Hal Jordan book was out in space doing the space stuff, and the Green Lanterns book was more grounded on Earth, and more focused on the interplay between the two characters.

I didn’t want the books to be redundant. I wanted there to be a really smart, meaningful reason to have two books. If you were a Green Lantern fan, you would have at least a choice of two different stories.

That said, I’m a huge Green Lantern fan, and I wanted to write the characters! I wanted to do Guy and Kilowog and Kyle and John and Hal and a ton more that we didn’t get to pack into these three issues. So, I felt like the time was right behind the scenes, because both books have been around for almost a year and have had a chance to stand out and establish who they are. Now it was safe to start to bring the casts together without worrying about the books feeling redundant. 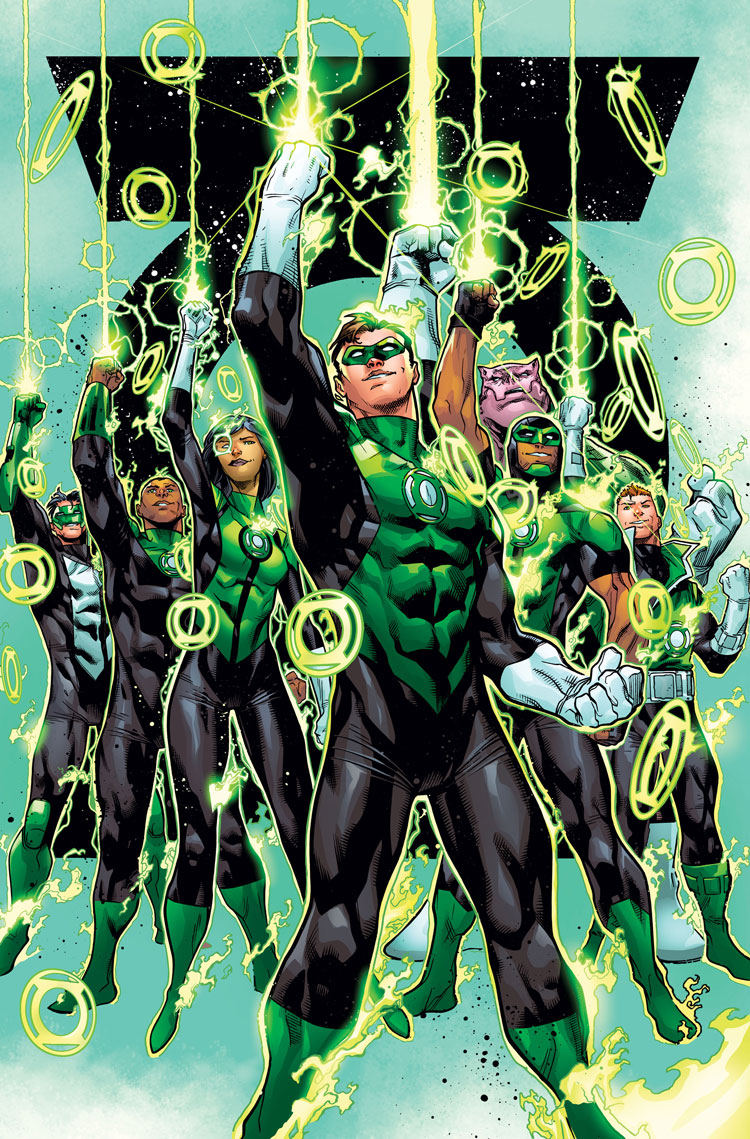 MS: We’ve already seen the beginning reveal of this story you’re telling about the original Green Lanterns — including the first of the seven, Alitha. Before we get into the second new GL, I’d like if you could give readers a sense of where we are so far with the story of Volthoom and the Travel Lantern.

SH: What we know so far is that we’ve connected the dots on Volthoom. Volthoom is a character that was named all the way back in the Silver Age. Geoff Johns brought him into the forefront with “The Rise of the Third Army” and “The War of the First Lantern.” It felt like, when I was rereading them — because Geoff left so soon afterward — that there was a lot of unexplored territory with Volthoom, particularly when it came to his origin.

We’ve seen that Volthoom comes from a doomed planet. He’s the last survivor of his own planet, from a whole other Earth in the DC Multiverse. He and his mother had developed a Travel Lantern, a device that could travel through time, space, and the entire Multiverse. He’d been going from place to place in the Multiverse, trying to find a way to save his doomed planet. He then met up with the Guardians of the Universe as we know them 10 billion years ago, before there were any power rings. As a result, Volthoom was extremely instrumental in not just creating the first Lantern, but in creating the first GREEN Lanterns.

For me, that was a really exciting story to explore and tell. Even though it takes place 10 billion years ago, there’s so much resonance for today. It really is history you get to see from a different point of view, like reading about the early days of Walt Disney or start-ups. You’re seeing people take big risks and have huge ambitions in the face of uncertainty and defeat. They’re following their dreams and guts, and making decisions that have huge impacts on the world or universe as we know it. 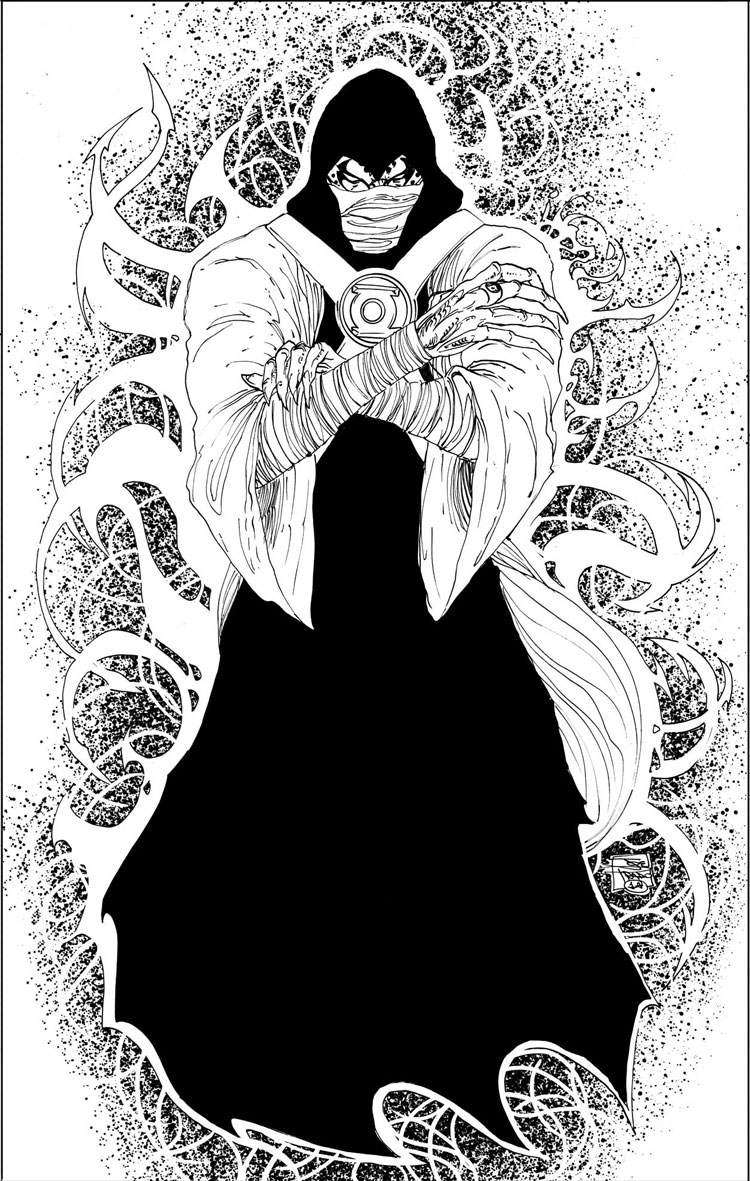 MS: We’re going to meet the second of the original Green Lanterns in this week’s issue: Z’Kran Z’Rann, also known as The Stranger. Tell me about the character, how he evolved in your mind, and why a White Martian?

We knew that we wanted to take alien elements from the DC Universe of today and bring them together in a way that gives them a twist, or a remix of something that you don’t quite expect.

The Z’Kran character comes from Mars. He is a White Martian. These are things we’re all familiar with in the DC Universe. But I wanted to give him something that would make him stand out from what we know about White Martians. To do that, I gave him that a bit of “Batman remix.” When he was young, his entire village was massacred by a bunch of vagabonds. It set Z’Kran on this path to become someone who could overcome great fear. And we all know that the ability to overcome great fear is the #1 prerequisite for becoming a Green Lantern — today or 10 billion years ago.

SH: We worked with Joe Prado on the design. Joe is an old hand in the Green Lantern legacy, having designed all the characters for Blackest Night. He was a natural choice for these seven characters who we will be doing a huge storyline with — and have great plans for. When you want really striking, visually impressive character design, Joe Prado is the man.

MS: And then you’re working with Carlo Barberi on issue #24. How has that process been for you?

SH: Carlo is a relative newcomer to the Green Lanterns title, but we’re really lucky to have him. He’s done amazing work throughout the DC Universe. He brings a sharp, dynamic vibe to these pages. And when I saw him draw Z’Kran Z’Rann for the first time, I immediately wanted to steal Carlo away and make him do a 12-issue Z’Kran Z’Rann solo maxi-series. 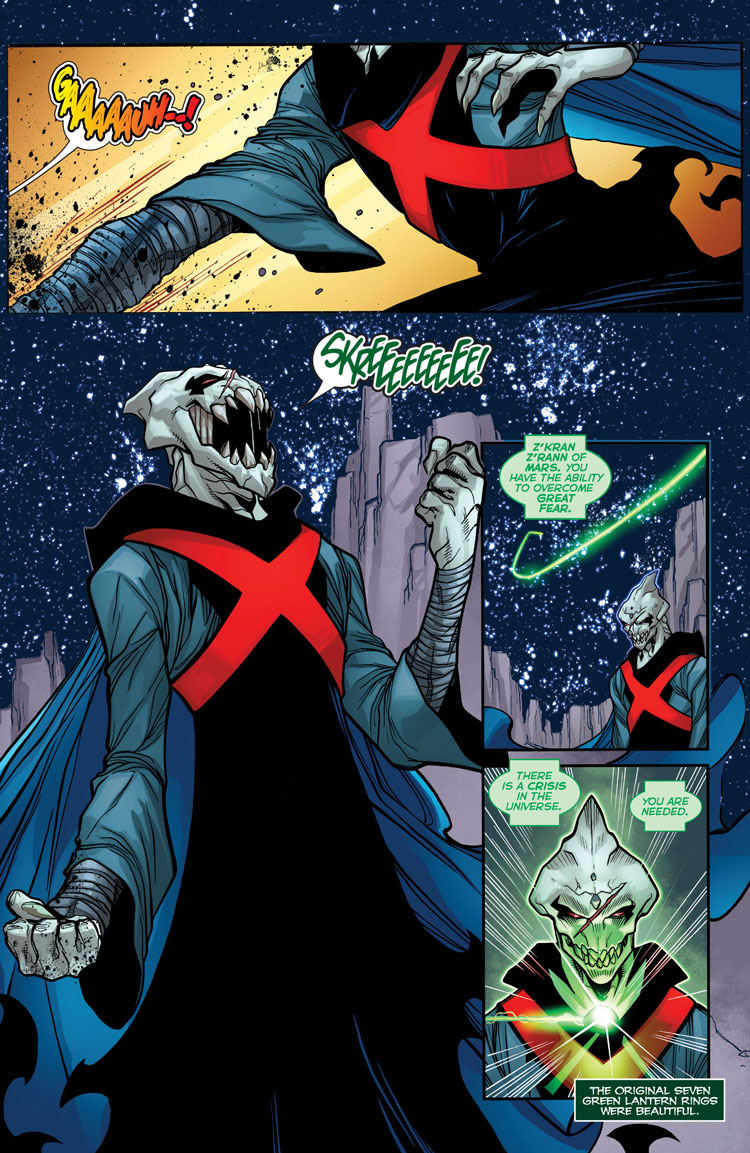 MS: It’s really interesting to me too, because I’m assuming 10 billion years is a whole lot of years before the destruction of Mars. There’s a lot of fertile territory in terms of culture and history.

The first Green Lantern we revealed was Alitha, who’s not from the Fourth World [like Mr. Miracle or Darkseid]. She’s from the Third World. There are more characters coming from places in the DC Universe whose names will be very familiar, but the way they were 10 billion years ago will be very surprising, even to the most hardcore DC reader.