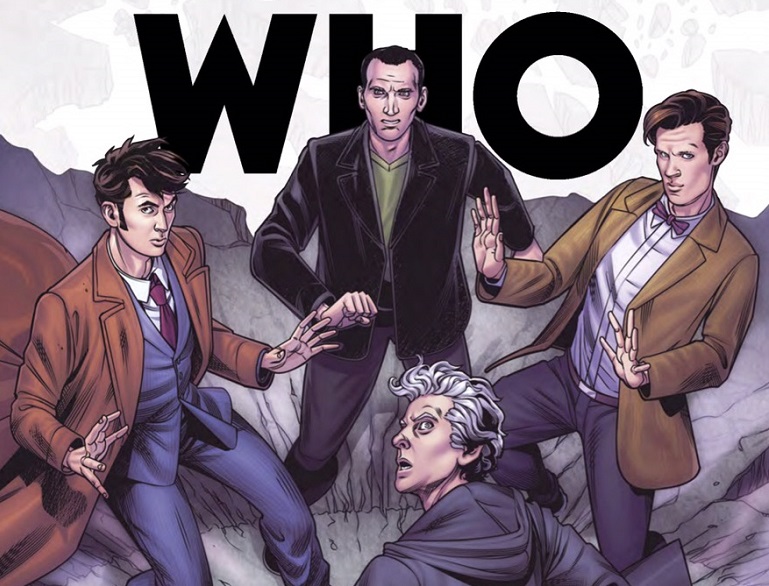 Do you miss Bill Potts? Captain Jack Harkness? The Tenth Doctor? Perhaps you’re already weeping about the loss of Peter Capaldi’s Twelfth Doctor (no you cannot have my tissues, I need them.) if so, then Titan Comics has had the answer for you these last few years with their Doctor Who comic book line. Once again, the publisher is brining fans a New Who Doctors crossover, DOCTOR WHO: THE LOST DIMENSION.

We got a chance to talk to the writing team of Cavan Scott, George Mann and Nick Abadzis about Alpha, the issue that launches this crossover. 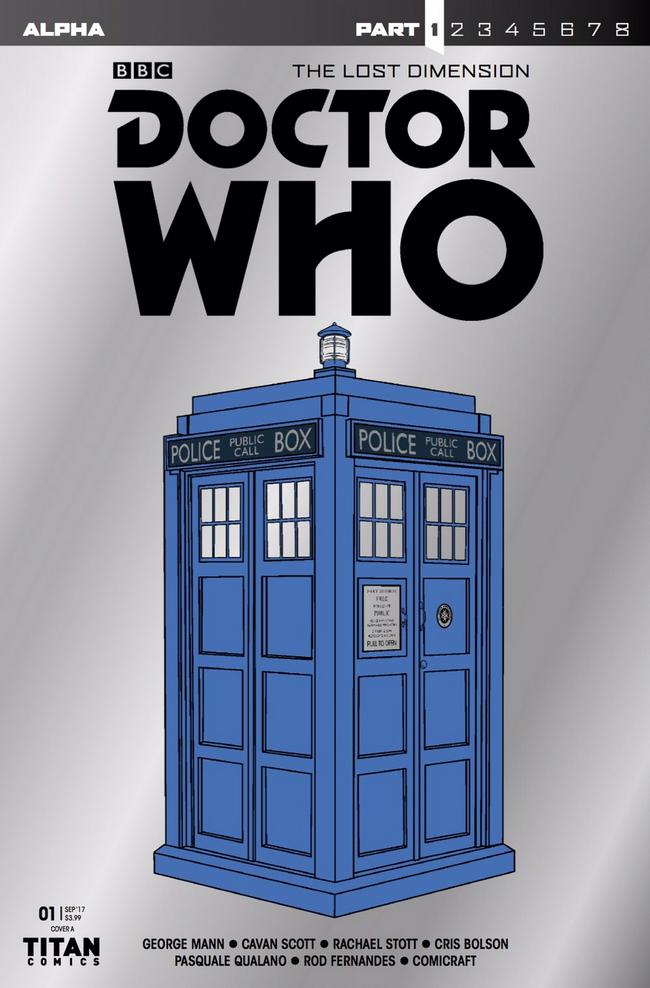 Cavan Scott: This is the void mentioned in Rise of the Cybermen, the space between universes. As the Doctor himself calls it, a ‘no place, the silent realm, the lost dimension.’ You can pretty much dive in without any prior knowledge, as it’ll all be explained in the issues.

We don’t learn about the creation of the void as such, but what happens when it changes, gaining a form of sentience.

George Mann: As Cav says, we don’t really explore the creation of the Void, but the fact it’s been there all along, outside of our universe. So, aside from our universe, what *else* is lurking in that strange nether-space? And what could it possibly want?

Nick Abadzis: The void is a blank page. It’s always been there, waiting to be filled! Which is what we writers do…

JB: There is an offbeat whimsy to the idea of giving oblivion or nothingness sentience. Are there a lot of challenges of … for lack of a better phrasing, “making something out of nothing?”

CS: It was certainly something we talked about a lot. There have been mentions of the Void creeping into the Titan Who comics for a while, stretching way back to Fractures in Robbie’s early Twelfth Doctor comics. Then there’s all the fun Nick has had with his gaggle of gods hiding in the Void in the Tenth Doctor, plus the Ninth Doctor’s recent decision to dump a particularly big problem into the void as if its a pan-dimensional garbage disposer. Again, its not essential to know any of these references, but long-time comics readers will be able to pick up on them.

GM: We went around the houses on this quite a bit, discussing what form the Void entity might take, and we finally settled on an answer that we felt gives us a real opportunity to explore the idea, and to link it all back to DW and the core DW mythology, too. Hopefully readers will like it!

NA: Comics creators, cartoonists, writers… we’re always making something out of nothing, or at least, building on the structures of what other creators left, riffing new shapes from their ideas. The Void is a bit of Doctor Who lore that’s been around for a long time now, and there’s a joy in putting our own new twists on it. The Void is a big place, it exists between all universes, it’s a non-place where the multiverse is physical. Lot of storytelling potential there! 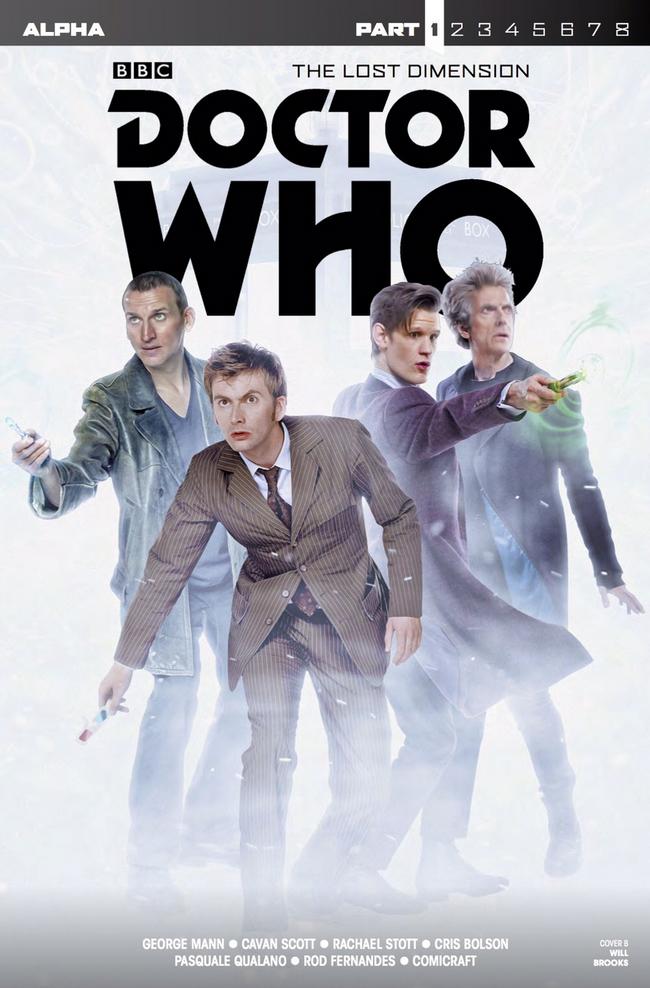 JB: How much communication is there between the creative teams of each book? Is this a collaborative effort between all the writers and artists for each chapter of the story, or more divide and conquer?

CS: Definitely not divide and conquer! After throwing around the initial ideas we all agreed on the way it would be broken up. George and I would write the Alpha and Omega issues, while I took care of the Ninth Doctor’s special, Nick would them come in to write the Tenth and Eleventh Doctor’s instalments, and George the Twelfth.

GM: Yeah, it’s been a real collaborative exercise, with all of us, plus our editor, Andrew, kicking about ideas, working out how best to tell the story, how to frame it etc. It’s essentially one big story told over a number of episodes.

NA: As Cav says, at the beginning, we all contributed ideas to the broad strokes of the story, then broke it down into chunks so we knew which bits we’d each be writing. It’s been fun for me working with Cav and George. I’ve known their work for years; longtime fan of both, so it’s a laugh to help create a whole Doctor Who story with them and to be welcomed into an already-established writing partnership. I’m honored to be a part of it. It’s great to get the plot breakdowns from different issues and share stuff back and forth. You learn from good collaborators, it’s enriching, and they’re both very generous, very creative writers with loads of ideas. (I hope I make them laugh with my doodles, which are a vital part of my own writing process.)

JB: The whole creative team for the Alpha issue, which launches the crossover, are “old hats” at writing and drawing Doctor Who books and comics. Do you ever still have moments where you fan-out about your job creating Doctor Who stories?

CS: All. The. Time. I’ve been writing Who since the year 2000 and I still have moments where I sit there and think: ‘Am I really being allowed to do this? It’s especially true when writing stories like The Lost Dimension where you’re writing Doctors meeting face to face. I have to sit down and have a nice cup of tea! Sometimes even a biscuit.

GM: Oh, absolutely! It’s never less than a thrill to write the word ‘TARDIS’, or to spend your days dreaming up new adventures for the Doctor and his companions, new characters for them to meet, new antagonists for them to face. I still worry that one day I’m going to wake up!

NA: I hope you mean that we’re “old hands” rather than “old hats,” trusted creative hands with fresh new ideas! Although I do have a very nice old straw thing that is reminiscent of the fifth Doctor’s preferred headgear. What can say? I love writing Doctor Who. It never gets old. It’s very demanding, because it eats ideas and always keeps you on your creative toes, but that’s good as it stretches you as a storyteller, keeps you evolving. Sometimes you catch yourself thinking, “Haha, I just wrote VWORP VWOORP!” It’s just completely amazing to work on something you love, to contribute a little bit to such a rich and ongoing mythology.

Doctor Who: The Lost Dimension – Alpha is available today at your local comic book store for $3.99.

The Void has always existed: No Place. The Silent Realm. The Lost Dimension.

But the Void is no longer empty. The Void is hungry.

Its devouring our universe – through time and space!

Now, every Doctor must play his part to save…everything! 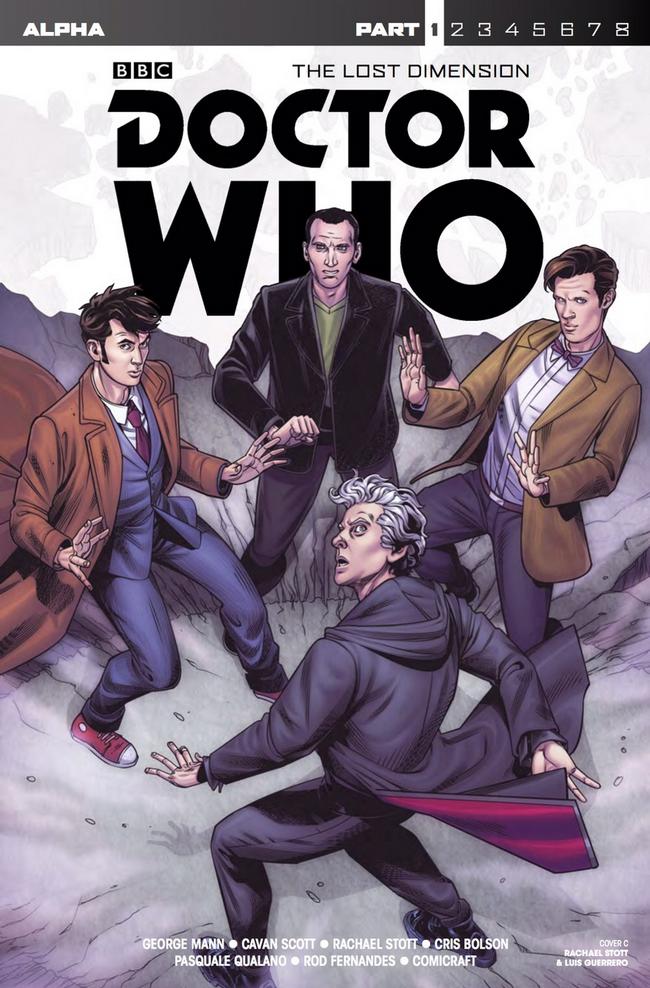 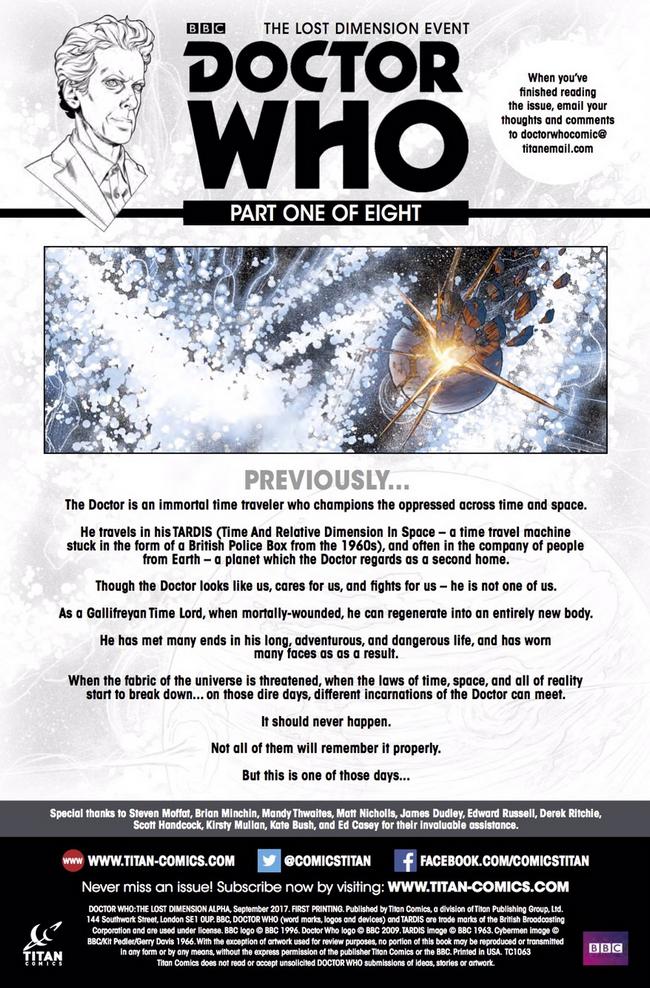 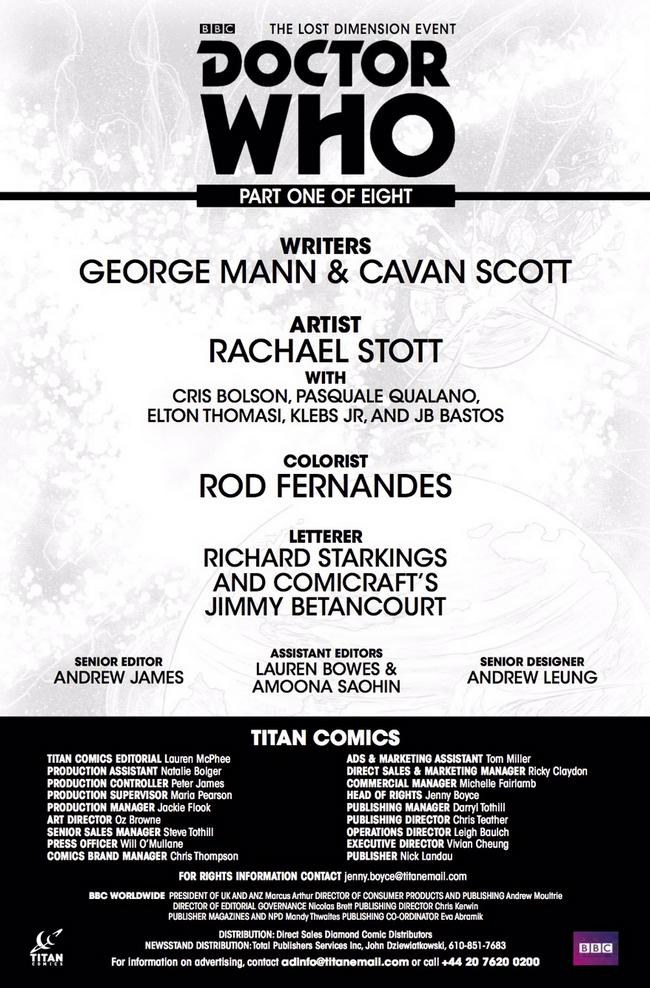 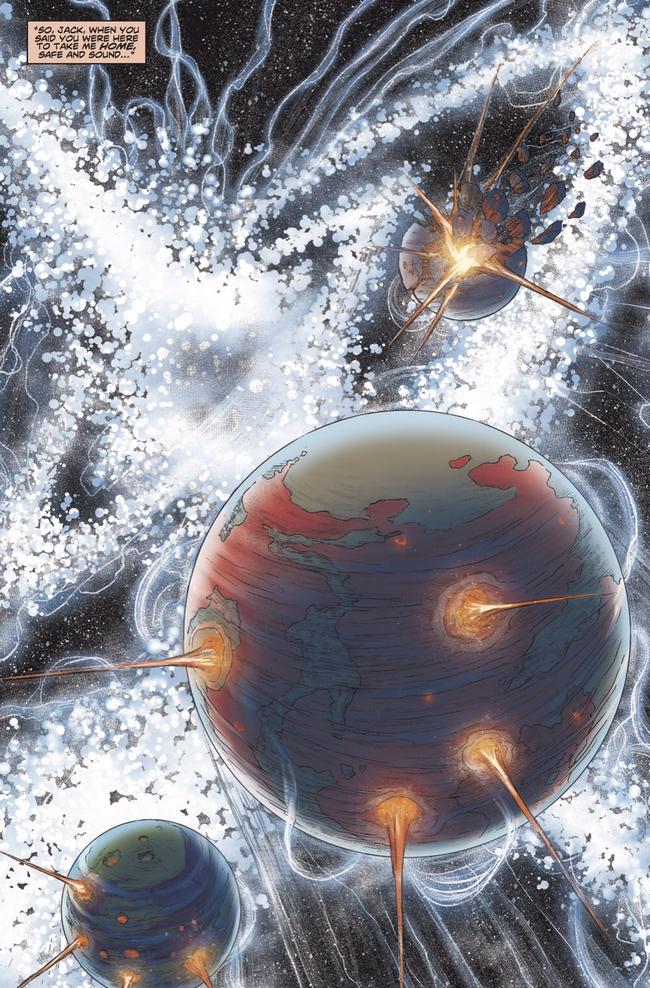 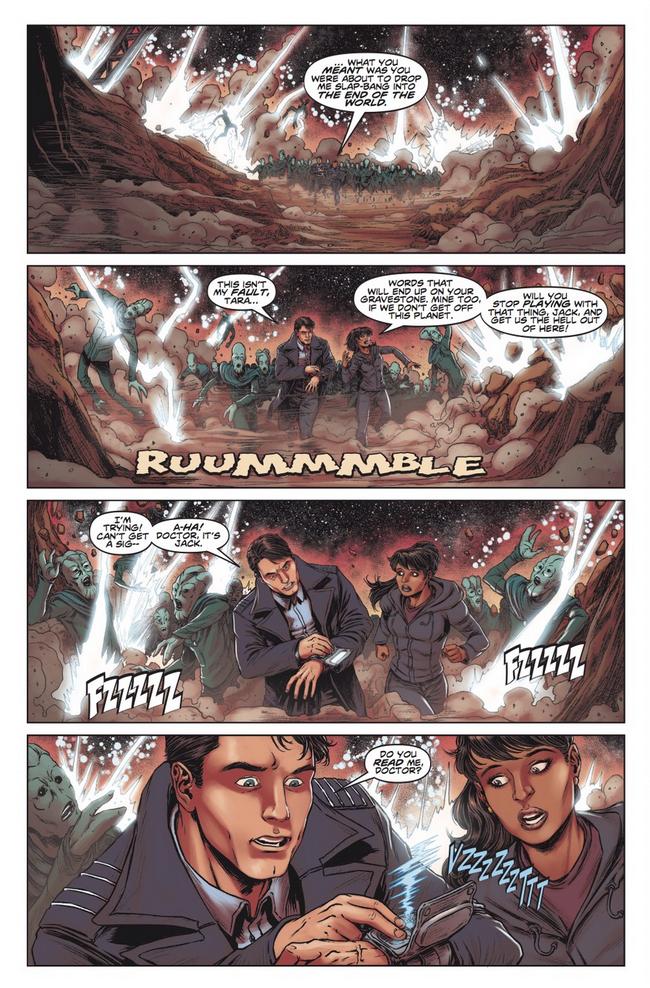 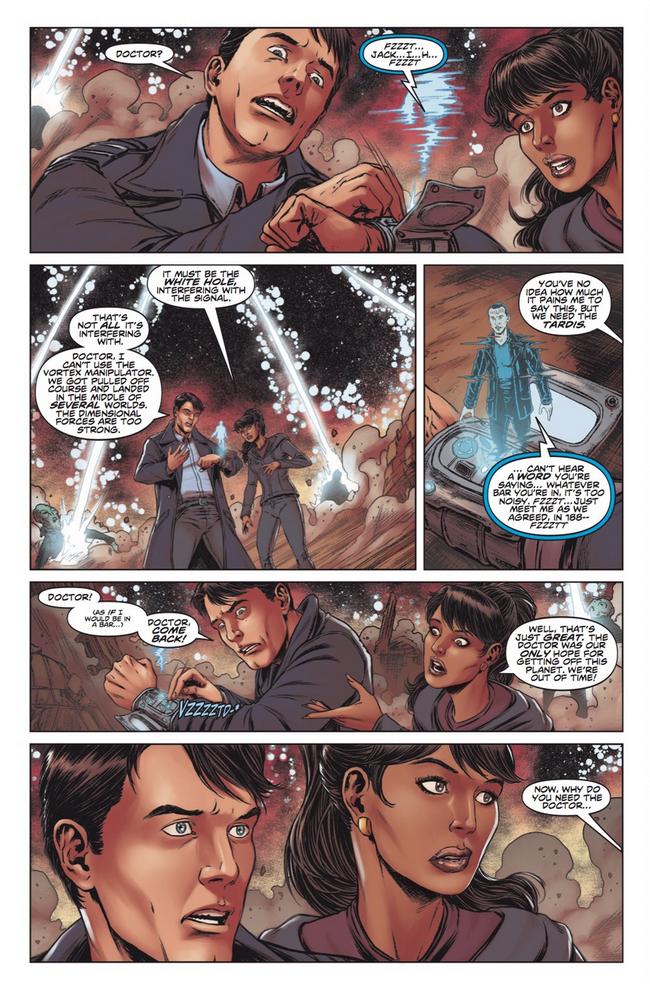 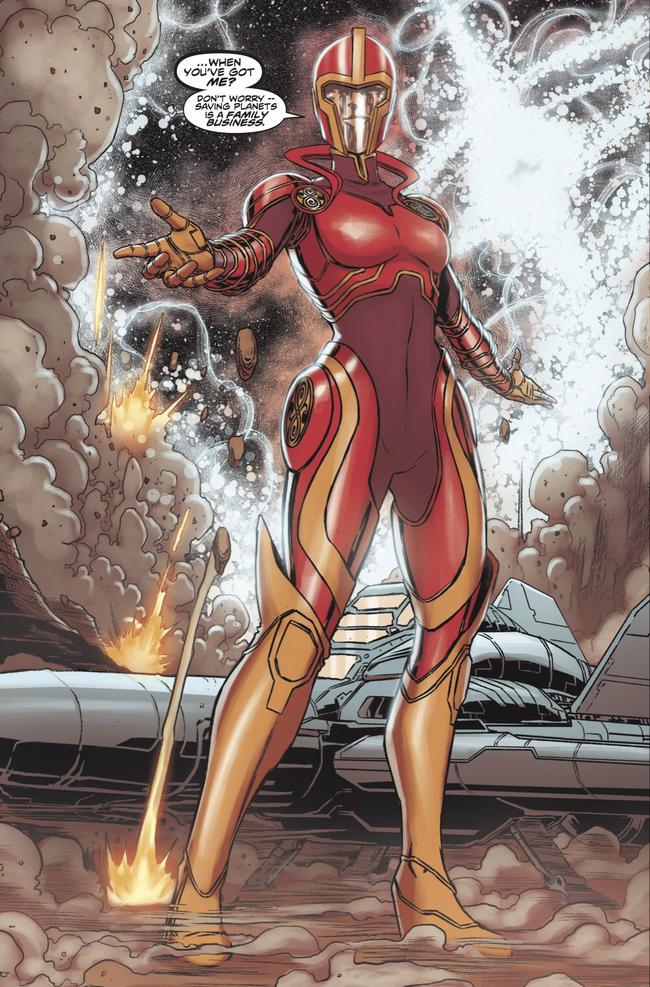 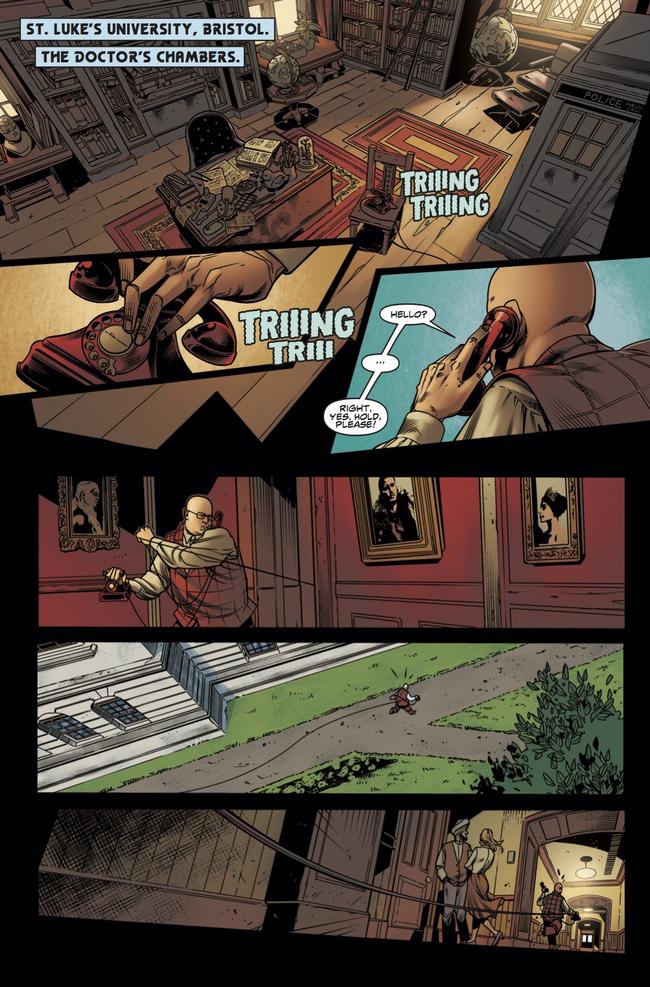 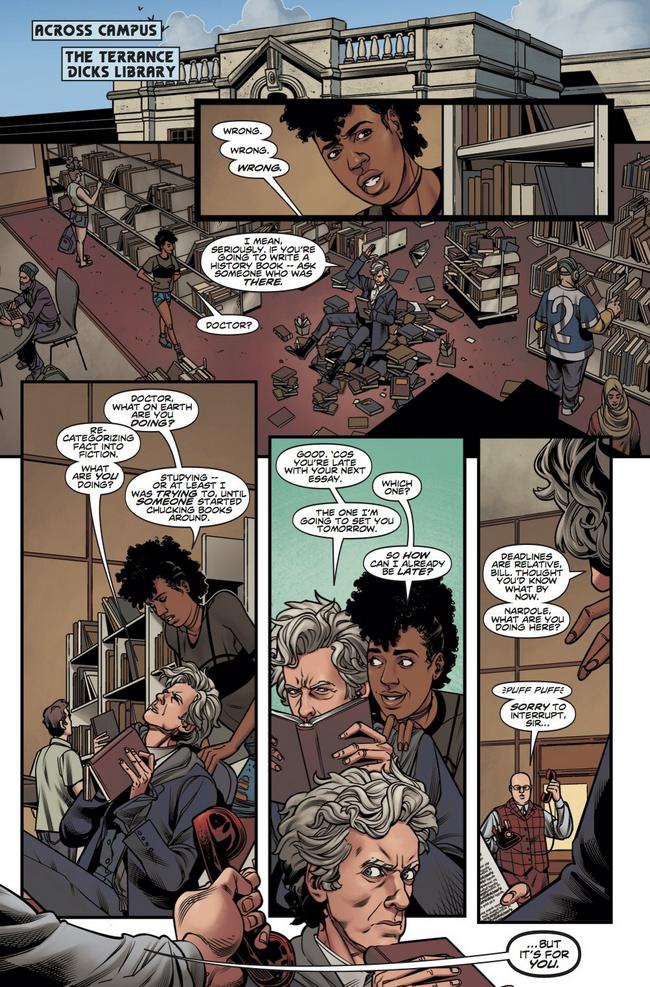