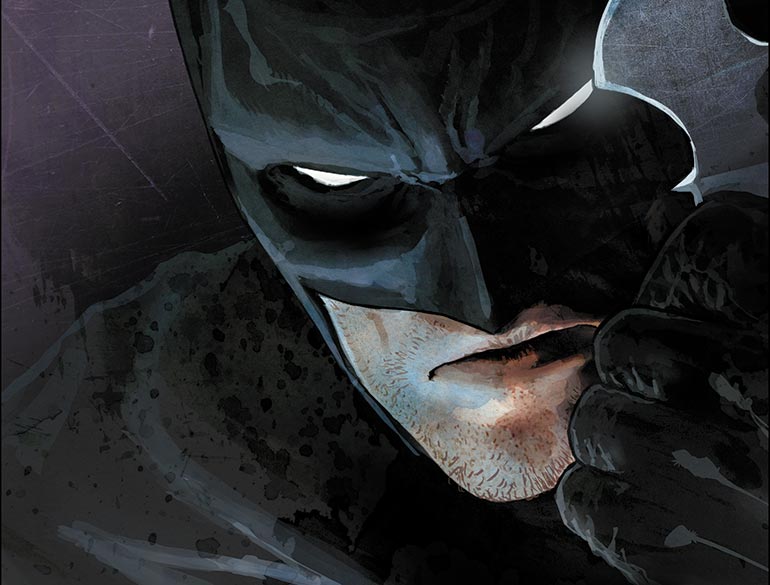 If super-hero comics are about anything, they’re about renewal and cycles of rebirth. I mean, just days after seeing “The Last Batman Interview with Scott Snyder and Greg Capullo” — capping off a glourious five-year run on the title — we’re right back where we started with Snyder talking about Batman: Rebirth #1. Only this time, he’s got a new partner-in-crimefighting at his side.

Tom King is no stranger to Gotham City or its dark knight denizens, having helmed Grayson and last year’s Robin War event. But now, the dynamic duo sat down to talk about the new adventure of taking on the Batman title proper, passing the reins from one head writer to another, and just what King and Snyder have in store long term in BOTH their ongoing titles! 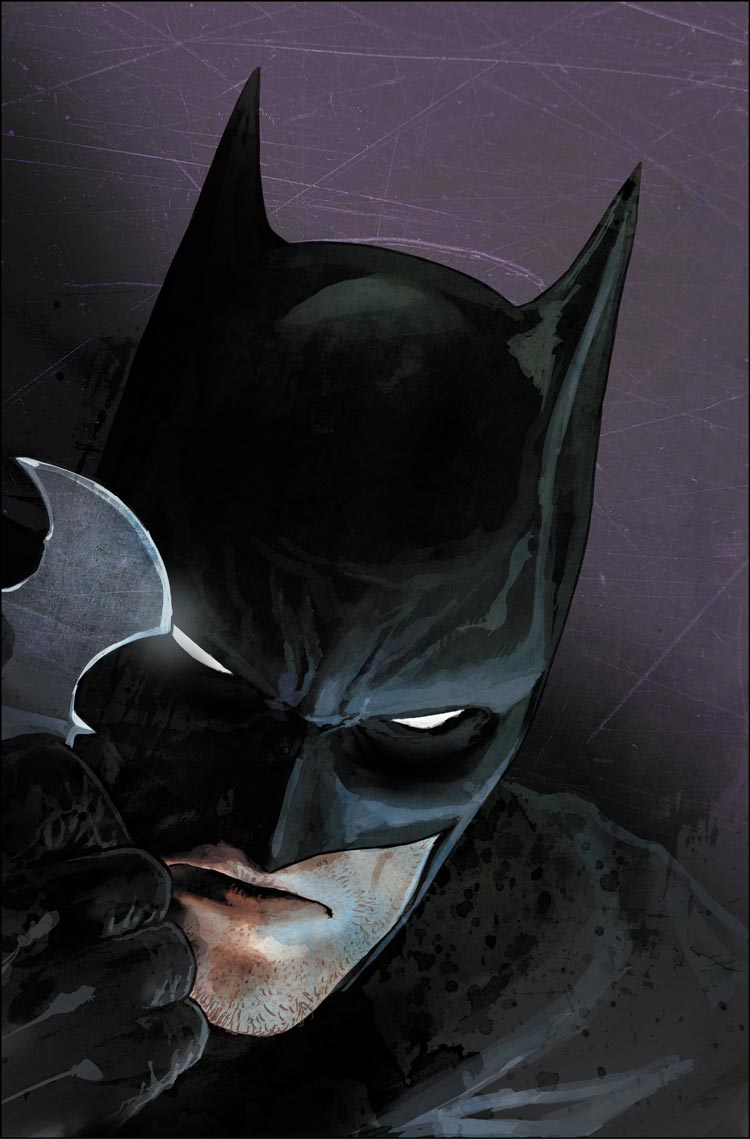 Matt Santori: The two of you are working on Batman: Rebirth #1 together. How does that feel for each of you — Scott, to be handing the masthead book over to Tom, and Tom, to be picking it up?

No, the thing is, Tom and I had become really good friends before we ever knew there would be a “Rebirth.” Before there was going to be a renumbering and all of that stuff, I starting sharing things and going back and forth with Tom, the better part of a year ago when I was writing #43 or #44. When they started talking about bringing someone else on to do Detective or Batman proper, I was extremely excited by the prospect of Tom. He was 100% my number one choice from the beginning.

So, leaving a character you feel like you’ve spent so much time with is hard — even though I’m going over to do it all over again in another title. I always feel like the Batman series itself is the place the big ideas start to branch out from. Tom is literally the best writer in comics right now. I’m so proud to be handing the torch over to him. I’m so inspired by what he’s going to do with Batman and what he does in his other books.

I know it sounds like BS PR, but it’s really the truth, so everyone out there reading is going to have to just deal with it. [laughs] To be able to hand a book over to someone who’s basically the best writer in comics and is also a terrific friend feels great. And I can tell everyone out there that Batman could not be in better hands. I’m so proud to be working alongside Tom and the group of writers coming on the titles.

Tom King: This is great! [laughs]

You know, on one level, it’s super frightening. Because he’s a character that isn’t broken. When you take on a series like Omega Men, where there’s nothing there but an old series that was kind of broken already, you have something to build on. These toys are exactly where they need to be. You don’t need to fix them. I don’t need to fix Batman.

The book is as good as its ever been. And its been like that for five years as Scott wrote it, and before that when Grant Morrison wrote it too. It’s been on a great run. I just need to try to be inspired by that great run and keep it at the incredible level where they’ve left it. 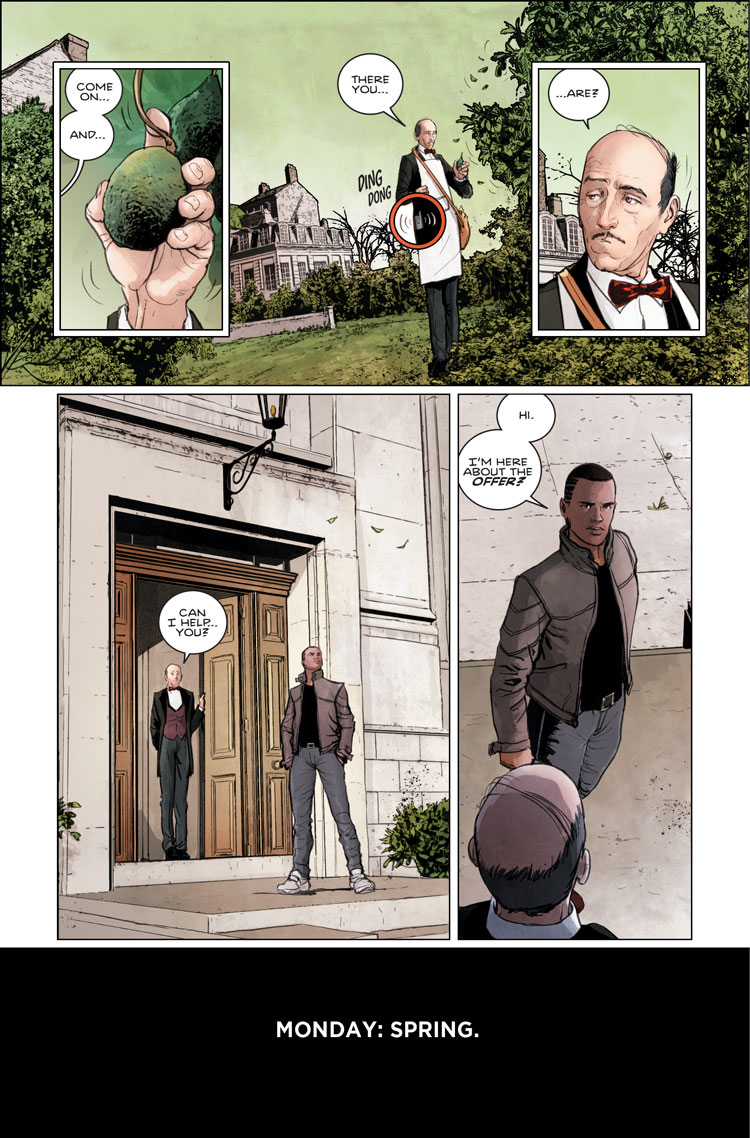 MSG: So, Batman’s not broken, of course. But with this first issue, what’s different already? Because it wouldn’t be a Rebirth without something new…

SS: Well, there literally are new elements in it from word go. The way we tried to hand the book over to Tom, Mikel, and David is that Batman is completely healed. He’s faster and stronger than he’s really ever been under the cowl. He’s also got a new role for Duke Thomas, the character we’ve all worked to build together. He’s revising his program in terms of taking someone on, taking on a partner in a way unlike any he’s done before. There’s a whole new approach for how Batman sees himself in relation to the Bat-Family.

We had a lot of options in terms of cliffhangers or teasers to get you to read Batman: Rebirth or All-Star Batman #1, but one of the things we really connected on was doing an issue that just about Batman being reborn, and the mythos being put back together in ways that will see some elements changed or new. And some other things just put back as they should be. Bruce is back. Alfred has his hand back. Bruce has his money back. They’re back in the cave. Jim Gordon on the roof is back. Batman is completely restored. We have some great new pieces, but all your favorite stuff is there, too.

TK: Rebirth is to me the idea of having to move comics forward. They need to be modern and reflect the world we’re living in, but they can’t lose their classic elements. They can’t lose the mythic parts in moving that way. That’s sort of been the calling card here. Batman: Rebirth #1 is the return. It’s all the things that even my two-year-old knows about Batman.

So it’s all there, and now we can break it apart and show why all these things are important, why they live in our hearts. 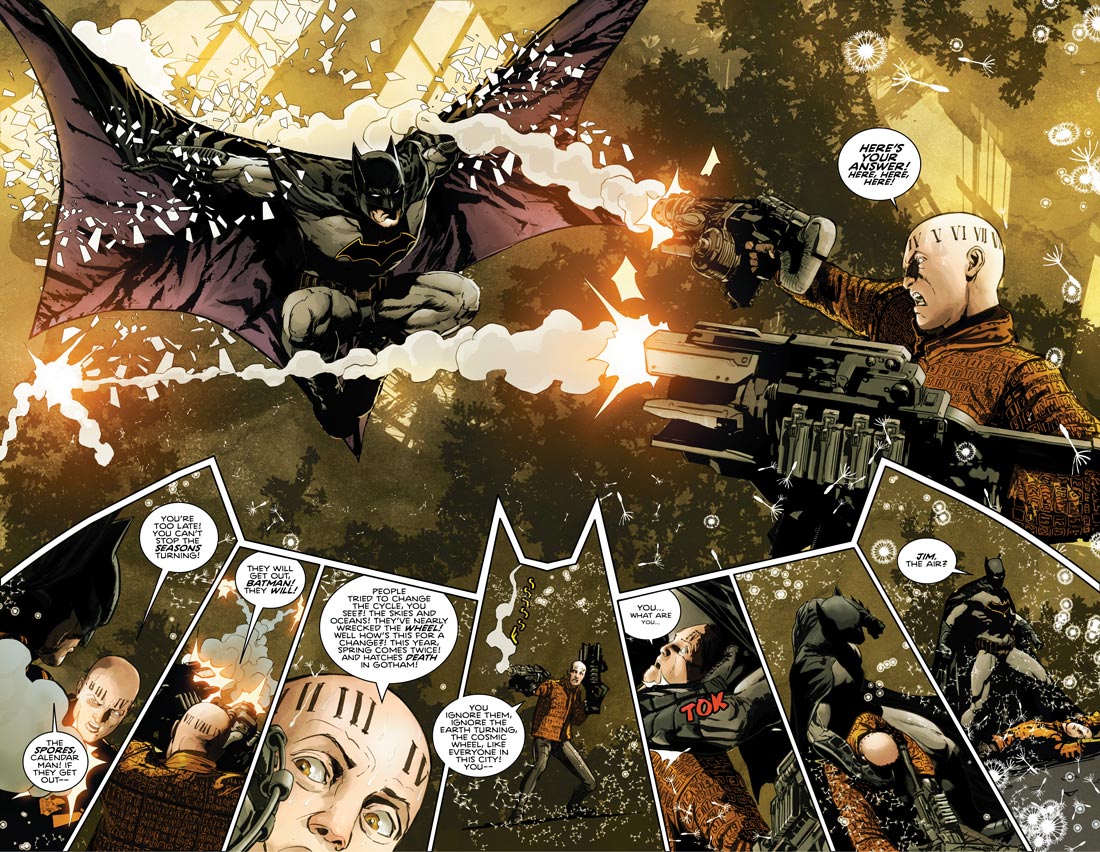 MSG: Since you mentioned him, tell me a little bit about Duke Thomas and your take on him.

TK: I love the character. I loved writing him in Robin War and in the end, he was the hero in that entire series.

We have a whole arc for Duke and he’s going to become a huge player in the entire Bat-universe going forward, both in my book and Scott’s. The central part of his character is he doesn’t need Batman like the other Robins do.

Tom, Tim [Seeley], and I have been talking about Duke for months — since the last San Diego Comic Con, actually — and how we get him to the place we needed him to be. The thing that we really hit on together is that Duke is really the first Robin to believe that Robin doesn’t need Batman. At all. He believes Robin is a separate thing. And in that way, he changes Batman’s thinking on what it means to have an ally or to train somebody.

He’s a really interesting character in that regard. And he has this really great story with his parents that I think is extremely moving — being irretrievably lost to the darkness of the Joker. How a kid can work through that to be the hero he needs to be, but also have to struggle through the darkness. I love him!

Just before we got on the phone, I was actually sending Tom designs for Duke’s costume eventually. 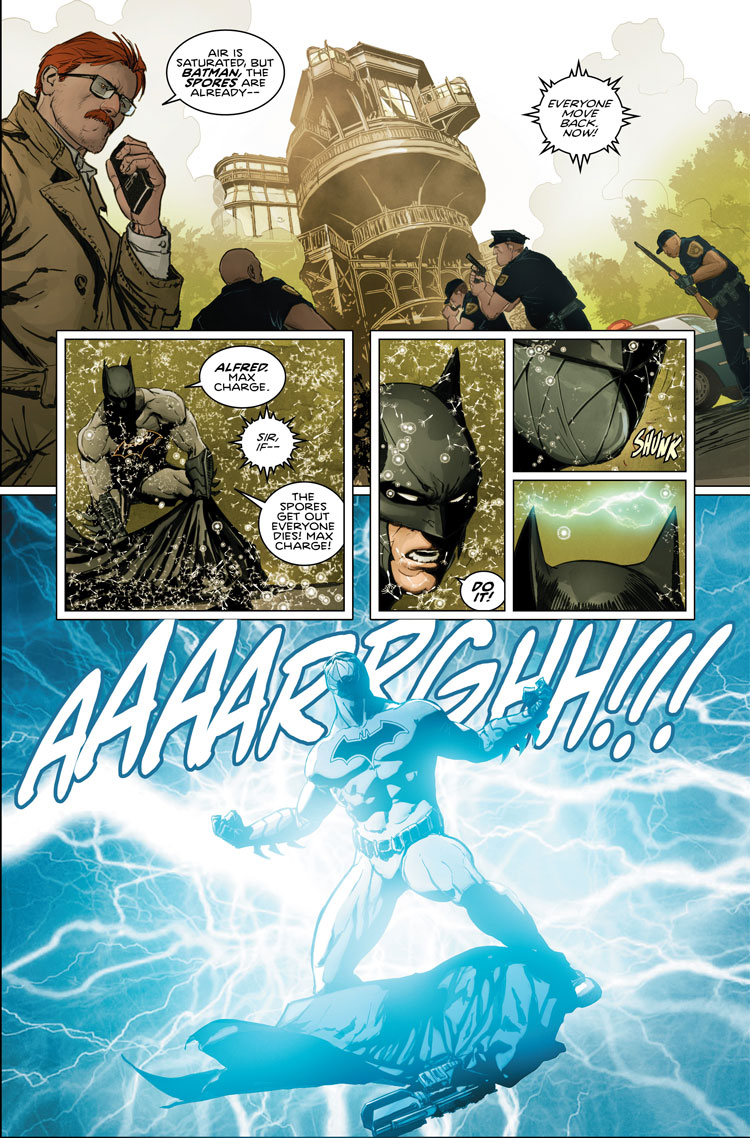 MSG: Cool! And we’ve also seen in the solicitation for Batman: Rebirth #1 a tease for a villain we haven’t seen in quite some time — Calendar Man. Why did you want to pull him out of the archive?

SS: Again, one of the great things about working with Tom is that we have similar sensibilities. Like when a quieter issue can be really powerful, or when to go really bombastic. This one, we wanted to find that right balance that’s hopefully poetic and has really big moments.

Since this issue is so much about being reborn, we pulled Calendar Man out to see if there was a way of using him that’s new. We redesigned him, which you’ll see, but I think there’s something very spooky about who he is. It makes him both frightening and resonant beyond someone just obsessed with the months.

Without giving too much away, I can say you’ll be seeing someone really physically different than you’ve seen as Calendar Man before. Physically and thematically.

TK: It seems silly to say. I mean Calendar Man was the guy who just changed costumes every issue for the months. But there is something utterly frightening about a calendar. If I had to name something that really frightened me in the world, it wouldn’t be the Jokers, Riddlers, or Penguins. It would be the idea of time passing or ending. Either one of those things is the most existentially frightening things out there.

The idea of someone obsessed with time moving forward approaches the utter dread inside Gotham City.

SS: When we were working on this issue, Tom said that to me exactly, and it was like, “We’re going to have a lot of fun working together.”

It was such a great idea that hits on all kinds of nerves for me, both personally and with Batman. He would be afraid of Calendar Man.

This is just a preview of the investment and imaginative energy you’re going to get on Batman with this guy. 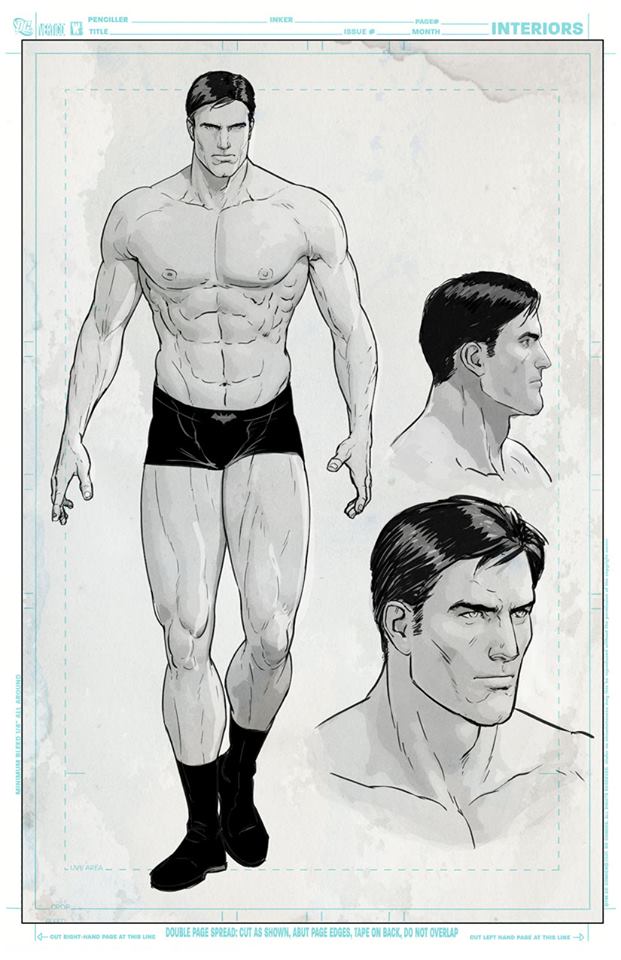 MSG: And Tom, you’re bringing Mikel Janin over from Grayson, first to do the Rebirth special and then regular arcs on the series. Tell me what you think he’s going to bring to Gotham City proper.

TK: When they first assigned me to work with Mikel back in Grayson #1, I said I felt like I was working with Jim Lee circa 1993. I felt it. This guy is going to be so huge. And now he’s on Batman!

Mikel and I have worked together now for so long that I can start to see his pages in my head when I write. It makes it easy in one sense. On the other hand, he knows me so well now that he knows when it’s right to throw out my scripts. [laughs]

Scott and I switched off writing scenes in Rebirth, but I knew for my first scene with Mikel, I needed to write Bruce with his shirt off. Because I feel like it’s our calling card.

Any other thoughts about the ongoing run you want to throw out there?

SS: I would just say that anyone who liked what Greg and I did on Batman needs to go out and pick up Tom’s. He’s going to do something that’s different and his own, but we’ve got the same spirit.

Having come after Grant Morrison myself, I know we had very different visions, but the thing that I loved is that Grant was so uncompromising and brave. We tried to do that on Batman, too, and I know Tom will do the same. He’s certainly the perfect successor on the series. You have to go pick this up. Fans are going to be really happy with it. 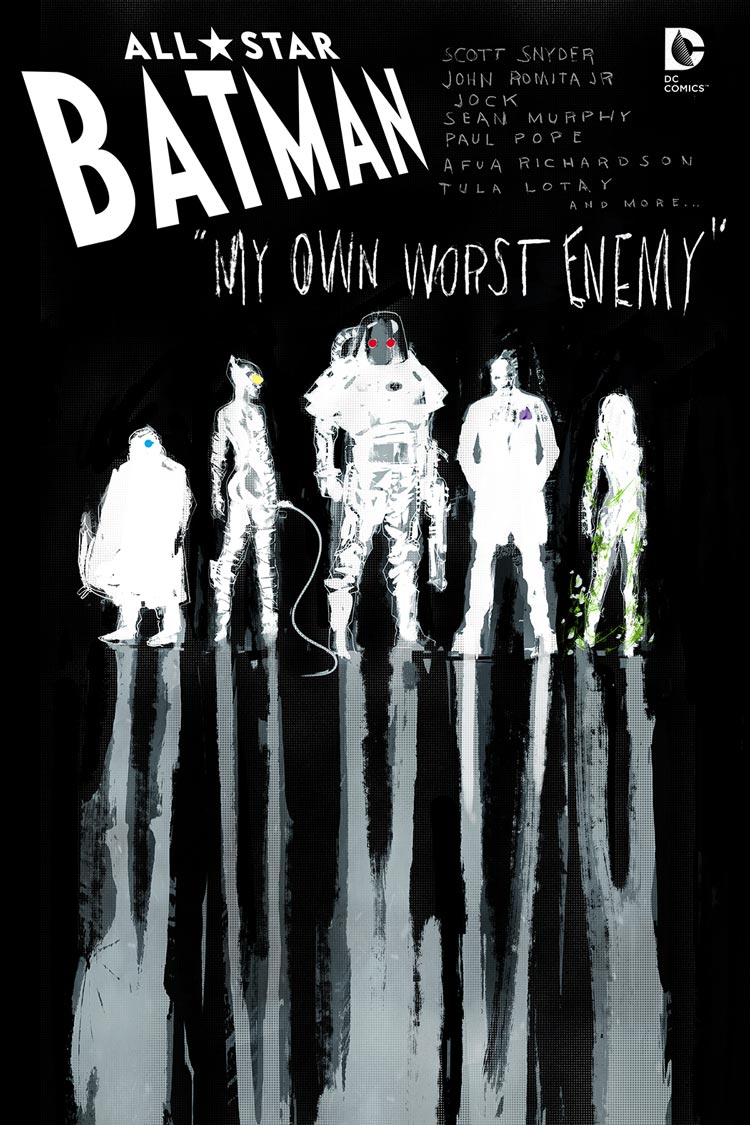 TK: And since Scott talked about mine, I’m going to steal that idea and say that I’ve read the first script on All-Star Batman #1 and seen some art. Everyone says that All-Star Superman #1 is their favorite Superman story. I feel like this one is going to follow in that tradition. This is a story that is going to define the character for a lot of people for years. It’s both fun and transcendent. Which is really fucking hard to do.

DC Comics’ Rebirth begins in a matter of weeks, with Batman: Rebirth #1 arriving June 1, and All-Star Batman #1 arriving this fall.