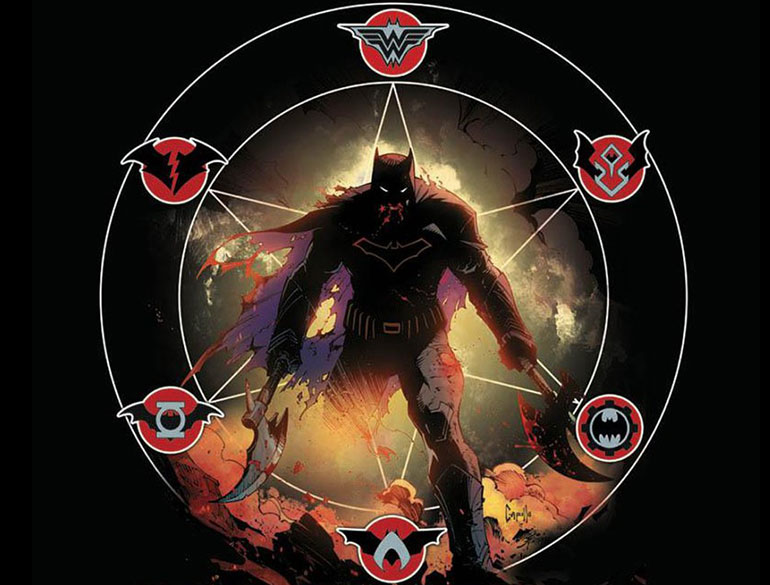 Scott Snyder, Greg Capullo, Jonathan Glapion, and FCO Plascencia need no introduction…this is the team that ushered in a new generation of readers to Gotham City and their run on Batman that changed the character and added wrinkles to his mythos that are still used today in the DC Rebirth landscape.

The dream team has reunited to unveil the DC Comics Event Dark Nights: Metal and after two worthy preludes in Dark Days: The Forge and The Casting respectively, the roof is set to explode on the DCU with the first issue of the event. Metal #1 reveals all manner of secrets, surprises, and revelations that set the stage for what’s to come as the event gets underway and I talk to Scott to try and break down some of the happenings of issue one and the history that’s led us to the event. 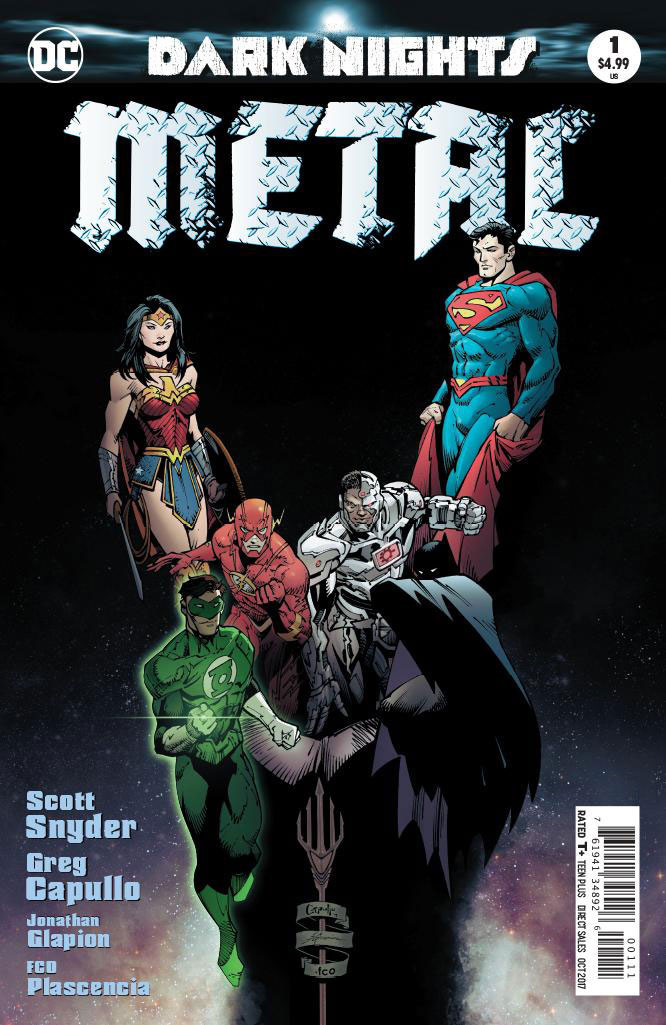 Terrence Sage: To begin, where did the idea of incorporating Tribes into the history of characters like Hawkman, Hawkgirl, and Batman come from?

Scott Snyder: It really was back when I was working on Batman with Greg and we were sort of around Endgame. Right at the end. And those stories were so much fun and so expansive with that sort of use of the mythology that I started thinking about “What if I did something that had a bigger scope and what if Batman discovered a mystery that went all the way back to the beginning of human history?”

The answer points to Batman investigating it in a way that scares him off. Well, then who’s another great detective of history in the DCU? That’d be Hawkman.

So it’s like, “What if I use Hawkman as a detective who is following this case and when he disappears, Batman picks it up?” That led me to Nth Metal, which I knew right away would be the title because Greg is so metal in every way! I approached Greg and was like “Greg what if we call it Metal and it’s about…” I didn’t even get to tell him what it was about because he was like “I love it! Let’s do it!”

So that whole part of the idea for incorporating Hawkman, Hawkgirl, and Batman — making them a part of one big tradition — came to me. From there it really came about “What are they going to discover through this metal?” What is something that’s worth it?

I started thinking about the Multiverse and all of the incredible work Grant did with Multiversity and how he was always exploring new realms with it. Well, what if I take this concept I’ve been fascinated with the last few years: Dark Energy and Dark Matter. It’s this notion that there’s all this material in our universe that comprises almost the majority of it and yet, we can’t perceive or detect any of it except its effects.

So what if we make a Dark Matter, a Dark Energy, a Dark Multiverse that reacted to our hopes, our dreams, and our nightmares much differently than the real Multiverse and the set matter and anti-matter universes? 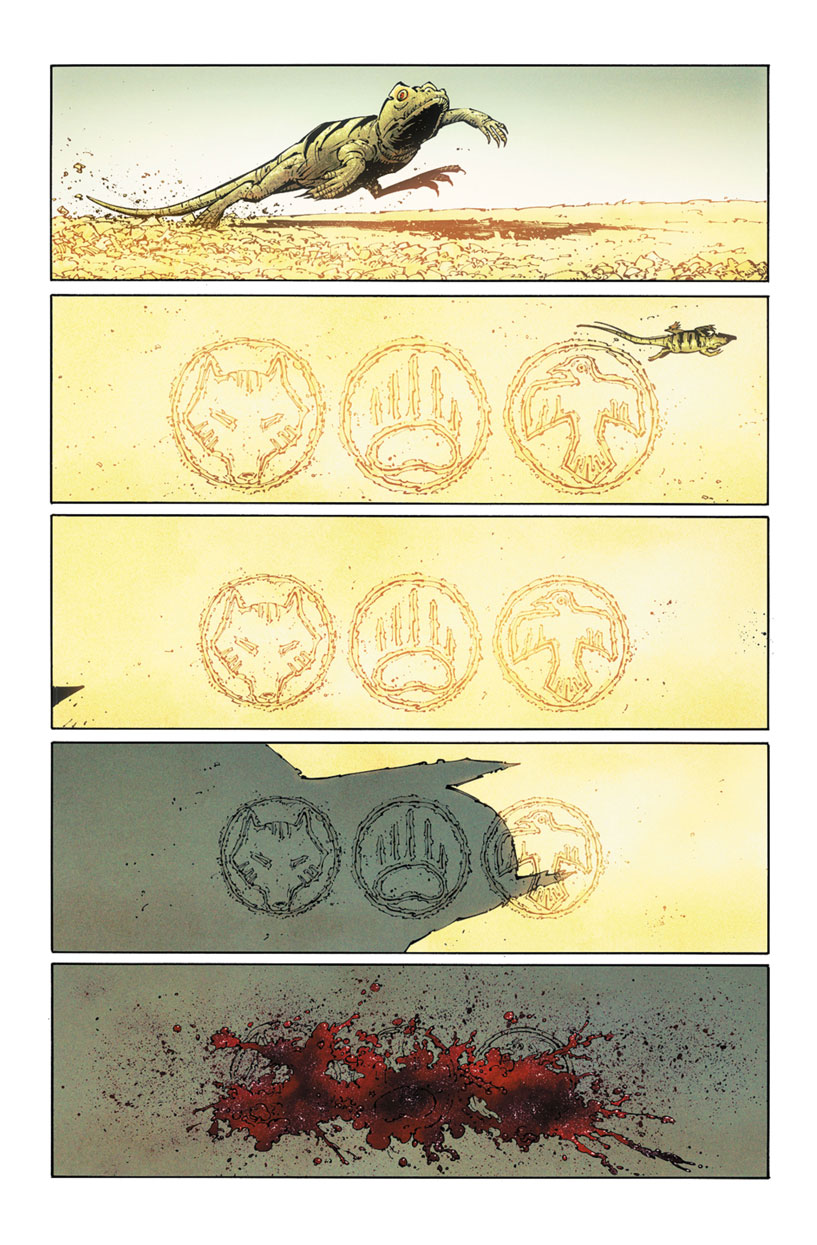 TS: What’s it like writing an expanded cast of characters including the Justice League, Hawkman, and the Blackhawks?

SS: Oh dude, it’s such a joy! Working on Batman was so fun, but by the end, you could tell we were pushing against it elastically — where it was really about trying to be original and make stories that were personal to us. But we stretched the mythology as much as we could.

Commissioner Gordon was Batman and we created all new kind of crazy villains. So I was already looking at the DCU, starting to think “Where can we go next?” “What would I use next?” “What are the characters I’m dying to write?”

And once they gave the okay on Metal it was like the entire sandbox suddenly opened. The whole toy chest was opened. So for me it’s just like what we’ve been waiting to do for years where Greg and I both are excited to be able to write characters like Mister Terrific, Plastic Man, Doctor Fate, Steel, and all these characters I’ve never thought I’d get to do.

I hope when you pick up the book it’s palpable in the pages, because it’s definitely there internally. The project of Metal is to celebrate the most bonkers, over the top, and fun storytelling of the past of DC and the present. It connects to sort of everything from Final Crisis, Infinite Crisis, Crisis on Infinite Earths, Geoff’s great Hawkman run, Grant’s run, and Neil’s material.

Those things are great because they’ve built whole new concepts out of the great stuff that came before and Metal is largely about that, as well. Bringing in all these characters we’ve been dying to write and draw and taking them someplace you wouldn’t expect to meet new characters. And to meet new concepts and things we’re getting to introduce for the first time. 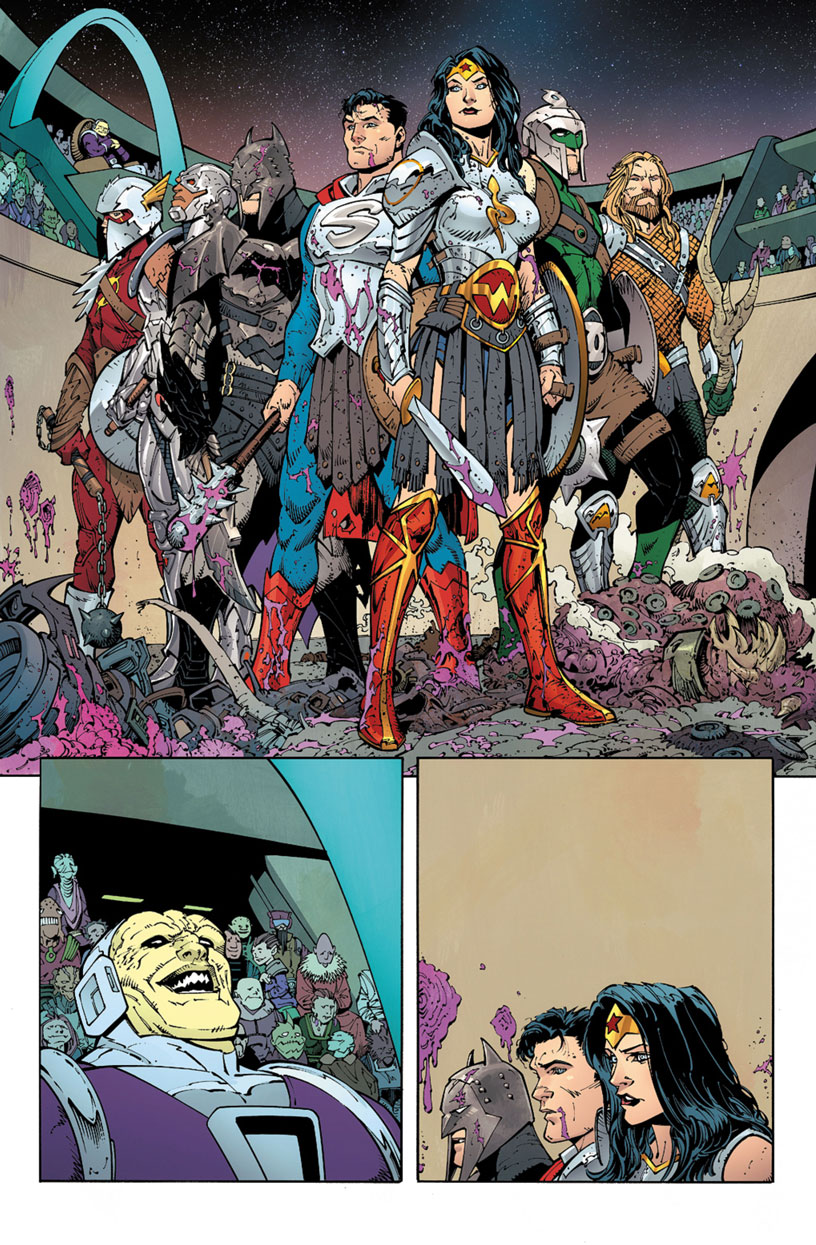 TS: Will any New 52 characters return to the spotlight or are we slowly seeing the Pre-New 52 characters that we know return to form? The Aquaman joke leads me to believe that history is still working itself out, like referencing his 90’s history.

SS: I think the idea really of Rebirth is taking the best of the New 52 and marrying it to the great legacy of the DCU. And making sure those stories we did in the New 52 have connective tissue. So that if you love them, they don’t exist at the expense of everything you love before — and if you love the stuff that came before, they don’t wipe that stuff out.

Geoff is doing a great job with Doomsday Clock to explain those things and make connective material there. So for us here, it’s more about celebrating the characters in a way that doesn’t reintroduce them in a fashion that destroys anything that came before — instead to celebrate the stories of the past.

For example, reintroducing Kendra Saunders. All the stuff you’ve read about her still stands, we aren’t changing her, but she had adventures that you didn’t see in between the end of Brightest Day where she returned as Shiera and now.

So there are some things that happened there that we’ll get to and explain. It’s not a new version. It’s not something where we’re trying to step on anything that came before. What we really want to do is remind you of stories that you love and take you to a new place with the same characters. 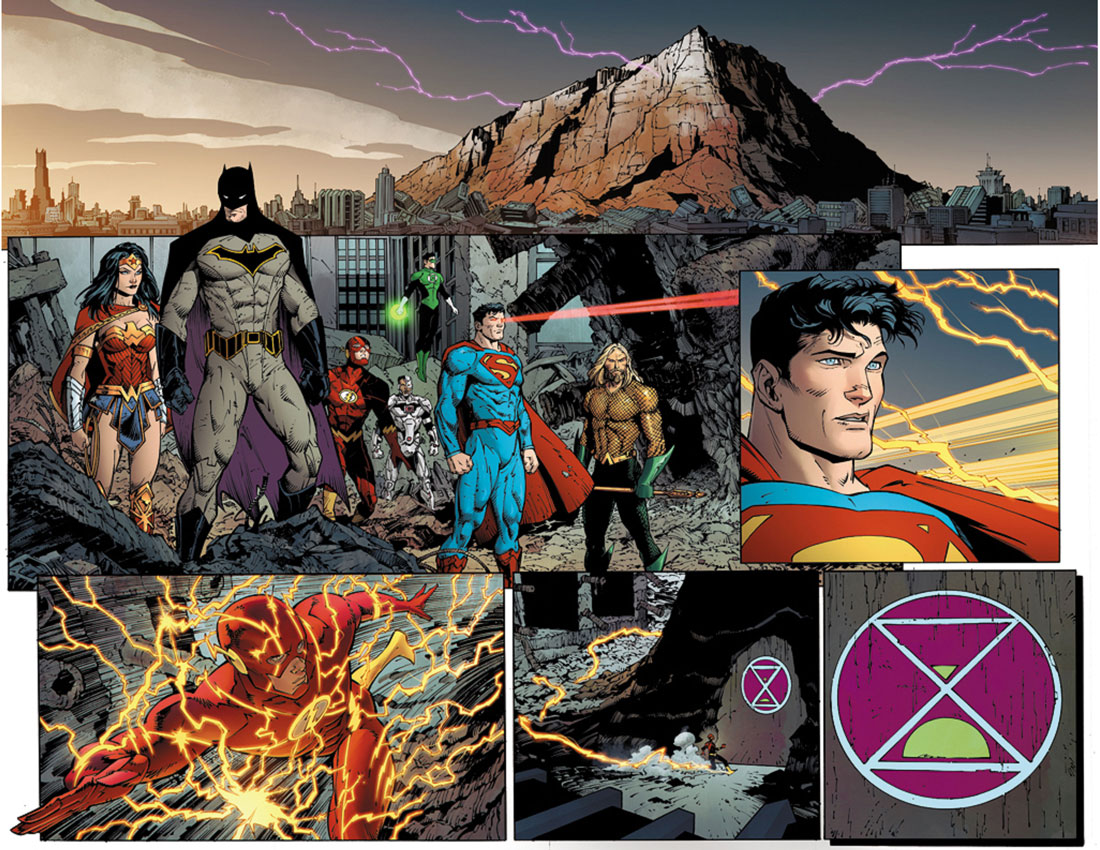 TS: With the news of Duke Thomas getting his own series, does his role as “The Signal” get further defined in Metal?

SS: That was The Forge and The Casting that really had a spotlight on him. He’s in Metal at a couple of points. He comes in and out as most Batman Family members do. The whole family appears in a couple of places.

His role is REALLY going to be his big screen time in “Batman and The Signal” with Cully and Tony, and I am really, really proud of that book. At this point in my career, I don’t have any reason to get involved with any Batman projects other than the ones on my own plate. But when Tony (who was in my class) pitched me some of the ideas he had for the character — about him being a “Hero by Day,” which is something Geoff Johns suggested initially — and all this other cool stuff, I was like “you have a purpose and a passion with this one.”

Everything you like about that series is him and Cully and I’m just kind of the help along the way. I really people will like that one, and I’m really, really proud to be involved. 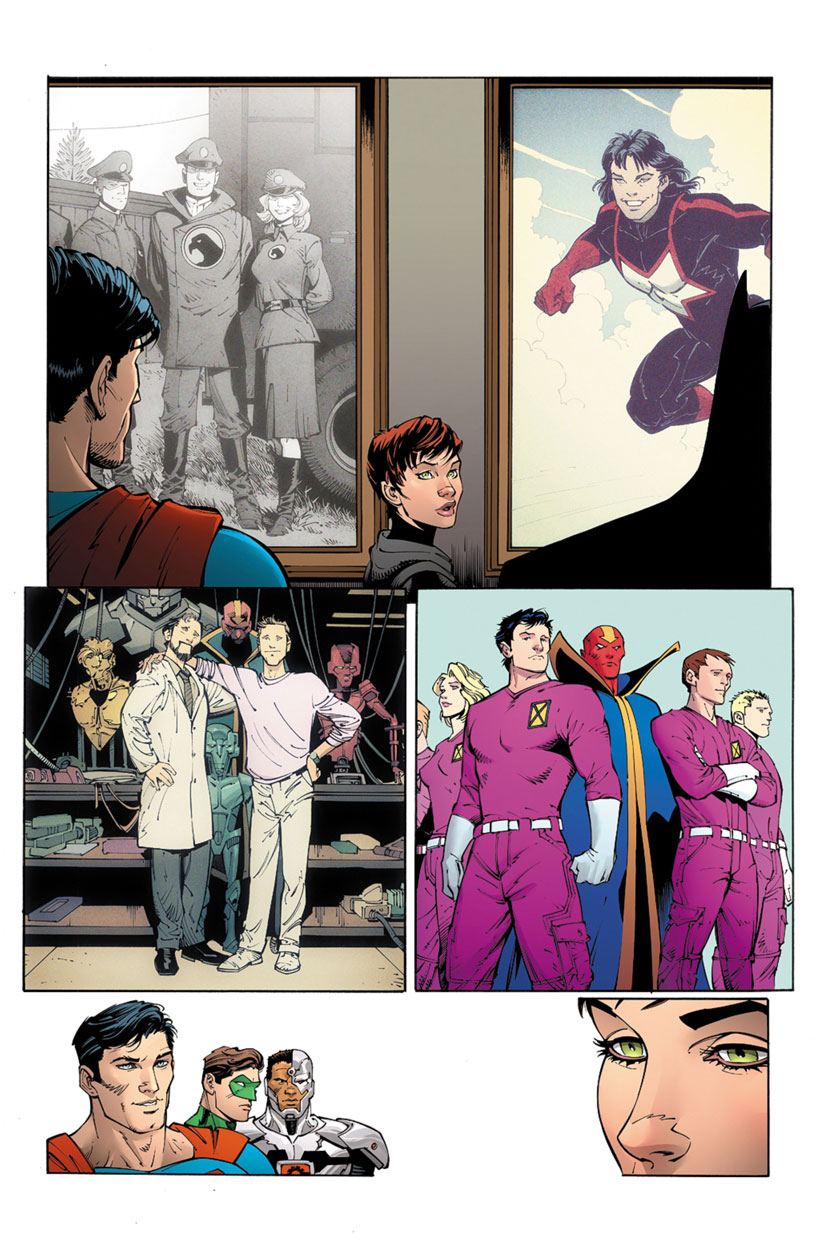 TS: You and Greg Capullo have defined Gotham for an era of readers. What’s it like having him draw a Justice League Voltron, Dinosaurs, the entire Justice League, and a mountain in the middle of Gotham City?

SS: Oh my God, dude, it’s what we’ve been waiting to do! It’s really like, by the end of Batman, all I was thinking of was “When can we do a Hawkman Kaiju fighting a Joker Dragon? Like, when can we do this?!”

The thing that’s so great about Greg is his acting skills on the page. I love when I see him draw John Constantine and he ad-libs. They’re in the House of Mystery in issue #2 and they’re looking for him and in the scene, John is in one panel and he’s saying he’s not here. But Greg took to the time to draw him flicking a cigarette.

It’s that where he just gets the character, because he just loves them too — and has been waiting to draw them. So there’s a real exuberance in the pages for us that I hope is completely readable and obvious for you guys when you guys pick it up. 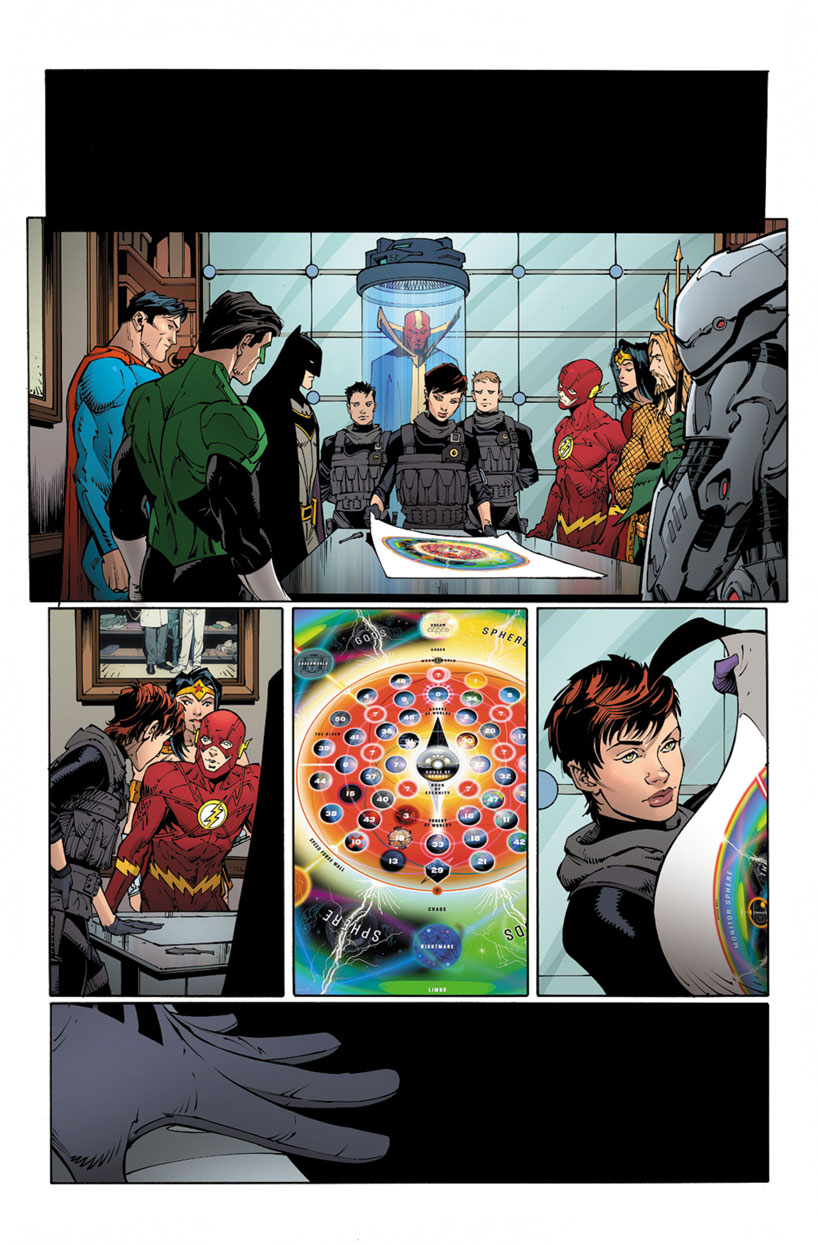 TS: Could you have done an event of this magnitude and scale during your New 52 days or does the landscape of DC Rebirth strike the perfect opportunity for you to unleash Metal?

SS: Definitely the second. For me, the New 52 was really about trying brand new concepts and new takes on the characters. And sometimes that went too far admittedly, and sometimes I think it hit just right. And maybe sometimes it didn’t go far enough, but it was a great time for that kind of experimentation.

On Batman, we tried to be very reverent of what came before and tried to be a little daring with things like “Zero Year.” With Rebirth, the great project is to connect the New 52 to all of that great material that came before it, so they don’t feel like separate universes in some ways.

Now that’s it’s all connective I can do things like point back to “The Death of Superman,” or point back to “Infinite Crisis,” and point back to characters like Plastic Man and Shazam, because they don’t need to be reinvented the way they did with the New 52 necessarily. There’s a huge elasticity and flexibility now that Rebirth has made the landscape broader and put everything back into play in new ways. So it’s huge fun and Metal is about that.

Doomsday Clock is largely about showing you what happens and also creating this great story that connects different aspects of the DCU. As with Metal, it’s about accepting that all these things are now united and moving into a territory that’s brand new. They are really different projects, yet at the same time, I think they compliment each other really well.