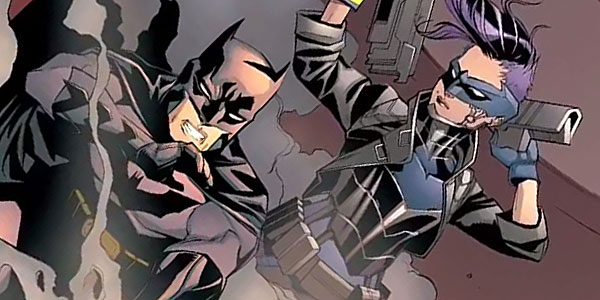 For his 75th Anniversary in 2014, Batman is clearly pulling out all the stops. Not only is writer Scott Snyder detailing the Dark Knight’s new origin for the New 52 alongside artist Greg Capullo, but he is helping to launch the Batman: Eternal series with a host of other writers and artists. As a special interlude to the ongoing story set in the past, Snyder has taken readers to the near future in Batman #28, to reveal a ton of changes to Batman’s world, and some notable additions! Scott took time to chat with us about the women of Gotham City, their roles at Batman’s side (or across the divide), and what mysteries still lay ahead in the upcoming weekly series! 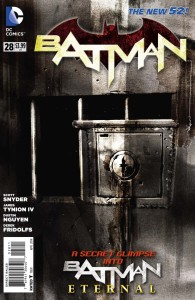 Matt Santori: Scott, tell me: what inspired inserting the preview issue for Batman: Eternal into your ongoing run?

Scott Snyder: One reason was just logistical, where Greg is so fast. He’s always ahead on Batman and does like a page a day. If I opened my mail right now, I guarantee you, there’d probably be one. What happened was, I was reading the finale to the second section of Zero Year, which includes a lot of the important emotional material from Bruce’s past — like the scene in Crime Alley, actually. It occurred to me that the issue was getting longer and longer, clocking in at about 35 pages or so. Greg offered to do it and still stay on schedule, but I thought, “Why am I punishing my friend for being ahead?”

So, I said, why don’t we do something where I’ll expand it to 40, and Greg could use some splashes instead of always needing five panels a page (and try to cram too much in so he could do it on time)? Instead, we’ll give readers kind of a reward for allowing us to do our take on all the secret material from Batman’s origin. So, in that way, it became about “Do we go back to the present and give them a fun story?” We started to think, instead of going to the present, why don’t we reward everyone by showing them the future of Gotham?

And there’s so many things that will happen in Eternal. There are so many issues in that thing — 60 issues, essentially double what I’ve written on Batman already in its entirety. It felt like there was plenty we could put in there and still keep the biggest surprises hidden. So, that’s really what it boils down to. And I approached Dustin Nguyen, who is like an old friend at this point, and he said he’d love to do it. It got approved, and that’s how it came about. 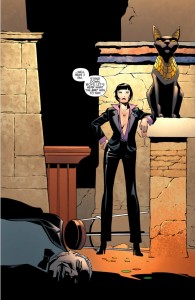 MSG: One of the most notable shifts in this issue is from Batman working with a team of male Robins to being surrounded by a fleet of new female associates. Can you talk a little bit about the state of women in the Bat-Universe and your thoughts on that change?

SS: For me, in my creator-owned work, I write a lot of female protagonists. Both of the protagonists in The Wake are female, and in American Vampire, the main character is honestly Pearl (even though Skinner is billed that way a lot of the time). So, the idea of creating some female heroes, it wasn’t a big initiative. We didn’t set out to only create female heroes, but it was sort of natural to a lot of us working on the book.

When we had our summit for Eternal to discuss what we wanted to do this year, a lot of the characters that came up for discussion that we thought could use new statuses like Catwoman, or other characters that we felt could evolve or be brought in to do different things — or even new characters that were pitched — just happened to be women. So, we just sort of ran with it. Once we were writing the issue and seeing the state of it, I was amazed. Batman is really surrounded by women in this, which felt great!

And that’s what the 75th year for us is all about — taking some risks and creating new characters that are exciting to us and feel like organically right choices for the storytelling we want to do. And to celebrate the characters we know and love by giving them stories that present them in roles that will be surprising, but true to course. That’s what we’re trying to do with characters from Bluebird to Catwoman, essentially. 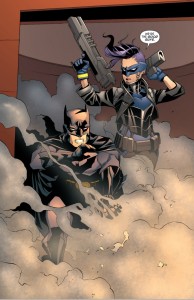 MSG: Speaking of Bluebird, your plans for Harper Row seem to have evolved on the page — right in front of our eyes, much like the character herself. How did the motivation to have her take up the costume and name develop?

SS: One of the goals when we created Harper was to try not to have a final role for her set in stone — meaning, to not know whether she would become Robin or Nightwing or something brand new to play with. Ultimately, the point of her is not to be a super-hero, but was to create a character who would be boots on the ground in Gotham. She would be eyes and ears in the way that she’s a working class character who struggles with the day-to-day life of living in a really tough city. And she has a younger brother she takes care of, and who is a very important character to us. In that way, it felt like, “Let’s get her on the page and see how she feels and who she is, and who Cullen is.” And not worry about what they’re going to become down the line.

As we got closer, I realized we could create a new… not sidekick, but ally for Batman, with a different sensibility. The thing that makes her very different to me is that she’s been let down by so many people in her life, that she doesn’t want to know who Batman is under the mask. She has no intention of becoming a sidekick, like the typical Robin, in that way. She just wants to meet him at the scene, help him, and then go back, because she knows that she’ll be let down if she knows who he really is, as a person.

She’s a tremendous amount of fun to write, and that lends itself toward creating this new character. “Bluebird” has a lot to do with the mystery surrounding her mother, her past, and all of those things that we’ll get to explore in Eternal. 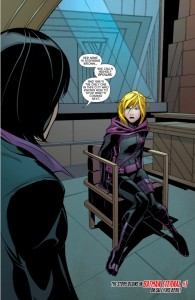 MSG: Of course, the big delight of the issue will be the appearance of Stephanie Brown, in very familiar togs. Her return is at the end of what felt like a very long road for many fans. What are your thoughts on her place in Batman: Eternal and how she will be similar/different than how we’ve seen her portrayed before?

SS: Well, it’s tricky, because we wanted to bring her back in a way that would keep her who she was, and a character we loved. I’m a big fan of the character. I’ve been reading and was a fan from before Bryan [Q. Miller] took her over, but once Bryan wrote Batgirl, I loved that series. For me, it was about bringing her back in a way that would be familiar and keep her exactly who we know, but give her a new status and sort of change what “Spoiler” means — to do something that would give a new take on her character in costume. We didn’t want it to feel like we were just bringing her back and doing the same thing with her all over again.

The status of Spoiler is hugely important to Eternal, where she knows things that make her of great interest to a lot of people. We wanted to update the idea of “Spoiler.” I never liked the idea that Stephanie is called Spoiler because she spoils plans. I totally understand it — and to anyone who loves that name, my apologies — but for me, it felt like such a downer. So, part of the fun was trying to think about what a “spoiler” means nowadays. How can we redefine that name for her? Her role in Eternal engenders that name and her part in that story is really huge.

I really, really hope fans like what we do with her. It’s really exciting and thrilling just to get to write her. It’s nerve-wracking too, because we know how much people care about her. What I’d like to say is thank you to everybody who was out there and pushed to bring her back. We really owe her return to you guys, because you made enough noise about the character that everyone was really excited and willing to bring her back in a way that would give her a big spotlight. 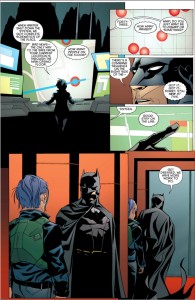 MSG: One last question: There’s a “blink and you’ll miss it” scene of another character in the Batcave working for Bruce. Any final thoughts or special teases for the Comicosity audience about that mystery woman?

SS: All I will say is that it’s definitely someone who will surprise people and someone who will wind up playing a really important role both in Eternal and in Batman. We tried to choose our spoilers in this issue really, really carefully and pick things that would matter later on. Like, Selina’s status as the kingpin of crime is something that will stick. We want to use that in Batman and do an arc with that, and you’ll see it reflected in Catwoman. All of that stuff is meant to be meaningful, and not just small shocking things that aren’t important to the story. So, that character we see briefly is going to be a big, big part of Gotham mythology soon.

MSG: Thanks so much, Scott!

Scott Snyder’s “Zero Year” storyline continues next month in Batman #29, but to follow the threads of Batman #28, look no further than Batman: Eternal #1 in April from DC Comics!