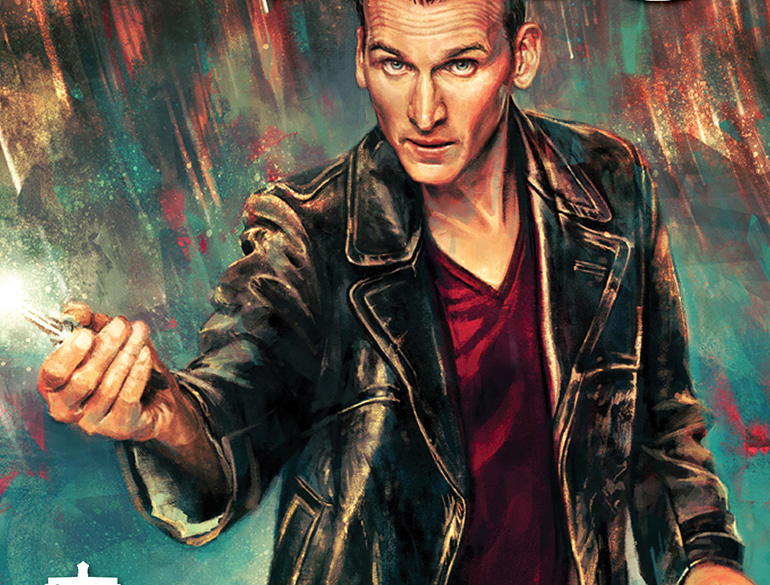 This March, the Titan Comics is launching a five part miniseries tying into Doctor Who’s 10th anniversary; roaring into stores staring the ninth Doctor! The solicit says the story takes place right after their  World War II adventure and includes Rose and Captain Jack. The trio discovers that Time Lord technology is being sold on the intergalactic black market. Including art from Alice X. Zhang, I got a chance to talk to the book’s writer, Cavan Scott. 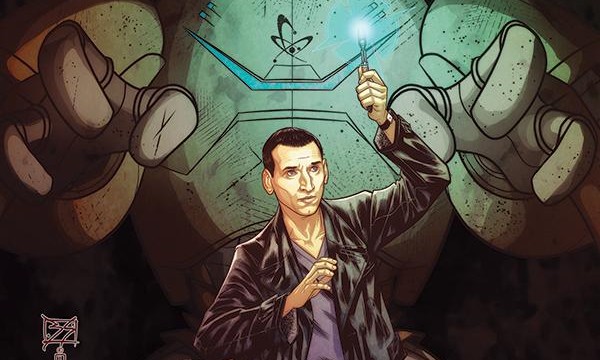 Jessica Boyd: For comic readers who may not be familiar with the Doctor Who series, what would you say to them about trying out your miniseries?

Cavan Scott: Doctor Who sounds crazy if you’ve never seen it before. You’ve got a 900-year old alien who lives in a time machine that is bigger on the inside than it is out. He travels with a 19-year old girl from London and a smart-talking time-agent from the future whose hobbies include flirting with anything – and I mean anything – that moves. The Doctor doesn’t carry guns, but prefers to arm himself with nothing more than his wits and a sonic screwdriver. He rattles around the past and future history of the universe righting wrongs, fighting an inordinate amount of monsters and basically telling evil to sling its hook.

JB: What is your favorite aspect of the 9th Doctor? What sets him apart from the other regenerations?

CS: The Ninth Doctor is a man who has seen – and done – terrible things. His experiences in the Time War have rocked him to the very core and made him question who he is – but he’s determined to make amends. Yes, there’s a lot of rage in his character, but there’s a hell of a lot of hope there too. He’s determined to make the universe a better place and to make himself a better person in the process. To remember how to be the man he was. He gets it very wrong at times, but never stops trying.

Plus, he has a really, really silly smile.

JB: Are there clues laced throughout the story about when in the course of his adventures with Rose this story takes place?

CS: The biggest clue is the presence of Captain Jack. We’ve placed the story right after the events of “The Doctor Dances,” or as near as possible. Jack has just joined the Doctor and Rose on their adventures.

JB: In the early days with Rose the 9th Doctor’s relationship was very fun yet reserved. How do you think they see each other right now in the miniseries?

CS: They’re very comfortable together by this point, although there’s the added complication of having Jack onboard now.

The Doctor is very protective of Rose – and vice versa, for that matter. They’re becoming a proper partnership, although their friendship is going to be tested by the events of the miniseries.

JB: We’ve heard that Captain Jack will be making an appearance. Are there any other reoccurring characters that fans should be expecting to see?

No, we’ve got a completely new cast of characters – including two brand new aliens. The Doctor finds himself caught in the middle of two warring alien races – the Lect and Unon – who are tearing time apart – but why? Who is on the side of the angels and who are the devils?

JB: The Doctor’s adventures can be extremely fantastical, taking unexpected turns. What do you do to put yourself into that type of mindset before writing?

I’ve been a Doctor Who fan for as long as I can remember, so it doesn’t take me long to get into the mindset at all. I’ve lived and breathed Who for years.

Specifically for the Ninth Doctor, before every writing session, I whack on Murray Gold’s 2005 soundtrack and listen to that iconic theme tune. By the time it’s finished, I’m usually tapping away at the keyboard.

JB: Comic readers may not be aware that you’re rather familiar with The Doctor, having worked on many of the radio dramas, other short stories as well as other Doctor Who comics series. How does writing a comic differ from writing for audio presentation?

CS: You don’t need dialogue in every scene – which is wonderful. I love audio drama – I grew up listening to radio dramas on BBC Radio and had tapes after tapes of American Old Time Radio productions like The Adventures of Superman and The Shadow – but sometimes you find yourself tempted to include dreadfully descriptive dialogue: “I shall just place this gun on this table beside this large sword which is mounted on the wall!” OK, Hopefully, I’ve never written anything that clunky, but you know what I mean. With comics you can actually show stuff – praise be! No need for characters to talk to themselves when they’re on their own! Glorious.

There are similarities as well, of course. Both are all about realistic, snappy dialogue. And, thinking about this project, I’ve already written for the Ninth Doctor for audio, so I’ve spent time listening to how the Doctor, Jack and Rose talk, which was a real advantage when approaching the comic. 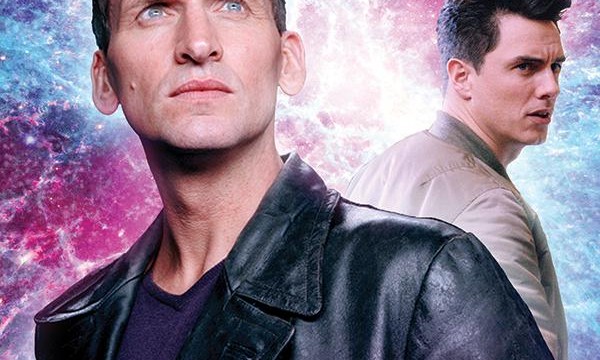 JB: How has the reaction been by fans upon hearing about your involvement in a 9th Doctor comic?

CS: Well, the love for the Ninth Doctor has blown me away. I knew he would be a popular choice, but wow! The buzz about the series has been amazing. I don’t think I’ll ever forget the day it was announced on the official Doctor Who Facebook page. I logged on a few hours after the announcement and we suddenly had over 20,000 likes! No pressure there, then!

Those Doctor Who fans who know me through my work on the audios or perhaps Who-ology, the official miscellany I wrote with Mark Wright in 2013, have been great as well. I was a guest at a Doctor Who convention a few weeks back and everyone wanted to talk about the comic. I’m working hard to ensure we live up to such high expectations.

JB: If given a chance to make the ninth Doctor stories ongoing what character or villain would you want to see him most interact with that you’re not already exploring?

CS: A Ninth Doctor ongoing series? I’d love that. Who do I have to bribe?

I’d love to see the Ninth Doctor working with Brigadier Alistair Gordon Lethbridge Stewart, who was the man in charge of UNIT during the Third Doctor’s era. I think they would have an amazing dynamic together – and wouldn’t always see eye to eye! I can just imagine their first meeting.

Oh and Cybermen. Definitely Cybermen. I already have the story in the back of my mind. The Ninth Doctor coming up against a troop of desperate 1960s-style Cybermen in a spooky gothic location. The Ninth Doctor didn’t get the chance to do enough gothic. Actually, can I start writing it now?

JB: Any another news or hints for our Comicosity readers?

CS: Well, it won’t be news for anyone who’s seen his work, but our artist Blair Shedd is FANTASTIC! Seriously, the pages he’s been producing are phenomenal. Amazing likenesses, loads of energy and truly cinematic colours. And the detail? Every page he sends through blows me away. It’s going to be one of the best-looking Doctor Who comics ever!

Thank you to Cavan Scott for taking the time to talk to us. You can order DOCTOR WHO: THE NINTH DOCTOR #1 with the Diamond Order Code:  JAN151599. It is scheduled for release on March 11, 2015.