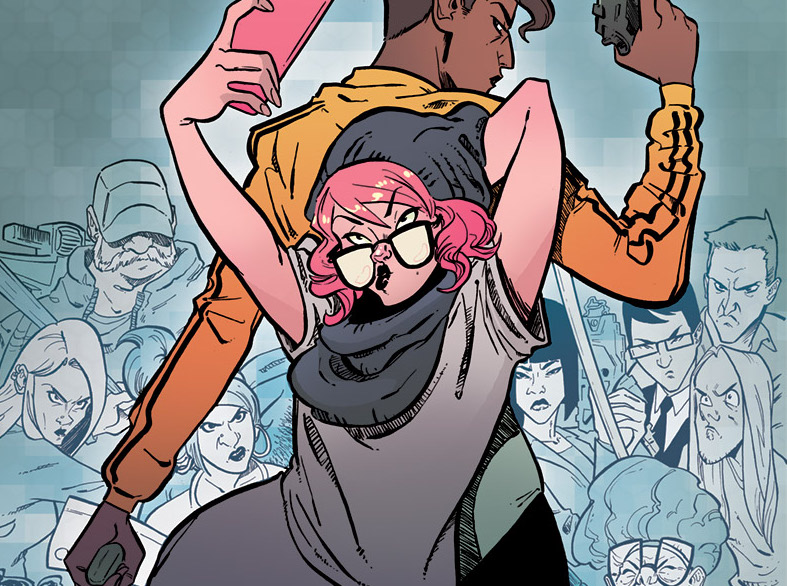 Need a ride to the airport? Don’t feel like going out to get a bite to eat? Looking for a significant other to share the night or your life with? There’s an app for that! We live in a world that funnels our lives and efforts to make it easier into our smart phones. Now imagine if you had a grudge against someone and felt so strongly about it that you wanted them dead. In Crowded, there’s an app for that too. Set in a world “10 minutes” in the future, Crowded takes a look at a society that we are just a second hand away from becoming. The action-packed story follows a young woman and the protector she has to hire to keep her alive. I had the opportunity to speak with Eisner nominated writer Sebela and artists Ro Stein and Ted Brandt about their interesting new world. 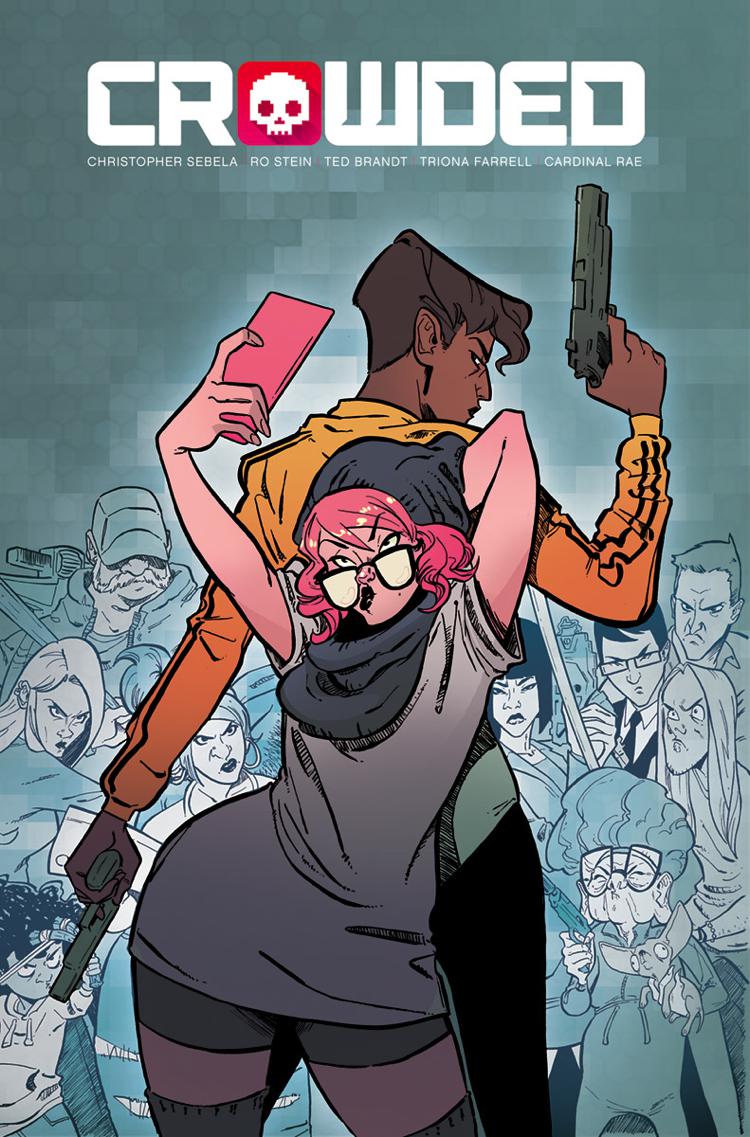 Chris C. Hernandez: The art and design of Crowded sets the story in the near future but it feels more like just a blink of the eye away. Though crowdfunding and the Gig economy may have a lot of benefits for some people do you feel like our natural tendency to overdo things is leading to your world of Crowded?

Christopher Sebela: I think that’s just a natural human tendency to find something good and useful and use it to the point of breakage, to see just what kind of tricks you can do with it that the manufacturer never intended. So thinking of this potential future, I kept calling it a “soft apocalypse” because everything is fine outwardly, but all these apps and platforms, they let people do the basest stuff they’d normally never think of. Like throwing in a few dollars to kill someone they don’t like, for example.

CH: For someone about to be assassinated Charlie seems to be fairly calm and have her wits about her. Is this just how you have to be to survive in her society or is she stronger than most?

CS: Charlie is used to living in a kaleidoscope. Every day is a brand new adventure to her and she adapts easily, simply because she has to to keep it going and not collapse while juggling 18 completely different things from the 18 things she was juggling yesterday and the day before. I think Charlie is just coping in her own particular way. She lets herself panic but then gets drunk to drown that out. She freaks out about what all this means but then immediately starts smirking about something totally unrelated. Hers isn’t maybe the best coping mechanism in the world, but whose is? Charlie’s one of those characters who kind of sprang out fully-formed and immediately started telling me how she felt about stuff, so I had to follow along. She wouldn’t be Charlie if she reacted any differently.

CH: For a hired gun Vita seems to definitely struggle with caring too much. Is this going to make her a better bodyguard or worse?

CS: Depends who you ask, I guess. Charlie would say it makes her better, because Charlie needs her to care about her and fight to keep her alive for the next 30 days. If you asked Vita, she’d say it’s going to make her worse because she’s so focused on projecting this professional image that softening to the point of liking her client or her client’s dog, even, will chip away at that. But that’s just what Vita thinks and not necessarily what’s true. If that makes sense. Suffice to say we’re going to be digging deep into Vita and Charlie and what makes them tick, with all the complications that make up the same elusive people in our everyday lives. 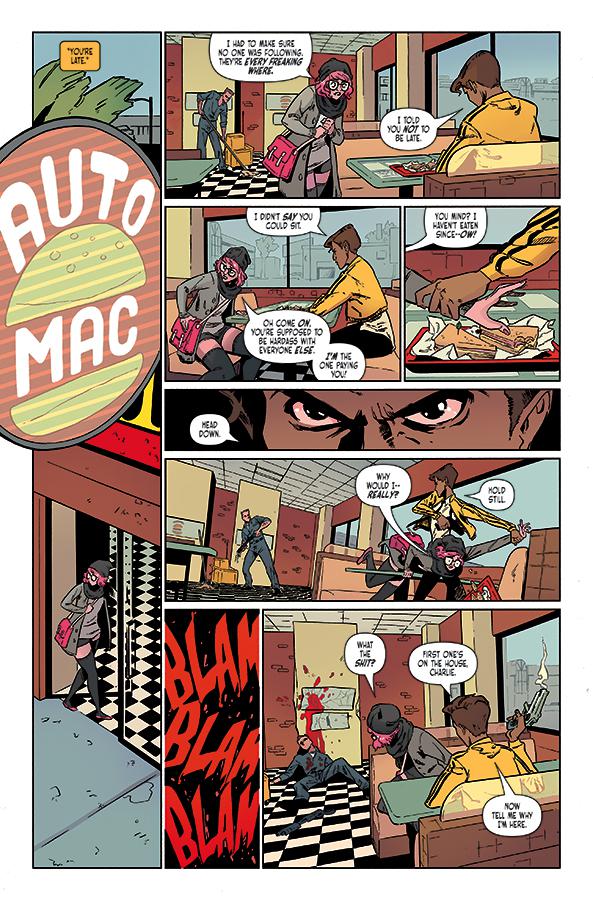 CH: Charlie seems to dress more like someone nowadays might dress while Vita dresses more in line with her time. However, their way of thinking is reversed to the way they dress. Vita is more old-fashioned and Charlie more with the times. Do they each have something the other is lacking or will one change more than the other?

CS: I think they both have gaps the other doesn’t and they share some blind spots. It’s what makes making friends the longer you’re alive a bit harder to pull off, because the longer you’re around, the more stuff you have to unpack to this new person and then you gotta decipher their stuff in return. Most relationships, whether they’re friendly, romantic or business, when they get really intense, both sides change. Sometimes for the better, sometimes for the worse. Charlie and Vita won’t be coming out of this experience unscathed in any sense of the word is about all I can say for sure.

CH: What influences did you draw from to create the look of the Crowded?

Ro Stein: As far as the world itself goes, the feel we were aiming for was not dissimilar to season 7 of Parks & Recreation.

Ted Brandt: Yeah, that level of technology seemed like a perfect fit for a world Chris always describes as “ten minutes in the future.”

RS: Style-wise, we started off looking at Daredevil: Born Again for storytelling, and a lot of my actual art style came from looking at animation. We wanted a kinetic style for the book so that was a great place to start!

CH: Is it easier or harder to draw our society just a tick ahead in the future rather than far in the future?

RS: Honestly, with our work history we haven’t drawn much set in modern day, so it’s all new! I’m yet to try drawing anything in the far future so I’ll have to see when I do. 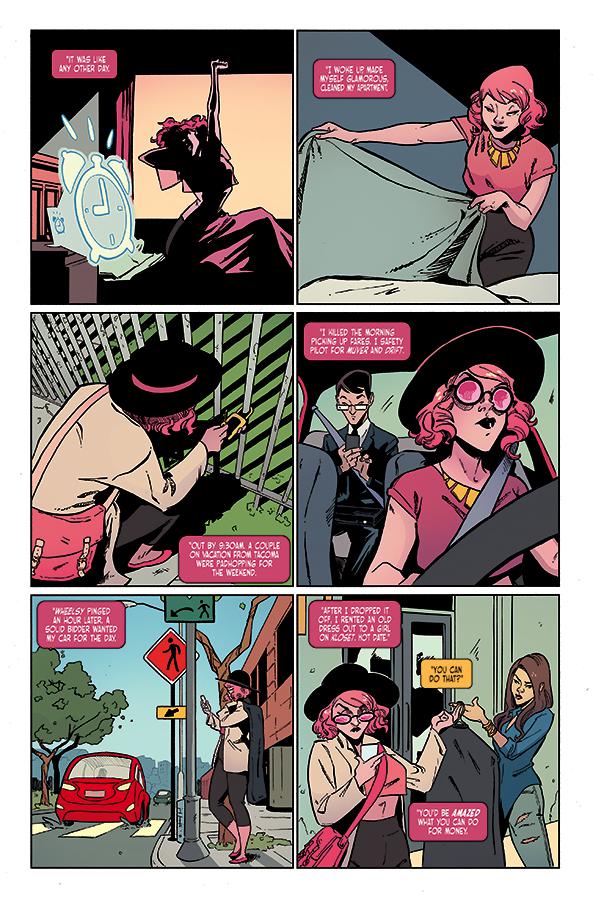 CH:I love the cutaway views of Vita’s place. Why did you choose to go this route for those pages?

RS: The script called for a cutaway view of the house. With the width of the house we had built in SketchUp, it just wouldn’t have fitted on the page if we’d drawn it entirely flat-on, so the only solution was to put it at an angle! Otherwise, there would have been a lot of wasted space or cropped-out house.

CH: I notice that there are a lot of great extreme angles in your artwork for Crowded. How does this connect to the mood and pace of the story?

CH: The inks in Crowded add a lot of gravity to scenes and remind me more of a noir future than round curvy future that Ro’s line works portray. What is most important, as an inker, in creating mood like this?

TB: That’s a hard one to quantify, honestly. I’ve been playing the job very much by ear, but it’s not accidental that the work I’ve been looking at the most for inspiration are the inks of Klaus Janson and Bill Sienkiewicz over John Buscema in early Wolverine issues. For CROWDED I’ve been trying to move my hand faster, be a little freer with the nibs, create something a little more angular than what Ro puts down, just to help sell the tension of the world she’s building.