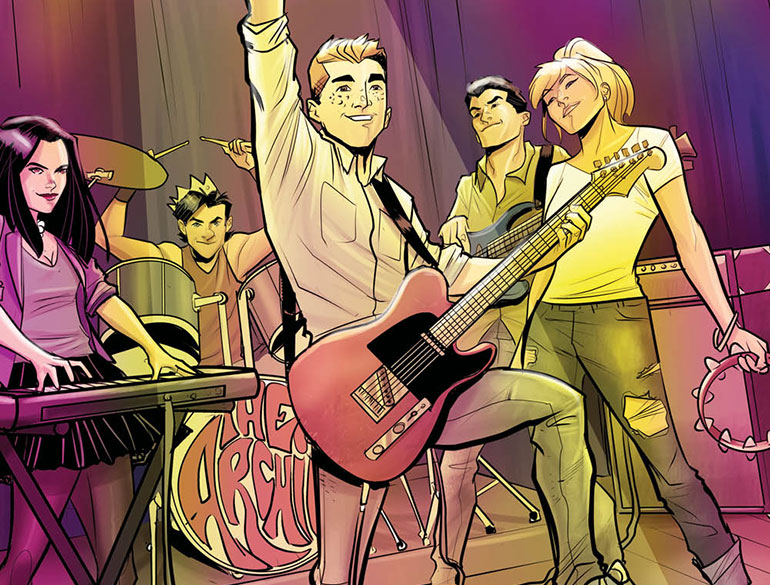 Not satisfied with meeting the Ramones, or just playing though a one-shot, the Archies — Riverdale’s second most awesome band (ha!) — are spinning out into their own ongoing series and hitting the road on tour. Driving that bus are writers Alex Segura and Matt Rosenberg, and artist Joe Eisma, all reuniting for a second run at it with Archie Andrews and the gang. Segura and Eisma sat down with Comicosity to chat about the new series, how each member plays off each other in the band, and what their dream musical team-ups would be.

Matt Santori: Congrats to both of you on the upgrade to ongoing for the Archies!

With the new launch, you’re not just taking the creative team on a new run, the Archies are hitting the road too… how does that bit of synchronicity feel for each of you?

Alex Segura: It’s great – though, I hadn’t really thought of it that way until you mentioned it, so shame on me.

Matt, Joe, and I poured a lot into the one-shot, and very much treated it like a pilot episode for a potential series, so it was really great to see that the fans responded to it in such a cool way. It’s really made us want to up our game and make sure we do right by these great characters we’ve been asked to write – not to mention the bands we have lined up for each installment. 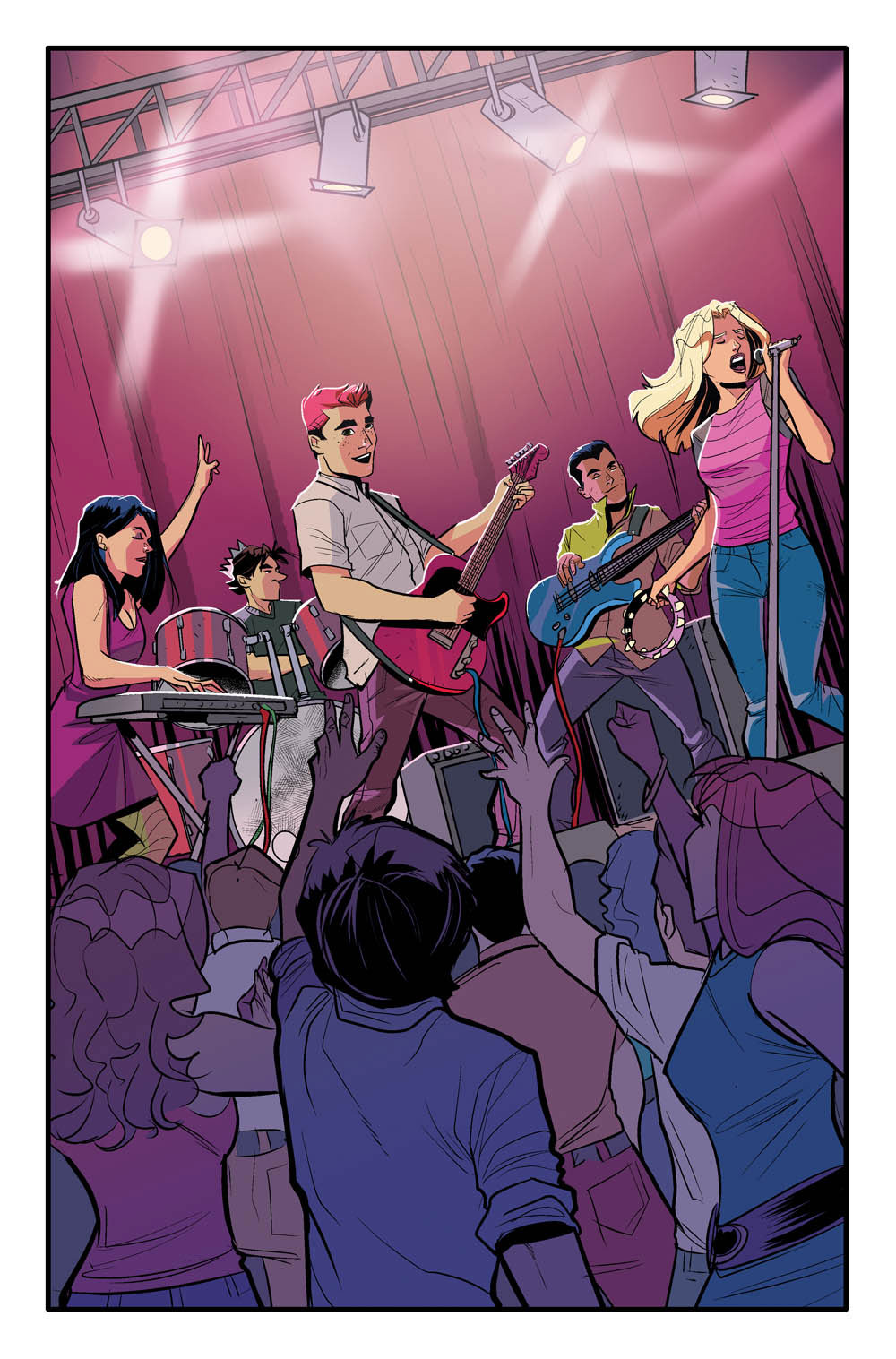 Joe Eisma: It’s great!  When we did the one-shot, it was probably my favorite thing I had done at that point with Archie. I’m elated we got upgraded to an ongoing.

There’s a shared passion between us for these characters and for this kind of story that we’re telling — you can really feel it when you read the finished product.

MS: Leaving Riverdale itself is a big step for this universe, and I think The Archies may be the only book doing that right now. And in some ways, Riverdale is a character in itself. How do you compensate for not having that natural environment at your disposal?

AS: The kids are leaving town, but the town hasn’t left them. They’re small town kids (except for Veronica, and even still, she’s been changed by living in Riverdale) being let loose on a larger world, so everything that happens to them is in a way a reaction to their experiences in Riverdale.

So while they’re not physically there, it’s still a part of their DNA. 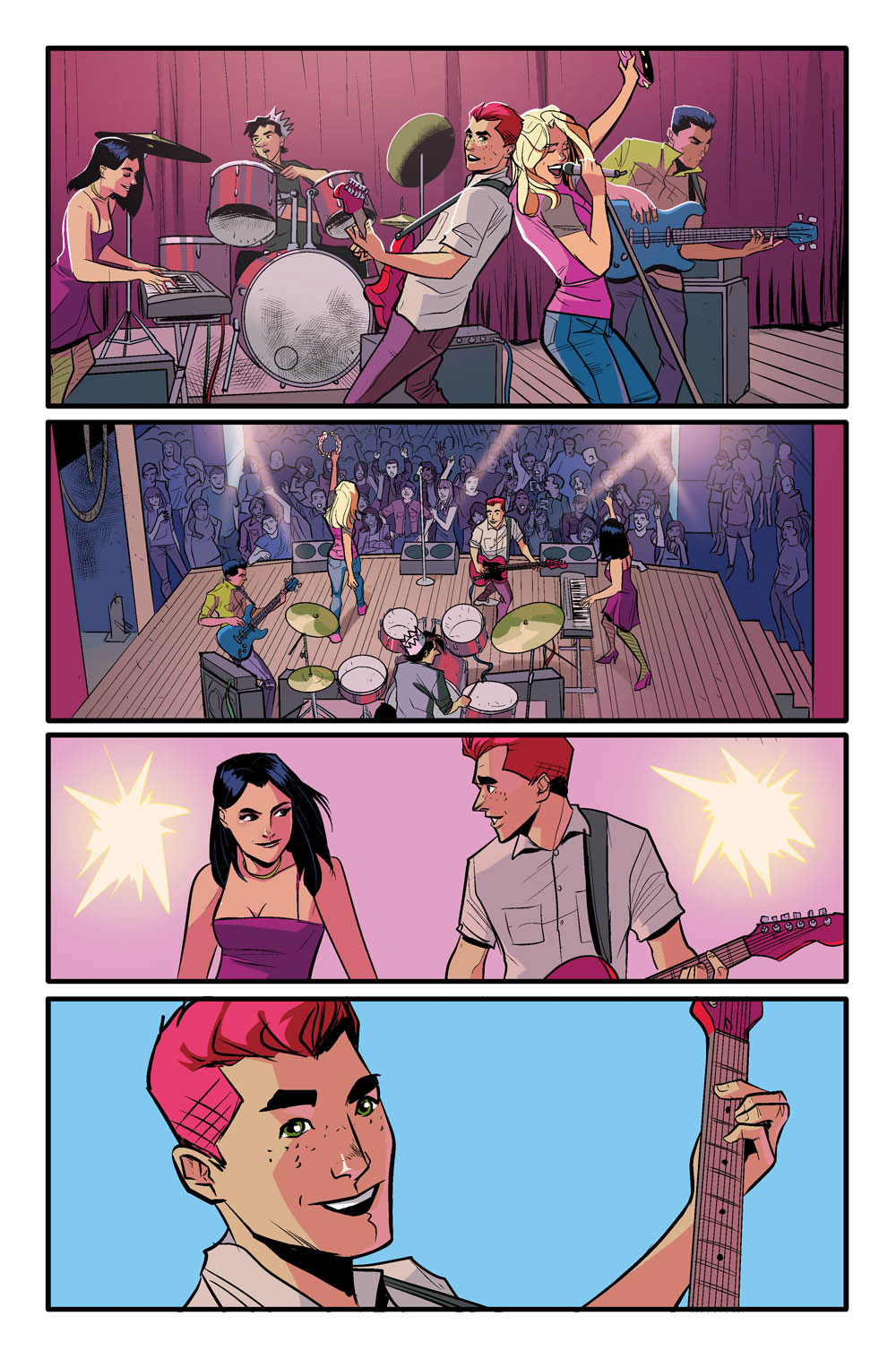 JE: It’s kind of liberating in a sense — to take these characters out of their ‘safe zone’ and having them strike out into the unknown. I think it’ll create an interesting dynamic with the characters, almost akin to when you leave home for college. Riverdale with always be with them, but they’re off to see the world now.

MS: Obviously, Archie is in the lead here, but no band is just their lead singer. Give me a rundown of what you think each member brings to the band.

AS: While the band IS called “The Archies,” I’m wary of just defaulting to Archie as the lead. He’s definitely been the driving force and de facto leader, but as anyone who’s been in a band can attest, those roles sometimes change as you actually get into the work of being a band. 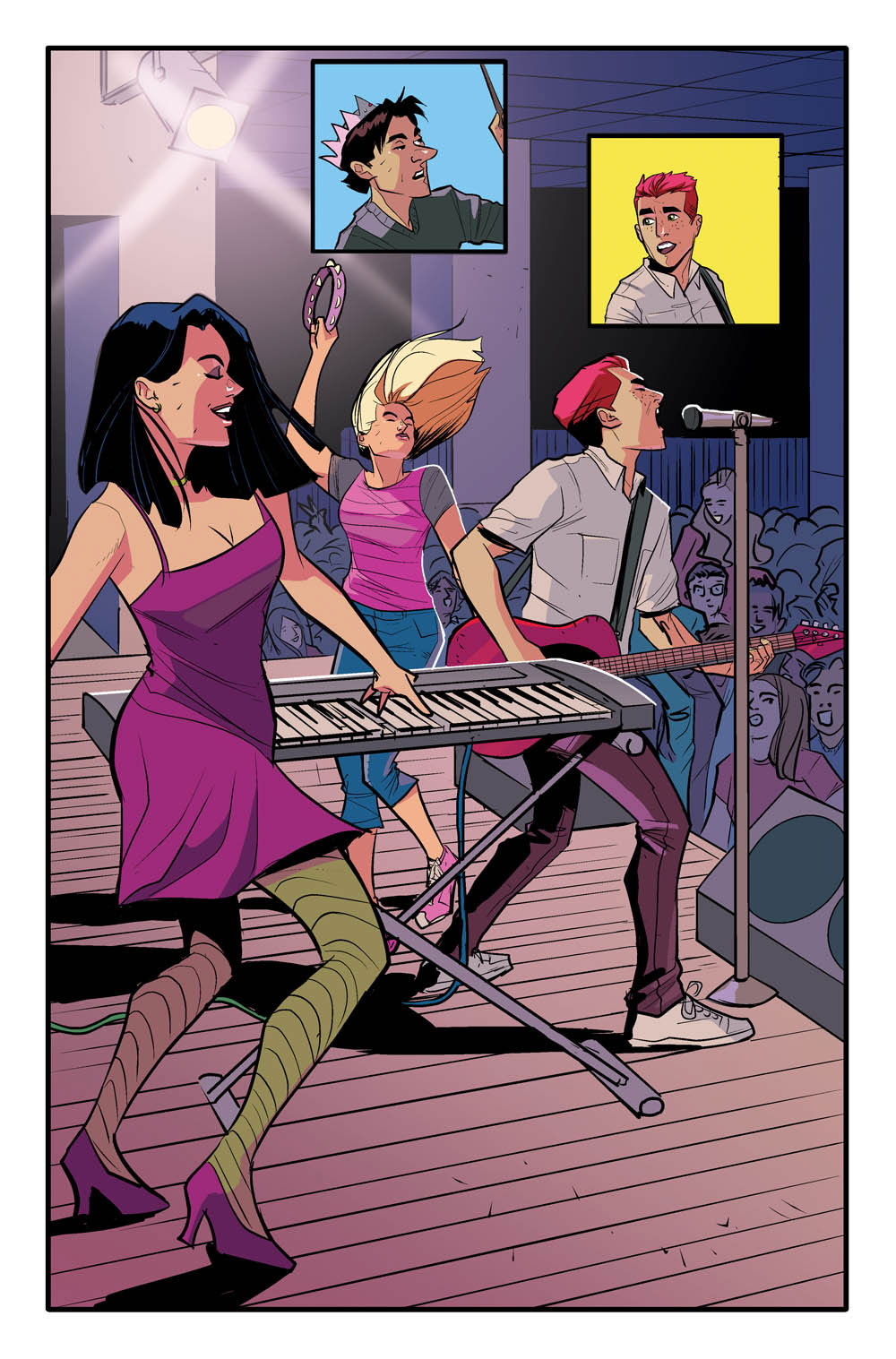 In my eyes, Betty is the member with the most potential who, while supportive of Archie, also wants to contribute creatively.

Reggie is very hands-on, and we’ll see him take on a pseudo-manager role.

Jughead is along for the ride, eager to spend time with his friends and may even be the most musically talented of the group.

Veronica likes the idea of being in a band more than the real thing, and she’ll start to grapple with that as we go along and some of the lifestyle things she’s taken for granted start to slip away.

JE: Jughead brings levity, but he really is the wisdom too. When Archie gets too far into the clouds, Jughead can bring him back down to Earth.

Betty’s the passion/the heart, Veronica the brains, and Reggie is the attitude — he brings the swagger and confidence you need to play in a band. 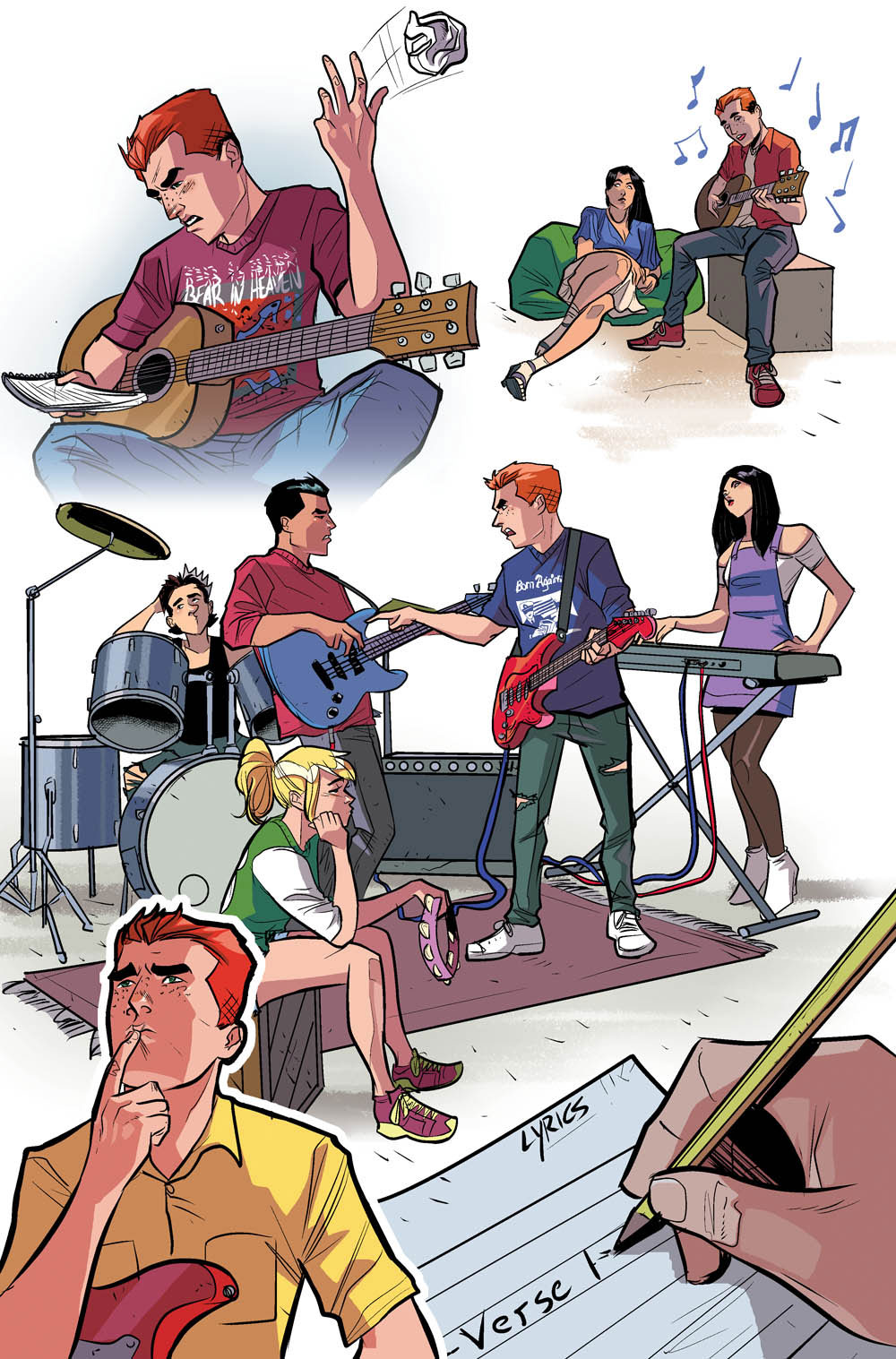 MS: In the process of hitting the road, the Archies is going to meet some big time bands. They’ve met the Ramones. CHVRCHES are on the horizon. Is this a dream or what? What can the band learn from these real life performers?

AS: That’s the question we have to ask before we put pen to paper on each issue. How does having band X work in the greater story? It’s like putting a massive puzzle together, and it’s been a lot of fun for Matt, Joe, and I to not only come up with cool, one-off tales a la RAMONES, but also make it part of a bigger tapestry.

It has really been a dream come true, and just wait until we unveil the next wave of acts meeting the Riverdale gang! 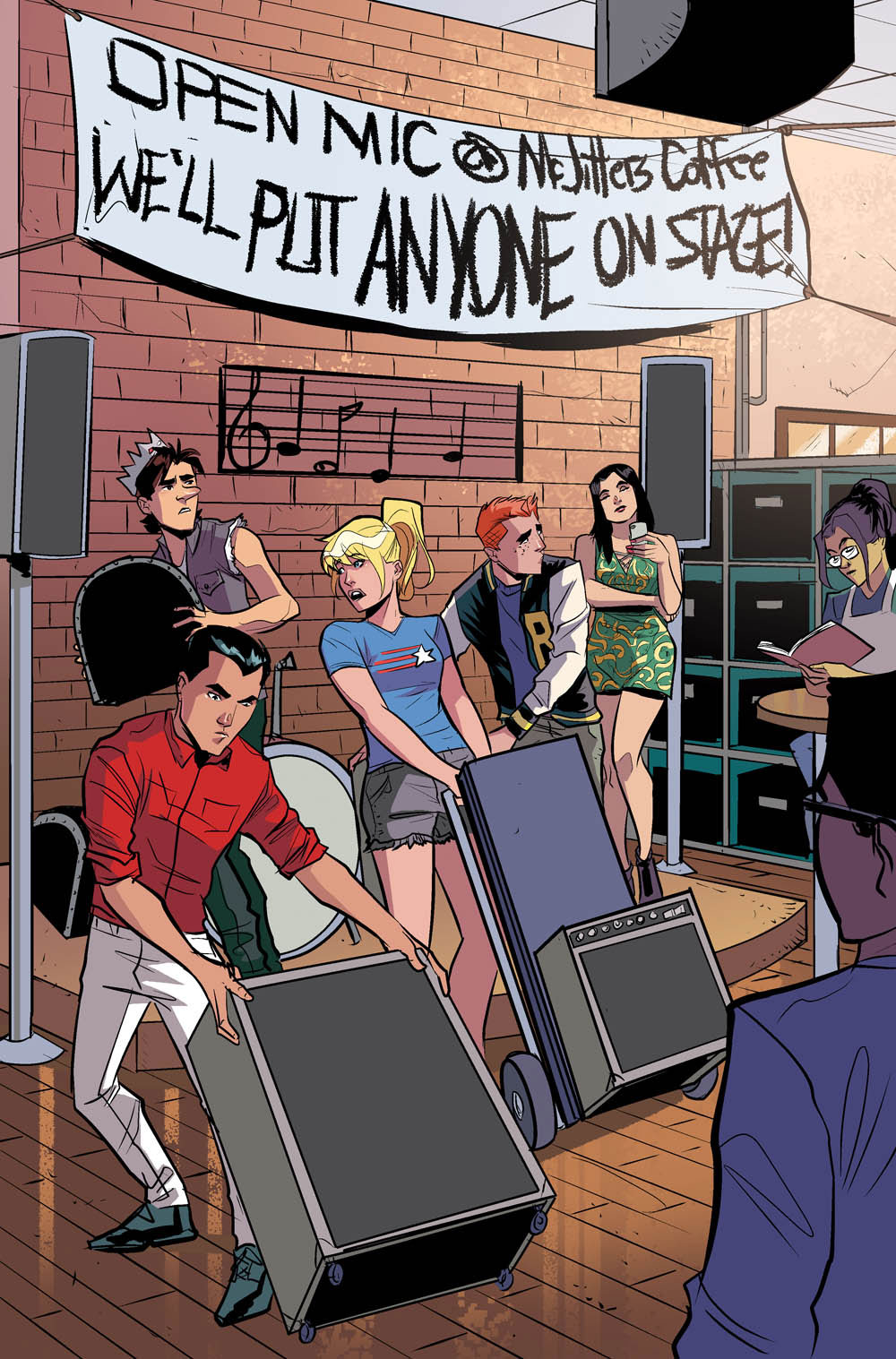 MS: What kind of challenge is it to capture the essence of performers like Lauren Mayberry and Joey Ramone on the comic page?

AS: It’s a challenge because you’re not just dealing with a fictional character. While Archie, Betty, and Jughead have long, printed histories that you can riff off, this is the first time some of these real acts have been portrayed in comics. So the challenge is, how do you try to evoke their real personalities while still telling your story. It’s been more fun than difficult, which is great.

JE: It’s very challenging. I want fans of these acts to not only recognize their faces, but their personalities as well.  I watch a lot of performances and interviews with the bands to get their mannerisms down. I want CHVRCHES and their fans to be able to really feel like the band are there in the book.

MS: If you had your druthers, what band would each of you recruit into the book — era-nonwithstanding — and why?

AS: I’d love to have Talking Heads show up. Fingers crossed. 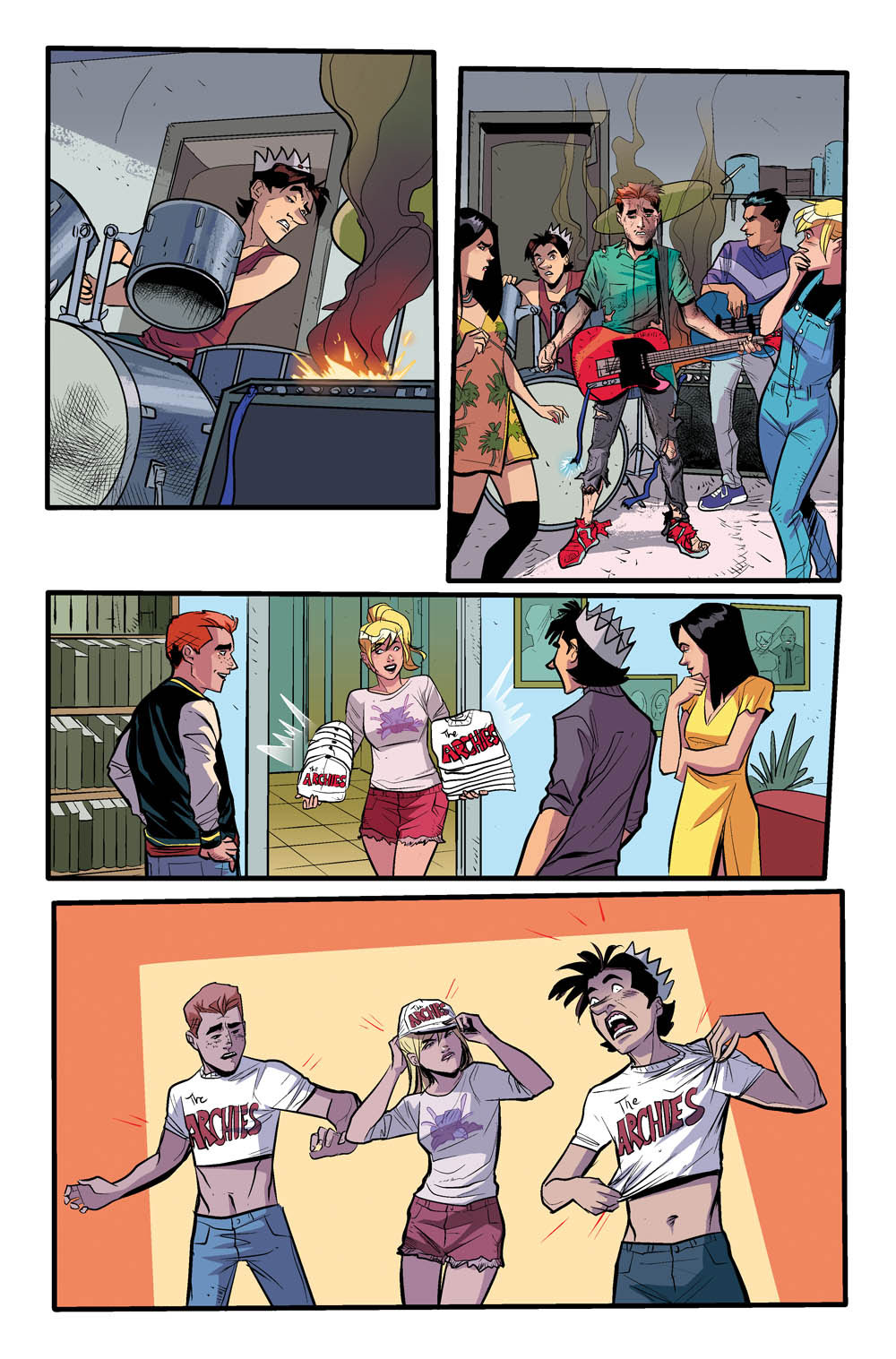 JE: Babymetal! The first time I heard Babymetal, I was blown away by the boldness of their approach. When I heard the hook for our book, I immediately thought back to the New Scooby Doo movies, where the Scooby kids teamed up with bands/actors and whatnot.

A Babymetal/Archies teamup could be crazy fun like that.

MS: Any final thoughts or special teases as The Archies comes close to hitting stores once again?

AS: We hope fans dig what we’re doing, and enjoy the take — which is much more grounded and heartfelt than the classic Archie stuff Matt and I have written. While the big, splashy stuff involves real bands and rock and roll, the heart of the book is about friendship and how important it is.

JE: I just want to thank everyone who has supported this book! This is one of those rare dream gigs that pop up in comics, and I’m glad people are digging this enough to allow us to do more.  Hope you’ll enjoy what we have to come — some really great bands coming up!

Alex Segura, Matt Rosenberg, and Joe Eisma bring The Archies back to comic shops this October! Pre-order at your shop today! 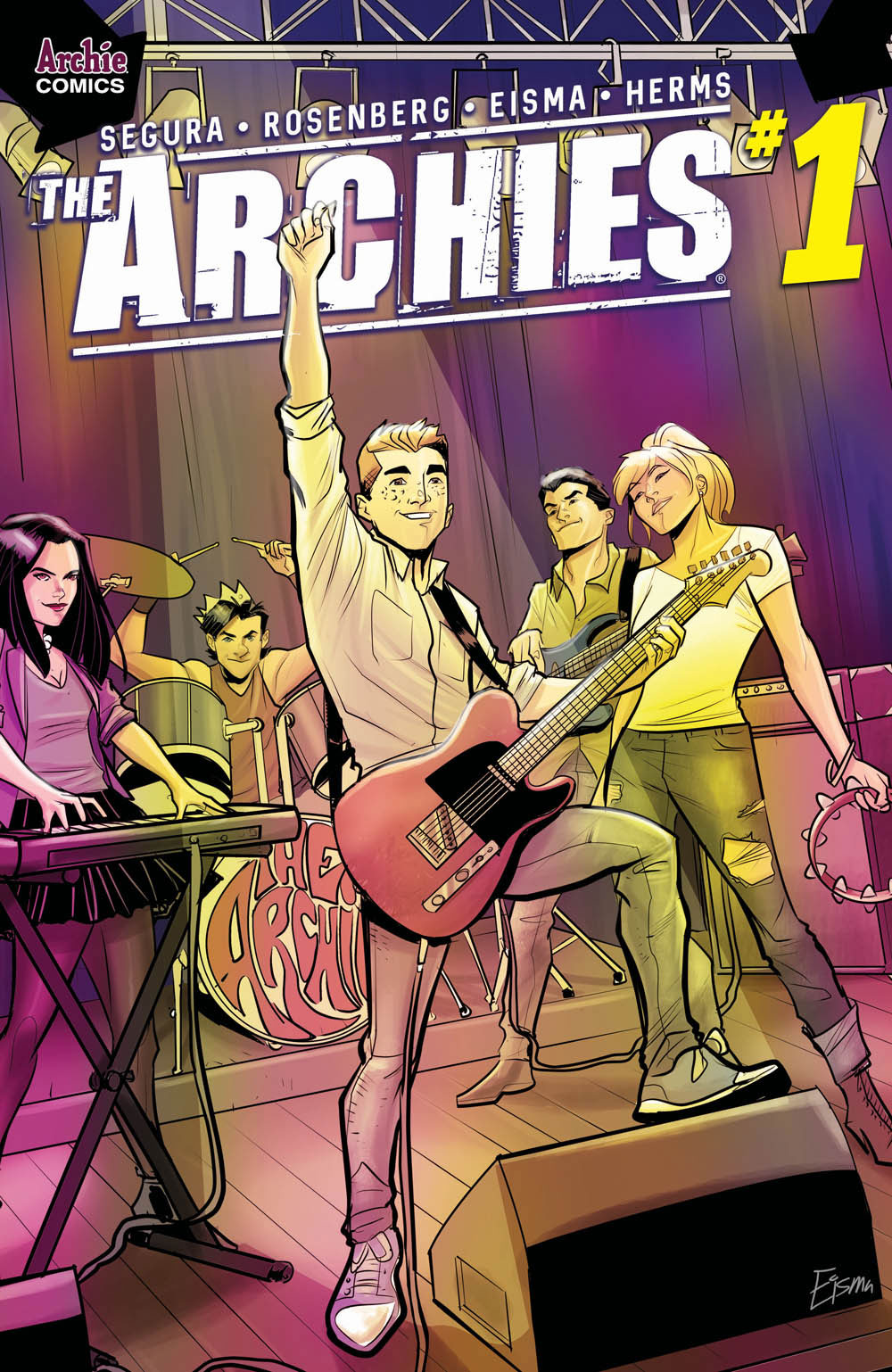 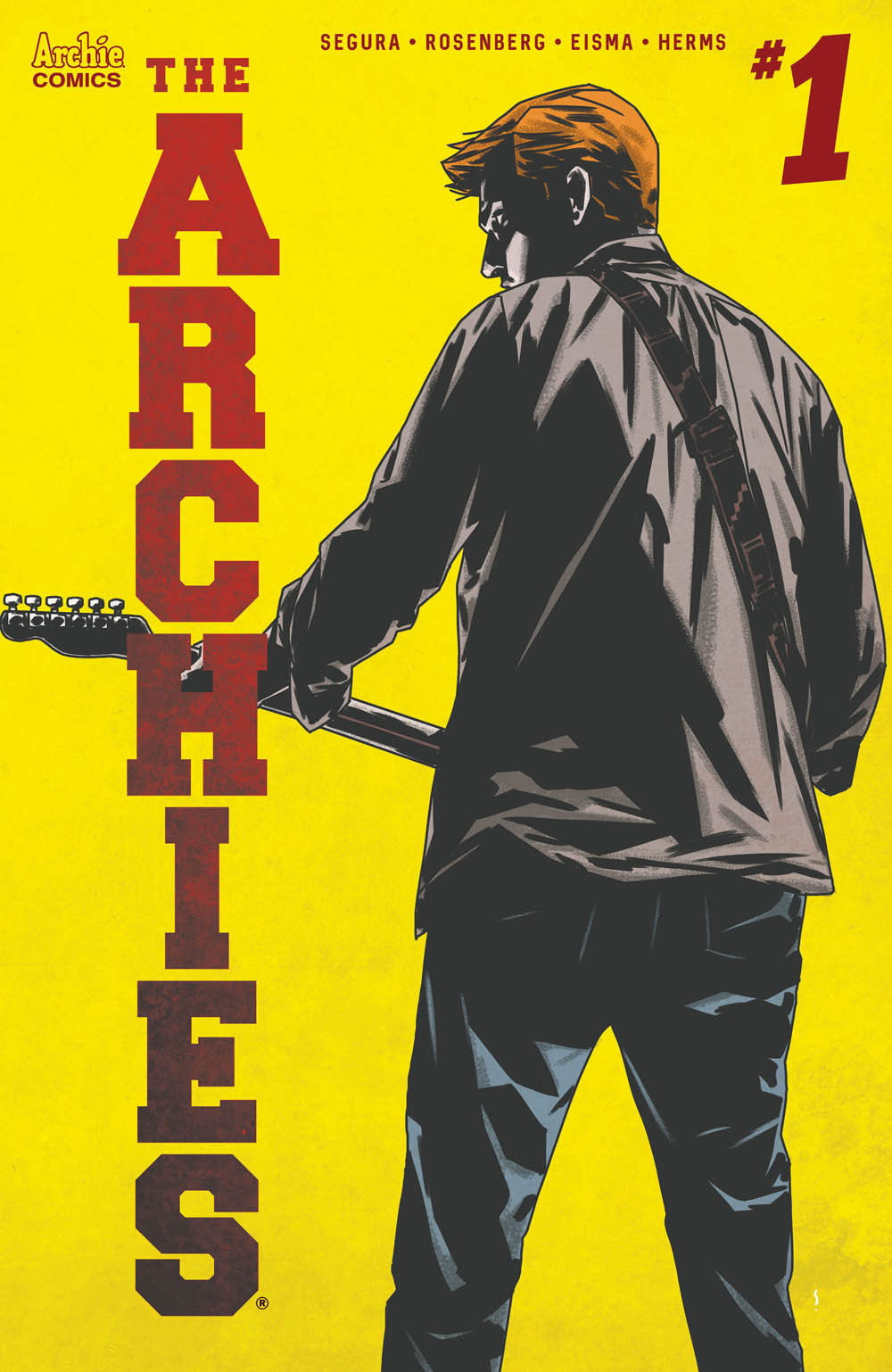 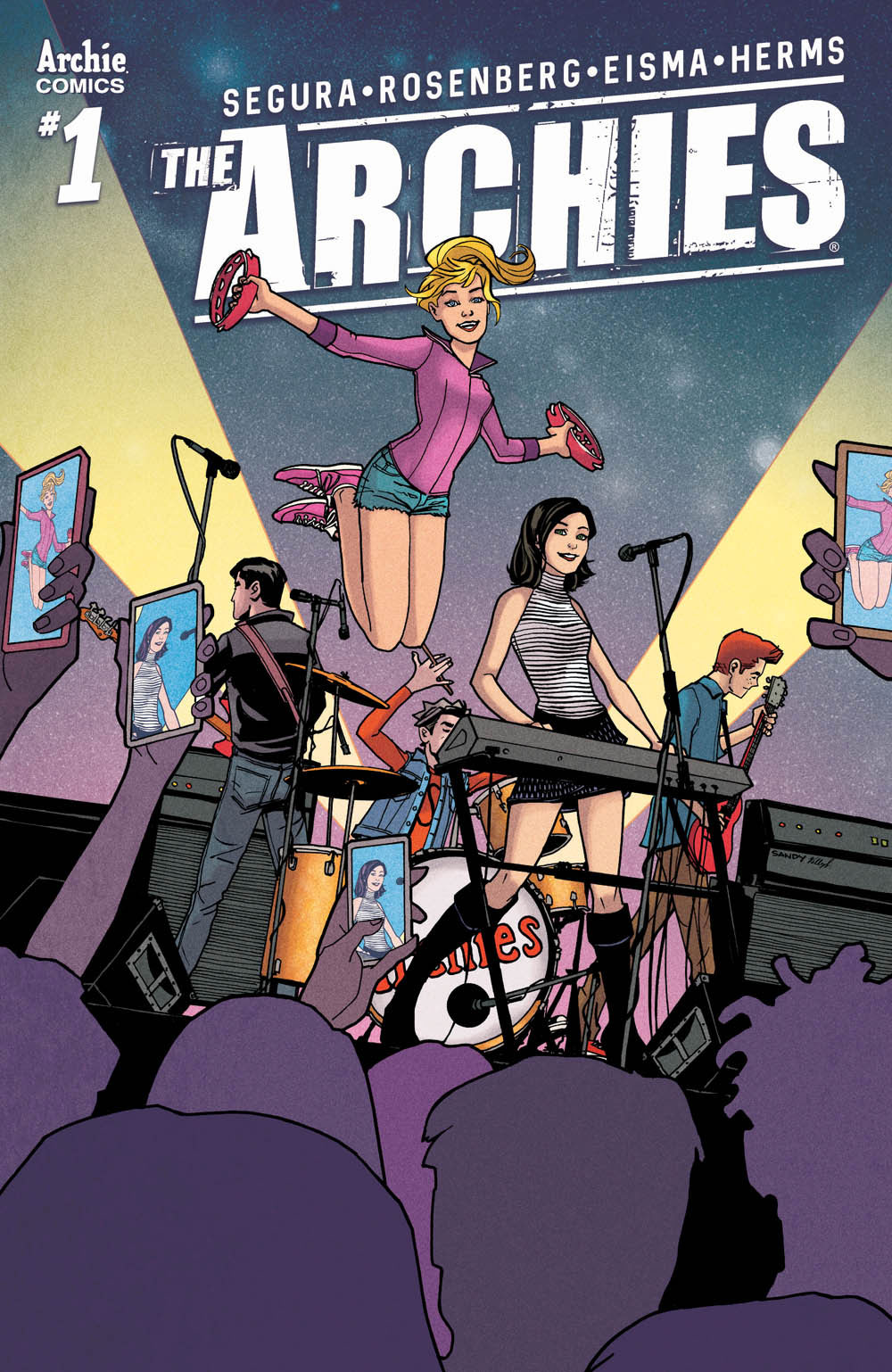 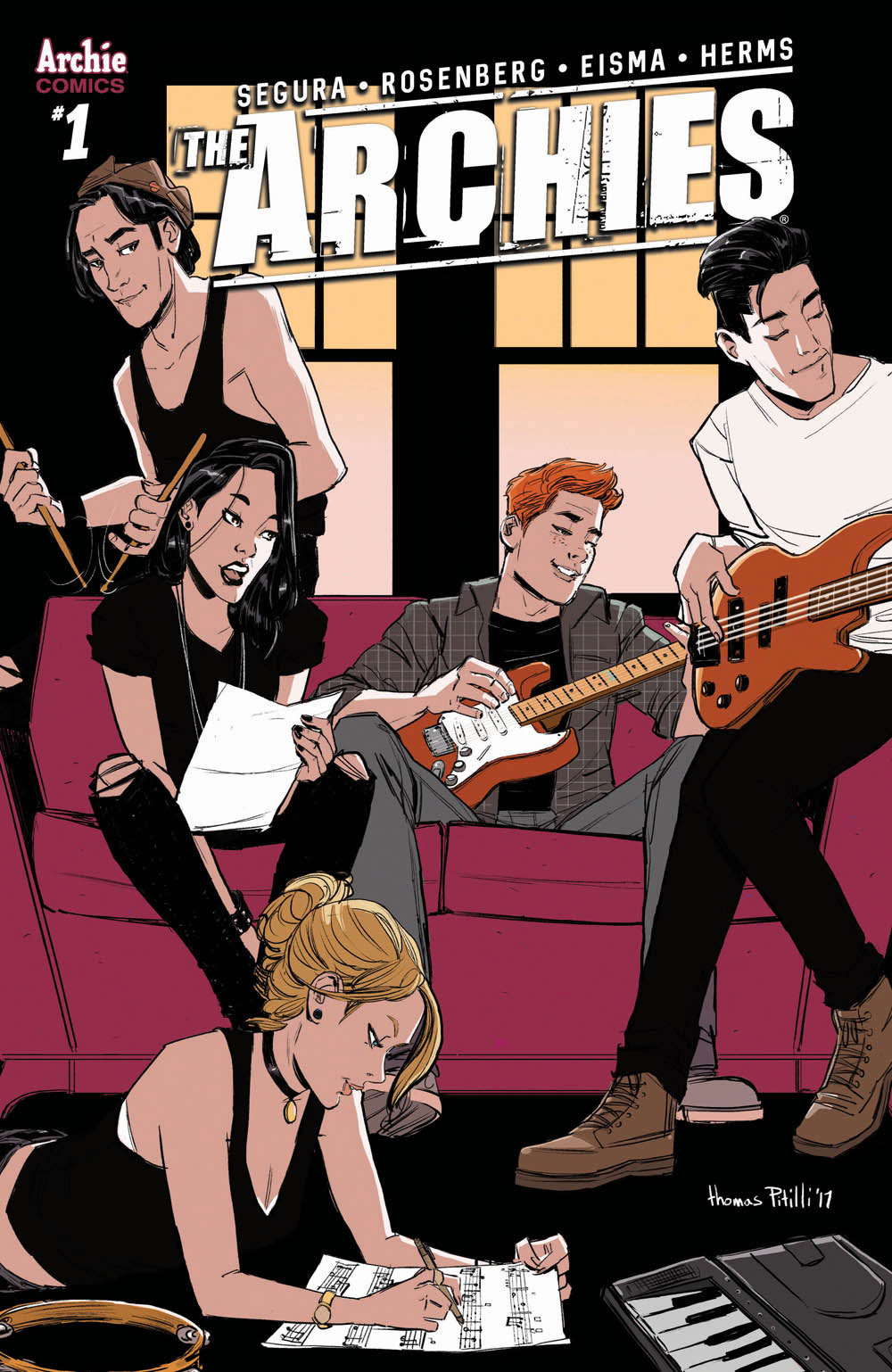 THE ARCHIES #1
What’s next for the teenage rockers The Archies? When someone makes a decision that leaves the rest of the band scrambling, can the group keep it together? It’s friendship vs. fame in this must-read #1 issue to the new, ongoing THE ARCHIES series!