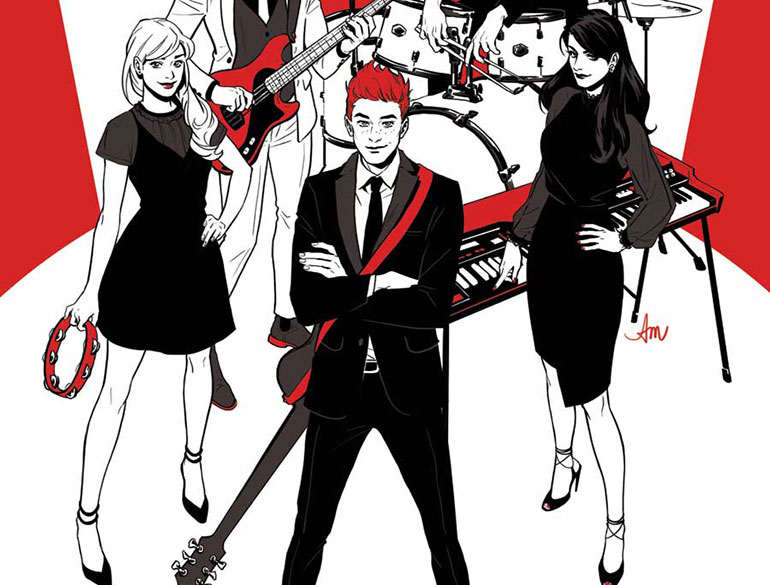 Archie Comics has been exploding the last few months, taking the comic market by storm and now network television. But they’re not done experimenting yet. The latest in a series of one-shots designed to serve as pilots for potential ongoing series, The Archies narrows in on the gang as they pick up instruments and become something more.

Here to tell us all about it are one-shot co-writers Alex Segura and Matthew Rosenberg, who talk a bit about coming off their work on The Archies Meet The Ramones, exactly what the Archies sound like, and what it’s like working with artist Joe Eisma — who may also show up to share a few of his thoughts!!

Matt Santori: Focusing on The Archies for your May one-shot must be something of a perfect fit after writing The Archies Meet the Ramones! What are you bringing with you after that experience and what are you leaving behind?

Alex Segura: That’s an interesting question — I guess we’re bringing the Archies and leaving the Ramones behind!

But seriously – we’re trying to bring some of the fun and energy from that story while also adding in the tone of Mark Waid’s epic Archie run. Matt and I were really striving to keep this story as a down-to-earth and fun adventure, so there’s no time travel or magic. It’s really about a guy who wants to play his songs with his friends and somehow gets lost along the way, and this is about his journey back and what that entails. 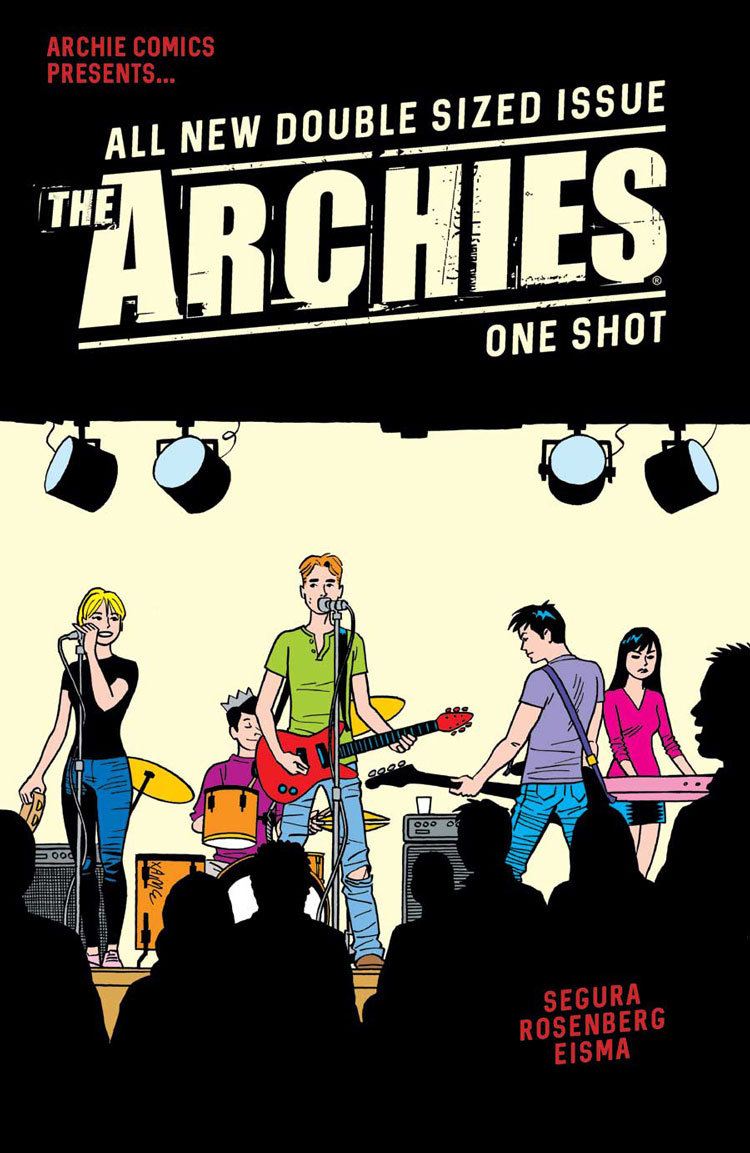 Matt Rosenberg: Well, obviously we are leaving the Ramones behind. That’s a big one. But in all seriousness, we wanted to really explore the formation of The Archies, how they came together, and why. Alex and I had already put a ton of thought into what being in a band means, and more specifically what being in The Archies means for that book.

We touch on some similar themes here, but this is just a real love letter to the number one band in the Archie universe. We wanted to explore them a bit more, go back to their origin, and put the spotlight firmly on them.

MS: The traditional group of the Archies are Archie (duh), Reggie, Veronica, Betty, and Jughead. Do they all bring the same level of talent and interest to the endeavor as Archie, and is that an issue?

AS: They all bring in different elements, and this is about how those pool together to form a band. If you’ve ever been in a band, you know that it’s a unique, almost magical union when it works, an unmitigated disaster when it doesn’t – but either way, each member brings in something essential, even if it isn’t a major component like writing songs or singing. Every element is hugely important, from drums to bass to guitars to keys. 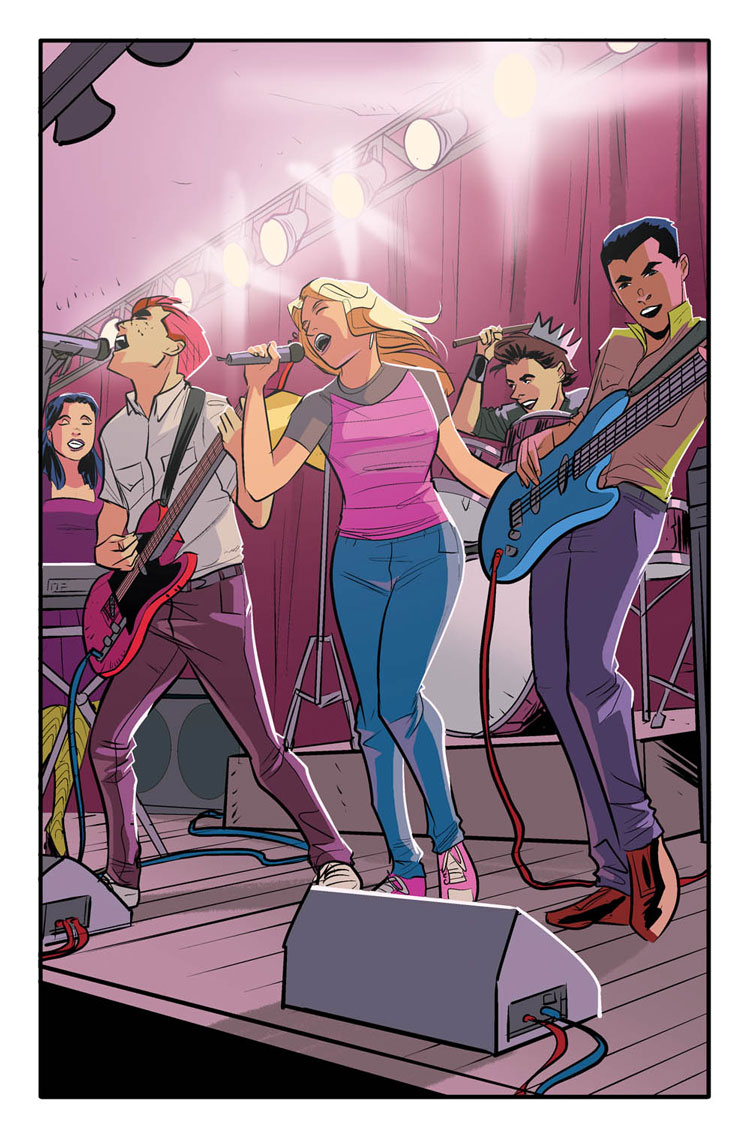 MR: I feel like everyone is passionate about the band, otherwise they wouldn’t be there. Different people are just looking to get different things out of it. Where Reggie wants to be in control and make it about him, Archie has to learn to want the opposite. Betty wants to be part of something fun and cool, and Veronica wants to be the breakout star.

And Jughead just wants to hang out with friends. It’s both a problem and it’s the tension that holds them together in the end. Great bands come together because every piece is different, like a puzzle. And the Archies are the archetypal great band.

MS: Archie isn’t just the lead singer. He’s also the songwriter behind the band. What are your thoughts on that creative process, especially for someone as young as Archie?

AS: Archie’s stories have always been comedic with a touch of teen drama, so there’s a lot of material there for him to sing and think about, and our story doesn’t shy away from that or avoid the realities of teenage heartbreak. But we also focus on the fun of being in a band – and how easily being in one can go off the rails!

MR: I like to imagine that Archie writes a lot of songs that express sides of himself that we don’t see in the comics so much. Either that or all his songs are for a concept record about the Afterlife With Archie universe that he thinks he made up. 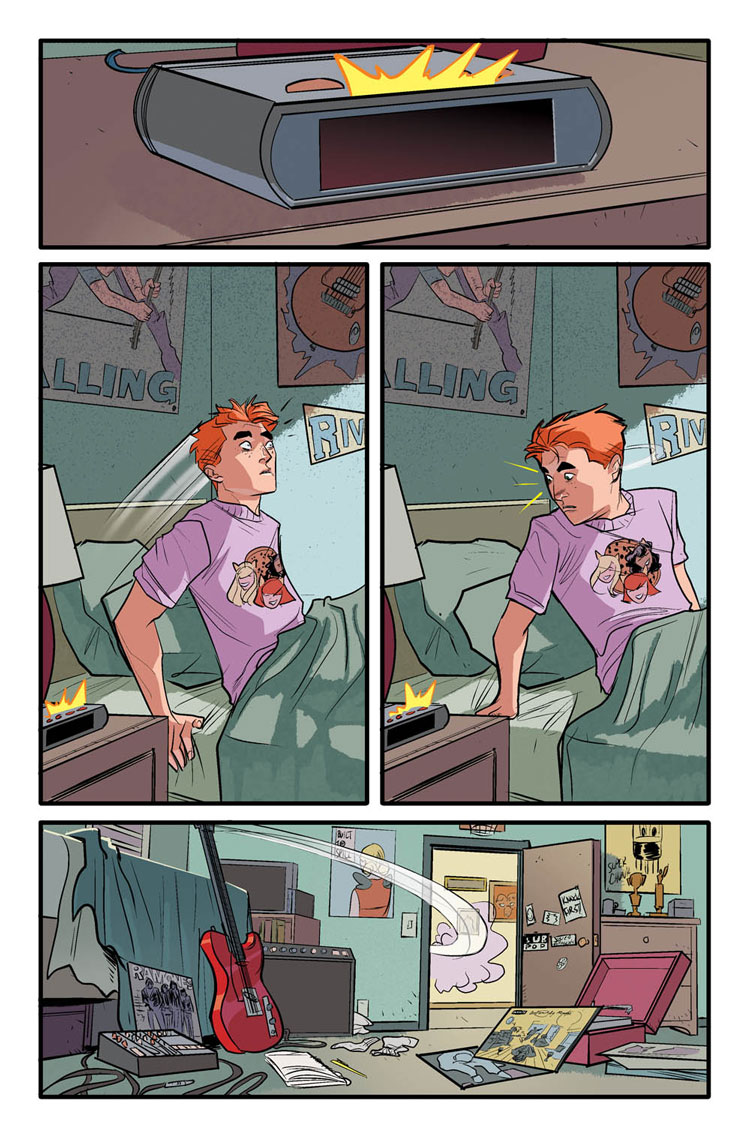 MS: Alex, you are pretty legendary on the internets as a music fan. What are your influences for who the Archies would emulate, are they the same as Archie’s own, and what do they SOUND like?

AS: I’m basking in the glow of being “pretty legendary” at anything! Ha! In my head, they sound like Imperial Teen or Rilo Kiley, I think.

MR: I think one of the things about The Archies is that what they sound like will be very defined by what readers want them to sound like. I hope people hear a band that they love when they read our book.

But if there was a band I’d say they emulate it’d be Guided By Voices, but with less beer. Just really making music that is raw and weird and accessible and honest. Writing songs like they can’t stop themselves. And it’s so catchy.

As for what I personally think they sound like? I think it’s a lot of stuff rolled into one. The garage rock feel of Cheap Trick or the 101ers. The captivating presence that can quiet a whole room of Kendrick Lamar or The Mountain Goats. The bubblegum bite of Ramones or The Buzzcocks. The urgent songwriting of Superchunk or Cayetana. The emotional honesty of Sun Kil Moon or Waxahatchee. And just the unbridled energy of Joyce Manor or Ceremony. Basically, they sound like a ton of stuff all rolled into one. And sure, I think they listen to all this stuff. 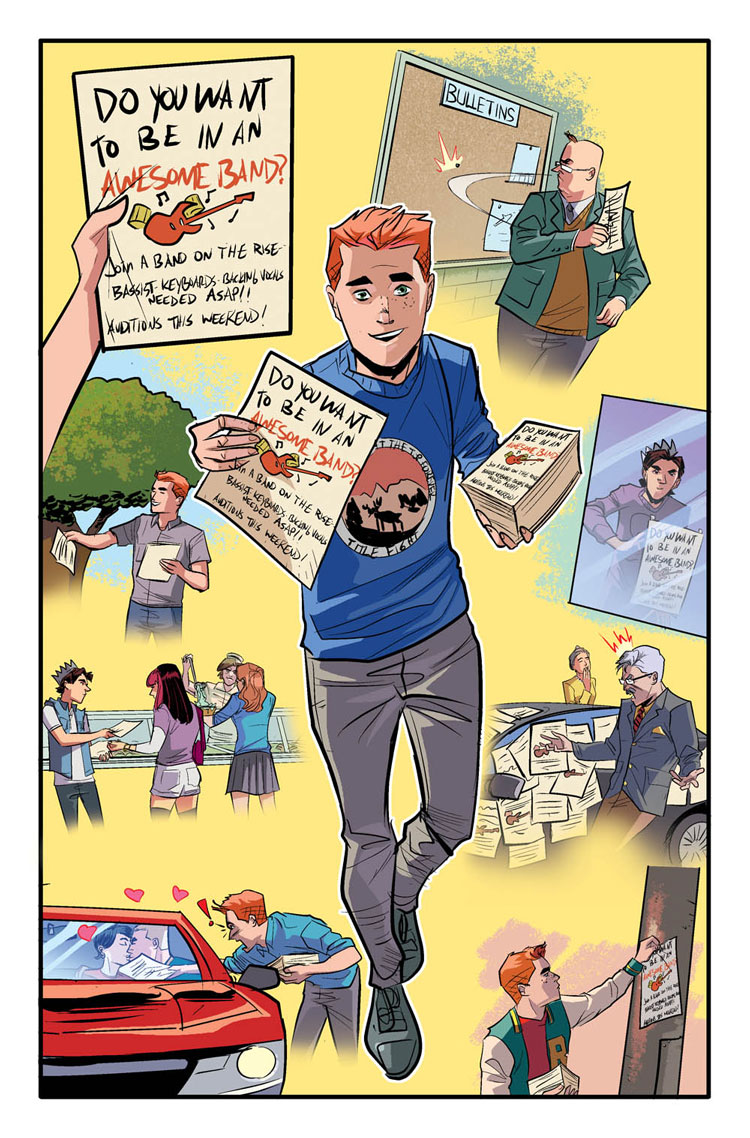 MS: You’re working with artist Joe Eisma on the one-shot, as he comes over from the main Archie title. How has that collaboration been going and what is Joe bringing with him that’s similar and different?

AS: I’ve loved Joe’s work for a long time, so it was great to finally get the chance to collaborate with him. Matt and I really tried to tailor the script to what we thought were his strengths, and he did a stellar job. Having him jump from the main ARCHIE book to this really elevated the book and made it feel like it “counted,” if that makes sense.

MR: Joe is amazing. I’ve been a fan since I first saw his work on Morning Glories. He is a great, clean storyteller with a cool style, who can handle action really well. But I think the thing that Joe is really bringing, that we needed the most, is the sense of real characters. His characters look and feel human. They act, the emote, and they just make you feel like you know them. It’s a hard talent to quantify, but you see it in all of Joe’s work. You read it and you just feel like you are in the room with his characters. 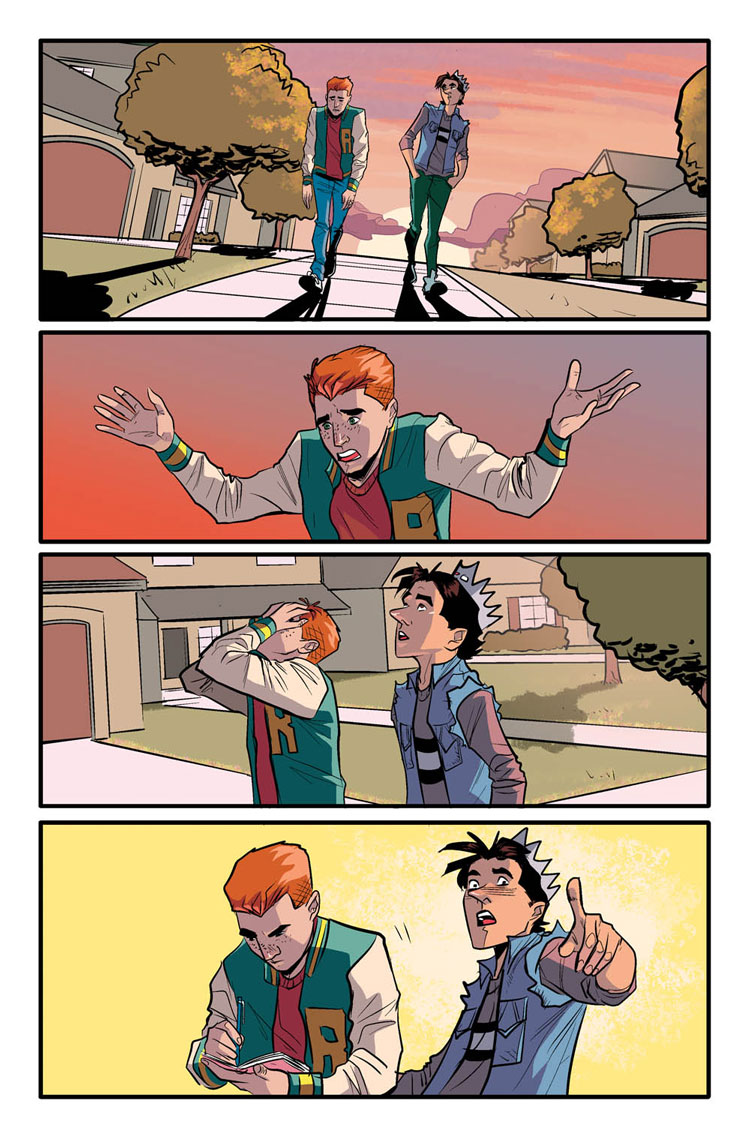 MS: These one-shots Archie Comics are producing seem like perfect pilots for ongoing series. What would be your dream next step for the Archies if the book takes off?

Joe Eisma: I’d like to see them do a tour — see how they function on the road.  I think you’d have some great opportunities for drama and for them to encounter some interesting characters.

AS: We’ve talked about it, and I think we’d all love to keep doing The Archies stories. I think the next step for the band would be figuring out a dynamic. That first show is always euphoric, but after every high there’s always a valley…

MR: Well, I am sure everyone has a different answer. But I’d love to do a book about the Archies on tour. A new town in every issue. And just be honest with what that is like- meeting new people every night, crazy drives, sleeping on people’s floors, having the best shows imaginable and the worst. I think the tension and drama inherent to touring is something so few books, movies, or tv get right. They try to make it flashy, sexy, and something it isn’t. I’d love to do The Archies on tour and just show what happens when the five of them get out of Riverdale and meet the world. 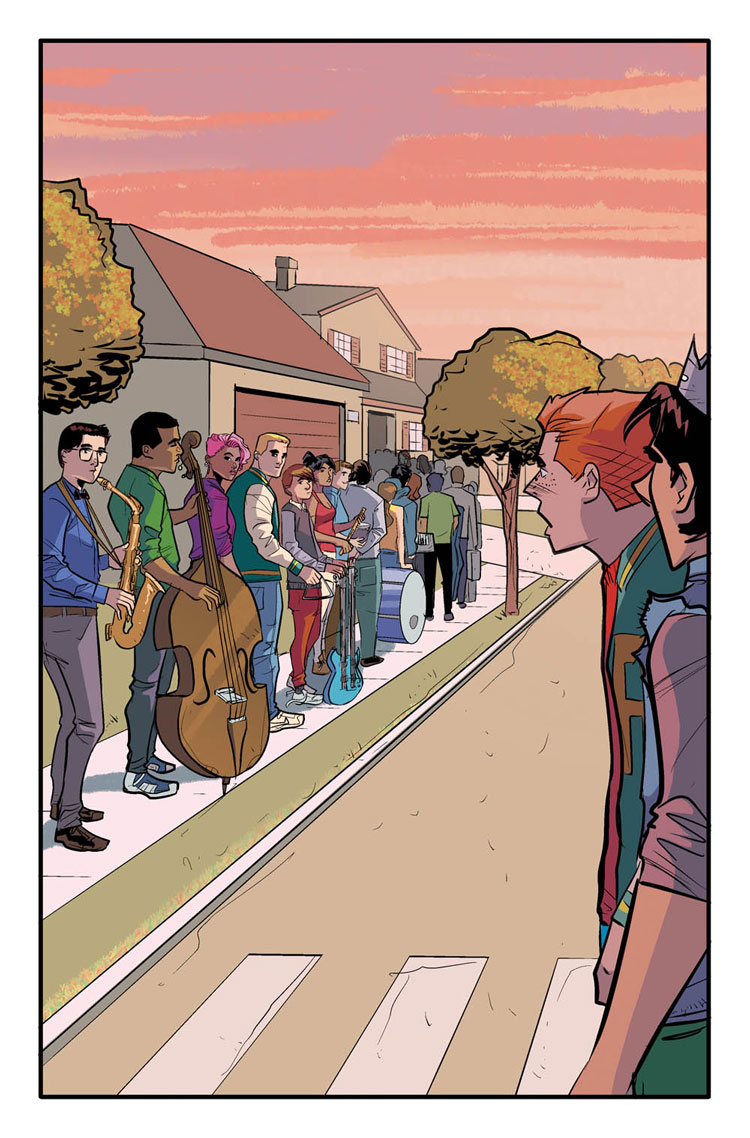 MS: Any other thoughts or special teases for the fans in advance of your The Archies one-shot?

AS: This issue is chock-full of cool Archie cameos, including the Archie reboot debut of a beloved Archie teen!

MR: I just really want to thank everyone who is going to pick this up. We put a lot of work into it and I hope people think it’s as fun as I do.

JE: There were a number of obscure characters in this book that I think longtime Archie fans will be happy to see.  And all sorts of Easter eggs of bands we all like. 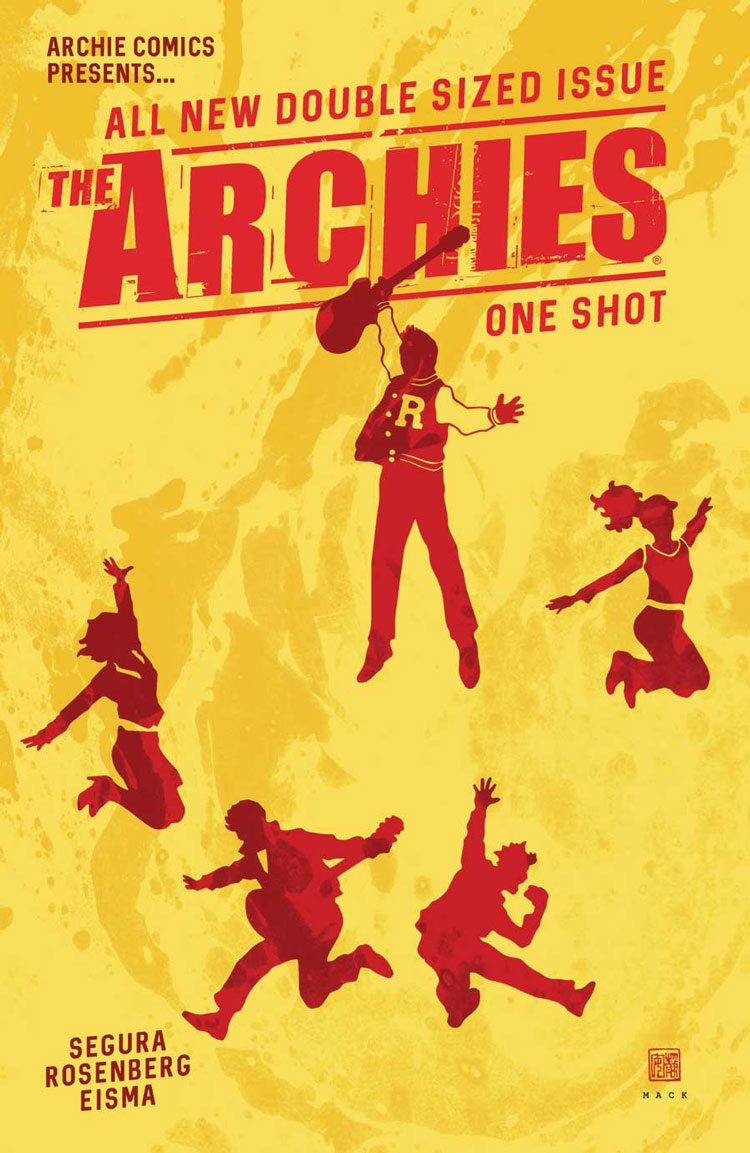 Archie Comics releases The Archies one-shot on May 24, 2017.