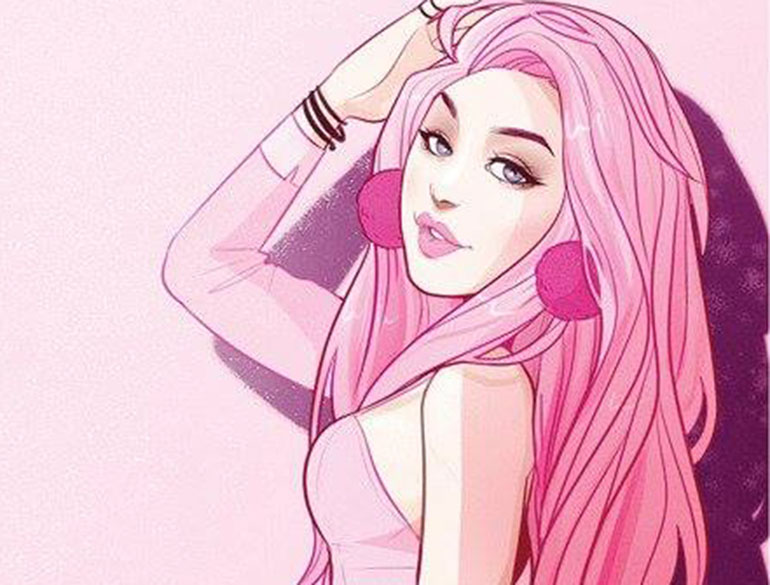 Social media is a huge part of our lives, whether directly or tangentially. What if one of the most accessed and accessible forms of media was a convenient cover for criminal activity?

In Pat Shand and Emily Pearson’s Snap Flash Hustle from Black Mask Studio, we get to see firsthand how people can make a living through these platforms and what may lurk underneath their posts. Comicosity got to pick these creators’ brains to see what they were up to and what this could mean for the story as it progresses. 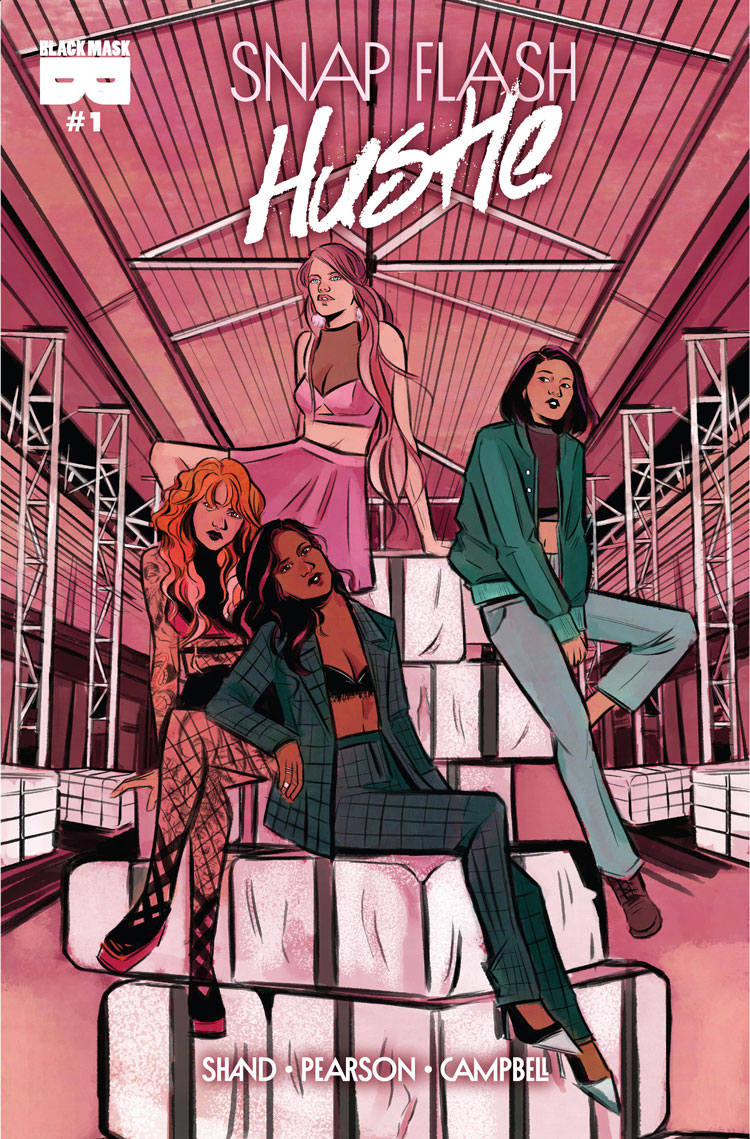 Allen Thomas: There are a lot of intriguing ideas in Snap Flash Hustle. What did you want to express through this comic?

Pat Shand: Hey, first of all, thank you for having us. Snap Flash Hustle is a passion project for both of us, so we appreciate everyone highlighting us and signal boosting. We want this book in as many hands as possible, because the way I personally approached it was something I feel most human beings can relate to.

The core of the book is about debt. What debt does to us and the things that we’ll do to escape it. Our lead character, Haley, has always known she was going to be an art model. There was never compromise, never any other way. Part of what we’re playing with here is the question that I think a lot of my fellow comics creators ask themselves: “How can I create my art for a living while not bankrupting my family?”

Emily Pearson: I think Pat does a great job of showing the kind of desperation that a freelancer can have at times. There was a line that definitely hit home for me that Haley said, “I’m trash at every other job I’ve done besides modeling and I still can’t make enough money to buy a coffee from what I do.”

AT: What was behind your decision to use social media as a cover for criminal behavior?

PS: No one fully understands – even if they say they do – the monetization of social media. No one has it down to an exact science. That’s why you’ll see someone who has “Social media expert” in their bio has like 56 followers. Because this is a new and ever-changing market, I saw it as essentially the perfect way to hide illegal income.

There are some models who make six figures, maybe more, through avenues like Patreon, brand deals, personal subscription sites, Snapchat subscriptions – and then, there are some who will make three dollars a month. It’s the perfect place to launder money because no one gets it. I wanted this to seem real, so I really tried to work out all the potential flaws in the business. 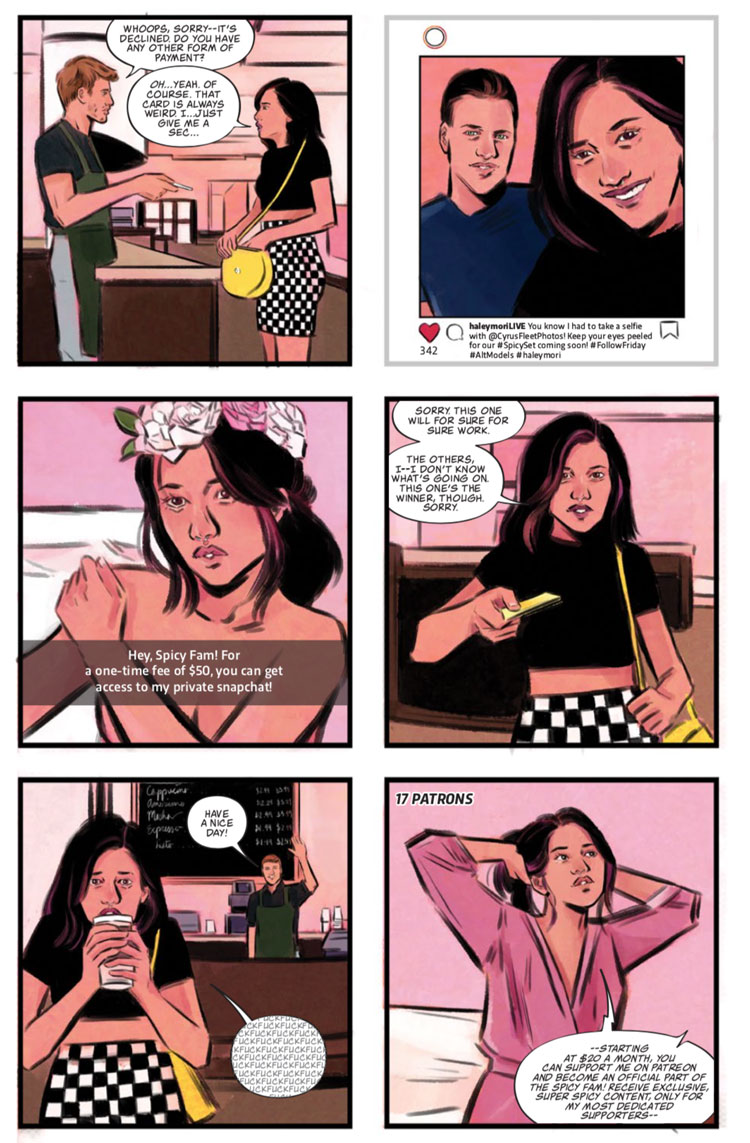 AT: Sex work through social media is a major feature of this story. How do you take care to portray characters with a sense of humanity and realism?

PS: My wife Amy is an art model (and writer), and through my years of knowing her and seeing her creative endeavors, I feel that I’ve lived a lot of this. A lot of my writing is asking myself “How can I contextualize this life experience in a creative way?” That covers the realism part of the question, but as far as the humanity, that’s about empathy.

Creators should always write with both empathy and nuance if they look to create real and well-rounded people. Amy and I have both met all kinds of people in this field, have had all ranges of experience, so there’s simply a lot to pull from, a lot of people to care deeply about, a lot of people who are intriguing in so many ways. But yeah, it’s about empathy.

EP: One of the great things that Pat has managed to achieve through this is showing a nude model’s life and work while keeping the focus on Haley, her life, and how she’s feeling. If there was anyone else writing this, it could’ve slipped very easily into an “adult” book, but Pat manages to keep it character driven. It’s great, because we don’t get a lot of stories about sex workers, or people that do nude modeling for work, and Pat shows it wonderfully. 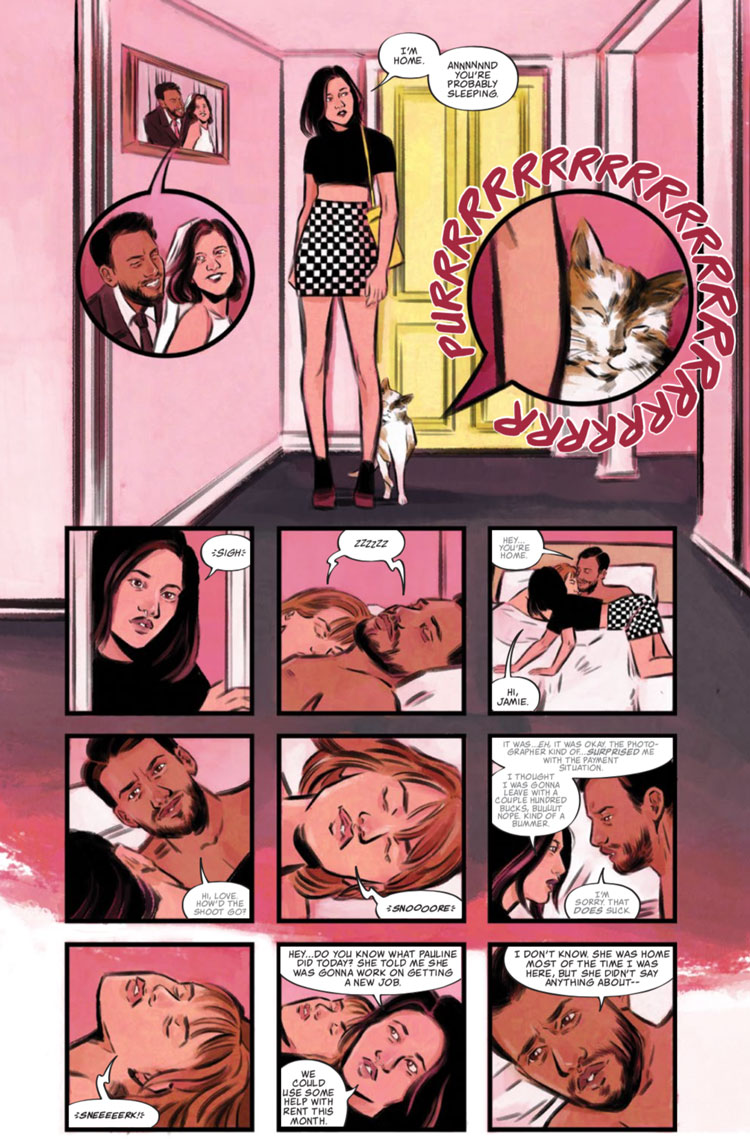 AT: Queerness, polyamory, and sexuality are on full display in Snap Flash Hustle (and that’s awesome). How do you plan to weave aspects such as these into the story as it progresses and what does that mean for the characters?

PS: Haley is polyamorous and bisexual, yeah – she’s in a triad with her husband Jamie and their girlfriend Pauline. Again with this one, just pulling from life experience here. There was a time where I was searching for media that portrayed the poly lifestyle… literally at all, hahaha. And there’s not much out there.

Haley’s family life ties more into her character arc though than into the plot – I didn’t choose her sexuality to have an impact on the story itself, though. I wanted Jamie and Pauline to be every bit as real and nuanced as Haley, with their own life happening between the scenes. 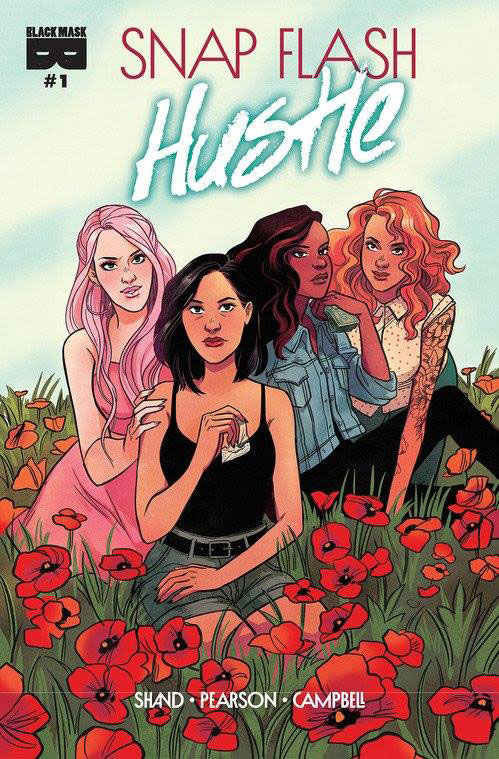 AT: The twist at the end of the issue is mind blowing. What exactly is Coral up to and what will we see from her in the future?

PS: Hey, thank you very much. That was pretty much me wanting to pull off a twist that was rooted in character rather than plot. I’m glad it works for you. So many twists are “Hey wait, the book you’ve been reading that’s been normal for 21 pages… TWIST, it’s actually supernatural!” Or someone is a superhero suddenly, something like that.

I wanted to build a character one way, showing her interactions in the context of a group, and then completely reverse that and show her true self when she’s in her element, on her own. Coral really gets her time to shine in the second issue, when she works out a few issues she has with Drew, her direct superior. 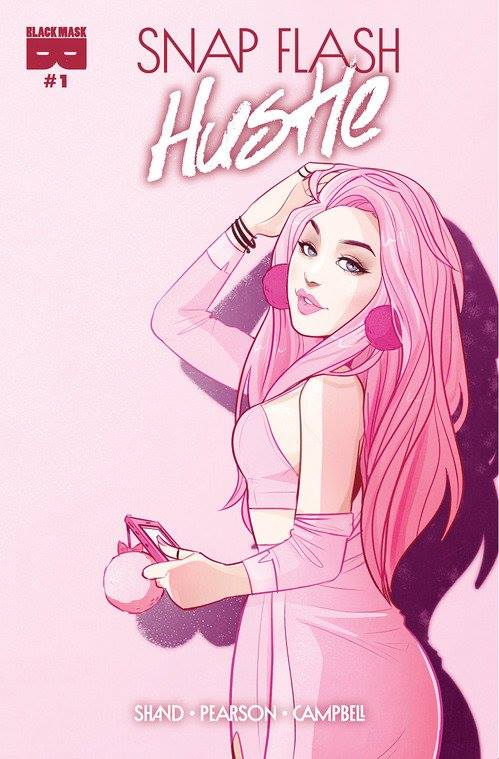 PS: I appreciate you having us. I just can’t wait for the issue to be released. Emily’s art blows my mind every time I see it. She’s creating something with these pages that looks like nothing I’ve ever seen before in comics, and it’s a beautiful thing.

EP: Pat’s very kind haha. I’m super excited for people to see what we’ve made with this book. There’s something in it for everyone, whether you’re into crime dramas, character driven stories, or over-the-top fashion!