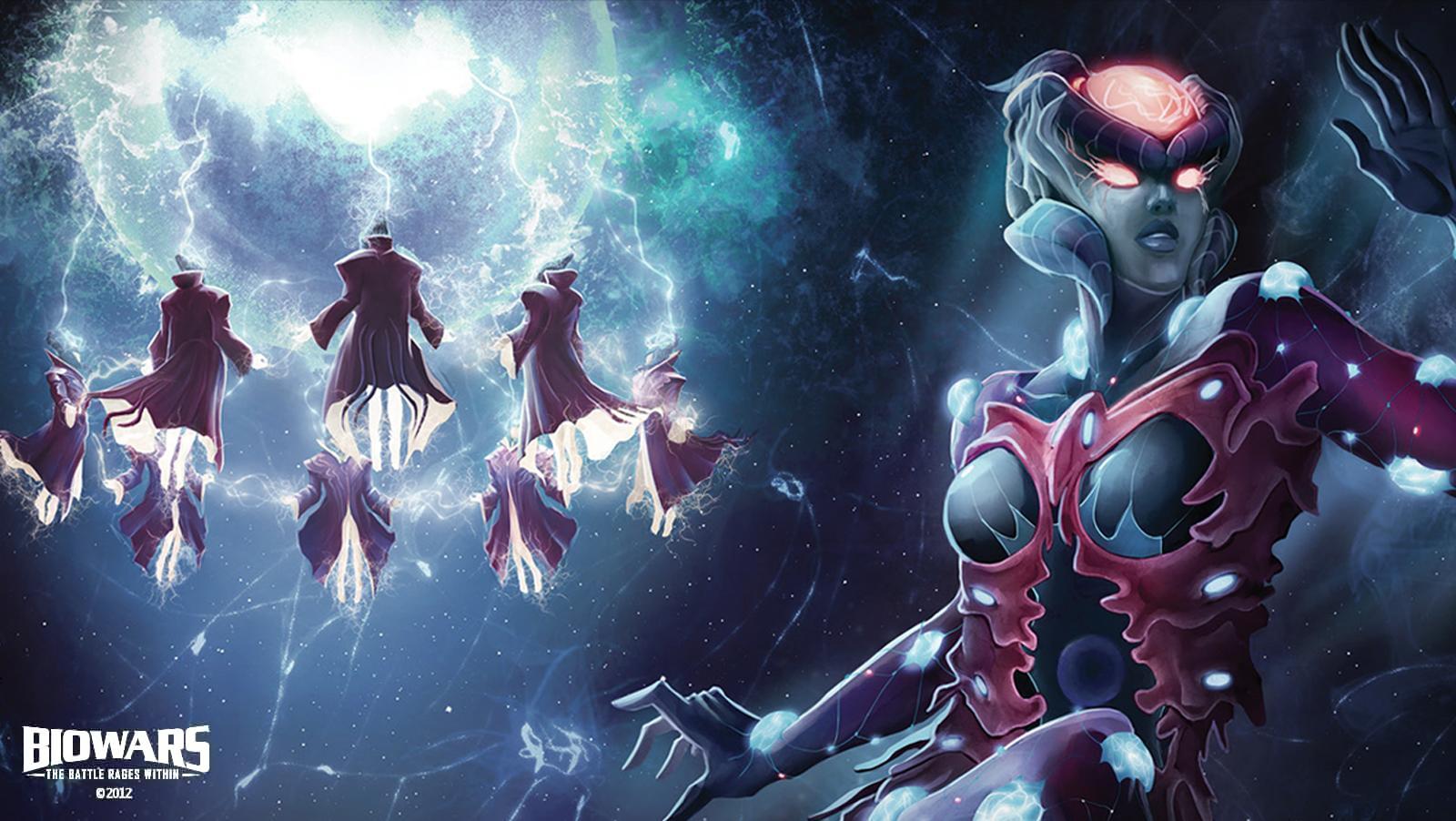 Imagine that there was a war going on inside your body and its outcome would determine not only your fate, but the entire world’s. That’s the premise for the exciting webcomic BioWars and we got a chance to talk to creators Gabriel Shaoolian and Lucius to have them introduce us to their extraordinary franchise and discuss what makes their webcomic stand out from the pack.

Anthony Blackwood: Hey guys, so excited to be talking to you about the beginnings and future of the BioWars webcomic series. Before we get started,  how about a quick introduction for those unfamiliar with the story.

Gabriel Shaoolian: Sure, BioWars is about the internal struggle that takes place in our basic immune systems against invading microbes, bacteria, and viruses. The story itself takes place on the microscopic scale but the constant battles against the millions of invading forces to our body are epic. The actual landscape belongs to Alex Hawking, a regular guy who’s just been infected with a deadly microbe, the likes of which the defenders of his body and the world has never seen before. 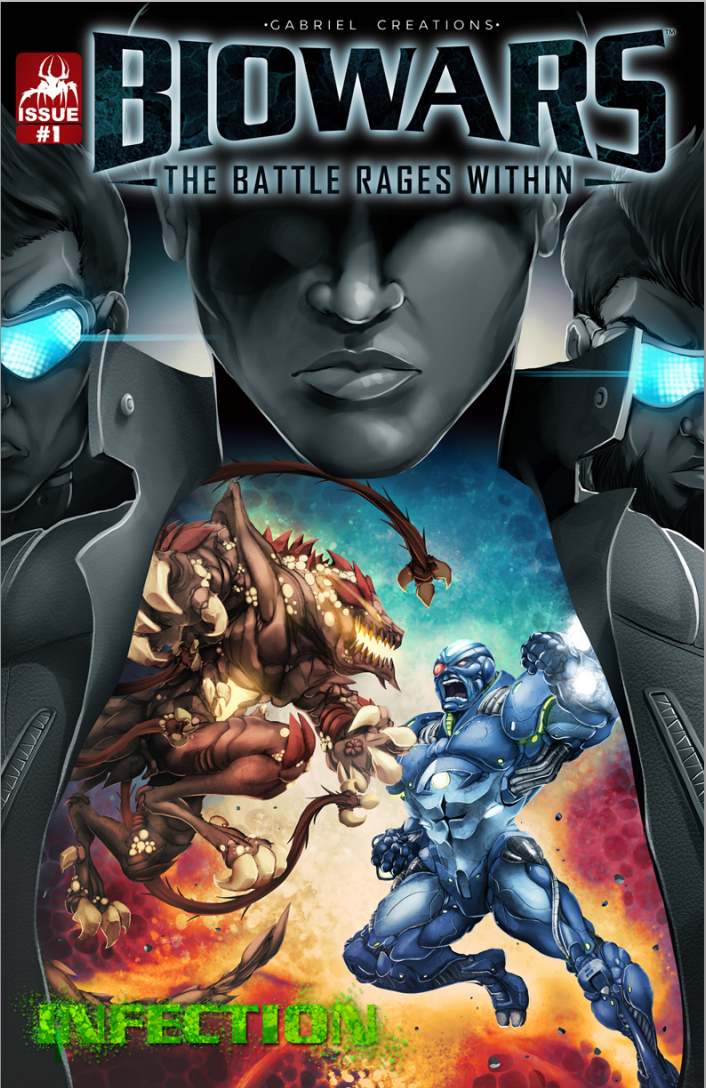 AB: The Comicosity Team has a lot of love for webcomics and we believe they’re a vital component of the future of the comic industry. It feel likes new webcomics turn up every day but BioWars stands out from the pack because it’s consistent and polished. One glance at the BioWars website and it’s clear that out of the gate, you guys were ready for this to become a franchise of sorts. What made you take the plunge into webcomics and what made you think webcomics would be a good starting point for the visionary world of BioWars?

GS: Biowars started as a hobby for me. I studied biochemistry at NYU and I became fascinated with how our bodies exist as micro-universes and the daily battles for existence that take place within them. I wanted to share my vision with everyone and open their imagination to understand how amazing our inner worlds are. I feel incredibly fortunate to have the means to share this story digitally with readers.

AB: BioWars is your vision, what was it like entrusting Mark and Lucius to bring your creation to life?

GS: I won’t lie, it was hard and it took time and many interviews to find good people. It’s so important to find collaborators with whom you have chemistry with because there’s so much preliminary work before the book even comes out. I’m lucky to have found creators that I could work with from initial story creation to styling characters and finally to crafting the final book.

AB: Lucius, what drew you to this project and did you feel any pressure knowing that Gabriel had this idea in his head for so long?

Lucius: I loved the concept. Taking different facets of the human immune system and re-imagining them as anthropomorphic superheroes battling against viral threats to save their world which also happens to be the inside of the protagonist’s body instantly drew me in. I wouldn’t say I was pressured by the fact that Gabe had been planning this out for so long, if anything seeing the passion he had for this project made me want to come on board and help bring these ideas to life even more. 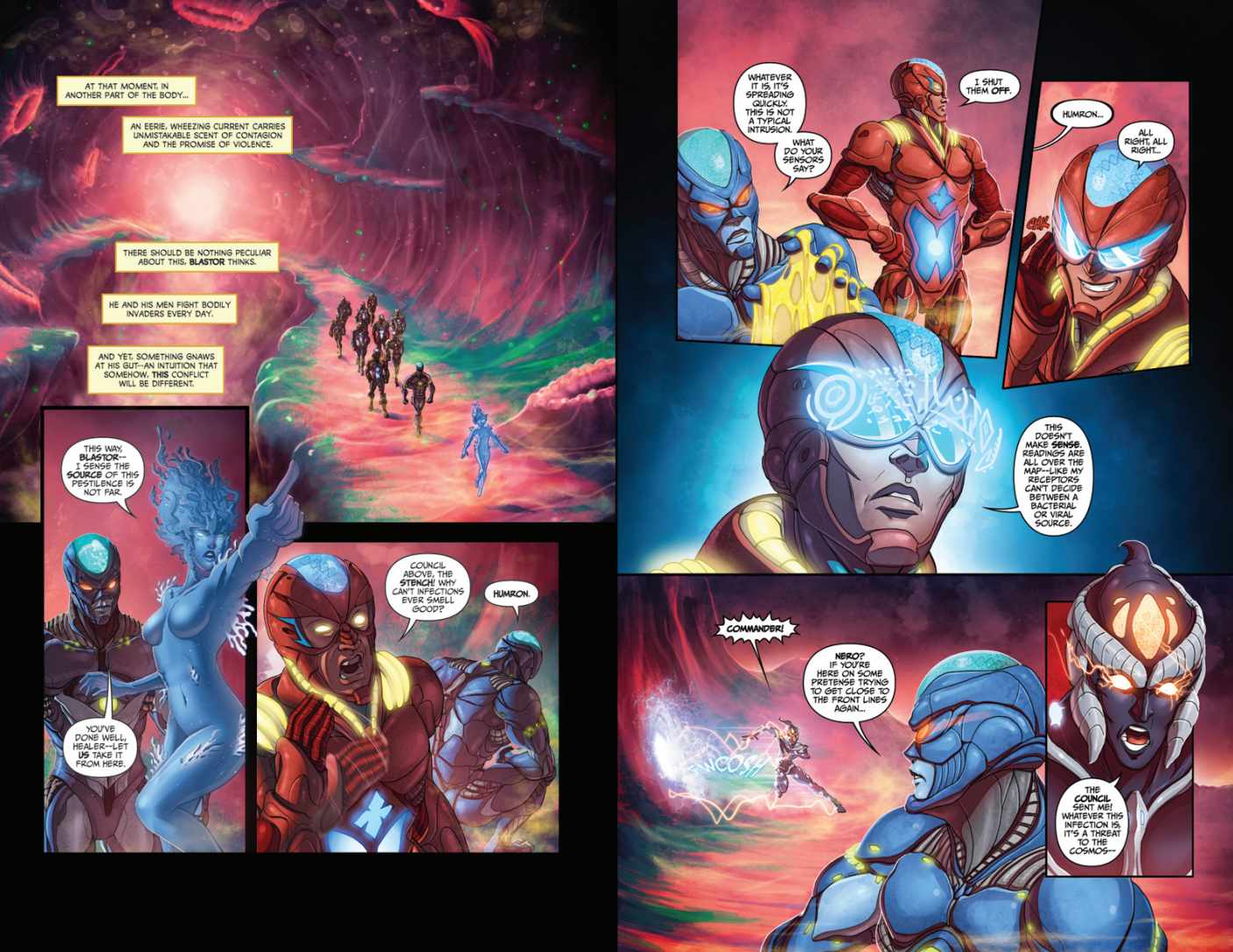 AB: A few months back at the BioWars Booth at NYCC, a lot fans and creators alike made great comparisons to everything from Final Fantasy to Osmosis Jones. Just goes to show how many different elements are at play in a story like this. What specific influences do you guys find yourselves drawing from when creating BioWars?

GS: I definitely have to give some credit to Stan Lee and the X-Men. I’ve always been a big comics fan and the possibility of mutations happening is something that I’ve always fantasized about. As you read, you’ll definitely see similarities between the X-Men and the BioWarriors in the ways their powers differentiate and present themselves in battle.

L: We just knew we didn’t want the comic to feel like you were flipping through a Biology textbook. Our main goal was to have the Biocosmos and its inhabitants appear otherworldly, with each region of the body looking like a crazy alien world in some far off galaxy. I’ll let the readers decide if we accomplished that goal or not.

AB: BioWars is really one story being told from two fronts. You have Alex Hawking, a college student, infected with a deadly and mysterious microbe, and as he tries to discover answers for himself in the real world, the Biowarriors of his body are engaged in a war against a foe they’ve never dealt with before. As creators, how do you manage to shift the story back and forth between the grounded real world occurrences and the fantastic battleground of the Biocosmos?

GS: That’s definitely one of the challenges. We’re constantly zooming in and out of the parallel situations. At first, we always present the transition in specific resuming panels, such as Alex’s eye. After a while, hopefully the reader becomes familiar with the storytelling and the shifts are easier.

L: One way we tackled this from a visual standpoint was to differentiate the two stories by giving the inside and outside world pages their own border, with the Biocosmic pages surrounded by a black border and the real world pages surrounded by a white border. It’s a simple visual cue that really helps keep things clear for the reader, so that they’re never confused about which world the reptilian-esque tentacle monster and his army of flying pyramid-shaped spider bugs belongs in. 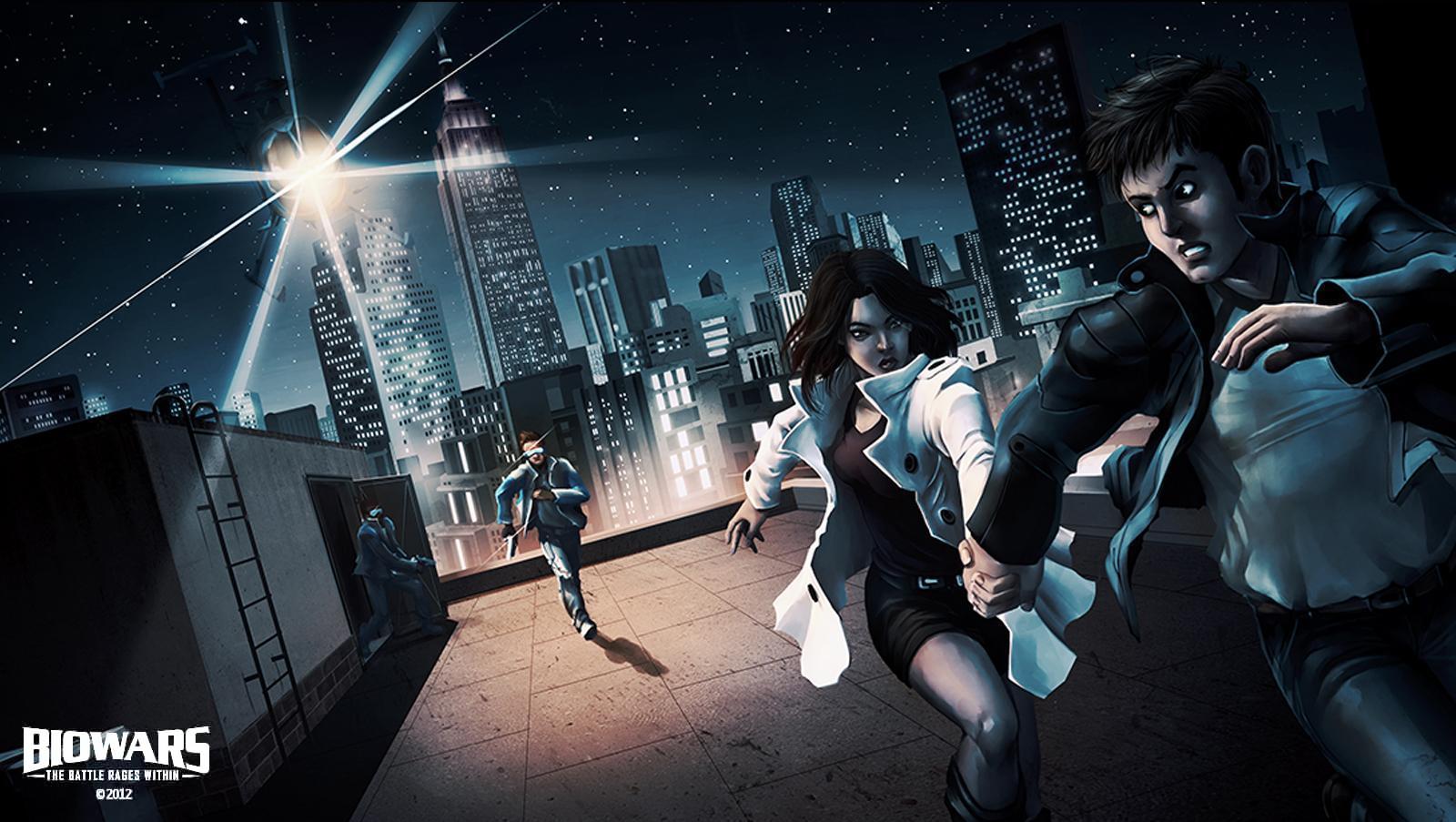 AB: One of the things that I find most fascinating about BioWars is the idea that the Biowarriors don’t know what they’re fighting for at the end of the day. It’s all very mystical and there’s even some religious undertones at work. Was it always your intention to keep the Biowarriors in the dark of their life mission?

GS: The truth is, when you get a paper cut, you say ouch and go about your day but your body, the endo system, the nervous system react to fight off thousands of foreign invaders in ways we’re not made aware of. All of these millions of cells are alive for the greater good, taking orders from the cells in the brain and the cells in the brain give orders from our subconscious so in a crazy way, are we the faulted gods when it comes to the cells of our body?

AB: Just looking through pages of the comic, it seems like a gaming spinoff is a no-brainer. Let’s talk about that mobile game you guys were showing off at NYCC. What can we expect from it?

GS: Yeah, the first two games out now are typical action shooters featuring our BioWarriors. A fun shooter type seemed like a natural fit given the grand battles that exist in the books. Down the line, we will introduce games that intertwine more educational content.

GS: In two months, we’ll have a brand new website! I hope you enjoy BioWars and spread the word! I want to share this great adventure with everyone.