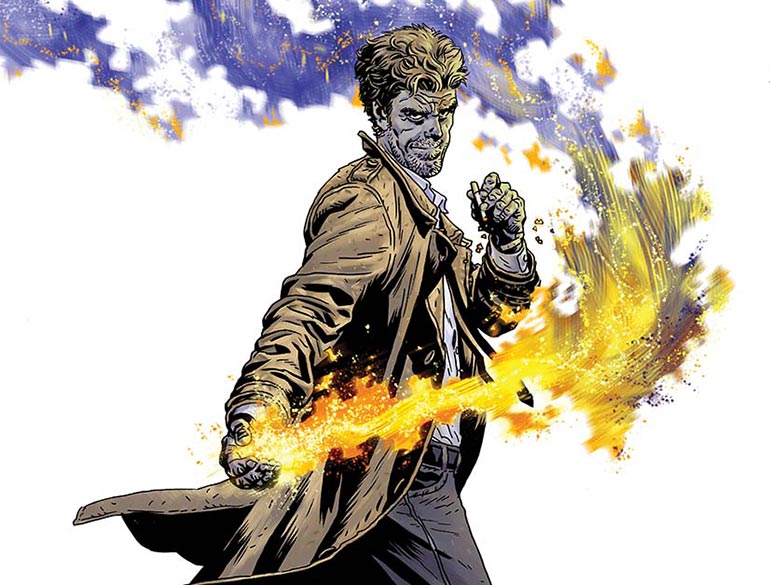 The baddest hero in the DC Universe — or maybe the nicest villain — is about to come back with a vengeance. John Constantine gets his own rebirth with writer Simon Oliver and artist Moritat bringing the Hellblazer back to merry old England. We talked to the creative pair about the upcoming special, how John will be different in the new ongoing series, and what the Brit would think about #Brexit and the current scene in the United Kingdom. 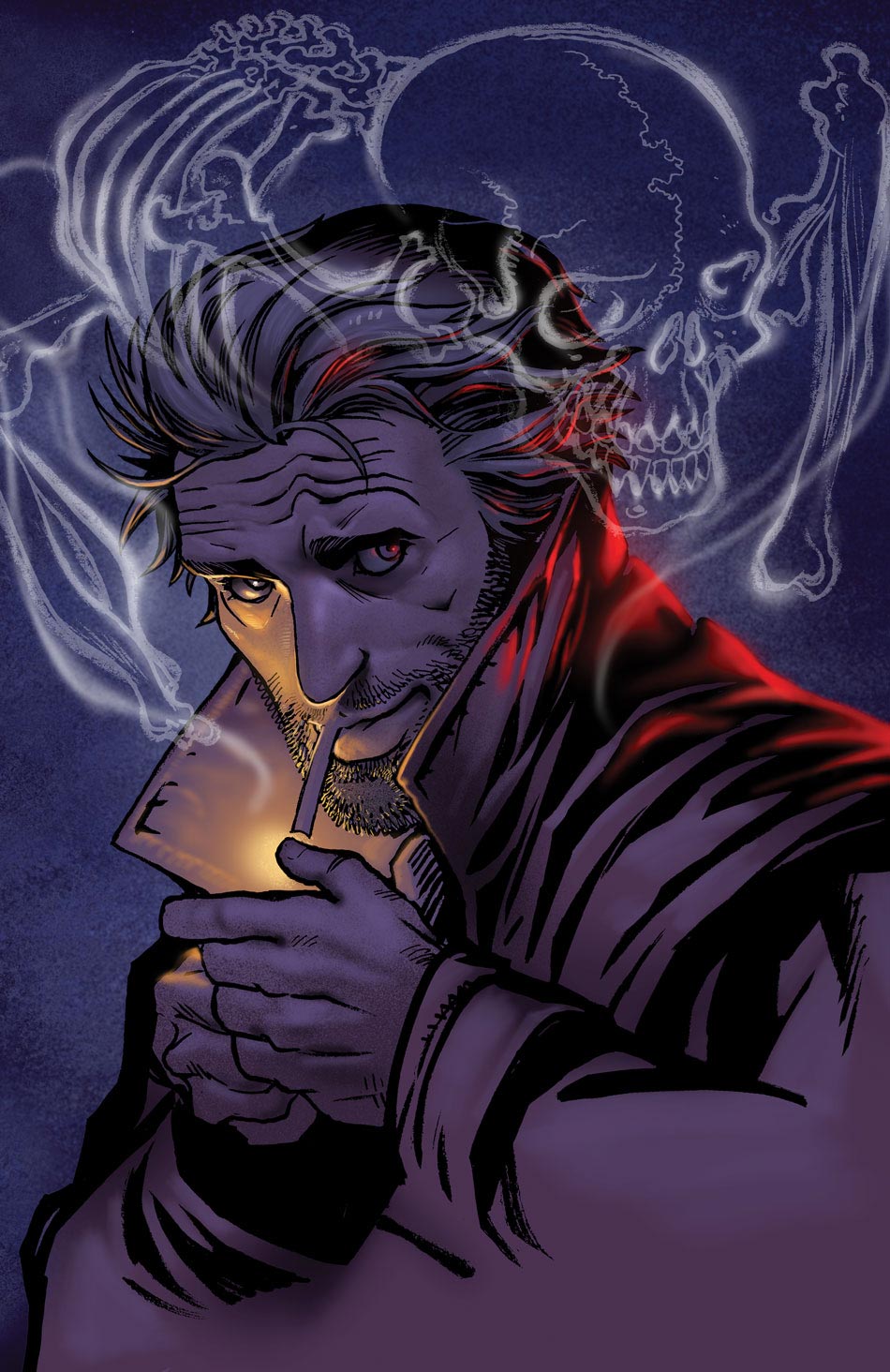 What were your first impressions of John and how has that thought and art process been evolving as you get into the series?

Simon Oliver: Anti-heroes and lovable bastards are hard to pull off, and to me he’s always stood head and shoulders above the rest. I’ve always had a big soft spot for the character. Out of all the comic characters to me he always felt real, like somewhere out there he really existed. I’m a little younger, but I’m English, cynical and bitter in a similar way, so the voice isn’t a huge stretch for me to pull off.

Moritat: Thank you very much. When you first find the character as a fan it’s the best part. The character is presented to you. Fan art, commissions, even guest appearances….Then everything switches when it’s your turn to present the character.

What does John Constantine keep in his pockets? Does he even wear underwear? He started as a rough around the edges private eye type who investigated strange happenings on the edges of the DCU. Now he is a character that keeps the balance where heroes fear to tread.

MSG: Coming off the DCYou Constantine: The Hellblazer run from James Tynion IV, Ming Doyle, and Riley Rossmo, fans have grown used to a John Constantine interacting with the DC Universe again. In your minds, what is his role among the greater universe, and will your run be leaning in or pulling back?

SO: I’ll be using some DCU characters along the way, but I’m not sure how much or how little of that will be tied to the bigger DCU world. 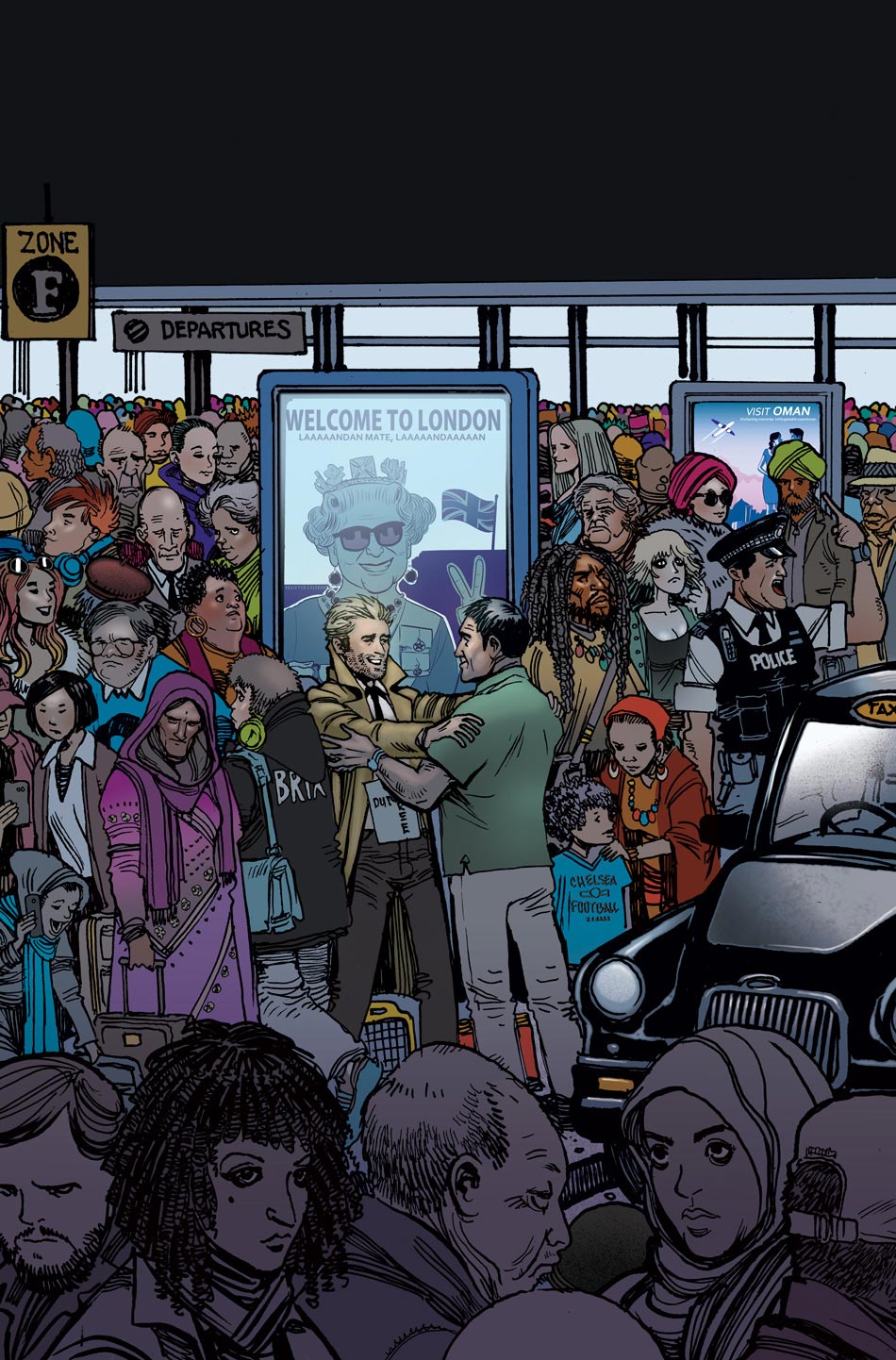 MSG: Right off with Hellblazer: Rebirth, we see a Constantine in a bit of a pickle with forces greater than himself. Tell us a little about how you imagine his character’s ability to punch up so successfully. Is he the ultimate underdog or just insidious?

SO: I think it’s because of his ability to read people and of course demons and assorted things that go bump in the night. That’s what the con is built on, and that’s what sets him apart. I think if he relied on hocus-pocus and straight-up magic he wouldn’t be anywhere near as interesting a character.

MSG: One of the other immediate changes with the new series is bringing John back to England and his mate Chaz. Are these familiar surroundings important for your interpretation of his character? Does England epitomize something about John for you that ties them together?

SO: When I was asked to take the character back to his roots, my first instinct was to bring him home. And yes I think the location and the character are very interwoven. Any “rebirth” could only happen there. I wanted to get Constantine in the pub, eating curry, getting under Renee’s feet. It felt very natural to what I wanted to do with him. 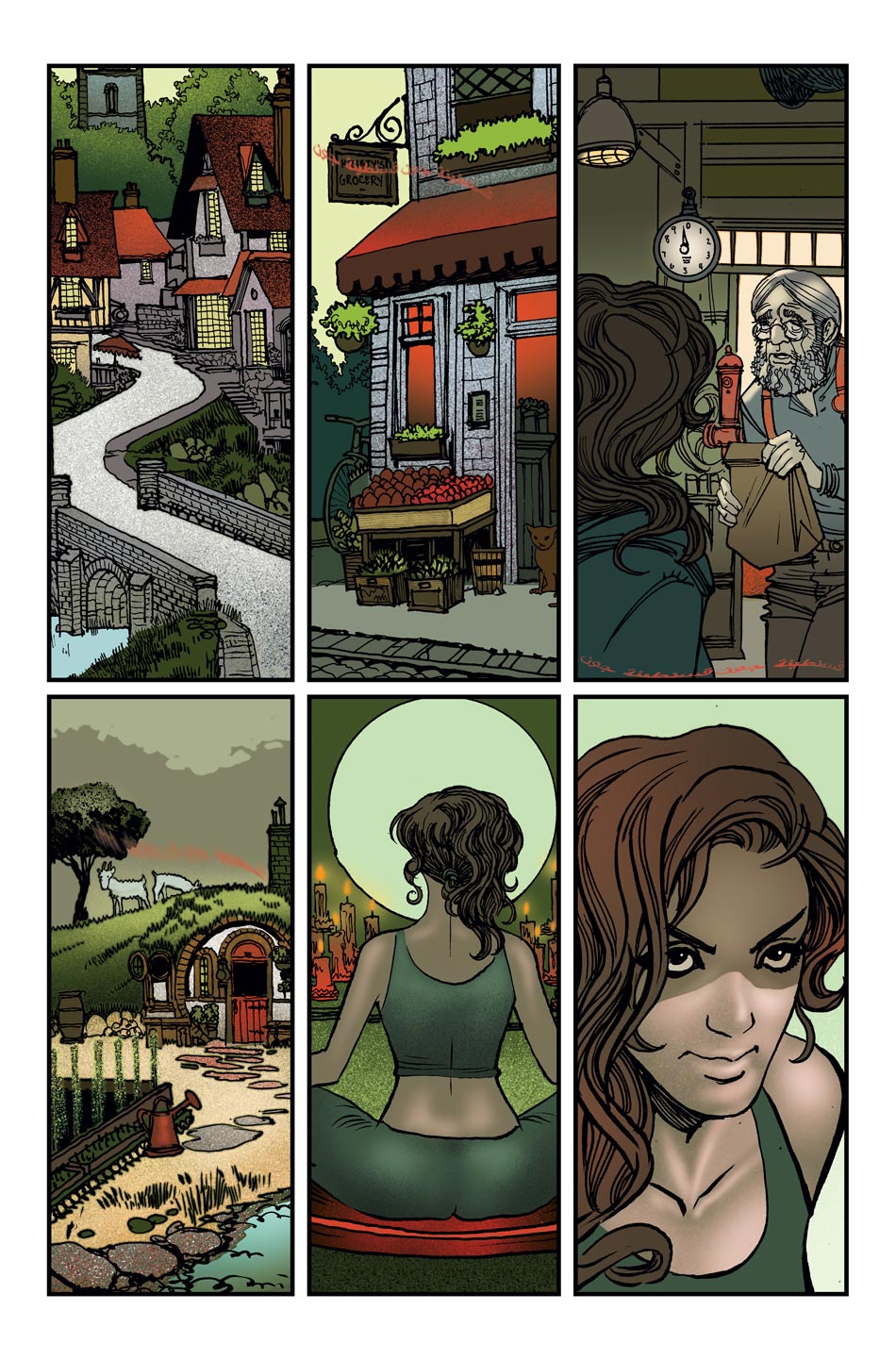 MSG: Of course, British politics are taking center stage in a lot of the news lately, and the long-running Hellblazer series never quite shied away from the social or political. What would John say about #Brexit and the role of immigration and diversification of the United Kingdom?

SO: I agree. And I think Brexit and by extension the rise of Trump would deeply horrify him. It’s kind of everything he stands against. The old book railed against the Tories and the National Front and 25 years later here we are again. So be prepared to see Constantine throwing his two cents in.

M: It’s amazing. Like John Constantine was brought back to bloody ol’ England by magic.

MSG: It feels like you’re looking at John more closely in a visual and attitude sense with his classic 1980s look. What are you picking up in terms of the Rebirth as classic and how are you imagining keeping that fresh for new readers?

SO: With the return to England I’m picking up on the Vertigo mythology, but hopefully in a way that won’t be off-putting to new readers. As a writer I can’t help but bring some of my shitty attitude to the character and it really lines up with the snarky, angrier John of old. That’s probably the biggest take away old and new readers will pick up on. Constantine has issues, and I’m not talking strictly printed ones.

M: I really looked at mackintosh coats and settled on the one that he would probably borrow from a coat rack or pick up in a second hand shoppe. 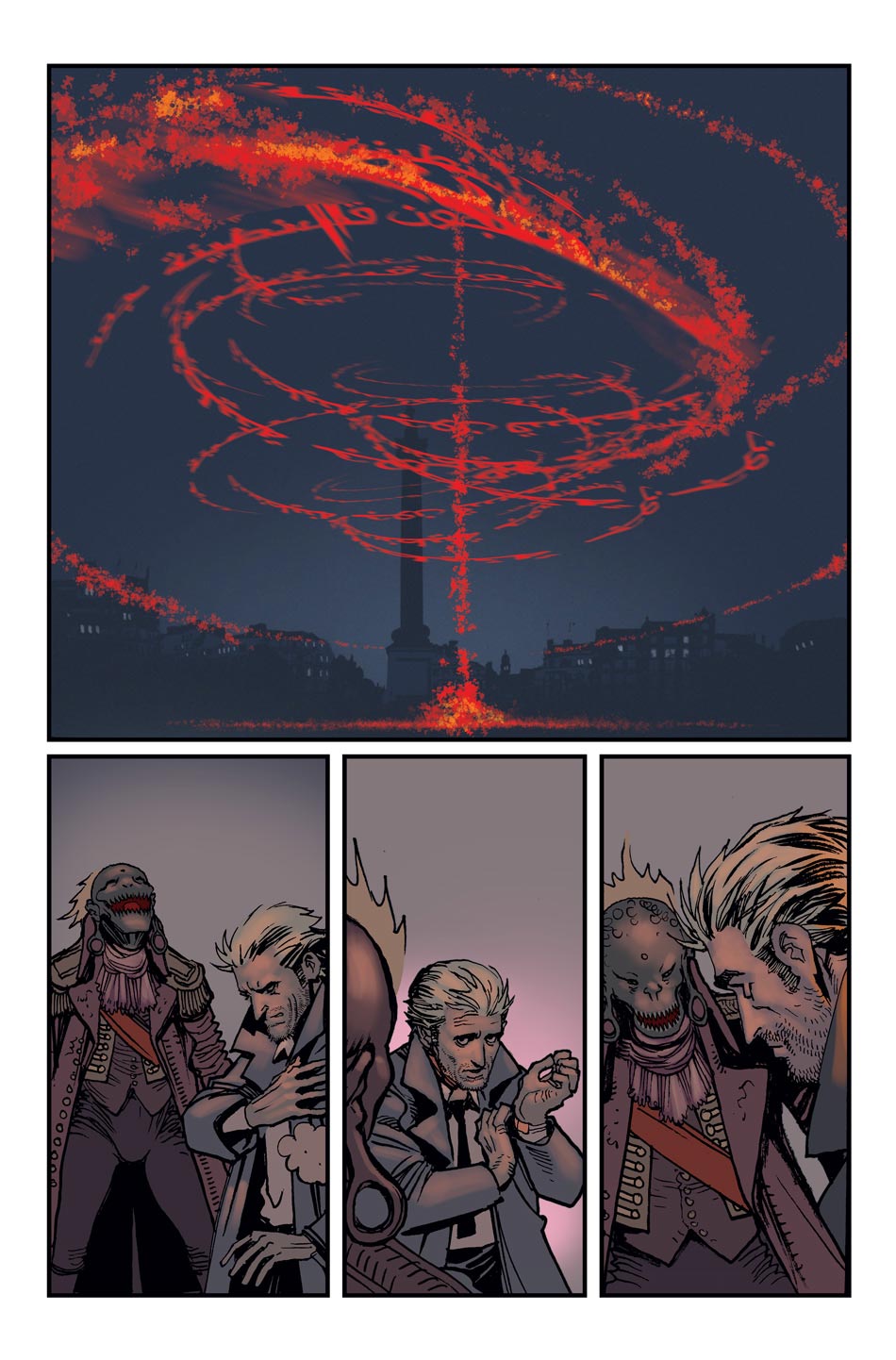 MSG: John’s had a long relationship with the Swamp Thing, not to mention other characters from Vertigo publication that have made their way back to the DC Universe. Any in particular you’re looking forward to writing and drawing, even among the more traditional DC characters?

SO: I’m using a lot of old characters from the Vertigo run, like Clarice and Map. I’m not really a superhero writer, so I’m kind of curious about what could I bring to that. But as a superhero outsider, I think Constantine feels kind of the same way. It’s not his world, he’s not sure what to make of it.

I got a buzz out of putting Wonder Woman in the Rebirth issue, and can’t help but think about how much fun it would be to just do a single issue of John and Wonder Woman out together for one night in London. Some of the diehards might cringe, but I think it could actually be fun to bring the DCU to John’s world rather than squeezing him into theirs. 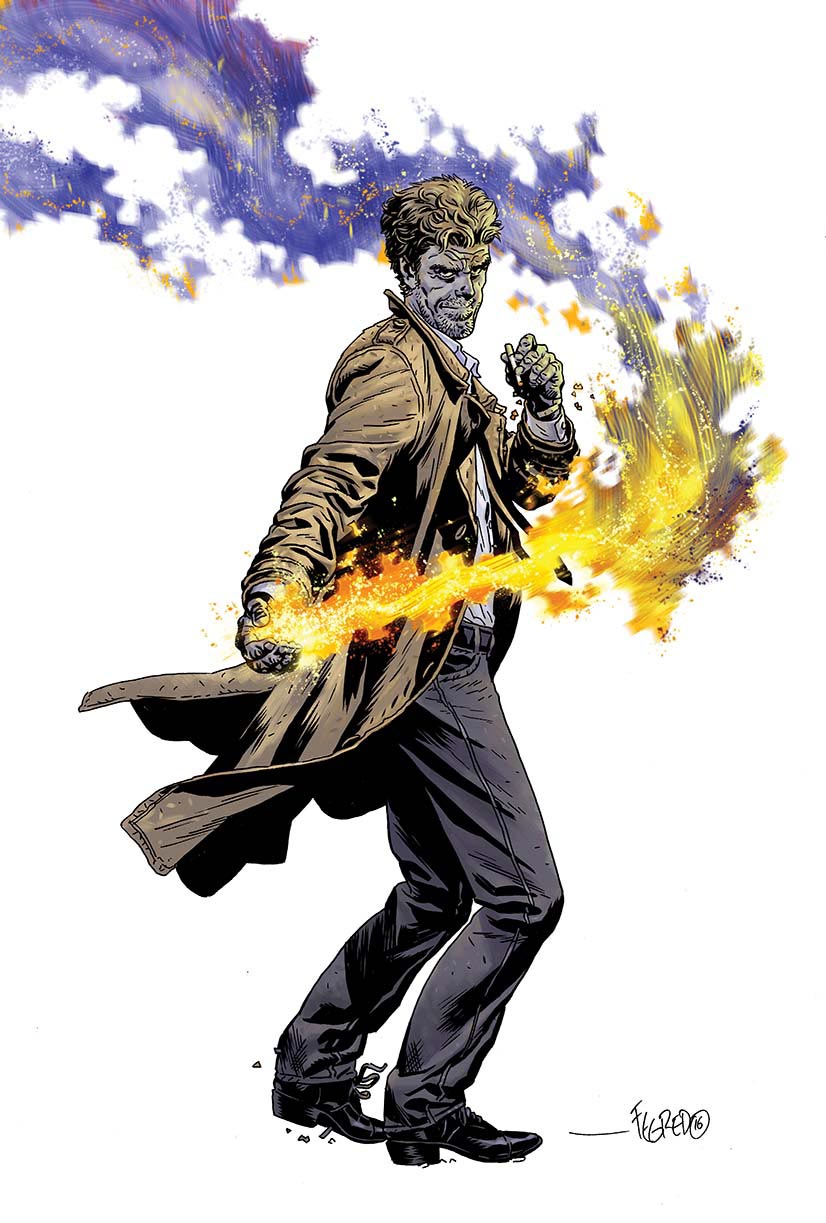