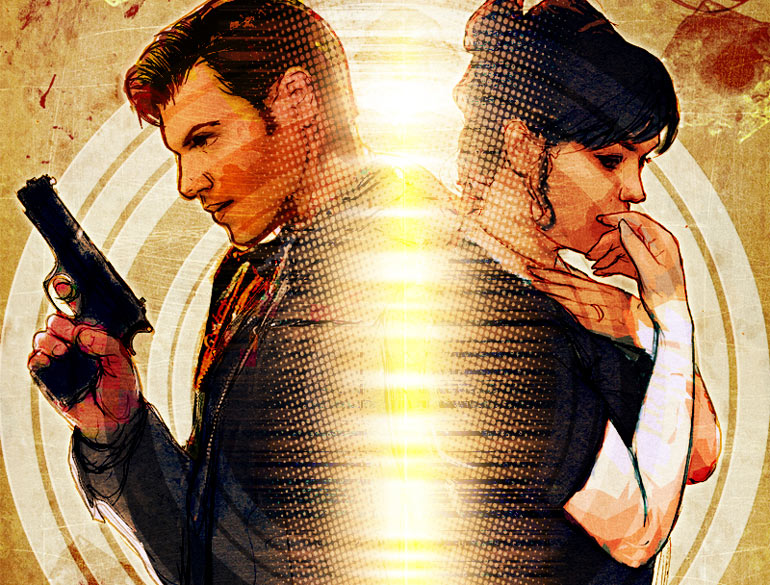 That’s just the bit with Image Comics’ upcoming series CrossWind from master creators Gail Simone and Cat Staggs. Both Simone and Staggs took time to lay out the ideas behind CrossWind with Comicosity, the inspirations for their lead characters, and how the look of the book reinforces its core conceit.

Matt Santori: Tell me a little about the genesis of the project. Did you develop CrossWind in tandem, and how has the initial design process worked between you two?

Gail Simone: I had the initial idea and plot, but that doesn’t really convey the whole picture. When Cat brought her first concept drawings, it changed the whole story. They were so real, so down-to-Earth, that we made the story a bit less of a fantasy up front.

And then when she drew the first cover, to issue one, I knew I could go full-throttle, that the art was going to propel us forward. So the script became leaner and meaner. It’s a case of Cat’s raw talent allowing so much more than I had in mind. 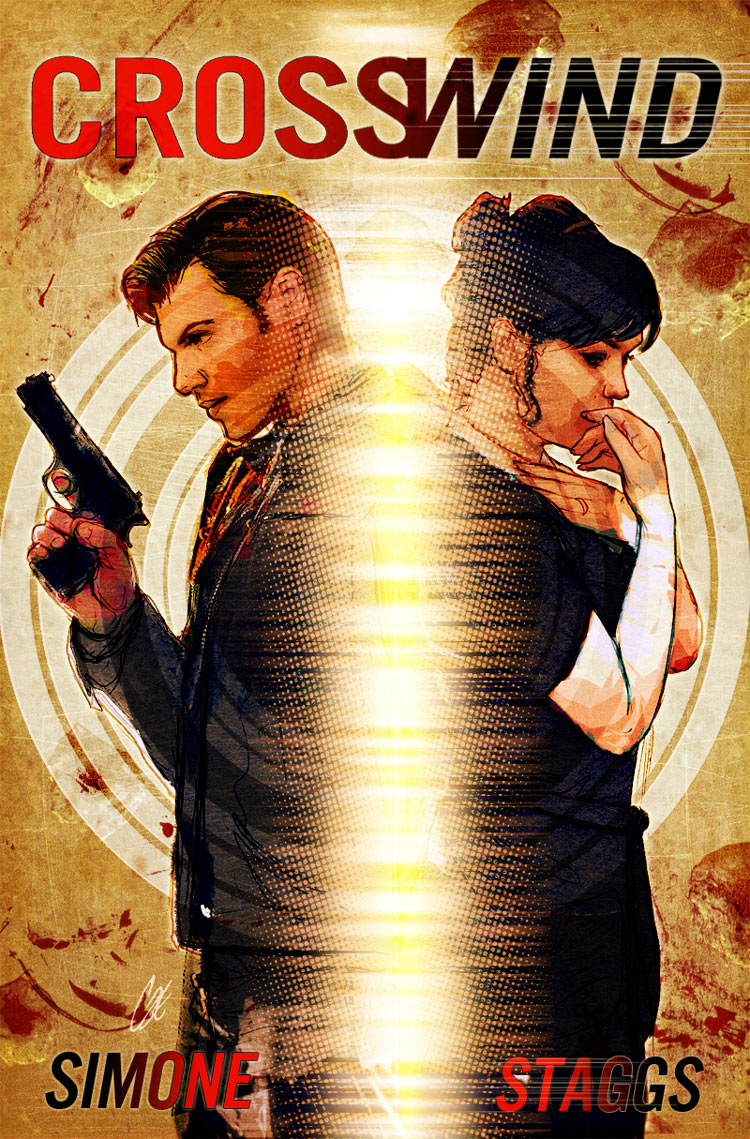 Cat Staggs: Gail pretty much had the concept when she approached me. I said yes before she finished telling me about it. We had wanted to work together for a while and it finally aligned.

As far as design, we handled it like any comic. She sent a general description of the setting and characters. I took that and expanded on it. We seemed to understand what we were each wanting right off the bat.

MS: What inspirations came into play for your characterizations of Bennett and Juniper?

CS: Cason is the type of guy that would keep a spare pressed shirt in his car just in case he was hit with some blood splatter. He is good at what he does and knows it but isn’t arrogant. I feel like in his mind he fancies himself like James Bond but his reality is not quite that polished or just. He is the guy other guys see and aspire to be like.

When designing Juniper, I decided to go the caterpillar/butterfly route. She was beautiful but has been so broken down by her life and relationship that she would never feel that way about herself now. She hates where she is but has no strength to get out of it. We all know this woman. The friend we know is in a bad place but we cannot help her, she has to help herself and we just have to be there for her on the other side. 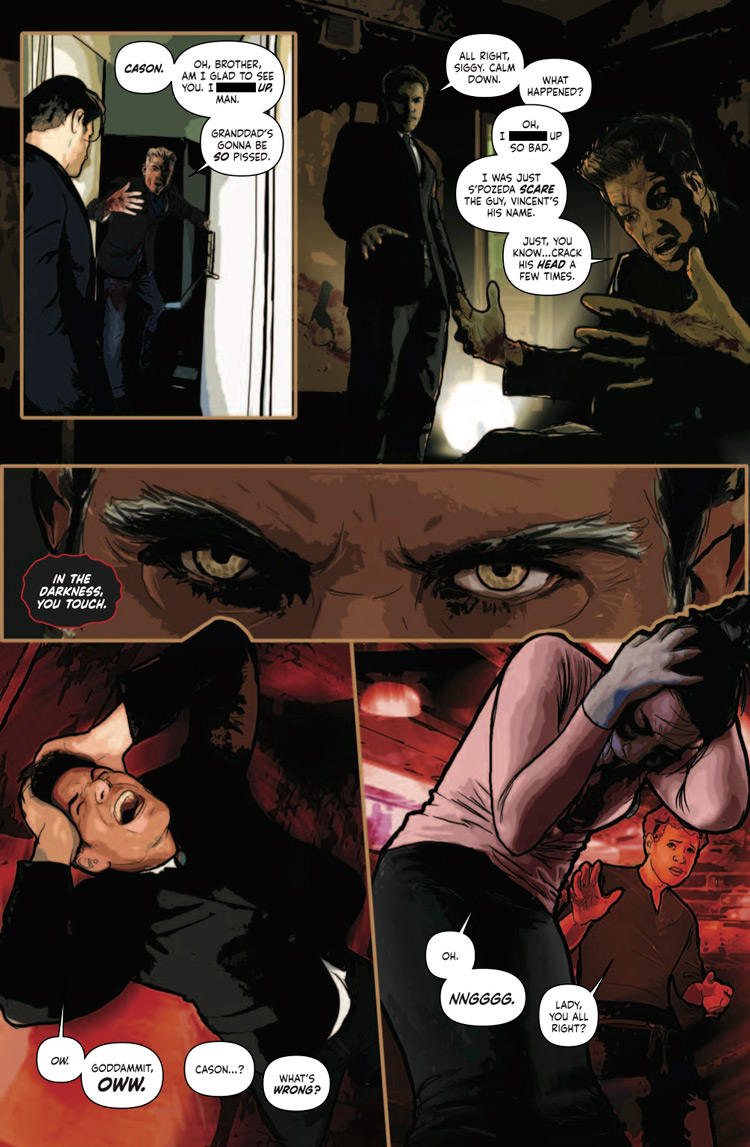 GS: Cason’s an interesting dude … I worked (briefly, because I was bad at it) in sales while I lived in California, and there were all these incredibly slick, good-looking, successful sales guys, they dressed immaculately, they had nice cars, and people got sort of swept up in their charisma, even when what they were saying was complete and utter horseshit. It was interesting to watch, how they could turn the charm on and off, and yet, people still respected them…total strangers treated them like celebrities.

At the same time, the successful women in the same offices, their story, and how people treated them, was entirely different. They had to worry about criticism and harassment and no matter how successful or attractive or smart they were, they were subject to constant evaluation by everyone around them. Odd to watch.

It’s not entirely gendered, I’m sure you could swap genders and get people in the same situations, but it was interesting to observe. Cason gets respect everywhere he goes, Juniper couldn’t buy respect if she cured cancer, and both of those conditions have shaped their entire lives. 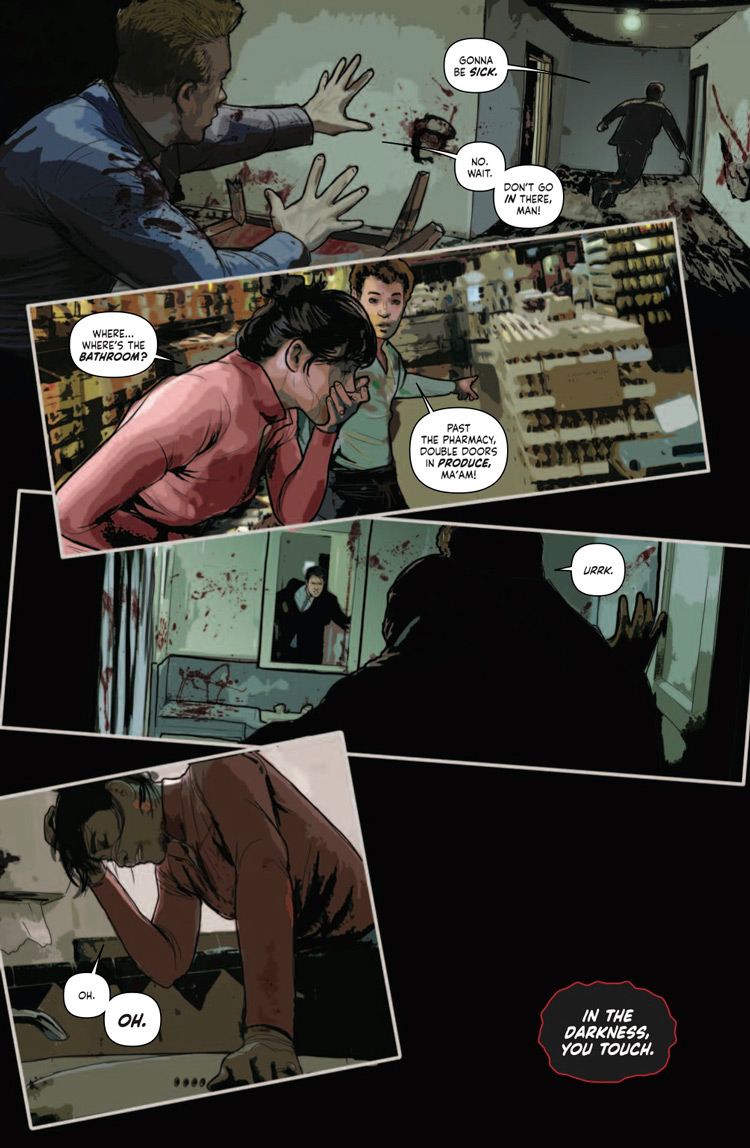 MS: Cason and Juniper are obviously very very different characters in superficial ways, but I wonder: what do you think they have in common, if anything?

GS: THAT is exactly what they end up asking each other!

MSG: The swap is, of course, a clever play on Freaky Friday — but between people, I assume, who don’t know each other. How does that change the dynamic of the trope for you?

GS: Well, primarily, I think it’s a lot more terrifying. How does a Seattle housewife fake being a Chicago hitman?  She has no idea why she’s in this predicament.

MS: Environment plays a key role here, the suburbs specifically, and is something we’ve seen recently in Secret Six as well. How do you think that contrast between suburban life and something more metropolitan drives the characters and their situation?

CS: For Cason, I really wanted it dirty and dangerous mixed with sophisticated style. For Juniper, it needed to be a clean chaos that, at the same time, feels suffocating to her. Setting the mood early for each of their worlds is so important to this story because once they switch, they have to feel these same all the anxiety of the places they “left” and they possible freedom of being someplace new. Only they don’t know who they can trust or what they can trust. 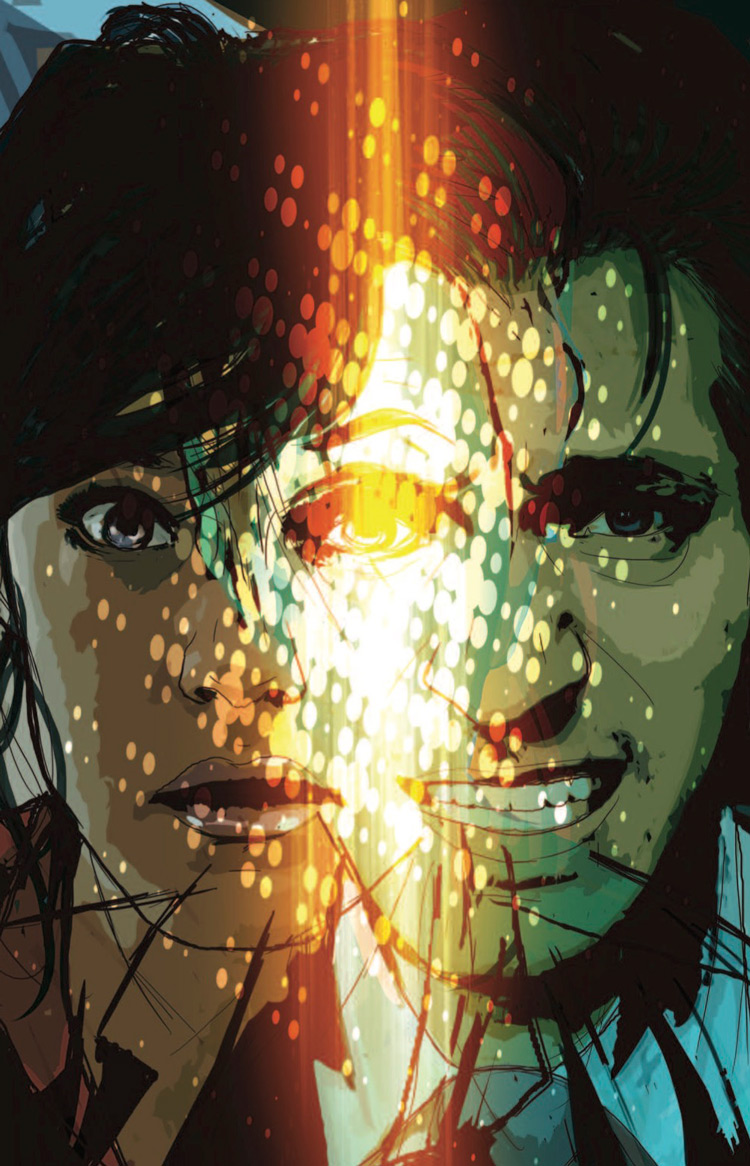 GS: Any time you take someone out of their comfort zone, any time you take them away from the place they think of as ‘home,’ in their heart, you are challenging them. I was raised on a farm, I love big cities and travel all over the world. But when it comes to where I LIVE, I still want to be somewhere remote and lovely and quiet. We are creatures of our experience. That’s why taking it all away is so devastating.

MS: Cat, your style for Crosswind is intensely photo-real, but still, has this veneer of artifice to it. Can you share a little of your physical process and how you came to this particular look for the book?

CS: It was very important for this story that the “acting” be strong. There is a lot of meticulous planning in the layout stage. Like any good artist, I have a large catalog of reference material and whatever I don’t have I will shoot what I need. So much of this story relies on small gestures. Having to remind the reader that this is not completely a man or woman. The woman’s mind is controlling the man’s body and vice versa.

So I have to remember when I am drawing Cason, in Juniper’s body, that he has to move like a woman would move as he tries, or pretends, to be “a woman”. The opposite for Juniper.  How would a man stand, hold something, etc? I have a list of personal gestures, including such as left handed vs right handed, for each character to help me keep track as we go along. 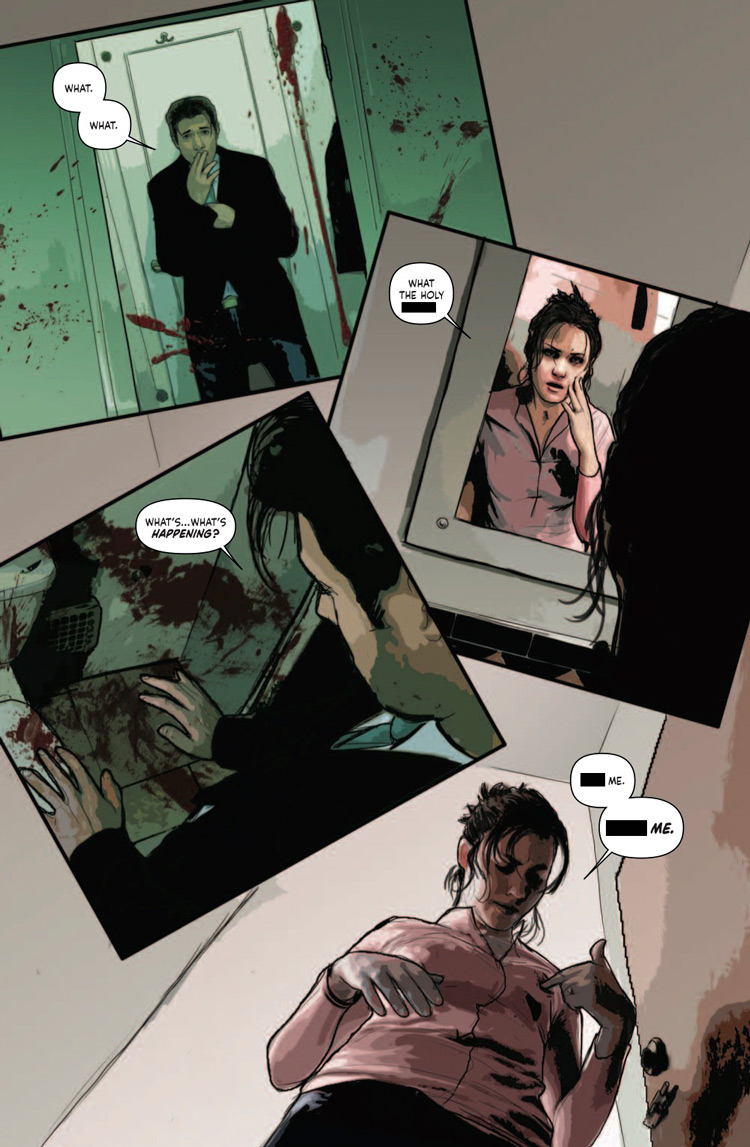 CS: I definitely wanted the panel structure to mimic the story. The initial set up is all pretty straight forward. As the switch happens I wanted the page to feel the internal chaos the characters were feeling. Much like going from a locked camera to the mobile shaky cam.

MS: And are you working on your own colors — if so, how has that affected your art style as a whole?

CS: I normally color, for covers, in a mix of traditional and digital rendering/colors. For this, I knew that if I wanted this book to come out in our lifetime, I couldn’t work the interiors like I do for covers. I played around with a few ideas and finally settled on how I wanted to work the colors.

I have given both Cason and Juniper their own color palette. Which, I hope, sets the mood for their respective lives. I have also used it for emphasis in certain situations. It has become just as important as the line work in the storytelling. 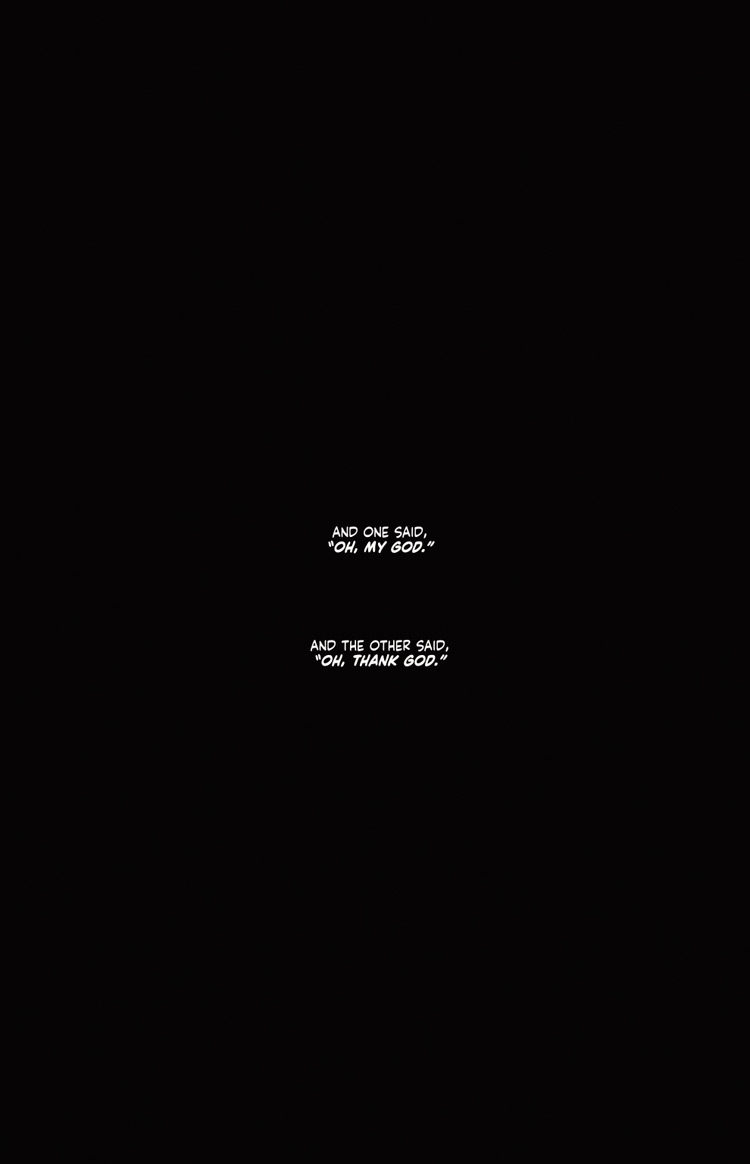 MS: Gail, has anything surprised you about how the book has developed, either in your thought process or in seeing the work visualized by Cat?

GS: Just that it’s a fun challenge every day, because of the SWITCH. Even conveying to Cat who is speaking, when someone is on the page not in their original body, that was something that had to be carefully considered. Everything in the art, down to the coloring and lettering, has to subtly convey who the characters are.

I love it, it’s a challenge, but I adore it.

MS:  Any other thoughts or special teases for fans in advance of CrossWind #1?

GS: It’s sexy, it’s fun, it’s surprising, and it’s an exciting thriller with some of the best art on the stands. I can’t think of anything else like it.

CS: This book is brutal, sexy, funny, and smart. It will have you on the edge of your seat with each issue. Gail Simone is at her best. I hope everyone enjoys it!