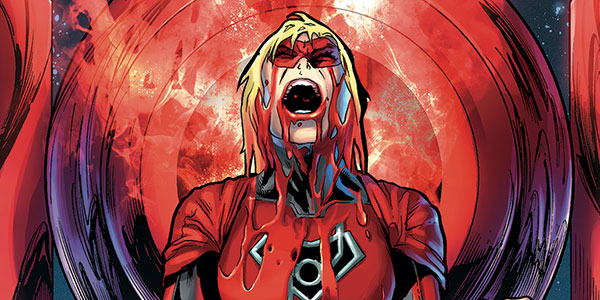 2013 saw the greatest upheaval in creative teams for the Green Lantern franchise since there was a Green Lantern franchise, with Geoff Johns stepping down and handing over the reigns of the Emerald Warrior to writer Robert Venditti. As if to set the tone for a brand new era right away, Venditti and his writing colleagues, Charles Soule chief among them, immediately took the multiple Lantern Corps through the “Lights Out” event and the heroes came out the other side changed forever. Now we have another crossover hitting stores in February, but this one takes that moniker quite literally in the form of a single flip book for Green Lantern #28 and Red Lanterns #28, to twenty page stories for the single price of $2.99. Robert Venditti and Charles Soule graciously sat down with us to talk out the repercussions of the “Lights Out” event, what fans can expect out of the upcoming flip book, and where all this leaves Hal Jordan and Guy Gardner in months to come! 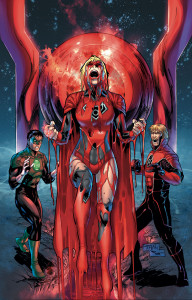 Matt Santori: Robert and Charles, thanks so much for taking time once again to chat with us! Both the Green and Red Lanterns were massively affected in the wake of the “Lights Out” crossover. In your minds, does the new sector protection status quo serve to drive the teams together or pull them even further apart?

Charles Soule: To my mind, farther apart, although they were already driven pretty far from each other by Hal sending Guy to join the Reds in the first place.  Guy feels like he’s on his own track now – which he is. He doesn’t need the approval (or the help) of Hal, or anyone else.  He’s gotten himself Sector 2814 to protect, so now he’s going to prove it.

Robert Venditti: Yeah, I think for Guy, he’s always sort of been seen by everyone else as second (or even third or fourth) banana, but he certainly doesn’t view himself that way.  This is his chance to be THE Lantern of Sector 2814, and if his uniform is red instead of green, so be it.

On the other hand, no longer being able to patrol Sector 2814 is a total rock-bottom moment for Hal.  This is the job he was chosen for, and now he can’t do it.  But the greatest successes are often born from the harshest adversities. 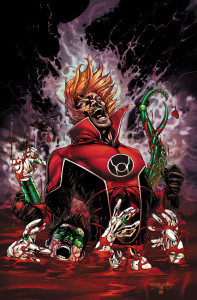 MSG: With the perceived death of Atrocitus, Guy has been surprisingly well accepted as leader. Is this a case of finally getting everything he ever wanted, or does Guy still have Hal’s big picture in mind?

CS: Guy, at this point, could care less about Hal Jordan.  I’m sure he still cares about the Greens, but his feeling is that if Hal doesn’t want him in his little club, then he can have his big space police thing. Also, I think one of the reasons Guy’s doing well with the Reds is that he’s not trying to force his viewpoint on them.  He’s done with that. The Reds figure things out as a group, and then they do stuff.  Sometimes that “stuff” is getting lit in the one and only bar on Ysmault, but it still counts. I don’t think the other Reds would call Guy their leader, and he wouldn’t either. They trust his judgment, but anyone can speak up. It’s a cool dynamic. Anarchic democracy.

MSG: The Lantern universe overlaps once again in February — this time quite literally — as Red Lanterns #28 is offered as a flip-book with Green Lantern #28 — for a single $2.99 price. How did this idea come to be and did the format impact how you two introduced the story from there?

CS: This was really Rob’s idea, so I can let him run with it, except to say that I was on board from the beginning, and I’m glad he did as much as he did to sell it as a concept.  It’s turned out really well. 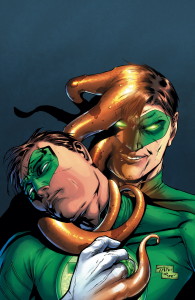 RV: Once Charles and I came up with the idea for how and why Sector 2814 would change hands, I started thinking about what we could do to put the story in front of as many readers as possible.  Charles and Alessandro Vitti are doing an amazing job on Red Lanterns, and the book deserves more attention.  So I put together a presentation that involved print costs and distribution costs and all sorts of things, and then pitched the flip-book idea to DC.  To their credit, they decided to take a chance on us.  It’s no small thing for a publisher to effectively give away a comic book for a month—and I wouldn’t have blamed them if they’d said no—but their willingness to experiment shows that they believe in the books they’re putting on the shelves.

Once we knew the entire 40-page story would be in a single comic, Charles and I used that to the story’s advantage.  For example, there’s no need to recap readers at the beginning of the Red Lanterns portion because everything is being read at once.  The format really allowed us to pack a ton of content into the pages.

MSG: And of course, the big news is Supergirl’s arrival to the Red Lanterns team in issue #28. What was the impetus for Kara’s inclusion in the rage-filled Corps and how are you working out her ongoing story with [Supergirl writer] Tony Bedard? 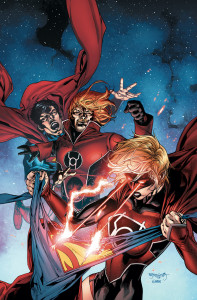 CS: This one was my idea. There are things going on in the Red storyline that allow for the team’s membership to get expanded a bit, and I also knew that DC is always open to hearing interesting new ideas about the characters, particularly ones that help to emphasize the cohesiveness of the universe.  It’s been pretty clear that Kara’s been dealing with a lot of anger – so it makes sense that a red ring might find her. But that’s not where it ends. The ring is just the beginning of Kara’s story with the Reds. We’re treating it almost as therapy, and we’ll get some cool beats out of it, both in Red Lanterns as well as the main Supergirl title Tony’s writing.

MSG: Fans have reacted strongly to Supergirl’s arrival as somewhat of a drastic change, something that many don’t feel is natural for her character. What do you see in Kara that makes her candidacy in the Red Lanterns a fitting story arc?

CS: I think that people who are against the idea are viewing Kara’s character as they wish her to be, not as she actually is, or has been portrayed in the New 52 to date. That Kara would absolutely be able to get a red ring to find her.  Stories (in general), should be vehicles for characters to grow and change, and that is what we’re doing with this one. 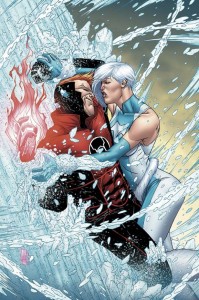 MSG: Supergirl’s arrival is not the only ripple cascading through the Lanterns as tension has increased for John Stewart, among others, involving Hal Jordan’s leadership role. What do you see as the future for the various Lantern Corps, particularly the Green, in the absence of the Guardians of the Universe to moderate?

RV: Hal’s in a tight spot.  He’s been designated sole leader of the Green Lantern Corps, a job that used to be done by a group of immortal Guardians.  He’s just a guy from Earth.  And while he’s a great Lantern, fighting in the heat of the moment is far different from leading in a formal sense.  He’s hit some bumps along the way, but he’s going to need to figure this thing out, or the Corps won’t survive.  How he goes about doing that will show just how much he can grow as a character.  This is the next big hurdle in the career of Hal Jordan.

MSG: With the possibility of draining the universe of lantern energy top of mind throughout the corps now, can we expect to see response from some of the corners we haven’t as yet — the Sinestro Corps, Larfleeze, or the Indigo Tribe?

RV: Without going into detail, I can say that readers will definitely see some of those things.  It’s no accident that Parallax was the only entity to survive the refilling of the reservoir, and what that means for all the other entities will be revealed over time. 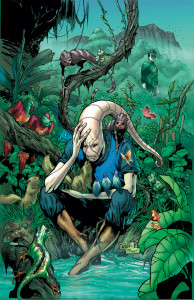 MSG: Any last words or special teases for the Comicosity audience?

CS: On the Red side, things will be heating up fast. As we now know, the one-time leader of the Reds, Atrocitus isn’t actually dead.  He’s out there in space, desperately seeking any route he can find to get vengeance against Guy Gardner, the person who killed him (for a while) and, to his mind, stole his Corps.  Guy’s blissfully unaware of all this – he’s just trying to protect his home sector and live his life. The chickens are going to come home to roost fairly soon, though, and it’s all building to one hell of a cosmic revenge saga.

RV: Coming up in Green Lantern #27, Hal will discover in the worst way possible that there are a tremendous amount of forces allied against the Corps.  There are subplots we’ve woven into the series that no one even realizes are subplots yet, and we’re going to pull on all those threads at once.  War is coming at a time when the Corps could really use some peace, so there isn’t going to be any rest for the weary.  Hal will have to dig deep to pull everyone through, and then after that . . . well, readers will never see what’s coming next.

Also, keep an eye on Mogo and Saint Walker.  That’s a duo to watch for.

The Green Lantern/Red Lanterns #28 flip book arrives in stores from on February 5, 2014. Priced at $2.99, this special issue will feature not one, but two full 20 pages stories. Both books ship monthly from DC Comics.