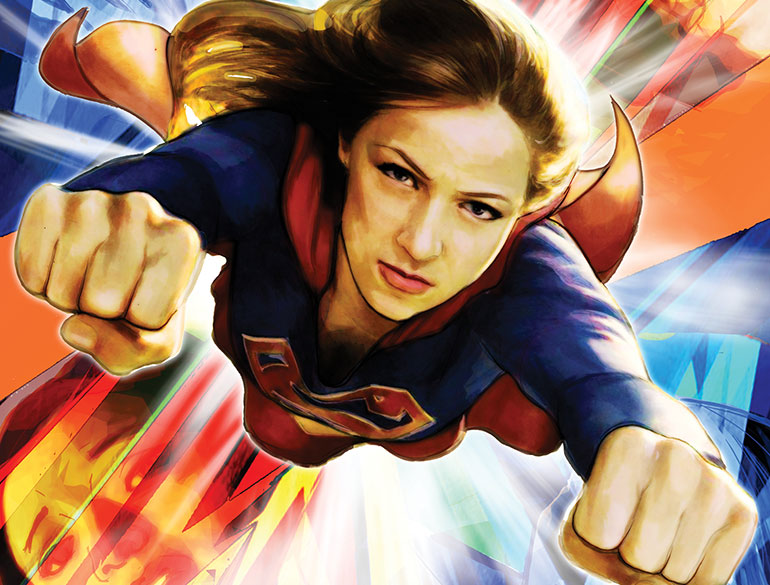 Rarely has a television property managed to swing a creator so ingrained in its protagonist’s history that you can’t possibly imagine anyone better for the job. But with Sterling Gates, longtime writer of Supergirl’s adventures in the DC Universe, taking on the Adventures of Supergirl from the CW… well, there’s a bit of magic there. As the final chapter of Gates’ series hits Monday, Comicosity sits down with the writer to get his feel for the character, what she means to him, and how she plans to defeat her newest nemesis: Facet. 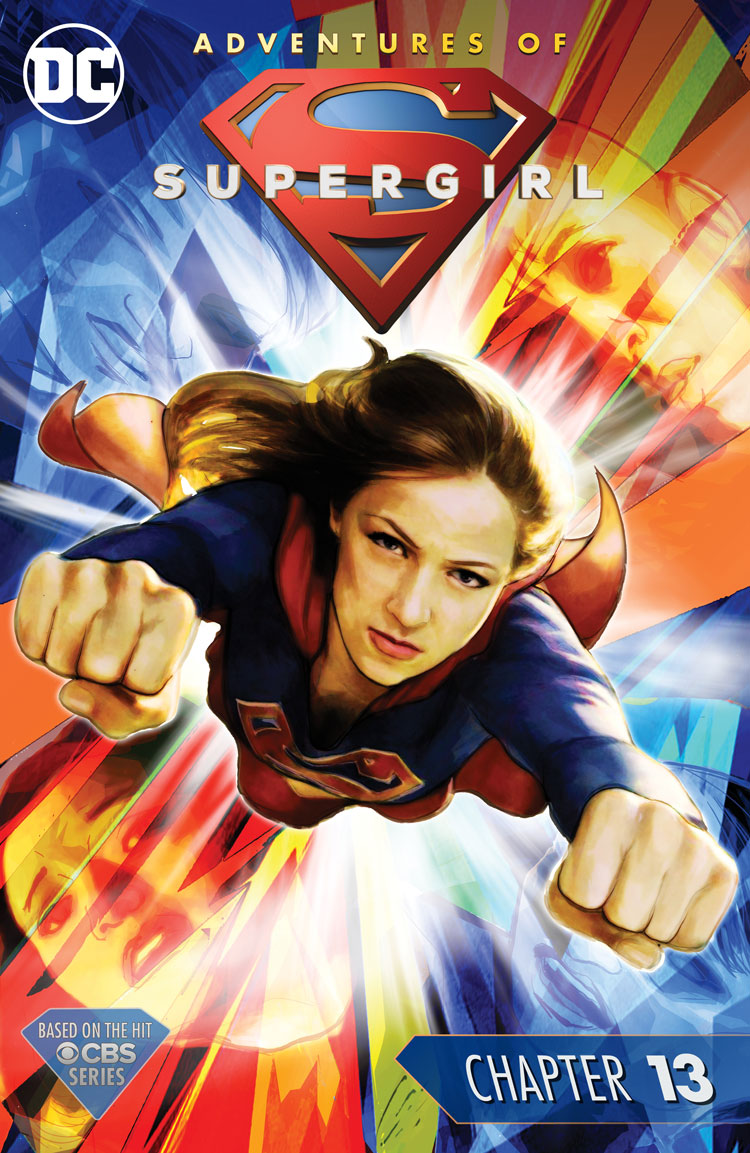 Matt Santori: Sterling, as we now reach the end of a second run on Supergirl, talk to me broadly about what Supergirl means to you personally.

Sterling Gates: Wow. That is broad!

The thing I love about Supergirl is her optimism. She is a character who is tragedy personified, right? Superman lost his planet when he was a baby. He had no relationship to that planet and only later discovered he lost his race and was the Last Son of Krypton. Batman watched his parents get gunned down in front of him by a criminal, and he swore from that point on that no child would have to endure what he endured. He puts on a bat-costume and fights crime.

Supergirl is both of those things times a million. In her most formative years — from the day she was born, until she was 13 or 14 — she grew up on Krypton. That was her world, literally and metaphorically. She knew the culture. She embraced the culture. She was Kryptonian.

Then her planet blew up and she and her family went to live on Argo City, which ends up being this life raft, floating in space, carrying Kryptonians. Then all THOSE people start to die off. So, they throw her in another escape pod and send her to Earth.

The bottom line is that Supergirl has endured two of the greatest losses anyone can experience — both watching your parents die right before your eyes and losing your planet, your people, and all its culture. Anything known about your planet, you now carry with you in a pod or in your memories.

Then she crashes on an alien planet, and in spite of all of that tragedy, she not only picks up and keeps going, but puts on a uniform and decides to use these new powers the Earth gives her to help others. And to be the living embodiment of hope.

She does not necessarily have to do that. Superman was raised here. He fights for truth, justice, and the American way because that’s what he’s known his entire life. She chooses to shoulder that burden because it feels to her like the right way to process that grief. And I think that’s a very inspiring message and a very interesting take on a character that’s been around for sixty-something years. 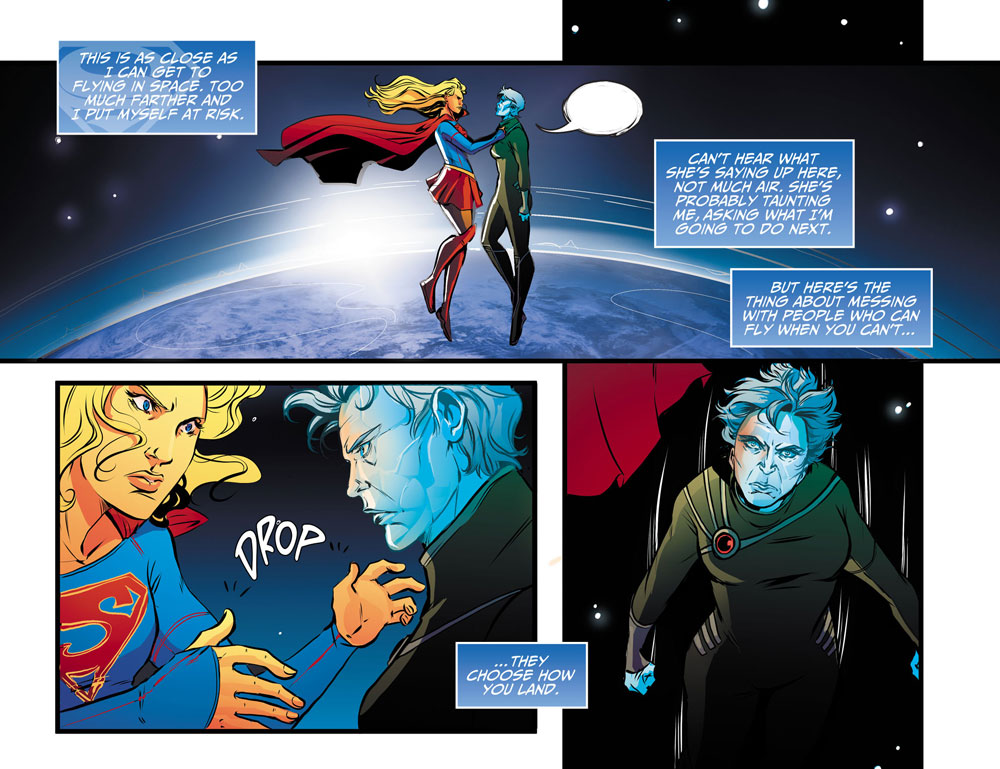 I’ve tried to figure out what is so appealing about Supergirl, and I think it’s the optimism. She’s suffered more than any other Super-character in history, and in spite of that, she channels that grief to create this extremely strong optimism. And I find that fascinating.

I think that makes her a more interesting character than Superman in many ways. That’s why whenever I have a chance to write that character, I say yes, because she does what we as humans can’t. She takes that grief, which has to be massive, and rather than crumbling, she does what a hero does. She goes to great lengths to help other people.

MSG: In this iteration, Supergirl actually has something Superman did, which is a foster family. That’s not something you had to work with in your last go-around with the character. How does that work for you and what do you think it adds to the character? 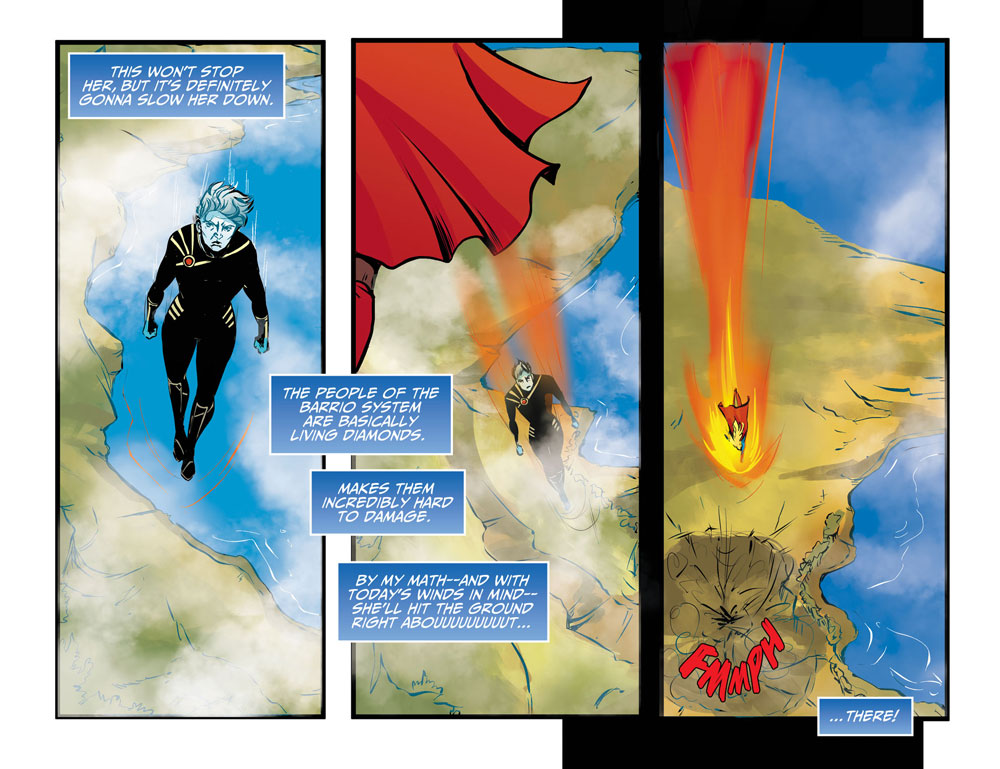 It gives us someone to bounce off of. So many Supergirl stories are her alone trying to figure things out. In New Krypton, we introduced Lana Lang as Supergirl’s sort-of big sister, so she would always have a human counterpart to go to for advice or talk through problems with. I thought it was really important, back in 2008, to give her someone who could help Kara understand humanity. She had only been on earth a couple of years and Lana felt like the perfect fit for that role to allow Supergirl to explore humanity and deal with her problems in a new way.

The show introduced Alex Danvers in a very similar way, made her a DEO agent — essentially made her an action movie star in her own right. If this was any other show, Alex would be the action star, right? She’s living a secret life that she can’t tell her family about; she works for a top secret government agency that hunts down aliens; she’s ultra-smart; she’s a neuroscientist, a xenobiologist — she’s an action movie star!

But Supergirl being around messes all that up, because Supergirl is the action star, and Alex ends up being the co-lead. What that offers you is the chance to bounce story back and forth between the two of them. And they have very, very different takes on the world. That allows you to write all sorts of different interactions between them, between them and other characters, and it’s awesome.

I really enjoy writing the two of them in any given scene, because Kara will always see the good and Alex will always see the bad. Alex is a little more world-weary. She’s seen some serious stuff, so she’s very pessimistic when it comes to catching some of these aliens. Supergirl is much more compassionate. She always tries to talk through things first and communicate first, because that’s just how Kryptonians work. 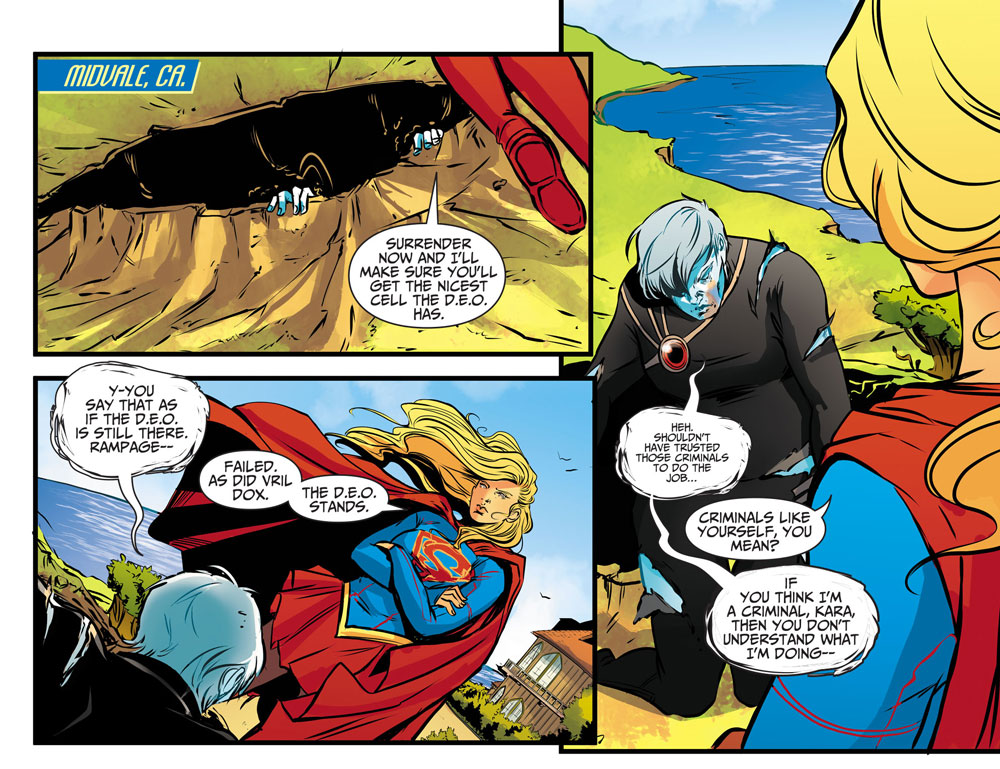 We do this really neat thing in Adventures of Supergirl Chapter 12, where they fight Rampage. Spoilers, but Alex goes up against Rampage and everything she normally does to go up against aliens fails. She uses guns, she goes and gets the cavalry, explosives. All the things they use to fight Rampage that they’d use on any other alien monster fails.

It’s only when Alex takes the Supergirl route by apologizing, owning up to her problems, and showing compassion toward Rampage that the situation diffuses. I thought that was a really important moment in our story: Alex accepting that Supergirl may be right in some ways. Maybe going in with your assault rifle blazing isn’t the best way to stop these misunderstood aliens.

Meanwhile, in Chapter 13, Supergirl has tried compassion and tried to appeal to Facet’s sense of reason. Facet has ignored all of that. So, it’s time for Supergirl to start using Alex’s tactics and really go in with guns blazing. And you’ll see on Monday how that turns out. 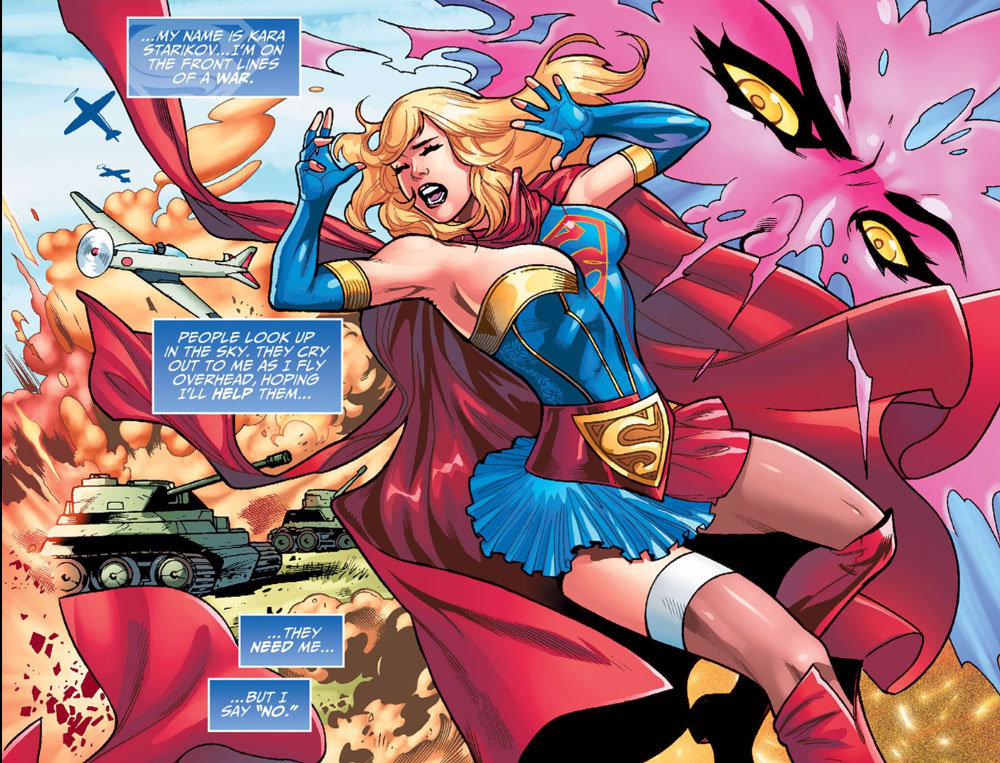 MSG: Tell me more about Facet. You’ve brought back all of these great Supergirl villains — Rampage, Vril Dox, and Psi in particular — but where did Facet come from?

SG: With Facet, I wanted to create a villain that could only be done in the show continuity — one that was tied intimately with Fort Rozz.

The conversations I’d had with the showrunners were very early. I think they had begun production on ten episodes by the time I started on this comic last summer. I wanted to do something set early in the season and tied into Fort Rozz, because that was uncharted territory in a lot of ways, at that point.

DC fans know the Barrio system is where all the diamond-based Green Lanterns like Chaselon come from. I wanted to make Facet a humanoid from the Barrio system who’s a living diamond, a thousand years old, and has plans within plans with plans. Once she got to Earth, Supergirl became her hope. Supergirl stands for the wrong kind of hope for Facet.

Facet buys into the idea that Allura is the supreme, all-powerful judge, so clearly her daughter is going to be the next generation and better than anyone ever. “I have to help shape that person,” she thinks.

That’s her goal, and it doesn’t go well for Facet. Supergirl doesn’t want to be her mother. That’s the fatal flaw in Facet’s plan.

But I wanted to create a brand new villain because one of the things I think is important when working on these shared characters is contributing new ideas and new characters. Yeah, of course I wanted to dust off some old villains, like Psi. 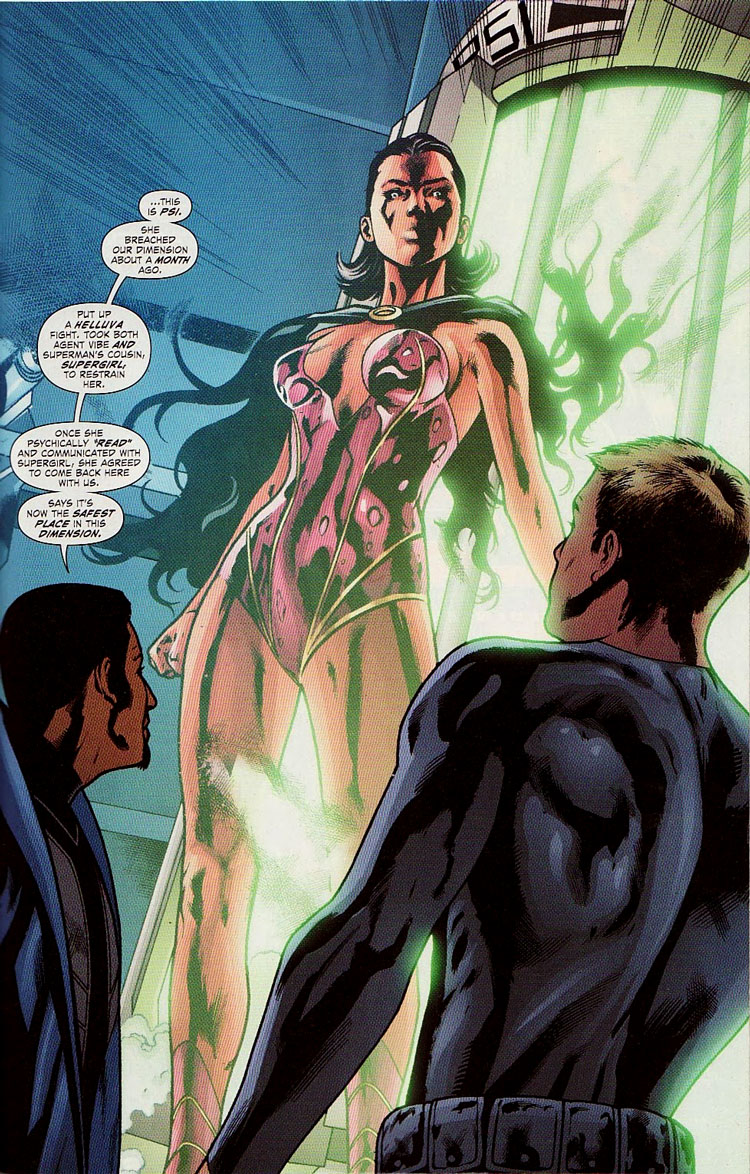 She’s an old villain I really loved that I felt like could use some updating — a psychic creature who’s not really a villain, but had some villainous tendencies. Doing a big dream story was a great way to bring her in.

With Vril Dox, I wanted a take on what people deal with in the 21st century, computers, and doxxing.

Rampage? I just love Rampage. I think she’s such a great visual and a fun, unpredictable, hulk-like character to throw into the mix.

It was important to me to dust off all of these old guys, but that the mastermind behind it all be someone brand new — someone that could only be done in the tv show continuity. 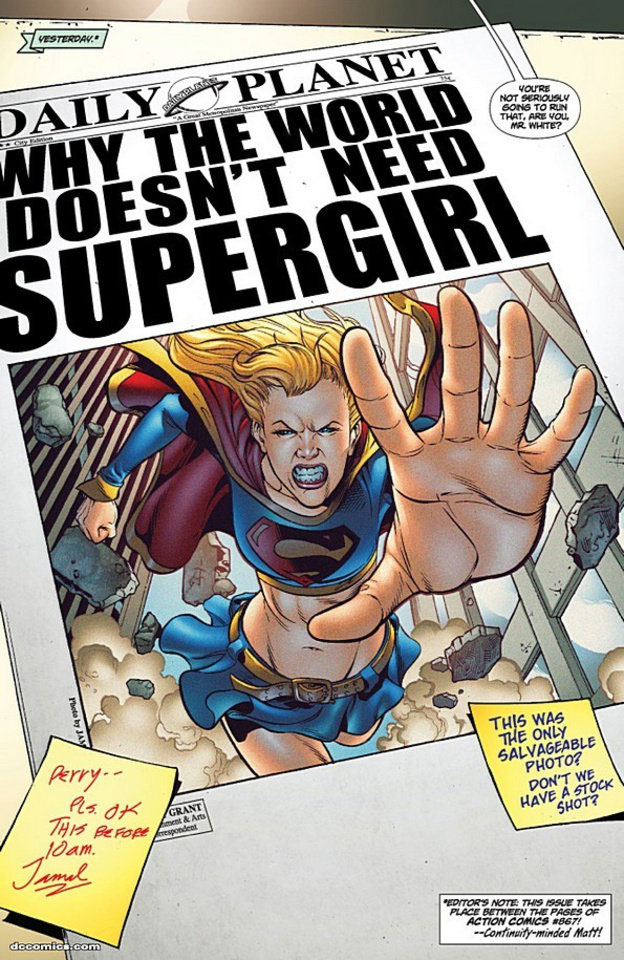 MSG: At the start, you mentioned Superman’s motto: Truth, Justice, and the American Way. How does that differ for someone like Kara, then, who’s coming from a very different cultural viewpoint?

SG: I think readers should check out chapter 13 on Monday. We put something into that chapter that no one’s ever done before. Having said all the above about Supergirl, if you’re looking for something different and new that relates, definitely check this out this digital issue.

I’m really happy people have gone on this journey with us. I didn’t know how people were going to take me coming back to the character, and I’ve been very overwhelmed by the positive reception to the series.

And I’ve been working with some of the best artists DC has. Cat Staggs has been doing our covers and they are incredible. Emma Viaceli is doing this last three-part story and she does just beautiful artwork. Bengal, Carmen Carnero, Pop Mhan, Emmanuela Lupacchino — all top notch, incredible artists who have contributed to this story. I am so thankful to them. And to the editors Kristy Quinn and Jess Chen who helped find and secure those artists for the story.

I’m just so grateful that fans have gone with us on this trip through some very dark places. I really hope people liked it. This character is so near and dear to my heart. She is important to me in a way that I don’t think anyone will ever understand, and so I am always thankful and excited to tell stories with her.

The final chapter of Adventures of Supergirl will be available for download Monday via the DC Comics App, Readdcentertainment.com, iBooks, comiXology.com, Google Play, Kindle Store, Nook Store, and iVerse ComicsPlus.